Development and evaluation of pH-dependent micro beads for colon targeting

The purpose of this research was to develop and evaluate multiparticulates of alginate and chitosan hydrogel beads exploiting pH sensitive property for colon-targeted delivery of theophylline. Alginate and chitosan beads were prepared by ionotropic gelation method followed by enteric coating with Eudragit S100. All formulations were evaluated for particle size, encapsulation efficiency, swellability and in vitro drug release. In vitro dissolution studies performed following pH progression method demonstrated that the drug release from coated beads depends on coat weights applied and pH of dissolution media. Mechanism of drug release was found to be swelling and erosion-dependent. The studies showed that formulated alginate and chitosan beads can be used effectively for the delivery of drug to colon and a coat weight of 20% weight gain was sufficient to impart an excellent gastro resistant property to the beads for effective release of drug at higher pH values.

There has been a considerable research for design of colonic drug delivery system. Colon targeting has been achieved by several ways, which include prodrugs, pH- and time-dependent systems. Polysaccharides such as chitosan, pectin, inulin, alginate, guar gum have been explored for their potential for colon specific drug delivery. To achieve successful colon drug delivery, a drug needs to be protected from degradation, release and/or absorption in upper portion of GI tract and then ensure abrupt or controlled release in proximal colon. Colon targeting is usually advised because of advantages i.e, reduced dosing frequency; achieve high concentration at distal gut for local treatment; chronotherapy and delivery of drug to a region that is less hostile metabolically [1].

Alginate is linear, naturally occurring polysaccharide extracted from brown sea algae. In presence of various divalent (Ca2+ and Zn2+) or trivalent ions (Al3+), an elastic gel is formed due to ionic interaction between the ions and carboxyl group, mainly of guluronic blocks. Chitosan, a naturally occurring polysaccharide has received major attention in drug delivery system. It is biocompatible and non toxic. Chitosan is weak cationic polysaccharide composed of (a (1→4) 2-amino-2deoxy-ß-D-glucan) obtained by alkaline deacetylaion of chitin [3].

Asthma is a chronic obstructive lung disease characterized by airways inflammation and hyper reactivity. In most patients, conditions worsen at night with acute exacerbation being in most common [4]. Clinical and epidemiological studies suggest that asthma is several hundred folds more likely at night than during day with disturbance of sleep. The heightened risk of asthma at night coincides with the trough of circadian rhythm. A colonic drug delivery system would be valuable when a delay in absorption of drug is therapeutically desirable in treatment of chronic conditions like nocturnal asthma, which coincides with trough of circadian rhythm [5].

The physiological changes in pH of gastrointestinal tract have been extensively exploited to target the actives moieties to colon. Methods based on pH sensitive delivery such as delayed onset dosage forms could be a simple and practical means for colon targeting. Polymer particularly Eudragit S100 have been investigated for colonic delivery. Since the pH of colon in normal subjects varies from 6.4±0.6 to 7.5±0.4, these polymers have been designed to be soluble at pH >7 [6].

The aim of present investigation was to work out feasibility of combination of multiparticulates and pan coating to produce pH sensitive micro beads of theophylline for colon targeting. The major objective was to modulate drug release from these coated multiparticulates to specifically target the nocturnal peak symptoms of asthma.

Alginate, chitosan beads containing theophylline was prepared by ionotropic gelation method. Theophylline was dispersed in sodium alginate (2% w/v) solution or chitosan (3% w/v) solution in suitable solvents (Table 1). The drug-polymer dispersion was dropped through a needle (#20) into agitated 5% w/v aqueous calcium chloride solution (100 ml) and 2% w/v aqueous solution of tripolyphosphate (pH adjusted to 5), respectively for alginate and chitosan. Beads were left for 30 min, and washed twice with distilled water and dried at 50º for 4 h and then at room temperature (25º) for 2 days for complete drying [7-9].

Theophylline was dispersed uniformly in sodium alginate (2% w/v) solution and ethylcellulose (2% w/v) was mixed and stirred for 30 min and then drop wise added to agitated 5% w/v calcium chloride solution (100 ml). Chitosan reinforced alginate beads were prepared by dispersing theophylline in sodium alginate solution (2% w/v). The solution was dropped through a needle (#20) into agitated 5% calcium chloride solutions (100 ml) with chitosan (0.5% w/v) already dissolved in acetic acid solution (1% v/v). Beads were left for 30 min, and washed twice with distilled water and dried at 50º for 4 h and then at room temperature (25º) for 2 days for complete drying [10,11].

The enteric coating of all the beads bearing theophylline was performed by spray coating in a conventional coating pan. In brief coating solution was prepared by mixing Eudragit S100 with acetone for 1 h using a stirrer. After an hour, triethyl citrate (TEC) 6% w/v was added and stirring was continued for 30 min. Coating was done with a pan rotating at 20 rpm, with an inlet air temperature 60 to 70º and outlet air temperature of 35 to 40º. The solution was sprayed at an atomizing air pressure of 2 bars. The coating was continued until the desired weight gain was achieved. A series of coated products with different film thickness were produced, quantified by the total weight gain (%TWG), by varying amount of coating solution sprayed [12].

The theophylline in the beads was determined by digesting the beads in PBS (pH 7.4) and 0.1 N HCl (pH 1.2), respectively, for sodium alginate and chitosan beads. The extracted drug concentration was determined spectrophotometrically (UV-1601, Shimadzu, Japan) at 272 nm for alginate beads and 269 nm for chitosan beads. The encapsulation efficiency of prepared hydrogel beads was calculated in terms of ratio of drug in formulation to amount of drug added [5].

In vitro drug release studies were performed using USP dissolution test apparatus (Apparatus 2). The dissolution studies were performed in 900 ml of dissolution medium, which was stirred at 100 rpm at 37±0.1º following a pH progression method i.e pH 1.2 for first 2 h, pH 6.8 for next 3 h and pH 7.4 for rest of studies. Aliquots was withdrawn periodically and replaced with fresh medium. Theophylline content in the aliquots was assayed spectrophotometrically (UV-1601, Shimadzu, Japan) at 269 nm for pH 1.2 and 272 nm for the rest of the samples [15].

Alginate and chitosan beads were prepared by dropping the solution of the drug alginate dispersion into calcium chloride solution, and for drug-chitosandispersion into tripolyphosphate solution, where beads were formed due to cross linking of alginate by calcium ions, and for chitosan with phosphoric ions. Preparation of beads by ionotropic gelation is based on the ability of various polysaccharides such as pectin, alginate, chitosan, and gellan to form a gel in the presence of multivalent ions. Beads can therefore be prepared simply by adding, drop wise, a dispersion of polysaccharide and material to be encapsulated into solution of multivalent ions. The contact of droplets with the ions results in instantaneous formation of spherical gel structures containing the material to be encapsulated uniformly dispersed throughout the polysaccharide matrix.

Alginate and chitosan micro beads were successfully prepared by ionotropic gelation method. The beads were coated with Eudragit S100 by spray coating in a conventional coating pan. The coated beads were found to be of spherical shape. Diameter of beads varies as shown in Table 2 for different formulations. The result indicates that as the amount of polymer (alginate and chitosan) increases, the size of beads proportionally increases.

Moreover, longer the cross linking time, lower the size of beads. The bead diameter decreased as the cross linking time was increased, because there is greater time for the cross linker to promote formation of cross links with chitosan molecules or alginate molecules and make a more compact mass. The longer the hardening time, the smoother and more spherical were the beads obtained. Coating thickness over drug bearing beads was obtained in terms of total weight gain (TWG) of beads after enteric coating with Eudragit S100 dispersion and their effect on In vitro drug release in simulated GI fluid was studied.

The effect of various formulations parameters on entrapment efficiency of prepared hydrogel beads are shown in Table 2. The entrapment efficiency of prepared beads varied from 63.77±1.41 to 81.58±1.81% for alginate beads and for chitosan beads it varies from 55.21±1.5 to 79.60±1.43%. Entrapment efficiency and drug content increased significantly with increasing polymer concentration (alginate or chitosan) as shown in Table 2. This is because the increase in polymer concentration resulted in formation of larger beads entrapping more drug. This result is well correlated with similar result reported earlier for alginate-chitosan beads of timolol maleate [16].

Swelling studies for coated beads was performed in three different pH (1.2, 6.8 and 7.4) simulating transition of beads in GIT. Swelling studies carried out shows that maximum swelling for all batches of beads is in simulated intestinal fluid (pH 7.4) as shown in figs. 1 to 4. The swelling of calcium alginate beads in phosphate buffer is related to Ca2+ and Na+ exchange. In initial phase Na+ ions present in phosphate buffer exchange with Ca2+ ions, bound to COO- groups of mannuronic blocks. As a result, an electrostatic repulsion between negatively charged COO- groups increases resulting in gel swelling. Exchanged Ca2+ ions precipitate in the form of insoluble calcium phosphate reflecting in slight turbidity of swelling medium. In the later phase of swelling, diffusion of Ca2+ from polyguluronate blocks cause loosening of tight egg-box structure and thus permit the penetration of additional amounts of media into the beads [17]. 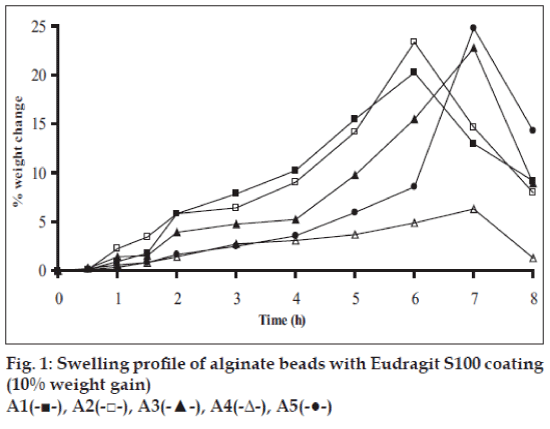 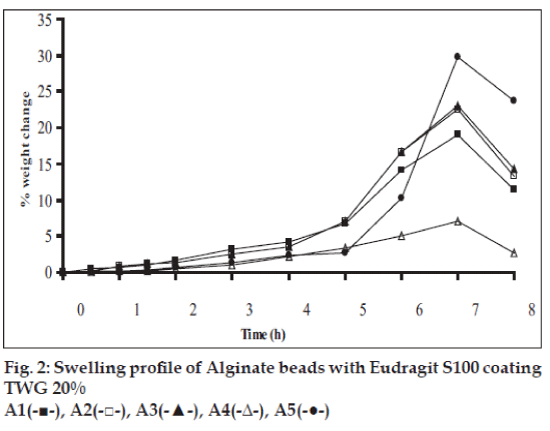 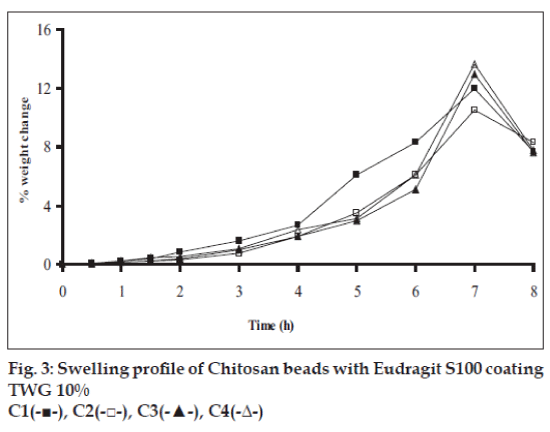 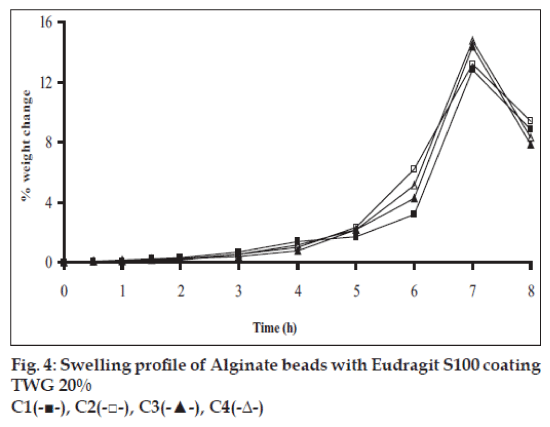 In case of chitosan beads, ionization of amine group on chitosan decreases with increasing pH proceeding to weaker cross linking density. At higher pH open porous structure with low density were also reported [18]. In case of ethylcellulose reinforced alginate beads the swelling was found to be to a lesser extent which is due to the hydrophobic nature of ethylcellulose.

In case of uncoated beads, nearly >70% of drug was released in initial 4 h of dissolution study. This situation is not acceptable for the drugs that are required to be released in colon. Therefore beads were coated with Eudragit S100 polymer to retard the release of drug until the pH reaches above 7.0.

In vitro release studies were carried out in order to evaluate effect of Eudragit S100 coat with an objective to release most of drug in the colon. The initial release of TH from coated hydrogel beads was low. However, some part of drug (10 to 15%) was released in initial 2 h from the beads having TWG 10%. In case of TWG 20%, very less amount of drug was found to be released (3 to 4%) which is less as compared to drug release from TWG 10%. Figs. 5 to 8 show the drug release from various formulations in different simulated GI fluids. 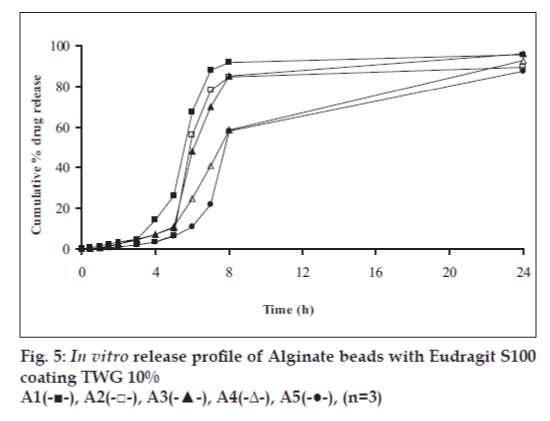 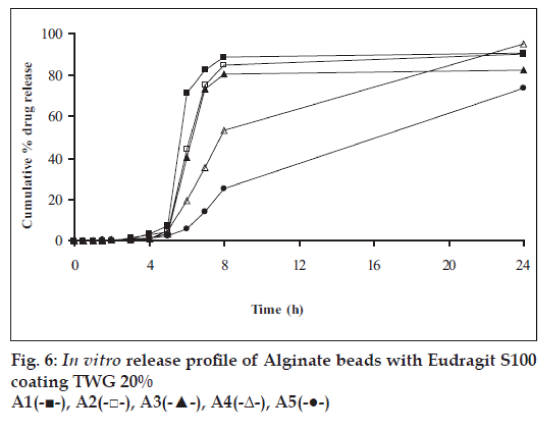 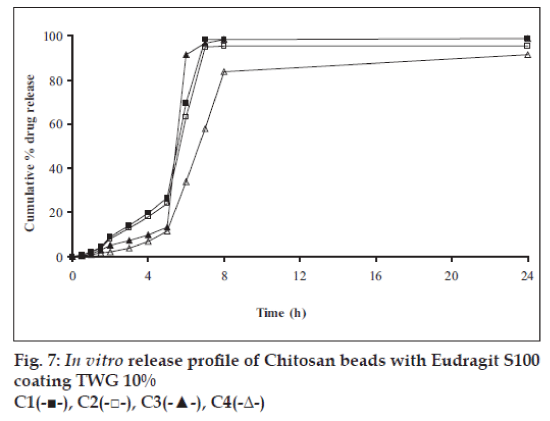 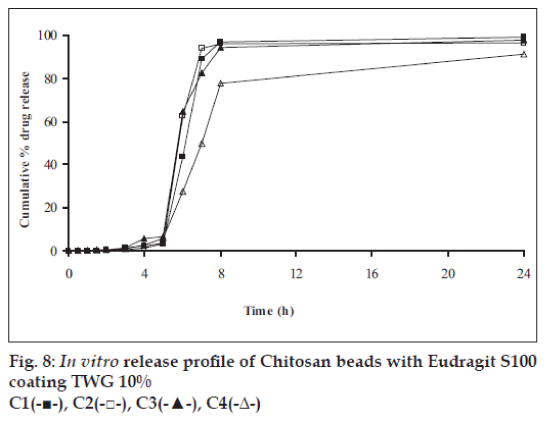 However, >80% of drug was released when pH was gradually raised above 7.0. The result indicates that drug was protected completely from upper GIT condition by a coating of Eudragit S100, because Eudragit polymer contain carboxyl group that ionize in an environment where pH is greater then 7. As ionization take place, integrity of film was disturbed and drug is released. At pH 7.4, membrane coating get dissolved and beads were exposed to dissolution media following which the polymer matrix swells and erodes releasing entrapped drug.

Results of release studies indicate that Eudragit S100 coated hydrogel beads offer a high degree of protection from premature drug release in simulated upper GIT conditions. A well coat of Eudragit S100 delivers almost intact beads to colon [19], an environment rich in bacterial enzymes that degrade the polysaccharides and allow drug release to occur at desired site and can be a potential system for delivery of theophylline in cases of nocturnal asthma.