The association of meloxicam and pridinol is indicated for treating muscular contractures and low back pain. A dissolution test for the meloxicam-pridinol combined tablet formulation was developed and validated, using a suitable HPLC method for simultaneously quantitating both dissolved drugs. The optimized conditions include the use of USP apparatus 2 at a paddle rotation rate of 75 rpm and 900 ml of 50 mM phosphate buffer (pH= 7.5) as dissolution medium, at 37.0±0.5o. The test, which demonstrated to be robust against small changes in bath temperature, paddle rotation speed and pH of the dissolution medium, was applied to two different brands of tablets; the corresponding dissolution profiles were constructed and both brands showed to dissolve at least 75% of the drugs at the 45 min time point.

The dissolution test is a simple and useful in vitro tool that can provide valuable information about drug release similarity among different batches (manufacturing reproducibility) and brands (product performance similarity) of a product, and clues about the biological availability of a drug from its formulation; therefore, it is considered as one of the most important quality controls of solid pharmaceutical dosage forms [1].

Meloxicam (MEL) is a non-steroidal antiinfl ammatory drug, which is known to preferentially inhibit the enzyme cyclooxygenase-2 (COX-2) over COX-1 [2]. The drug (fig. 1) is slowly but almost completely absorbed after oral administration [3,4]; according to the biopharmaceutics classification system [5], it can be included among the Class II compounds (low solubility and high permeability). Because of its effectiveness and good overall safety profile [6], MEL is prescribed for treating various arthritic and inflammatory conditions, including rheumatoid arthritis, osteoarthritis, ankylosing spondylitis and other joint diseases [7]. Pridinol mesylate (PRI) is a central anticholinergic drug [8], employed as a myotonolytic and spasmolytic agent in antistress therapy [9]. The drug is sparingly soluble in water. The pharmaceutical association of MEL and PRI is indicated for treating muscular contractures and low back pain [8,10]. 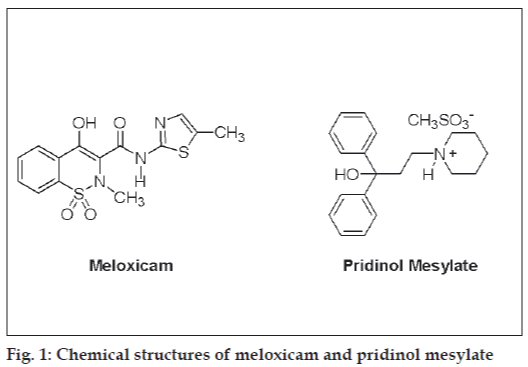 The solubility characteristics of MEL have been shown to result in poor dissolution, as well as in variations of its bioavailability [13], and have been linked to diminished tolerability and some gastric irritation upon oral administration [14]. Due to the importance of the problem, several solubilization and dissolution studies have been reported for this drug [15-18]. Meloxicam is official in the British Pharmacopoeia [19]; on the contrary, PRI has not been included yet in the most consulted Pharmacopoeias. A literature search revealed the lack of a validated dissolution test for the combined MEL-PRI formulation, and evidenced that published examples of validated dissolution tests for pharmaceutical associations are scarce [20-22]. Therefore, herein we report the development and validation of a dissolution test for tablets of the MEL-PRI association.

All experiments were performed with pharmaceuticalgrade MEL and PRI (Saporiti, Buenos Aires, Argentina), analytical-grade reagents and HPLCgrade solvents. Buffer solutions were prepared with double distilled water. All dilutions were performed in standard volumetric fl asks. Solvents and solutions were fi ltered through 0.45 μm nylon fi lters before use. The pharmaceutical preparations, declaring to contain 15 mg MEL and 4 mg PRI, were obtained from local drugstores. Optimization experiments were carried out with Brand 1.

Standard and working stock solutions of MEL and PRI

Optimization and validation of the dissolution test

Optimization was carried out employing 900 ml of 50 mM phosphate buffer as dissolution medium per vessel, thermostatized at 37.0±0.5º. Six tablets were processed in each dissolution experiment. The effect of the pH of the dissolution medium was studied at different levels (5.5, 6.5, 7.5 and 8.0). The effect of the paddle rotation speed was examined at 50, 60 and 75 rpm. Sink conditions were verified through the analysis of dissolution samples taken from a vessel, where amounts of the drug equivalent to three times those in the tablet (45 mg) were added.

Precision was studied at the instrumental (HPLC) precision, method repetability and intermediate precision levels. Instrumental precision was determined as the relative standard deviations (RSD) of the drug recoveries of triplicate injections of combined standard samples of the analytes at 50, 90 and 130 % concentration levels. Overall method repeatability, including tablet manufacturing variability, was determined as the RSD of the amounts of dissolved drugs from six tablets after 10, 30 and 45 min of dissolution time. Intermediate precision of the dissolution test was demonstrated by analysis of two sets of six tablets each, from the same lot in two different days, with independently prepared standard solutions, dissolution media and mobile phases. The robustness of the test was examined against small but deliberate variations of critical parameters, including bath temperature (35.0-39.0 º), pH of the dissolution medium (7.3-7.7) and paddle rotation speed (71-79 rpm).

After completing the dissolution procedure, the solutions were stirred slightly at 37±0.5° for 3 h (24 h for the experiment at pH= 7.5). Aliquots of each dissolution medium were withdrawn at the initial time and then regularly up to 3 or 24 h. Samples, injected in triplicate, were evaluated against a freshly prepared standard solution of the analytes.

Factorial designs are known to provide good amounts of information with a reduced set of experiments; therefore, they are usually preferred to the more time-consuming batch to batch optimization strategies. However, owing that dissolution tests should be performed in runs of at least 6 units, in order to take into account variations in the manufacture of the dosage form, and since the dissolution station architecture prevents bath temperature and agitation speed to be set independently for each vessel, the dissolution stage of the test was optimized and validated employing a step-wise strategy.

In order to optimize the dissolution test, initial conditions were set in agreement with currently accepted practices [24,25]. The paddles setup was selected due to its inherent advantages over the basket system [26]. Selection of a proper dissolution medium was carried out were taken into account drug solubilities. Meloxicam is practically insoluble in water [19] and at pH values lower than 5.5, its solubility decreases sharply (2.1 mg/l at pH= 5 and 0.5 mg/l at pH= 4), hindering the attainment of sink conditions and the test itself [14]. This is because under these conditions MEL is a zwitterion (pKa= 1.09 and 4.18) [14], which has a large intramolecular multipole moment [27], due to the presence of oppositely charged groups within the molecule. On the other hand, dissolution media with pH higher than 8.0 are not recommended.

The experimental results revealed that, regardless of the paddle rotation speed, the dissolution rate of MEL increased with increasing the pH of the medium (fig. 2). However, it was observed that the generic dissolution specifi cation for conventional-release oral dosage forms of the BP (‘no less than 75 % of the labeled amount in 45 min’) [19], was met only at pH values of 7.5 and higher, and more confi dently at 75 rpm (fig. 2a). On the other side, PRI evidenced a smaller but opposite trend, showing a slight increase in the amounts being dissolved with the increasing acidity of the dissolution medium (fig. 2b). The improved dissolution of PRI at lower pH is probably due to the protonation of its piperidinic nitrogen (pKa ≈ 9.7). However, since dissolution rates of PRI higher than 75% at 45 min were attained under all test conditions, it was concluded that dissolution of MEL conditioned selection of the medium and that a pH value of 7.5 was the most suitable for the proposed method.

When the effect of paddle rotation rate was examined at pH 7.5, dissolution differences between 50 and 60 rpm were noticeable for both drugs (fig. 3), with increasing rotation speeds favouring dissolution. Interestingly, drug release rates were found statistically similar at 60 and 75 rpm, when a t-test comparison of the means was performed at each time point. However, it was concluded that 75 rpm was the best suited since it provided more consistent results. This rotation speed is usually employed for testing drug combinations [24]. 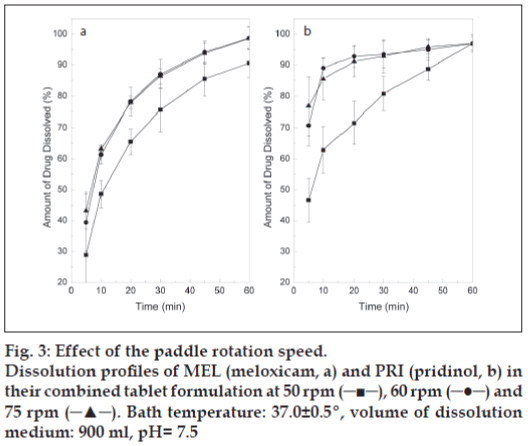 The suitability of the dissolution stage of the test was demonstrated employing a valid HPLC method for the simultaneous determination of MEL and PRI [23]. The small pH differences between the dissolution media and the mobile phase demonstrated to have no effect on peak shapes, retention times and area under the curves of the analytes. Meloxicam, the least soluble of both drugs, exhibits a water solubility of 7.9 mg/l in its micronized form [15]; at pH= 8, MEL dissolves up to 1550 mg/l [14]. At the optimized dissolution pH the drug attained sink conditions [28,29].

In addition, samples’ stability was evaluated in order to guarantee their chemical integrity during the analysis time. Deviations greater than ±2% from the initial analysis were not observed, and both analytes were stable for at least 3 h at pH= 5.5, 6.5 and 8.0, and at least 24 h at pH= 7.5. Furthermore, no degradation products were detected, confi rming the stability of the samples.

Method precision was considered satisfactory, as stemmed from the results shown in Table 1. The absolute deviations among corresponding mean amounts of the dissolved drugs did not exceed 10% at time points below 85% of dissolution and were less than 5% for time points above this level, fully complying with typical requirements [24].

Table 1: Precision of the dissolution test

When the robustness of the method was examined, not unexpectedly, higher data dispersion was observed at the initial times (fig. 4); however, these achieved average RSD values of 4.5 and 2.7% for MEL and PRI, respectively, at the 45 min time point, being considered satisfactory and complying with general offi cial specifi cations (< 10%) [24]. Except for the dissolution of MEL at 35º (fig. 4a), which was noticeably lower than at slightly higher temperatures, probably due to a marked temperaturedependent solubility of the drug, the results were considered satisfactory. No significant differences were found among the amounts of dissolved drugs at the pre-specified time points under the different temperatures, with respect to those corresponding to the optimal experimental conditions, confi rming the robustness of the test at a ±1º level. In addition, the optimized conditions proved to be robust with regards to pH of the dissolution medium and paddle rotation speed. 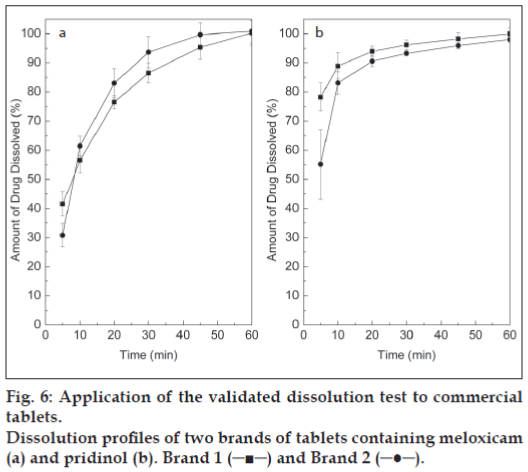 Figure 6: Application of the validated dissolution test to commercial tablets.
Dissolution profi les of two brands of tablets containing meloxicam (a) and pridinol (b). Brand 1 (─■─) and Brand 2 (─●─).

For routine work, however, a single point determination of the amount of the dissolved drugs at a pre-specified time is considered satisfactory. According to the BP, a suitable level is Q= 75% of dissolved drug after 45 min [19]. Fig. 6 evidences that under the proposed test conditions, both brands fully complied with this typical specifi cation.

In conclusion, the dissolution stage of a dissolution test for meloxicam and pridinol mesylate in their combined tablet formulation has been developed and validated. The optimum conditions found were 900 ml of 50 mM phosphate buffer (pH= 7.5) as dissolution medium in a bath preheated at 37.0±0.5º, employing USP apparatus 2 with a paddle rotation speed of 75 rpm. Attainment of sink conditions as well as method precision and robustness were demonstrated and the dissolution samples evidenced to be stable for 24 h. Simultaneous analyses of the dissolved drugs were performed employing a suitable HPLC method. Under these validated conditions, two commercial brands of the MEL-PRI association were tested, and their dissolution profiles were also constructed and compared. Both brands demonstrated to release at least 75% of MEL and PRI at the 45 min time point. Because there is no offi cial monograph for dissolution testing of the meloxicam-pridinol combined tablet formulation, the validated dissolution test, which demonstrated to be suitable for its intended purpose, may fi nd use in routine quality control work of this pharmaceutical association.