Emtricitabine is a nucleoside reverse transcriptase inhibitor (NRTI) for the treatment of HIV infection in adults and children. This drug is most widely used in antiviral therapy. It is indicated in combination with other antiretroviral agents to treat HIV infection [1,2]. Chemically, emtricitabine is 4-amino-5-fluoro-1- [(2R,5S)-2-(hydroxymethyl) -1,3-oxathiolan-5-yl]- 1,2-dihydropyrimidin-2-one (Figure 1). It is one among the list of most essential medicines in health system, according to the World Health Organisation [3]. Several analytical methods using Reversed-phase highperformance liquid chromatography (RP-HPLC), UV and Liquid chromatography-mass spectrometry (LCMS) were reported for the estimation of emtricitabine in bulk, formulations and biological samples like human plasma/serum [4-6]. Fluorimetric method for the estimation of emtricitabine in plasma samples was also reported [7]. Most of the developed methods were robust and accurate. Although these methods have proven to be good for the estimation of emtricitabine, till date there is no colorimetric method for its estimation has been reported. A colorimetric estimation method for emtricitabine can be developed due to its free amino functional group present at 4th position of pyrimidine ring. In the present work, we have focussed on development of colour complexes, which are stable and their absorbance is linear with concentration. Diazonium salts are involved in the substitution, coupling and replacement reactions. Azo dyes have been prepared using this process [8]. The temperature should be maintained and the solutions should be freshly prepared because the diazonium salts are very unstable and tend to be explosive as solids [9-11]. The present colorimetric method would be efficient and simple for the estimation of emtricitabine alone in bulk and pharmaceutical formulation.

The primary amino group present in the emtricitabine nucleus reacts with sodium nitrite (NaNO2) in the presence of hydrochloric acid (HCl) at 0-5°, to give a diazonium salt. This diazonium salt when reacted with β-naphthol followed by addition of sodium hydroxide (NaOH) produced a reddish brown colour complex. The reaction was depicted in Figure 2. 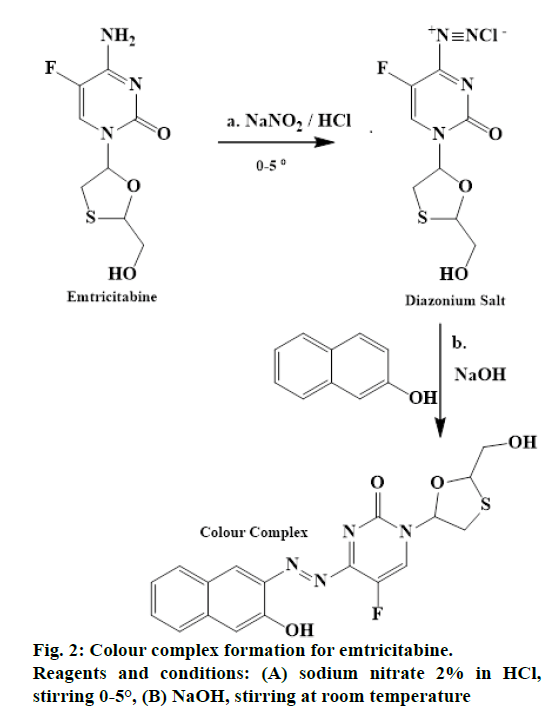 One hundred milligrams of emtricitabine was accurately weighed and transferred into a 100-ml volumetric flask, dissolved and the volume was made up with distilled water to obtain a final concentration of 1000 μg/ml.

From the stock solution, 100 μg/ml concentration was prepared. From this, 1 ml was transferred into a 10 ml volumetric flask to which 1 ml of 10% NaNO2 and 1 ml of 5% HCl was added at 0-5° with stirring. To this solution, 1 ml of 0.2% β-naphthol in 5% NaOH was added and mixed. A reddish brown colour was formed after 1 min. The resultant solution was scanned under the wavelength range from 400 to 800 nm to obtain the absorption maximum (λmax) at 559 nm.

Several concentration ranges were prepared and performed the reaction. But the most stable and detectable absorbance was observed with the concentration range from 100 to 500 μg/ml, prepared from the stock solution. From each concentration, 1 ml was transferred into 10 ml volumetric flasks and was diazotised at 0-5° with stirring and reacted with β-naphthol in presence of NaOH to give colour complex.

Preparation of a calibration graph

Absorbance of the above solutions was measured at 559 nm. A calibration graph of concentration versus absorbance was plotted. The drug colour complex has followed the Beer’s Lamberts law in the concentration range of 100-500 μg/ml. Regression equation and correlation coefficient was determined.

Table 1: Effect of temperature on the linearity of colour complex

Effect of time on the stability of colour complex formed was studied with increase in time. The absorbance values were measured at every 5 min interval maintaining the conditions. The change in absorbance values and linearity with respect to the time were tabulated in Table 2.

Table 2: Effect of time on the linearity of colour complex

3-methyl-2-benzothiazolinone hydrazine hydrochloride (MBTH), 1,2-naphthaquinone -4-sulfonate sodium (NQS), Bratton Marshal (BM) and β-naphthol were studied for the colour complex development. Among the reagents used, β-naphthol was found to form most stable coloured complex. The other reagents used were not able to produce colour complexes with the emtricitabine with good stability.

The effect of the concentration of the reagent (β-naphthol) on colour complex development was studied varying the concentrations from 0.1, 0.2, 0.4, 0.5, 1 and 2% of reagent solution were studied and tabulated in Table 3.

Table 3: Effect of reagent concentration on the linearity of colour complex

The assays of commercial tablets procured were used for the assay. The contents of 20 tablets were taken and finely powdered. Weighed accurate tablet powder equivalent to 100 mg of emtricitabine and transferred to 100 ml volumetric flask and diluent was added. The solution is sonicated for 15 min. The volume is made up with same diluent and mixed well. The solution was filtered through a membrane filter of 0.45 μm and discarded the first 2 ml. This is used for the assay by following the procedure described. The amount of drug was calculated from the calibration curve.

The presence of free primary amine group in emtricitabine is a reacting group to develop colour complexes, which led to the development of colorimetric estimation. The reaction of primary aromatic amine with nitrous acid, obtained from sodium nitrite and hydrochloric acid leads to formation of diazonium salt under cold conditions. This diazonium compound is unstable and easily reacts with various reagents and develops colour complexes. During the initial phase of work, several reagents were used for colour development. Except β-naphthol, the other reagents used could not able to develop the colour. In the present work the reaction conditions necessary for estimation of drug during the reaction and after the colour complex formation were studied. The initial concentration range for the drug was estimated. The concentration range of 100-500 μg/ml was found to possess good linearity and followed Beer’s Lambert’s law. The colour complex formed has shown its absorption maxima at 559 nm in the visible region. The effect of temperature was determined for the stability of colour complex with an interval of 5° from 5 to 25° (room temperature). The stability of the colour complex developed with respect to time was also determined by measuring the absorbance values with an interval of 5 min from 5-30 min. From the data it is observed that the time and temperature to be maintained for the estimation are within 15 min and not more than 15°, respectively. The data have shown the good conditions for colour complex stability. The concentration of the reagent for the colour complex formation played a vital role. Concentrations of 0.1, 0.2, 0.4, 0.5, 1 and 2% β-naphthol were prepared and used for the study. Increasing the concentration of the reagent resulted in the formation of a precipitate. The ideal concentration for the colour development with good absorbance values was found to be 0.2% of the reagent. The diazotisation reaction was performed at 0-5°. Changes in the conditions have decreased the absorbance values and affected the linearity. The method developed was validated using different parameters like linearity, robustness and ruggedness. The parameters involved are changed in wavelength, change of analyst and change of instrument. All the validated parameters have shown good %RSD (≤2) within the limits as per the International Conference on Harmonisation (ICH) guidelines [12]. Parameters like inter-day and intraday precision could not be performed due to the instability of the formed colour complex. The method was used for the determination of emtricitabine in pharmaceutical tablet dosage form and found to be effective in quantitative estimation. In the assay performed, the percent of drug in tablets was found to be 98.46%. Thus, the results obtained for the proposed colorimetric method confirms the suitability for estimating pharmaceutical tablet dosage form. The capability of the method developed was complementary to each other in analytical conditions. Hence, it is regarded as a simple and sensitive method for the estimation of emtricitabine in bulk and single pharmaceutical tablet dosage form. The developed colorimetric method was validated according to ICH guidelines and was found to be applicable for the routine analysis of emtricitabine. The proposed colorimetric method was first of its kind for Emtricitabine. Still more effective easy methods could be developed. The present colorimetric method is simple, sensitive and reliable. This method was specific while estimating the analyte from tablets without interference of excipients and other additives. Hence, this method can be used for the estimation of emtricitabine in bulk samples and tablet formulation.