A rapid, sensitive and specific reversed-phase high performance liquid chromatographic method with diode-array detection has been developed and validated for the determination of hydroxybenzene (0.494%, w/w) in a commercially available cream pharmaceutical formulation. Isocratic chromatography was performed on a C18 column with methanol-water 60:40 (v/v) containing 0.1% phosphoric acid (v/v) as mobile phase at a flow rate of 1.0 ml/min. UV detection was at 254 nm. Linearity of the method was excellent (r 2 = 0.9999). The relative standard deviation values for intra- and inter-day precision studies were < 1% and the recovery of hydroxybenzene was >99%. The limit of detection and quantitation for hydroxybenzene was found to be 13.5 η g/ml and 2 μg/ml, respectively. The method was also validated for specificity and robustness. The method was found to be robust and can be reliably used to determine the hydroxybenzene content of marketed formulations.

Hydroxybenzene is widely used in the preparation of drugs, cosmetics including sunscreens [1], hair dyes, and skin lightening preparations [2]. It is the starting material in the medicinal formulation of aspirin, herbicide, creams and synthetic resins. Hydroxybenzene belong to a family of compounds especially harmful for the environment, owing to their toxicity and carcinogenic effect [3]. This compound can be the source of serious health hazards if released into the environment through accidental spillage or poor disposal [4-6]. Recently, the determination of such phenolic compounds has been paid much attention, and verities of analytical methods have been reported. The hyphenation of gas chromatography (GC) and mass spectrometry (MS) has proven powerful for phenolic compounds assay [7,8], but the cost is generally high. For only GC based analysis, the poor polarity and insufficient sensitivity of hydroxybenzene are troublesome [9-12] so the chemical derivatization, such as silylation [13] and estrifi cation [14] is necessary, which is time-consuming and costly. The objective of this study was therefore to develop a simple, sensitive, robust and precise reversed-phase high performance liquid chromatography (RP-HPLC) method for the analysis of hydroxybenzene in pharmaceutical cream formulation without derivatization process.

Today, RP-HPLC is the most popular analytical technique for separating complex mixtures in the chemical, pharmaceutical and biotechnological industry. RP-HPLC is the opposite of normal-phase chromatography, with a nonpolar stationary phase and a polar, largely aqueous mobile phase. The most common stationary phases used are octadecyldimethyl (C18) phases with silica as the solid support. Silica has a small pH range (3 to 8) where mixtures can be separated without degradation of the column performance. Above pH 8, silica supports dissolve and destroy the column. Below pH 3, the silicon-carbon bond is cleaved, and the column is destroyed. The separation is achieved by analytes having different interactions with the stationary phase. In RP-HPLC, solutes are separated using their hydrophobicity. A more hydrophobic solute will be retained on the column longer than a less hydrophobic one. Also, polar solutes will interact with the silica surface to cause peak tailing. The mobile phase is one of the two components involved in the separation process. Water is generally one of the components of a binary mixture in RP-HPLC. Water is considered to be the weak component of the mobile phase and does not interact with the hydrophobic stationary phase chains.

The most popular organic modifi ers used in RP-HPLC are methanol and acetonitrile. The organic modifi er is the strong solvent in the mobile phase. The higher the concentration of organic modifi er, the less retention an analyte will have. There is no doubt that, also today LC-UV diode-array detection (DAD) plays an important role (detection and peak-purity) in many research and development studies, and for a wide variety of routine analyses. The RP-HPLC method reported in this study was validated in accordance with the International Conference on Harmonization (ICH) guideline [15] and best practice [16,17]. Specifi city, linearity, precision (repeatability and intermediate precision), accuracy, robustness, limit of detection and limit of quantitation were evaluated.

HPLC separation of hydroxybenzene was carried out on a Spherisorb C18 column by an isocratic elution with methanol-water (60:40, v/v) containing 0.1% phosphoric acid (v/v). The fl ow rate was constant at 1.0 ml/min and the column temperature was at room temperature (24±1°). The UV wavelength was set at 254 nm. No interference from diluents, impurities, or excipients present in the pharmaceutical formulation was observed at this detection wavelength. Before each run LC column was equilibrated with the mobile phase for about 15 min. A sharp, symmetrical peak was obtained for hydroxybenzene when analyzed under these conditions (fig. 1a). This retention time enable rapid determination of the drug, which is important for routine quality control analysis. Use of an un-buffered mobile phase is another advantage of the proposed method, because buffers reduce column life. Also sample preparation is simple and no dramatization process required.

System suitability test was established from six replicate injections of a solution containing 40 μg hydroxybenzene/ml. The percent relative standard deviation (RSD) of the peak area was calculated. The peak retention factor (k) for drug was calculated from k = (tR – t0)/t0, where tR and t0 are the retention times of the peak of interest and the solvent front, respectively. A useful and practical measurement of peak shape, the peak asymmetry factor, As, was calculated at 10% of peak height. Column plate number was determined using the formula, N = 5.54(tR/wh)2, where wh is the bandwidth at 50% of peak height. The proposed method met these requirements within the United States Pharmacopoeia (USP) accepted limits (Table 1) [18]. The stability of hydroxybenzene in solution was investigated in the method development phase. Six solutions containing 40 μg/ml of hydroxybenzene were tested. Analysis was performed after preparation and at 3 and 5 days thereafter. The solutions were stable during the investigated 5 days and the RSD was < 1.0% for retention time (min), peak area and height. Standard solutions stored in a capped volumetric flask on a laboratory bench under normal lighting conditions for 5 days, were shown to be stable with no signifi cant change in hydroxybenzene concentration over this period. 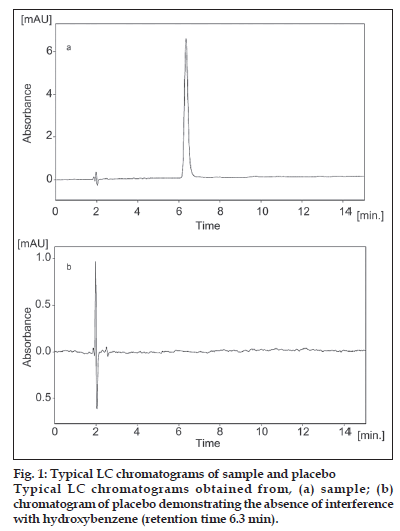 Appropriate amounts of hydroxybenzene stock solutions (250 μg/ml) were diluted with mobile phase to give concentration of 2, 20, 30, 40, 50, 60 and 80 μg/ml. Each solution was injected in triplicate and calibration plot was prepared. Linearity was evaluated by linear least-squares regression analysis. Good linearity was observed over the concentration range evaluated (2-80 μg/ml). The slope and intercept of the calibration plot (±standard deviation, n= 3) were 158.45+1661.8 and the correlation coefficient was 0.9999 (Table 2). The validity of the assay was verified by analysis of variance. This revealed the regression equation was linear (Fcalculated = 13,427 > Fcritical = 4.96; P = 5%) with no deviation from linearity (Fcalculated = 0.14 < Fcritical= 2.68; P = 5%).

Table 3: Recovery Studies Of Hydroxybenzene From Samples With Known Concentrations.

a Sem is the standard error of the mean, The recommended chromatographic conditions were Spherisorb C18 (250×4.6 mm, 5 mm) column with methanol-water 60:40 (v/v) mobile phase at a flow rate of 1 ml/min, UV detection at 254 nm and column temperature 24°.

Table 5: Robustness Of The Method.

The precision of the method was investigated with respect to repeatability and intermediate precision. The repeatability (intra-day precision) of the method was evaluated by assaying six replicate injections of the hydroxybenzene at 100% of test concentration (40 μg/ml) on the same day. The %RSD of the retention time (min) and peak area were calculated (Table 2). Intermediate precision (inter-day precision) was demonstrated by two analysts using two HPLC systems and evaluating the relative peak area percent data across the two LC systems at three different concentration levels (50%, 100%, and 150%) that cover the assay method range (2-80 μg/ml). The %RSD across the systems and analysts were calculated from the individual relative percent peak area mean values at the 50%, 100%, and 150% of the test concentration. The intra-day (n= 6) and inter-day (n= 3) %RSD are given in Table 2. All the data are within the acceptance criteria of 2%.

Accuracy of the method was evaluated by fortifying a hydroxybenzene sample solution (80 μg/ml) with three known concentrations of reference standard (30, 40, and 50 μg/ml). Percent recoveries were calculated form differences between the peak areas obtained for fortified and unfortified solutions. Good recoveries were obtained (Table 3). No significant differences were observed between amounts of hydroxybenzene added and the amounts found (p <0.05).

Injections of the extracted placebo were performed to demonstrate the absence of interference with the elution of the hydroxybenzene. This result demonstrates (fi g. 1b) that there was no interference from the other materials in the cream formulation and, therefore, confi rms the specifi city of the method. The forced degradation studies were also applied to hydroxybenzene reference standard at a concentration of 40 μg/ml to verify that none of the degradation products interfered with quantitation of the drug. Hydrolytic degradation was studied by heating the drug under refl ux at 80° in 0.1 M hydrochloric acid and 0.1 M sodium hydroxide for 4 h. The samples were then cooled to room temperature and neutralized. Oxidative degradation was studied by treating the drug with 3% hydrogen peroxide at room temperature (24±1°) for 4 h. Solutions containing 40 μg/ml of each degraded sample were prepared and injected in triplicate. Thermal degradation was studied by heating samples in oven at 80° for seven days. No signifi cant degradation was observed under any stress conditions studied (Table 4). In addition, DAD data were collected for all the degradation conditions studied, with the purpose of peak-purity evaluation. These analyses showed that no impurities or degradation products were coeluting with the hydroxybenzene peak.

Robustness of the method was evaluated by the analysis of hydroxybenzene under different experimental conditions such as changes in the composition of the mobile phase, column temperature, flow rate and different columns. The percentage of methanol in the mobile phase was varied ±2%, the column temperature was varied ±3° and, the flow rate was varied ±0.2 ml/min. Their effects on the retention time (tR), asymmetry factor (As) at 10%, recovery and repeatability were studied. Deliberate variation of the method conditions had no signifi cant effect on assay data or on chromatographic performance, indicating the robustness of method and its suitability for routine use and transfer to other laboratories. The results from robustness testing are presented in Table 5.

A RP-HPLC method with UV-DAD detection for the assay of hydroxybenzene was developed and validated. The results showed that the method is very selective, no significant interfering peak was detected; accurate, with the percentage recoveries > 99; and reproducible, with the %RSD < 1%. The method was sensitive; a little as 13.5 <g/ml could be detected with the LOQ of 2 μg/ml. The method involves use of a simple mobile phase and minimum sample preparation, encouraging its application in quality control for analysis of hydroxybenzene in bulk samples, raw materials and fi nal cream products formulations. 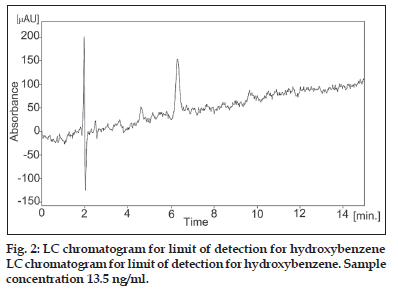 The author thanks Dr Simon Giles, School of Life Sciences, Oxford Brookes University, for his support in buying materials for research work.