A literature survey regarding quantitative analysis of these drugs revealed that attempts were made to develop analytical methods for ATV using extractive spectrophotometry [4], HPLC [5-9], GC-MS [10], LC-MS [11], LC-electrospray tandem mass spectrometry [12-14] and HPTLC [15] methods. ASP is official in Indian pharmacopoeia and titrimetric [16] and HPLC [17] methods had been reported for its estimation. For estimation of ATV and ASP in combination, RP-HPLC [18] method had been reported. This paper describes a new RPHPLC method for the estimation of ATV and ASP combination in mixture using simple mobile phase.

Potassium dihydrogen phosphate was weighed (0.544 g) and dissolved in 200 ml of water. This solution was mixed with 800 ml of methanol. Finally the pH was adjusted to 4.0 with ortho phosphoric acid (0.1 M). The solution was sonicated for 10 minutes and filtered using Whatman filter paper (No.1) and used. ATV and ASP were weighed (25 mg each) and transferred to two separate 25 ml volumetric flasks and dissolved in methanol, which gives 1000 µg/ ml of ATV and ASP, respectively. ATV and ASP solutions were further diluted with methanol to obtain final concentration of 50 µg/ ml and 100 µg/ ml, respectively.

A reverse phase C18 column equilibrated with mobile phase 0.02M potassiumdihydrogen phosphate-methanol (20:80) adjusted to pH 4 was used. Mobile phase flow rate was maintained at 1 ml/min and effluents were monitored at 240 nm. The sample was injected using a 20 µL fixed loop, and the total run time was 10 min. Appropriate aliquots of ATV and ASP stock solutions were taken in different 10 ml volumetric flasks and diluted up to the mark with mobile phase to obtain final concentrations of 0.5, 1, 2, 3, 4 µg/ ml of ATV and 5, 10, 15, 20, 25 µg/ml of ASP, respectively. The solutions were injected using a 20 µl fixed loop system and chromatograms were recorded. Calibration curves were constructed by plotting average peak area versus concentrations and regression equations were computed for ATV and ASP.

Determination of ATV and ASP in their combined dosage forms

The content of twenty capsules were taken and weighed. Powder equivalent to ATV 10.34 mg and 75 mg ASP was accurately weighed and transferred to a 50 ml volumetric flask and 20 ml of mobile phase was added to the same and flask was sonicated for 5 min. The flask was shaken, and the volume was diluted to the mark with the same mixture. The above solution was filtered using Whatman filter paper No.1. Appropriate volume of the aliquot was transferred to a 50 ml volumetric flask and the volume was made up to the mark with mobile phase to obtain 2.068 µg/ ml of ATV and 15 µg/ml of ASP. The solution was sonicated for 10 min. The solution was injected at above chromatographic conditions and peak areas were measured. The quantification was carried out by keeping these values to the straight line equation of calibration curve. The method was validated for accuracy, precision, specificity, detection limit, quantitation limit and robustness.

The accuracy of the method was determined by calculating recoveries of ATV and ASP by method of standard additions. Known amount of ATV (0, 0.5, 1, 1.5 µg/ml) and ASP (0, 2, 4, 6 µg/ml) were added to a pre quantified sample solution, and the amount of ATV and ASP were estimated by measuring the peak areas and by fitting these values to the straight-line equation of calibration curve.

Commonly used excipients (starch, microcrystalline cellulose and magnesium stearate) were spiked into a pre weighed quantity of drugs. The chromatogram was taken by appropriate dilutions and the quantities of drugs were determined.

A calibration curve was prepared using concentrations in the range of 0.1-2 µg/ml for ATV and 0.2-2 µg/ml for ASP (expected detection limit range). The standard deviation of y-intercepts of regression lines were determined and kept in following equation for the determination of detection limit and quantitation limit. Detection limit= 3.3σ /s; quantitation limit= 10σ/s; where σ is the standard deviation of yintercepts of regression lines and s is the slope of the calibration curve.

Robustness of the method was studied by changing the composition of organic phase by ± % and the pH by ±0.2, and also by observing the stability of the drugs for 24 h at 35o temperature in the mobile phase.

Optimization of mobile phase was performed based on resolution, asymmetric factor and peak area obtained for both ATV and ASP. The mobile phase 0.02 M potassiumdihydrogen phosphate:methanol (20:80) adjusted to pH 4 using ortho phosphoric acid was found to be satisfactory and gave two symmetric and well-resolved peaks for ATV and ASP. The resolution between ATV and ASP was found to be 8.1, which indicates good separation of both the compounds. The retention time for ATV and ASP were 5.4 min and 3.4 min, respectively (fig. 1). The asymmetric factors for ATV and ASP were 1.30 and 1.48, respectively. Overlain UV spectra of both ATV and ASP showed that both the drugs absorbs appreciably at 240 nm so, 240 nm was selected as the detection wavelength in liquid chromatography (fig. 2). 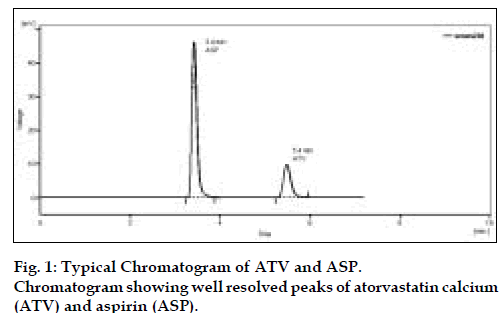 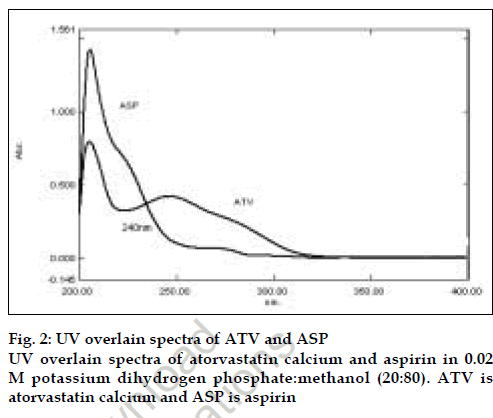 ATV is atorvastatin calcium and ASP is aspirin

The recoveries of ATV and ASP were found to be in the range of 98.02–100.68% and 98.38–101.42%, respectively. The system suitability test parameters are shown in Table 3. The liquid chromatographic method was applied to the determination of ATV and ASP in their combined dosage forms (capsule formulation A and B). The results for ATV and ASP were comparable with the corresponding labeled amounts (Table 4).

Table 3: system suitability test parameters for ATV and ASP by the proposed method

Proposed study describes a new RP-HPLC method for the estimation of ATV and ASP combination in mixture using simple mobile phase with low buffer concentration compared to the reported method. The method gives good resolution between both the compounds with a short analysis time (<10 min). The method was validated and found to be simple, sensitive, accurate and precise. Percentage of recovery shows that the method is free from interference of the excipients used in the formulation. Therefore, the proposed method can be used for routine analysis of ATV and ASP in their combined dosage form.