The present work reports development and validation of a high-performance liquid chromatography diode array detection procedure for the determination of betamethasone and sodium benzoate in pharmaceutical formulation. Effective chromatographic separation of betamethasone and sodium benzoate was achieved using Nova-pack-C18 (150×3.9 mm, 4 µm) column with gradient elution of the mobile phase composed of 50 mM monobasic potassium phosphate buffer (pH 2.9) and acetonitrile. The elution was a three step gradient elution program with 25% acetonitrile and 75% buffer at 0 min further acetonitrile concentration changed linearly to 45% up to 25 min, followed by changing acetonitrile to 25% up to 35 min. The correlation coefficient for betamethasone and sodium benzoate were 0.9999 and 0.9999, respectively. The developed method was statistically validated with regard to specificity, linearity, accuracy (recovery) and precision.

Betamethasone is one of the representatives of the glucocorticosteroid family of steroid active pharmaceutical substance, which is used for its antiinflammatory and immunosuppressive characteristics and also as a material to produce different esters of betamethasone. Chemically, betamethasone is (8S,9R,10S,11S,13S,14S,16S,17R)-9-fluoro-11,17- dihydroxy-17-(2-hydroxyacetyl)-10,13,16-trimethyl- 6,7,8,11,12,14,15,16-octahydrocyclopenta[a] phenanthren-3-one.

Lack of its mineralocorticoid properties makes betamethasone suitable for treating congenital adrenal hyperplasia. It prevents and controls inflammation by regulating the rate of protein synthesis. Betamethasone is also used as antibacterial agent which is not recognized in the medical field and reduces the immune reactions and is therefore, used to prevent organ transplant rejection, and also in the treatment of various disorders in which glucocorticosteroids are indicated.

Compared to tablet and capsule, liquid preparations promote a rapid absorption of active ingredient. Liquid formulations are essentially susceptible to microbial growth because of the quality of their substances. Such preparations need the use of preservatives agents to prevent chemical transformation and degradation of drug substance.

Sodium benzoate is widely used as preservative in cosmetics, foods and pharmaceutical drugs. Chemical structures of betamethasone and sodium benzoate are shown in fig. 1. Sodium benzoate is used in concentrations of 0.02-0.5% in oral medicines, 0.5% in parenteral products, and 0.1-0.5% in cosmetics[1]. It has been used for the preservation of betamethasone oral liquid formulations. The analysis of preservatives in pharmaceutical products is important to ensure quality assurance and consumer protection[2]. International Conference on Harmonization (ICH) guidance proposes that the finished product specification should include antimicrobial preservative content[3]. 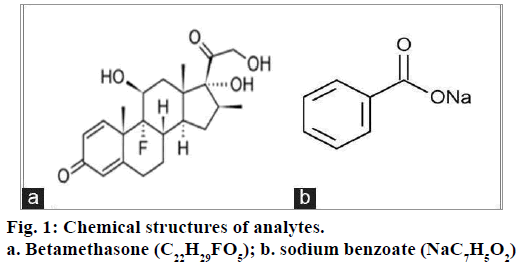 To the best of our knowledge, there is no HPLC method for the simultaneous estimation of betamethasone and sodium benzoate in oral liquid formulations. In this paper, we report a simple, economical and rapid HPLC method which could serve as assay method for determination of betamethasone and sodium benzoate simultaneously in oral pharmaceutical formulation. The present method involves minimum sample preparation and reasonable analysis time due to the use of gradient elution which reduces the retention time of the two analytes. This method was successfully validated by determining its performance characteristics with regard to specificity, linearity, accuracy and precision[15].

HPLC system used was Waters Alliance e2695 Technology (E10SM4327A, USA) system supplied with auto sampler, quaternary pump, degasser and a PDA Detector. The output signal was monitored and processed using Empower 3 manager software. The column used was a Nova-pack C18, 4 μm particle (150×3.9 mm). The mobile phase consisted of buffer pH 2.9 acetonitrile in a gradient program shown in Table 1, which was used to elute the analytes maintained at room temperature. The flow rate of the mobile phase was kept 1 ml/min. Injection volume was 50 μl and ultraviolet (UV) detection was set at 254 nm.

The buffer used in mobile phase was prepared by dissolving 6.8 g of monobasic potassium phosphate in 1000 ml of water. The pH was adjusted to 2.9 with dilute phosphoric acid. The solution was filtered over 0.45 μm filter.

Five millilitres of the oral liquid formulation was taken into a 50 ml volumetric flask of diluent. The solution was prepared to achieve final concentration of 0.05 mg/ml for betamethasone and 0.1 mg/ml for sodium benzoate.

Concerning the assay validation, specificity was evaluated by comparing the chromatograms and the data obtained from the diluent, the placebo, the standard solution (analytes are betamethasone and sodium benzoate) and the test solution (pharmaceutical reconstituted form).

To evaluate the linearity of the proposed method, solutions were prepared at 5 spaced concentration levels which cover the interval of validation. This interval was represented by the concentrations of 60, 80, 100, 120 and 140% for the validation of the assay method. Three independent series of 5 concentrations were carried out with one series per day. The peak area values were measured for betamethasone and sodium benzoate, respectively, and plotted against the analyte concentration. This linearity was verified by the following statistical tests: Cochran test, student t-test and Fisher test.

For the evaluation of the accuracy of the developed method, five sets of samples having concentrations were prepared for each recovery level in three different days. The recovery was performed at five levels of 60, 80, 100, 120 and 140% of the nominal quantity in betamethasone (50 μg/ml) and in sodium benzoate (100 μg/ml). The solutions were further analyzed, and the recovery percentages between the amount/ concentration found and the amount/concentration added, the average recovery and the confidence interval were determined.

Application of the method:

The developed method was applied to estimate betamethasone and sodium benzoate in oral pharmaceutical formulation. The analysis of the oral liquid formulation was carried out in developing chromatographic conditions.

The method validation was performed according to ICH guidelines for validation of analytical procedures. All samples were analyzed using the assay chromatographic conditions described previously in this work. The chromatographic parameters like number of theoretical plates, tailing factor, resolution and injection precision were evaluated for the performance of system suitability. The studied parameters were within the limits and were summarized in Table 2.

We study the specificity to ensure that there is no interference between the analytes (betamethasone and sodium benzoate) and the various products (excipients, mobile phase). For this, the diluent, the placebo solution (a mixture of all the ingredients except the two analytes), the standard solution (betamethasone and sodium benzoate) and the test solution (pharmaceutical reconstituted form) were injected separately.

After analyzing the samples by HPLC, the results were compared to ensure that there is no interference to signals from the diluent and placebo with the signals from betamethasone and sodium benzoate. The method is specific for the determination of the two analytes. The results are shown in Table 3 and fig. 2. TABLE 4: STATISTICAL DATA OF THE LINEARITY OF BETAMETHASONE AND SODIUM BENZOATE

The correlation coefficients between the concentration of the two analytes and detector responses are found to be higher than 0.995. The statistical evaluation of the linearity study is presented in Table 4. The statistical parameters obtained demonstrated that the method (the determination of betamethasone and sodium benzoate) has a good linearity over the considered concentrations range (fig. 3 and 4).

Accuracy is the exactness of agreement between the value which is accepted either as a conventional true value or a reference value and the value found. It is determined by comparing the found amount (concentration) with the added amount (concentration). The mean percentage recoveries were calculated for betamethasone and sodium benzoate. The results are shown in Table 5. The obtained values were found satisfactory and confirm the accuracy of the proposed method. Method accuracy was also demonstrated by plotting the concentration found of each analyte against the concentration added.

Precision expresses the closeness of agreement between a series of measurements from multiple takes of the same homogeneous sample under defined conditions. It provides an indication of random errors due. It is calculated on 3 sets of 6 measures, 100% of theoretical concentration of the components in its product (pharmaceutical reconstituted form), on a one day series, 18 independent values. Precision is expressed by a coefficient of variation of repeatability (CVr) and a coefficient of variation of reproducibility (CVR). The approach of the statistical analysis is to demonstrate statistically that the method is repeatable and reproducible. Results are shown in Table 6. The results of the precision study indicate that the method of assay of betamethasone and sodium benzoate is precise (CVr<2% and CVR<2%).

The results of the analysis of oral liquid pharmaceutical formulation using the proposed method are shown in Table 7. The developed method was successfully applied to analyze betamethasone and sodium benzoate in oral liquid formulation.

This project is in the framework of a Doctoral thesis MOBIDOC belonging to the PASRI program which is financed by the EU and managed by the ANPR. The authors gratefully acknowledge the members of the Research and Development Department at Medis Laboratories for their encouragement and support to carry out this work.