Development and Validation of a RP-HPLC Method to Quantify Amoxicillin, Tinidazole, Esomeprazole and Lansoprazole in a Mixture

Present investigation dealt with the developing of a reversed phase-high performance liquid chromatographic method for determination of amoxicillin, tinidazole, esomeprazole and lansoprazole in pure state and ias a mixture. Chromatographic separation was performed isocratically on a LiChrospher® 100 RP-18 column. The flow rate was 1.0 ml/min and the detector was set at 280 nm. The method was developed at ambient temperature with a mobile phase, 40:60 v/v acetonitrile and phosphate buffer (0.001 M, pH 7.6). The selected conditions were applicable for separating amoxicillin, tinidazole, esomeprazole and lansoprazole with retention times 3.11, 5.37, 11.71 and 17.67 min, respectively. The method was validated for parameters including linearity, selectivity, precision and accuracy, limit of detection and limit of quantitation. Linear calibration curves were obtained in the concentration range of 250.0-2000.0, 125-1000.0, 5.0-40.0 and 7.5-60.0 μg/ml for amoxicillin, tinidazole, esomeprazole and lansoprazole, respectively. The proposed method was found to be effective and could be used for quantification of these drugs in routine quality control practice.

Peptic ulcer disease (gastric and duodenal), chronic gastritis and other upper gastrointestinal tract problems are among the most common conditions caused by infection with Helicobacter pylori. This Gramnegative, microaerophilic stomach pathogen, which colonizes the human gastric mucosa is increasingly difficult to treat[1]. First-line eradication therapy should be carefully selected, pertinent and based on the local resistance rates of the antibiotic constituents. The best tolerated and safest therapy is clarithromycin (CLA) triple therapy containing CLA, one of the proton pump inhibitors (PPIs) and amoxicillin (AMOX) or metronidazole (MET). Although the aim is to obtain a highest eradication rate, antibiotic resistance is the most important reason which leads to first-line therapy failure[2]. A regional variation in antibiotic resistance is observed, with prevalence to CLA and MET, as a part of the major triple therapy[1,2]. This requires a new approach to the therapy and selection of a drug combination suitable for patients with antibiotic-resistant H. pylori infection. Lots of literature articles summarized various therapeutic directions and regimens for eradication of H. pylori[3,4]. Among them is the triple therapy with AMOX, nitroimidazole derivative and one PPI. In case of resistance to MET, it can be replaced by tinidazole (TIN). There are some papers in the literature suggested that esomeprazole (ESOM) may be more effective than other PPIs and have the most rapid action followed by lansoprazole (LAN)[5,6].

All chemicals and reagents used for method developing were HPLC grade. AMOX, TIN, ESOM and LAN standards were obtained from Sigma-Aldrich. HPLC grade acetonitrile was purchased from Fisher Chemicals. Microcrystalline cellulose, talc, starch, and magnesium stearate were used as excipients. All other chemical reagents were of analytical grade. 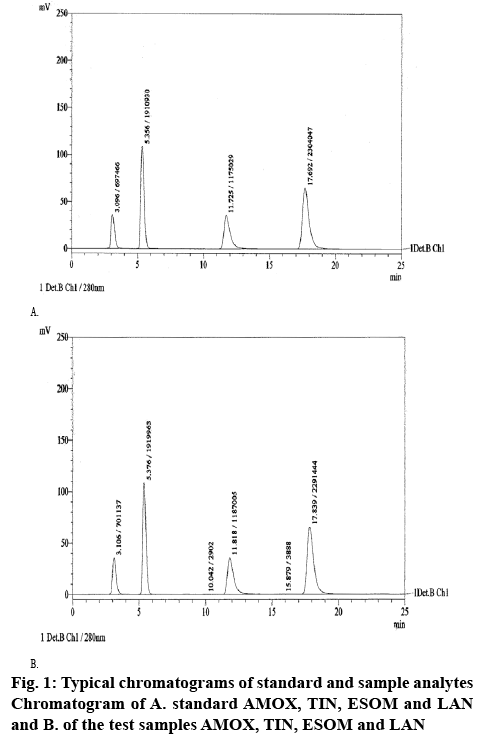 The buffer solution was prepared by dissolving 0.136 g potassium dihydrogen phosphate in 1000 ml of water and the pH was adjusted to 7.6 with 0.1 M sodium hydroxide. Stock standards were prepared by dissolving of 1000 mg AMOX, 500 mg TIN, 20 mg ESOM and 30 mg LAN (accurately weighed) each in the mobile phase in 4 separate 100-ml volumetric flasks. The stock solutions were further diluted with mobile phase (10 ml of each solution in 100 ml volumetric flask) to produce working standard solution with concentration of 1 mg/ml of AMOX and 0.5 mg/ml of TIN, 0.02 mg/ml of ESOM and 0.03 mg/ml of LAN, respectively.

A physical mixture was prepared by mixing accurately weighed 1000 mg AMOX, 500 mg TIN, 20 mg ESOM and 30 mg LAN with excipients such as microcrystalline cellulose 50 mg, talc 5 mg, starch 50 mg and magnesium stearate 5 mg and homogenised well. A portion of powder equivalent to 500 mg AMOX, 250 mg TIN, 10 mg ESOM and 15 mg LAN was transferred to a 100 ml volumetric flask, 50 ml of mobile phase was added and then sonicated for 10 min. The suspension was made up to the volume with mobile phase. An aliquot portion of the filtrate was further diluted to get a final concentration of 1 mg/ml of AMOX and 0.5 mg/ml of TIN, 0.02 mg/ml of ESOM and 0.03 mg/ml of LAN, respectively.

The proposed method was validated in terms of selectivity linearity, accuracy, precision and limits of detection and quantitation according to ICH guidelines[31]. One analytical procedure is validated for linearity when the test results provided with it, within a given range are proportional of the concentration of active substances in the samples. It is recommended to analyse at least 5 standard solutions with increasing concentrations to establish the linearity of the method. Each standard solution is injected 6 times and the mean results for peak areas are plotted on graphics against concentration of the analytes. The parameter whose limits are monitored is correlation coefficient (R2). Its value should be greater than 0.999.

The accuracy showed the closeness between true value and the value found with the current analytical procedure. The percent recovery is calculated after analysing 3 concentration levels with known added amount of analyte and 3 replicates of the procedure.

The analytical procedure was applied to the standard solutions of the drugs or the synthetic mixture.

The precision of an analytical procedure is established by analysing multiple samples. The results from the series of measurements of the same homogeneous samples should be obtained in the same conditions. The main parameters expressing precision of the method are variance and standard deviation (SD). The three levels of precision are intra-day precision (repeatability), inter-day precision and precision between laboratories (reproducibility). Repeatability is assessed by performing 6 determinations of 100 % of the test concentration.

This RP-HPLC method was developed for identifying and separating 4 drugs mostly prescribed for H. pylori therapy. Standard first line therapy included three of them AMOX, TIN and one of the PPIs, but this method allowed inclusion and determination of one more PPI. Several stationary phase and mobile phase combinations were tried in the process of developing of the method. As a stationary phase were tried C8 and C18 columns. Mobile phases consisted of organic and nonorganic solvents in varying ratios and composition were applied with the different stationary phases. Methanol and acetonitrile were the organic solvents used in the process of optimizing the content of mobile phase but as non-organic solvent was used only phosphate buffer. Factors like flow rate (0.7-1.0 ml/min), temperature (ambient and 40°), wavelength and % of buffer solution and pH of the mobile phase were changed successively to optimize the HPLC conditions. Retention times obtained for AMOX and TIN are comparable with previously reported[11]. The percent organic solvent used in the mobile phase was smaller than in the other previously developed methods[9-11], which also can be determined as an advantage. LOD and LOQ obtained with our method were comparable with these obtained with other methods[16]. To provide reproducible results some system suitability parameters were checked after repetitively injecting of the drug solutions with concentrations 1000, 500, 20 and 30 μg/ml for AMOX, TIN, ESOM and LAN, respectively. Results obtained for system suitability and method validation are shown in Table 1.

AMOX is amoxicillin, TIN is tinidazole, ESOM is esomeprazole and LAN is lansoprazole. SE is the standard error of the mean, SD is standard deviation for n=3 observations, the mobile phase used was 40:60 v/v of acetonitrile:0.001 M phosphate buffer pH=7.6

Selectivity of the method was demonstrated by good separation of AMOX, TIN, ESOM and LAN. Furthermore, matrix components, e.g. excipients, did not interfere with the analytes. A placebo sample was prepared by dissolving microcrystalline cellulose 50 mg, talc 5 mg, starch 50 mg and magnesium stearate 5 mg in 100 ml volumetric flask with the same diluent as the synthetic mixture. No peak was detected at the retention time of AMOX, TIN, ESOM and LAN hence proving the specificity of the method.

Linearity was established by analysing a series of solutions prepared by diluting the stock solution with mobile phase. Five concentrations were chosen ranging between 250-2000 μg/ml for AMOX, 125-1000 μg/ml for TIN, 5-40 μg/ml for ESOM and 7.5-60 μg/ml for LAN. Each concentration was triplicate injected and the correlation coefficients were found to be more than 0.999 for all the analytes and the results are shown in Table 2. The experiments for accuracy of the method were performed by adding known amounts of the drugs in the secondary stock solutions for AMOX and TIN with 1000 and 500 μg/ml concentrations, respectively and in the stock solutions for ESOM and LAN with concentrations 20 and 30 μg/ml, respectively. There were three levels of recovery 80, 100 and 120 % for each of the described concentrations. Three samples for each recovery level were analysed and the results of the recovery studies were summarized in Table 3.

The precision data for this method was represented by calculating the % RSD for the 4 separated drugs. Nine samples of the standard solutions were analysed and the % RSD was found to be 0.3126, 0.4598, 1.0701 and 0.5072 % for AMOX, TIN, ESOME and LAN, respectively. All values were within the limits and this validated the method as precise.

An accurate, sensitive and precise HPLC method for the simultaneous determination of amoxicillin, tinidazole and esomeprazole and lansoprazoel was developed. The advantage of this method is that it enables determination of all 4 drugs simultaneously. The method could be used for routine quality control analysis of bulk drug and synthetic mixtures.

This work is supported by the Bulgarian Ministry of Education and Science under the National Program for Research “Young Scientists and Postdoctoral Students”.