Eprosartan mesylate (EPM) [1,2] a new drug and it is used as an antihypertensive agent which is chemically monomethane sulfonate of (E)-2-butyl- 1-(p-carboxybenzyl)-a-2-thienylmethylimidazole- 5-acrylic acid (fig. 1). EPM is not official in any pharmacopoeia. EPM, a potent vasoconstrictor, is the principal pressor agent of rennin-angiotensin system. Hydrochlorothiazide (HCT) [3] is used as an antihypertensive agent which is chemically 6-chloro- 1,1-dioxo-3,4-dihydro-2H-1,2,4-benzothiadiazine-7- sulfonamide (fig 1). HCT belongs to the thiazide class of diuretics, acting on the kidneys to reduce sodium (Na) reabsorption in the distal convoluted tubule. This increases the osmolarity in the lumen, causing less water to be reabsorbed from the collecting ducts. This leads to increased urinary output. HCT is official in IP [4], BP [5] and USP [6]. 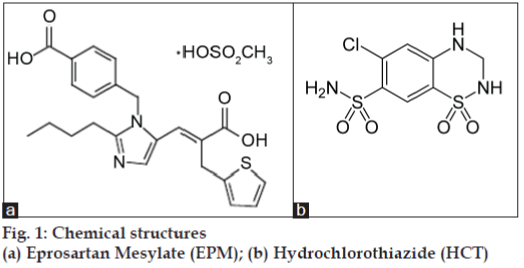 The tablet formulation containing 600 mg of EPM and 25 mg of HCT (Teveten HCT, Solvay Pharmaceuticals, Mumbai, India) was procured from the local market. All the chemicals and reagents used were obtained from Qualigens India Pvt. Ltd., Mumbai, India. 60 mg of EPM and 20 mg of HCT were accurately weighed separately and transferred to two different 100 ml volumetric flasks. Each drug was dissolved in 0.1M sodium hydroxide and made up to the mark with 0.1M sodium hydroxide. The standard stock solutions contain 600 μg/ml of EPM and 200 μg/ml of HCT. These solutions were further diluted separately to obtain (10 μg/ml) of each drug individually.

Each standard solution was scanned between the range 200-400 nm in 1 cm cell against blank. Two wavelengths were selected from the overlain spectra. i.e. 249.1 nm (isobestic point) and 274.5 nm (λ max of HCT) for the formation of Q absorbance equation.

One to six millilitres of standard stock solution of EPM and 0.5-5.0 ml standard stock solution of HCT were transferred into a series of six 100 ml volumetric flasks separately and made up to mark with 0.1M sodium hydroxide. The absorbance of different concentration solutions was measured at 274.5 nm and 249.1 nm against 0.1 M sodium hydroxide as blank. The calibration curve was plotted using concentration against absorbance. The solutions were found to be linear with the concentration range of 6-36 μg/ml of EPM and 1-10 μg/ml of HCT. The procedure was repeated for six times.

Different mixtures of the two drugs were prepared by transferring different volumes of EPM and HCT from working standard solutions into 100 ml volumetric flasks and diluting to volume with 0.1M sodium hydroxide. The concentrations of both EPM and HCT were determined by measuring the absorbance of the prepared mixtures at 274.5 nm and 249.1 nm by using absorbance ratio method.

Twenty tablets were weighed accurately and average weight was calculated. The tablets were triturated to a fine powder. An accurately weighed quantity of tablet powder equivalent to 60 mg of EPM was weighed and transferred into 100 ml volumetric flask and added a minimum quantity of 0.1M sodium hydroxide to dissolve the substance and made up to the volume with the same (600 μg/ml). The solution was sonicated for 15 min and centrifuged for 15 min at 100 rpm. The supernatant liquid was separated and filtered through Whatmann filter paper No. 41. From the clear solution, further dilutions were made by diluting 4 ml to 100 ml with 0.1M sodium hydroxide to obtain 24 μg/ml solution of EPM which also contains 1 μg/ml of HCT theoretically. The absorbance was measured at their selected wavelengths and the concentrations of two drugs were estimated by using absorbance ratio method as follows.

To an accurately weighed quantity of the tablet powder equivalent to 60 mg of EPM, 7.5, 15 and 22.5 mg of EPM and 2.5, 5 and 7.5 mg of HCT raw materials were added into a series of 100 ml volumetric flasks. The procedure was repeated as per the analysis of formulation. The amount of each drug recovered was calculated. The procedure was repeated for three times for each concentration.

In quantitative estimation of two components of EPM and HCT by Q-analysis method, absorbance were measured at the isobestic point and wavelength maximum of any one of two drugs. From the overlain spectra of EPM and HCT (fig. 2), absorbance were measured at selected wavelengths i.e., 249.1 nm (isobestic point) and at 274.5 nm, the λmax of HCT. The absorpitivty coefficients of each drug at both wavelengths were determined. Both EPM and HCT obeyed Beers law in the concentration range of 6–36 μg/ml and 1–10 μg/ml, respectively. The optical characteristics such as correlation coefficient, slope, intercept, LOD, LOQ, Molar absorpitivity and Sandell’s sensitivity were calculated and are shown Table 1. The correlation coefficient for EPM was found to be 0.9997 and 0.9998 and for HCT, it was found to be 0.9998 and 0.9999 at 274.5 nm and 249.1 nm, respectively. This indicates that the drugs were linear with the selected concentration range. 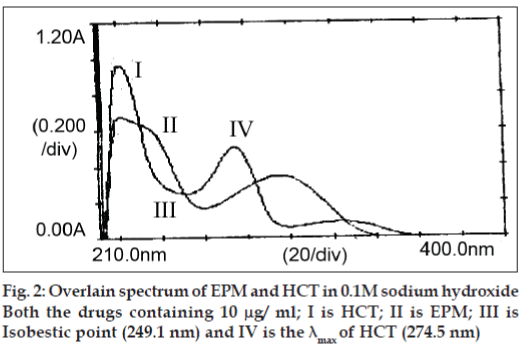 To study the mutual interference, if any, in the simultaneous estimation of EPM and HCT, synthetic mixtures containing various proportions of EPM and HCT were prepared and the contents were estimated by the proposed method. The percentage recovery varied from 99.29% to 101.06% for EPM and 99.29% to 101.69% for HCT indicating that no mutual interference in different ratios for both the drugs.

The amount of EPM and HCT in combined tablet formulation was determined and it was found to be 99.31±0.9821 and 99.91±0.7690 for EPM and HCT respectively. To study the precision of the method the analysis of formulation was carried out for six times. The % RSD values were found to be 0.9889 for EPM and 0.7697 for HCT. The low % RSD values indicated that the amount found was in good agreement with the label claim. Hence the precision of the method was confirmed.

Table 2: Intermediate precision and ruggedness of the method

The accuracy of method was confirmed by recovery studies. To the pre analyzed formulation a known quantity of raw material was added in different concentrations. The amount of drug recovered was calculated and the percentage recovery was found to be in the range of 102.29-103.10% for EPM, 99.52- 101.60% for HCT. The procedure was repeated for three times for each concentration and the %RSD values were calculated. The low %RSD values ensure that the excipients used in formulation are not interfering in the analysis of EPM and HCT.