ï»¿Ursolic acid, a pentacyclic triterpenoid possess a wide range of pharmacological activities. It shows hypoglycemic, antiandrogenic, antibacterial, antiinflammatory, antioxidant, diuretic and cynogenic activity. It is commonly present in plants especially coating of leaves and fruits, such as apple fruit, vinca leaves, rosemary leaves, and eucalyptus leaves. A simple high-performance thin layer chromatographic method has been developed for the quantification of ursolic acid from apple peel (Malus domestica). The samples dissolved in methanol and linear ascending development was carried out in twin trough glass chamber. The mobile phase was selected as toluene:ethyl acetate:glacial acetic acid (70:30:2). The linear regression analysis data for the calibration plots showed good linear relationship with r 2 =0.9982 in the concentration range 0.2-7 Îg/spot with respect to peak area. According to the ICH guidelines the method was validated for linearity, accuracy, precision, and robustness. Statistical analysis of the data showed that the method is reproducible and selective for the estimation of ursolic acid.

The proverb “An apple a day keeps the doctor away.” addresses the health effects of the fruit. Malus domestica (Rosaceae) is a small and deciduous tree, well known by the whole world for its delicious and nutritious fruits which are being grown in temperate region of the world [1]. The fruit is typically 5?9 cm (2.0?3.5 inches) in diameter. The center of the fruit contains five carpels arranged in a five?point star, each carpel containing one to three seeds. Fruits are covered with an outer coating called cuticle. The cuticle consists of three layers; a top coating of surface wax, a thick middle layer consisting of cutin embedded in wax and a lower layer consisting of cutin and wax mixed with the cell wall substances pectin, cellulose, and other carbohydrates [2]. Waxes are composed of a complex mixture of long?chain acyl lipids that are extremely hydrophobic. The wax consists of many different components and the most common components are straight?chain alkanes and alcohols of 25?35 carbon atoms, other components found in the wax are aldehydes, ketones, esters, free fatty acids and triterpenes, such as ursolic acid (fig. 1) and oleanolic acid [3]. Ursolic acid shows pharmacological effects, such as antitumor, hepatoprotective, antiinflammatory (oral and topical), antiulcer, antimicrobial, antihyperlipidemic, and antiviral [4]. The aim of this study is to quantify the ursolic acid from apple peel and to validate the developed method. 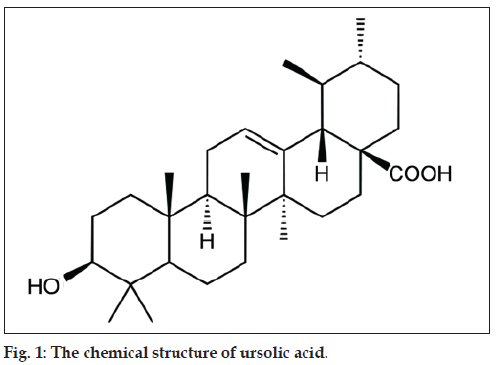 The standard solution was prepared by dissolving 10 mg ursolic acid in 10 ml methanol solution which gives solution of concentration 1000 μg/ml. Apple peels were removed from fresh apples by using peeler and dried in oven. The dried apple peels were powdered and then extracted at three different levels. At each level of extraction, 25 g powder of apple peel was taken in conical flask and macerated for 24 h in 100 ml of methanol at room temperature. The solution was vacuum filtered; filtrate was further concentrated and dried. Three successive extraction processes were performed. The extract was collected and properly stored. Test solution was prepared by dissolving 10 mg extract in 10 ml methanol (AR). It gives solution of concentration 1000 μg/ml.

Analysis was performed on 10×10 cm HPTLC silica gel 60 F254 plates. Sample and standard zones were applied to the layer as bands of length 6 mm, distance from the plate side edge 15 mm, and distance from the bottom of the plate 10 mm. Chromatographic development was performed using a mixture of toluene:ethyl acetate:glacial acetic acid (70:30:2) as mobile phase for development under the following conditions, chamber saturation time, 10 min; temperature, 25±2°; migration distance, 80 mm. After development, the TLC plates were dried. To visualize the zones, plates were sprayed with a Liebermann?Burchard reagent and heated for 10 min at 110°. Quantification of ursolic acid was achieved by scanning with Camag TLC scanner 3 (slit dimension, 5×0.45 mm; wavelength of determination, 530 nm at absorbance mode using tungsten lamp). The chromatogram was plotted as absorbance against Rf values.

The developed method was validated as per ICH guidelines [5] in terms of specificity, selectivity, linearity, precision, accuracy, limits of detection (LOD), limits of quantification (LOQ), and robustness. Specificity and selectivity were carried out by applying standard solution and test solution to differentiate ursolic acid from other closely related compounds, indicating the method was specific and selective. Linearity of method was carried out by using standard solution of ursolic acid in concentration range of 0.2?7 μg/spot. The data of area under the peak versus drug concentration was treated by linear least square regression analysis. To determine limit of detection (LOD) and limit of quantification (LOQ) standard solutions were further diluted in methanol. LOD and LOQ were defined as the amount for which signal to noise ratios (S/N) were 3 and 10, respectively. Repeatability or intraday precision of sample application and measurement of peak area was carried out using the three replicates of same spot i.e., 3 μg/spot. Interday variations for determination of ursolic acid were carried out at three different concentration levels 1, 3, 5 μg/spot on three different days. Intraday precision for determination of ursolic acid were carried out at three different concentration levels 1, 3, 5 μg/ spot on same day. Accuracy study was performed by spiking 80, 100, and 120% amount of standard drug externally to the preanalyzed samples. The experiment was conducted in triplicate. This was conducted to check the recovery of drug at different levels. The robustness of the method was performed by allowing variation in chamber saturation time by 8, 10, 12 min and variation in mobile phase proportion (68:32:2), (70:30:2), and (72:28:2).

In this study the quantitative HPTLC method was developed for the estimation of ursolic acid in herbal extract. The solvent system comprising of toluene, ethyl acetate, and glacial acetic acid (70:30:2) was found to give a good separation and resolution of ursolic acid without interference from the other materials. The peak area on the chromatogram was used for quantitative determination. During the development of the HPTLC method it was observed that a presaturation of the TLC chamber with mobile phase for at least 10 min was required to obtain a good separation with reproducible Rf values. The Rf value of ursolic acid was found to be 0.45±0.05.

The polynomial regression data for the calibration plots showed a good linear relationship over concentrations range of 0.2?7 μg/spot (R2=0.998) and regression equation is, y=2686.1x+1628.3.

Derivatization of chromatogram with Liebermann- Burchard reagent provided pink?colored spot at Rf value 0.45 corresponding to pure ursolic acid, which differentiates closely related structures, indicating the method is specific (fig. 2). The quantification of ursolic acid from apple peel extract was carried out in triplicate. The amount of ursolic acid in apple peel was found to be 1.13% w/w. The LOD and LOQ were found to be 8.3 and 25.3 ng, respectively. The recovery of ursolic acid was found between 98.44?100.9% with RSD <1.48% (Table 1). It was observed that, the percentage coefficient of variation of intraday precision and interday precision was comparable and within the limits (Table 2). The developed method was found to be robust as there was no change in Rf value by varying saturation time and mobile phase proportion. 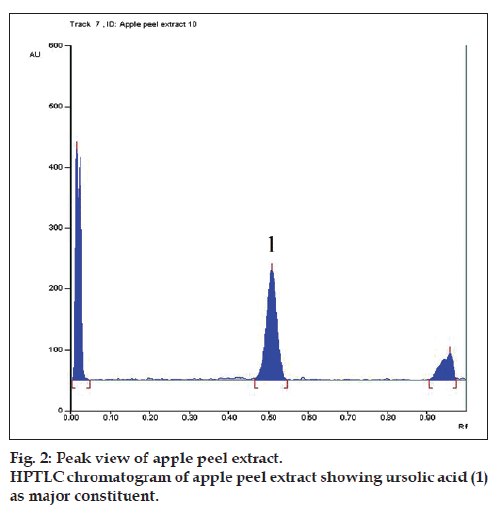 Authors are thankful to Bharati Vidyapeeth’s College of Pharmacy for providing facilities for work.