Nelumbo nucifera (Nelumbonaceae), commonly known as lotus, is an aquatic perennial plant. A simple, precise and accurate high-performance thin-layer chromatography method for quantitative estimation of an alkaloid, nuciferine from methanol extract of lotus leaf was developed. The method employed high-performance thin-layer chromatography aluminium plate precoated with silica gel 60F254 (10x10 cm) as stationary phase and separation was achieved by using a suitable mobile phase chloroform:ethylacetate:methanol:glacial acetic acid [6.5:1:2.5:0.025 v/v/v/v] and dragendorff’s reagent was used for detection. Quantitation of the method was achieved by densitometric method at 272 nm using Camag TLC scanner 3. This method showed good separation of nuciferine in the extract with Rf value 0.44±0.02. The regression analysis data indicated good linear relationship for the calibration plots for nuciferine in the range of 100-450 ng/spot and regression coefficient was 0.998. The accuracy and reliability of the proposed method was ascertained by evaluating various validation parameters like linearity, precision, accuracy, robustness, specificity, limit of quantification and limit of detection according to the ICH guideline. Statistical analysis of the data showed that the method is reproducible and selective for the estimation of nuciferine. The developed high-performance thin-layer chromatography method can be used for quantification of nuciferine in different species of lotus and formulations containing nuciferine.

Nelumbo nucifera is perennial, rhizomatous, aquatic plant belonging to the family of Nelumbonaceae, which has numerous common names (Indian lotus, Chinese water lily and sacred lotus) [1,2]. It is widely grown and consumed over the world, mainly in China, India, Japan, Korea, South East Asia, Russia and some countries in Africa [3]. Both types of lotus leaves, aerial as well as floating are large, non-wettable and orbicular and 20-90 cm in diameter. The aerial leaves are cup-shaped whereas floating leaves are flat [4]. The leaf of N. nucifera is blue-green in colour, aromatic in odour and bitter in taste [5]. Primarily they are used for resolving summer heat and to stop bleeding. It is used as food stuff and used as traditional medicine in China [6]. The leaves contain alkaloids, glycosides and flavonoids [7]. The major pharmacological active components of lotus leaves are aporphine alkaloids such as nuciferine, 2-hydroxy-1-methoxyaporphine, pronuciferine and roemerine [8]. These alkaloids compounds have been reported to show biological activities including antioxidant, antiHIV, antimicrobial, antihyperlipidemic, antiobesity and antidiabetic [9].

The aim of present study was to develop a validated analytical method for detection and quantification of nuciferine. The critical factors needed to be considered while developing a new method are physicochemical properties of analyte (pH, solubility), extraction process, sample preparation, selection of mobile phase and stationary phase, solution and stability. The high performance thin layer chromatography (HPTLC) method [10,11] developed was accurate, robust, precise and specific for the determination of nuciferine in Lotus leaves. The developed method was found to be superior to previously reported methods as it was less time consuming, less solvent required for mobile phase as compared to HPLC and gas chromatographymass spectrometry (GC-MS), sample preparation is easy, low analytical requirement, visual detection is possible, less chances of cross contamination and low cost required. The proposed method was validated as per International Conference on Harmonisation (ICH) guidelines. Reference standard of nuciferine was procured from Numex Chemical Corporation, Mumbai, India (Figure 1). Nuciferine is the aporphine alkaloid with empirical formula C19H21NO2 and molecular weight 295.38. Melting point of nuciferine was found to be 165.5o. Solubility of nuciferine is in alcohol. Analytical grade reagents; chloroform, ethyl acetate, methanol and glacial acetic acid (S. D. Fine-Chem Limited, Mumbai, India) were used. The fresh lotus leaves were collected from Seawoods-Darave, Navi Mumbai. The plant material was dried and authenticated for its correct botanical identity. The HPTLC system consisted of a Camag Linomat V sample applicator equipped with a 100 μl Hamilton syringe, Camag TLC scanner 3 was used for densitometric analysis, and these were supported with Camag WinCATS software. Camag twin-trough chamber (10×10 cm) was used. Application of sample was done on precoated silica gel 60F254 (Merck, Germany). 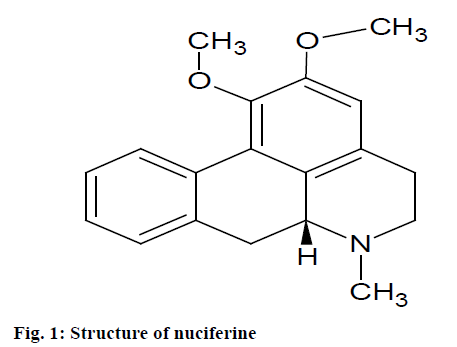 The standard solution was prepared by dissolving accurately weighed 10 mg of nuciferine in 10 ml methanol solution, which gives solution of concentration 1000 μg/ml. The fresh lotus leaves were dried in tray dryer at 55o temperature. The dried lotus leaves were powdered using domestic mixer. About 1 g of powdered lotus leaves was extracted using 100 ml (4×25 ml) methanol by maceration process. To facilitate extraction, magnetic stirrer was used for 24 h and filtered through Whatmann filter paper. The final volume of 100 ml extract was used for nuciferine quantification.

The HPTLC analysis was performed on Merck silica gel 60F254 plates (10×10 cm). The chromatographic ascending development was performed using a mixture of mobile phase chloroform:ethyl acetate:methanol:glacial acetic acid (6.5:1:2.5:0.025 v/v/v/v) to a migration distance of 80 mm. The chamber was previously saturated for 25 min at temperature 25±2°. Sample and standard zones were applied as band of 6 mm wide at distance from the plate side edge 10 mm and distances from bottom of the plate 10 mm. After development the plates were dried and were sprayed with Dragendorff’s derivatization reagent for visual detection. Quantification of nuciferine was achieved by scanning with Camag TLC Scanner 3 (slit dimension 5×0.33 mm) at wavelength of 272 nm using deuterium lamp. The chromatogram was plotted as absorbance verses Rf values.

The developed method was validated as per ICH guidelines. The linearity of an analytical procedure is its ability to obtain test results, which are directly proportional to the concentration of analyte in the sample. Linearity was observed by plotting drug concentration against peak area for standard and was validated by the correlation coefficients. The linearity of method was carried out by using standard solution of nuciferine in the range of 100-450 ng/spot. Limit of detection (LOD) and limit of quantification (LOQ) were defined as k×SD/s (k is constant, s is slope of calibration curve and SD is standard deviation). The amount for which signal to noise ratio (S/N) were 3 and 10, respectively is defined as LOD and LOQ.

Precision provides an indication of random error. Determination of repeatability and intermediate precision was carried out by measuring intraday variation and interday variation in triplicate. The precision performed three times on same day termed as intraday precision while the precision performed over three different days was known as interday precision. Determination of nuciferine for three different days at three concentration levels 100, 300 and 450 was performed and the results were expressed as percent relative standard deviation. The system precision was carried out with 6 replicates of same concentration of 300 ng/spot for nuciferine and % RSD of the replicate injection was calculated. Accuracy is also known as percent recovery. It was performed by applying known concentration and further spiking by 80, 100 and 120% w/v amount of analyte in triplicate and the accuracy is then calculated as percentage of analyte recovered from assay. The robustness of the method was studied in triplicate at 100 ng/spot and 300 ng/spot for nuciferine by deliberately making small changes such as chamber saturation time variation (25±5 min) and variation in mobile phase composition (6.7:0.8:2.5:0.025 v/v/v/v) and (6.3:1.2:2.5:0.025 v/v/v/v). Specificity of the method was performed by applying standard and test solutions and by confirming their Rf values and differentiating standards from other closely related compounds, showing that the method was specific. The peak purity was evaluated by comparing the spectrum of standard nuciferine with sample.

In this study, HPTLC method was developed for quantification of nuciferine in Lotus leaf. The solvent system chloroform:ethyl acetate:methanol:glacial acetic acid (6.5:1:2.5:0.025 v/v/v/v) showed good separation and resolution of nuciferine peak without interference from the other compounds present in extract. TLC chamber was saturated for 25 min with mobile phase to show good resolution with reproducible retention factors (Rf). For quantitative determination, peak area was used. The Rf value of nuciferine was found to be 0.44±0.02 (Figure 2). Nuciferine showed good linear relationship over concentrations range of 100-450 ng/spot (regression equation is, y=11.563x+255.07 and r2=0.998). The LOD and LOQ were found to be 6.5 ng/spot and 19.8 ng/ spot. The percentage coefficient of variation (%RSD) of intraday precision and interday precision of nuciferine was found to be less than 2%, which was within the limits as shown in Table 1. The system precision results showed that the repeatability of measurement of the area was precise with RSD 1.41% for nuciferine since their coefficient of variation was less than 2% it is possible to conclude that the instrument has good precision (n=3). The recovery was found to be 100.55, 99.14 and 98.96% for nuciferine in lotus leaf as shown in Table 2. There was no change in Rf values by varying mobile phase composition (6.7:0.8:2.5:0.025 v/v/v/v) by +5% (1.01% RSD for nuciferine) and (6.3:1.2:2.5:0.025 v/v/v/v) –5% (0.46% RSD for nuciferine) and by varying saturation time by +5 min (0.47% RSD for nuciferine) and –5 min (0.98% RSD for nuciferine). Therefore the developed method was robust. Derivatization of chromatogram with Dragendorff’s reagent provided orange colored spot at Rf value 0.44 corresponding to pure nuciferine, which differentiates closely related structures, indicating the method was specific. 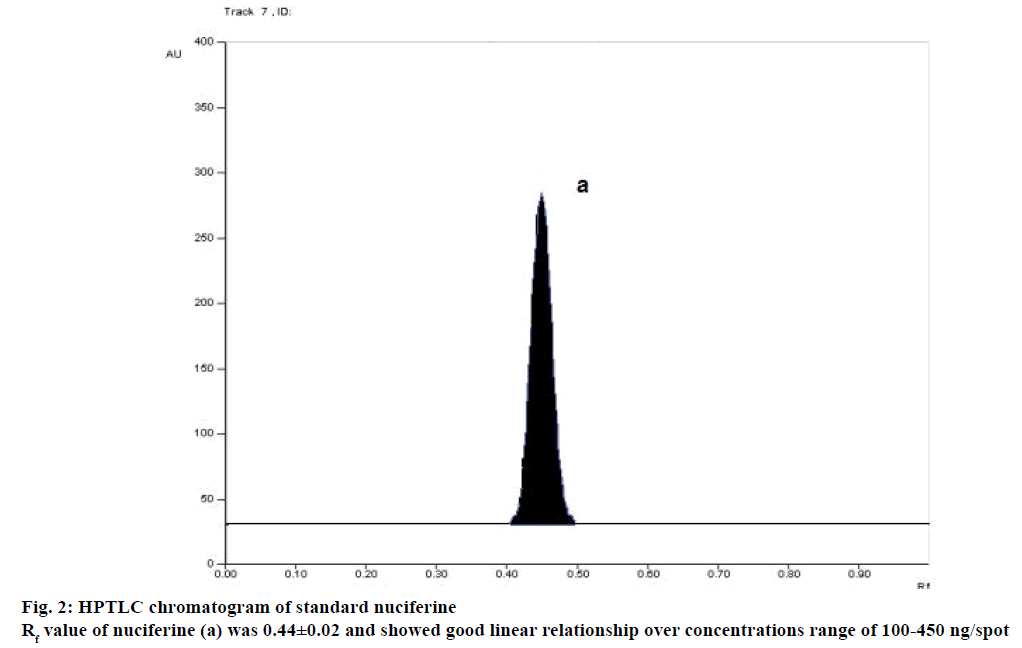 Figure 2: HPTLC chromatogram of standard nuciferine
Rf value of nuciferine (a) was 0.44±0.02 and showed good linear relationship over concentrations range of 100-450 ng/spot

Each result was an average of three observations. Concentration levels used for precision parameter were 100, 300, 450 ng/spot for nuciferine, RSD: relative standard deviation

Each result was an average of three observations performed at 80, 100 and 120% levels. RSD is relative standard deviation