The present study depicts the development of a validated reversed-phase high performance liquid chromatographic method for the determination of the everolimus in presence of degradation products or pharmaceutical excipients. Stress study was performed on everolimus and it was found that it degrade sufficiently in oxidizing and acidic conditions but less degradation was found in alkaline, neutral, thermal and photolytic conditions. The separation was carried out on Hypersil BDS C18 column (100×4.6 mm, 5 μ) column having particle size 5 μ using acetate buffer:acetonitrile (50:50 v/v) with pH 6.5 adjusted with orthophosphoric acid as mobile phase at flow rate of 1 ml/min. The wavelength of the detection was 280 nm. A retention time (Rt) nearly 3.110 min was observed. The calibration curve for everolimus was linear (r2=0.999) from range of 25-150 μg/ml with limit of detection and limit of quantification of 0.036 μg/ml and 0.109 μg/ml, respectively. Analytical validation parameters such as selectivity, specificity, linearity, accuracy and precision were evaluated and relative standard deviation value for all the key parameters were less than 2.0%. The recovery of the drug after standard addition was found to be 100.55%. Thus, the developed RP-HPLC method was found to be suitable for the determination of everolimus in tablets containing various excipients.

Everolimus is a potent macrolide immunosuppressant with antiproliferative activity [1]. Everolimus have emerged as promising therapeutic agent for the treatment of various types of cancer, including renal cell carcinoma, breast carcinoma, non-small cell lung carcinoma, endometrial carcinoma, glioblastoma and mantle cell lymphoma [2]. Everolimus is majorly used for the treatment of patients with advanced kidney cancer [3]. Everolimus is an inhibitor of mTOR, inhibits antigenic and interleukin (IL-2 and IL-15) stimulated activation and proliferation of T and B lymphocytes [4]. Everolimus, a proliferation signal inhibitor that prevents growth factor-induced cell proliferation, is effective in reducing the incidence of acute rejection in solid organ transplantation [5-7]. Chemically, everolimus is (1R,9S,12S,15R,16E, 18R,19R,21R,23S, 24E,26E,28E,30S,32S,35R)- 1,18-dihydroxy-12-{(1R)-2- [(1S,3R,4R)-4-(2- hydroxyethoxy)-3-methoxycyclohexyl]-1-methylethyl}-19,30-dimethoxy-15,17,21,23,29,35-hexamethyl- 11,36-dioxa-4-aza-tricyclo [30.3.1.0]hexatriaconta- 16,24,26,28-tetraene-2,3,10,14,20–pentaone and its empirical formula is C53H83NO14 (fig. 1). 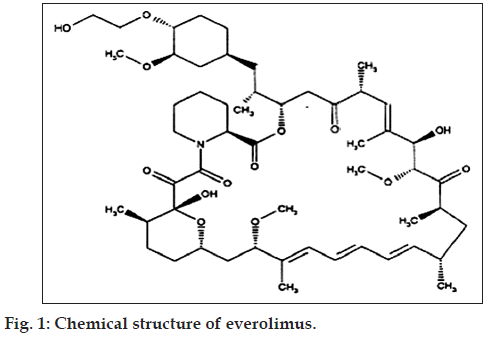 Literature survey suggests several methods for estimation of everolimus alone or in combination with other drugs such as UV spectrophotometry [8], HPLC [9,10] and LC-MS [11-13]. The present investigation was undertaken to develop new, simple, accurate and precise high performance liquid chromatographic method for the estimation of everolimus in bulk and tablet dosage form.

Accurately weighed 10 mg of everolimus was transferred to 10 ml volumetric flask. The volume was made up to the mark with diluent to obtain stock solution of everolimus having concentration 1000 μg/ml. From this solution prepared working range concentration. Linearity range solutions containing 25, 50, 75, 100, 125 and 150 μg/ml of everolimus were prepared.

Optimization of mobile phase was performed based on trial and error method. In this different mobile phase trial was taken like in water:methanol, acetonitrile:water, methanol:acetonitrile in different ratio without pH but different problems were observed like high tailing factor and not optimized theoretical plates. After that trial with ammonium acetate buffer:acetonitrile (50:50 v/v) pH 6.5 adjusted by orthophosphoric acid, in this everolimus full filled all the criteria of system suitability. The solvent mixture was filtered through 0.45 μ membrane filter and sonicated before use. It was pumped through the column at a flow rate of 1.0 ml/min. The mobile phase consisting of ammonium acetate buffer:acetonitrile (50:50 v/v) was selected which gave sharp, well-separated peak from everolimus peak (fig. 2). The retention time for everolimus was 3.110 min. So, finally ammonium acetate buffer:acetonitrile (50:50 v/v) pH 6.5 adjusted by orthophosphoric acid mobile phase was selected for analysis. 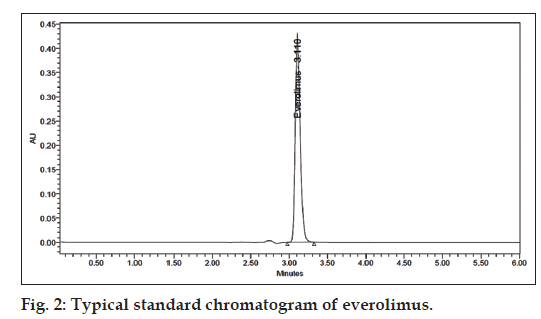 Injection volume was 10 μl and the column was maintained at a temperature of 30º. The column was equilibrated by pumping the mobile phase through the column for at least 30 min prior to the injection of the drug solution. The detection of the drug was monitored at 280 nm. The run time was set at 6 min. The condition used for chromatographic analysis was shown in Table 1.

Preparation of mobile phase and diluent

Accurately weighed and transferred 0.77 g of ammonium acetate in 1000 ml volumetric flask and about 900 ml of milli-Q water was added and sonicated to degas. The final volume was made with water and then pH was adjusted to 6.5 with dilute orthophosphoric acid solution. Five hundred milliliters of above prepared buffer and 500 ml of acetonitrile were mixed. This mixture was used as mobile phase. The mixture of 200 ml of water and 800 ml of methanol was used as diluent.

The developed method was validated [14] according to the International Conference on Harmonisation (ICH) guidelines [15,16] for different parameters like linearity, accuracy, precision, specificity, limit of detection (LOD), limit of quantification (LOQ) and robustness. Suitability of the chromatographic system was tested before each stage of validation. Five replicate injections of standard preparation were injected and retention time, tailing factor, number of theoretical plates and relative standard deviation of peak area were determined.

Under proposed experimental conditions, the relationship between the peak area and the concentration of everolimus was studied. The calibration curve was plotted between concentrations versus peak area over the concentration range of 25-150 μg/ml. An aliquot (10 μl) of each solution were injected under the optimized chromatographic conditions and the chromatograms were recorded. The correlation coefficient (r2) value was found to be 0.999. Six replicate of prepared 100 μg/ml solution of everolimus was taken from stock solution and measured the area. The relative standard deviation (%RSD) was found to be less than 2%, which indicates the proposed method is repeatable. The summary of validation parameters were shown in Table 2.

The accuracy of the method was determined by calculating recovery of everolimus by the standard addition method. For the previously analyzed sample (100 μg/ml), a known amount of standard drug was added at 50, 100 and 150% levels (50, 100 and 150 μg/ml). The contents were reanalyzed with the above described procedure. Each level was repeated three times and the accuracy was indicated by percentage recovery. The accuracy data of everolimus was shown in Table 3.

Limit of detection, limit of quantification and robustness

LOD and LOQ were determined using the equations LOD=3.3×σ/S and LOQ=10×σ/S, where, σ is the standard deviation of the response and S is the slope of the calibration curve. The robustness of a method is its ability to remain unaffected by small changes in parameters like changes in flow rate, change in mobile phase composition, change in wavelength and change in pH.

Twenty tablets were accurately weighed and finely powdered. A quantity of the powder equivalent to 10 mg of everolimus was dissolved by shaking with 20 ml water:methanol (20:80 v/v) as diluent, followed by another two dilutions each with 10 ml of diluent. It was filtered through Whatmann filter paper no. 42 to remove insoluble materials. The volume of filtrate was diluted to 10 ml with diluent (100 μg/ml). It was further diluted according to the need and then analyzed following the proposed procedures. From this solution 10 μl was injected into the HPLC system. The results are furnished in Table 4. Optimizations of chromatographic conditions were performed to obtain the good peak shape, resolution and peak parameter (tailing factor, theoretical plates). For the selection of mobile phase initially water:methanol, acetonitrile:water and methanol:acetonitrile has been tried in different columns and different proportions but it gave poor base peak and also poor system suitability parameters. Finally, ammonium acetate buffer:acetonitrile mixture was tried at pH 6.5 adjusted with orthophosphoric acid (50:50 v/v) at a flow rate of 1 ml/min was found to be satisfactory and good system suitability parameters. The everolimus drug component was measured with PDA detector at 280 nm. The average retention time (Rt) for everolimus was 3.110±0.002 min, cuts down on overall time of sample analysis and the method was more cost effective as it utilizes very less quantity of mobile phase. The tailing factor and number of theoretical plates for everolimus was found to be 1.24 and 10987, respectively, which indicates efficient performance of the column. The developed HPLC method was validated as per ICH guidelines.

A simple, linear, precise, accurate, selective, sensitive and rapid RP-HPLC method with PDA detection for everolimus in pharmaceutical dosage form has been developed and validated. The method has been found best than from few methods reported, because of use of a less economical and readily available mobile phase, lack of extraction procedures. Degradation products produced as a result of stress conditions did not interfere with detection of everolimus and the assay method can thus be regarded as stability indicating. The method would be extensively used for the estimation of everolimus in bulk and pharmaceutical formulation.