Development of a Liposomal Dosage Form for a New Somatostatin Analogue

Despite a wide range of chemotherapeutic drugs used in actual therapy of malignant tumours, the main limitation of use in clinical practice is the expressed toxicity of most of these. There existed a need to search, study and develop dosage forms of drugs with high antitumor activity and low expressed side effects. Such dosage forms are needed to deliver analogues of a peptide hormone of hypothalamus, somatostatin, which inhibited release of human growth hormone, thyrotropin, glucagon, insulin, and also suppressed proliferation of many normal and tumor cells [1].

Analogues of somatostatin such as octreotide and lantreotide are under clinical investigation [2]. Indications for their use in oncology are, endocrine tumours of digestive tract and pancreas and therapy of androgenin-dependent prostate cancer. Thus, synthesis of new analogues of the somatostatin group, investigation of the mechanisms of action of their antiproliferative activities, and development of dosage forms are the new directions of research in this field.

In the Laboratory of Chemical Synthesis of the Institute of Experimental Diagnostics and Therapy of Tumours, N. N. Blokhin Russian Cancer Research Center, a new pentapeptide analogue of somatostatin (AS) was synthesized. Preliminary studies of hormonal activity of AS have shown that it suppressed secretion of somatotropic hormone and prolactin. Also high antitumor activity of AS on the intertwined solid tumours on mice was reported.

For reducing side effects and increasing therapeutic efficacy, a liposomal formulation of AS was attempted. The choice of liposomes as a delivery system for AS was made due to their positive characteristics, such as increase in bioavailability of hydrophobic substances [3,4], increase of therapeutic efficacy of newer drugs and other widely applied antitumor substances [5], especially due to improving of selectivity of the action [6,7].

AS is a white or slight yellowish odourless crystal powder with a melting point in the range of 121-125°, which is practically insoluble in water, very slightly soluble in diluted mineral acids and alkalis, slightly soluble in 95 % ethyl alcohol and acetone, soluble in chloroform. Its molecular weight is 1016.2 g/mol.

Model compositions of AS liposomal dosage form were prepared using the lipid film rehydration method modified for hydrophobic substances. Ingredients used to form liposomal bilayer (EL, cholesterol and PEG-2000-DSPE) were dissolved in chloroform. Chloroform solution of AS was sonicated in an ultrasonic bath Trassonic (Elma, Germany) for 5-10 min, and then added to solution of lipids. Obtained mixture was filtered through the Pall nylon membrane filter (Pall Eurasia Ltd., Russia), pore size 0.22 μm, and transferred to a round-bottom flask. The solvent was removed at +37° using a rotary evaporator Büchi Rotavapor R-200 (Büchi Labortechnik AG, Switzerland) to form a homogeneous semi-transparent lipid film. Obtained film was additionally dried in a vacuum desiccator to complete removal of organic solvent and then hydrated with a solution of sucrose to form a multilamellar vesicle dispersion. Dispersion was extruded on pneumatic extruder Lipex (Northern Lipids; Lipex Biomembranes, Canada) sequentially through nylon filter Pall membranes, pore sizes 1.20, 0.45 and 0.22 μm.

The following parameters of all obtained samples were characterized, size of liposomes measured by nanosizer Nicomp 380 Submicron Particle Sizer (Particle Sizing Systems, USA), pH of the liposomal dispersion measured potentiometrically using a pH-meter Hanna 211 (Hanna Instruments, Germany), and assay of AS incorporated in the liposomal bilayer was determined by spectrophotometry using a standard solution at wavelength 282±3 nm. Also it was observed that other ingredients in the composition of liposomes, such as lecithin, cholesterol and PEG-2000-DSPE, absorbed light at the same wavelength. Therefore, measurements were performed in comparison with a blank solution, which consisted of empty liposomes, prepared similarly to the AS liposome preparation without AS.

Biological studies were carried out on tumor-bearing first generation F1 (C57Bl/6xDBA/2), as well as outbred mice, female weighting 20-22 g, obtained from the animal house and kept on a standard diet. The animals were given cubed feed and water ad libitum. All experiments were performed according to the ethics of Biomodel and laboratory animal experiments adopted by the N. N. Blokhin NMRCO [8]. Efficiency of antitumour therapy was investigated on models of breast adenocarcinoma Ca-755. Ca-755 was transplanted to F1 hybrid mice by intramuscular injection of homogenized tumor into the right shin issue diluted 1:10 by 199 medium (PanEco, Russia). The animals were grouped to ensure statistically reliable results are obtained, the control group comprised of 10 mice and the experimental group comprised of 8 mice.

Systemic administration of AS was made 48 h after tumor transplantation. Liposomal AS injected to mice intravenously once either at a dose of 5 mg/kg or at a dose of 20 mg/kg. Antitumor efficacy was evaluated by tumor growth inhibition (TGI %) and survival of experimental animals compared with non-treated control group. In the determination of TGI, the volume of the tumor was calculated, first, as the product of three maximally reciprocal sizes of the tumor node (length, width and height) in each animal, and then the average tumor volume in the group was calculated.

Statistical significance of antitumor effect compared to the control group was estimated by Fischer-Student method. Differences between parallel groups were considered to be statistically significant at p≤0.05.

Composition of liposomal AS was based on mixture of EL and cholesterol providing both biocompatibility and stability of delivery vehicles supplied, with phospholipid-conjugated polyethylene glycol (PEG- 2000-DSPE) to overcome fast clearance vesicles by cells of the reticuloendothelial system. Based on these components, 6 formulations containing different amounts of excipients were prepared. Results of mean liposome size, pH, concentration and ID determination for each composition are presented in Table 1. Results showed that according to above-mentioned parameters (high level of ID- 96 % and an acceptable liposome size- 151 nm; figure 1 and figure 2) the most appropriate was the composition 3, without cholesterol, which was used for further studies. 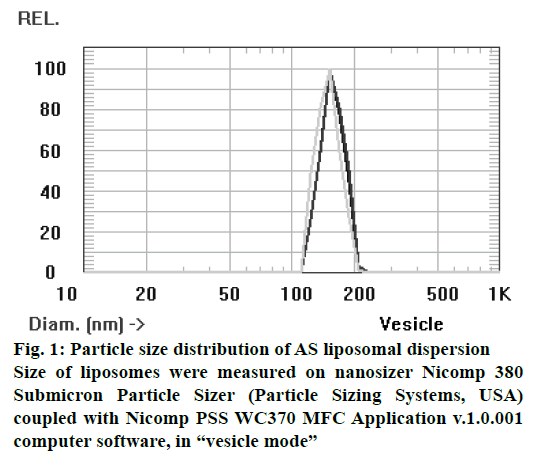 Figure 2: ASM image of AS liposomes
On a collodion-carbon film-coated substrate pattern contrasted with 1 % uranyl acetate and viewed in a JEM-100CX (Jeol, Japan) electron microscope at a magnification of 20 000 times with a scanning resolution 1200 dpi. For the accurate calculation of the increase, were used photos of latex particles with average diameter of 109±3 nm

Studies were conducted to determine the optimal number of extrusion cycles needed to produce АS liposomes. Due to the fact that abundant increase of extrusion time caused activation of liposomal phospholipid peroxidation, increase of their size due to Ostwald ripening and decrease of EE, the minimum time (number of cycles) of extrusion to obtain the liposomes of required diameter (100-150 nm) was determined. Liposomal dispersion was loaded at volume 10 ml, extruded and sampled after each extrusion cycle. Experimental samples were evaluated for the change of mean vesicle size. This experiment showed that the optimum criterion, liposome size was reached during 7 extrusion cycles (Table 2). The maintenance of extrusion is not appropriate, because it does not lead to decrease of liposome size, and the influence of negative factors may be exacerbated.

Table 2: Effect of extrusion on as liposomes size

P≤0.05 in comparison to control

Table 3: Antitumor activity of the model composition of as liposomes

While developing the new liposomal AS, a model was established, which contained EL and polyethylene glycol-2000-distearoilfosfatidil ethanolamine in the molar ratio of 72/1, as main components of the liposomal bilayer, and sucrose as a cryoprotector. During the development of technological parameters to obtain the liposomal formulation, it was found that to ensure an acceptable size of derived phospholipid vesicles, about 7 extrusion cycles are needed. The instability of a selected composition of the liposomal dispersion during storage was overcome by lyophilization, kept physical and chemical indicators of the formulation at the initial level. The efficacy of this delivery system on a transplanted breast adenocarcinoma Ca-755 mice tumor model, which was more than 60 % of TGI at 5 mg/kg and more than 80 % TGI with 20 mg/kg. Findings of this investigation indicated that further research is required to develop this AS liposomal formulation in to a potential antitumor therapy.

The investigation was a part of the scientific program “Creation of innovative nanostructured hydrophobic formulation of domestic analogue of hypothalamic hormone somatostatin in the treatment of hormonedependent tumours” under financial support of Russian President's Scholarship.