The inhalation therapy records were found in ancient Indian culture. In olden age these therapy contains aromatic fumes and vapours created from plant or from burning organic materials. The first successful dry powder inhaler (DPI) was developed almost 30 years ago. May be the Hippocrates was the first person to describe the inhaler device. The first records described the aerosol adrenaline was administered using squeeze bulb nebulizer. Asthma caused by an allergic reaction because of allergen such as animal hairs, plant pollens, dust, feathers and certain chemicals and foods [1]. Asthma was a chronic inflammatory disorder of the airways in which many cells play a role, in particular mast cells, eosinophils and lymphocytes [2]. In susceptible individuals, this inflammation causes recurrent episodes of wheezing, breathlessness, chest tightness and cough particularly at night and/or in the early morning at atmospheric air pressure. The inflammation also causes an associated increase in airway responsiveness to a variety of stimuli.

Asthma classified as intrinsic (chronic) and extrinsic (allergic) [3]. During an asthma, spasmodic contraction of bronchial muscle constricts the airway and thick sticky mucus secretion reduces the airway. Asthma controlled by a combination of therapies. Oxygen is essential for human survival, 21% of oxygen must be in inspired air. In asthma patients oxygen was decreased due to lack of ventilation which cause alveolar hypoventilation (hypoxeima [4]), i.e., failure to maintain the partial pressure of oxygen in the alveoli at the normal level condition which give rise to rapid and shallow breathing. At this condition life will be saved by administration of therapeutic gas oxygen with bronchodilator. Drug taken regularly by inhaler or by mouth will help to prevent attacks. In extreme cases mechanical respirator required. Total amounts of inhaled powders (including active drug and any excipients) are usually less than 10-20 mg [5].

Salbutamol has a potent bronchodilator effect by the stimulation of β2 receptors. It is administered by mouth, inhalation and injection. The normal dose for inhalation of salbutamol sulphate was 100 μg and 2 to 4 mg by mouth, 0.6 mg every 4 h by intramuscular injection. The pulmonary route by oral inhaler delivery of salbutamol sulphate was considered as another route of non invasive systemic drug delivery method. This route was also used as alternate to oral delivery. Salbutamol sulphate is hydrophilic drug [6]. It is a short acting beta 2 adrenoreceptor stimulant with plasma half life of 4-6 h, which requires frequent dosing for daily management of asthma. The aerosol route of drug delivery was a twentieth century innovation.

The DPIs were single dose units containing micronized drugs blended with lactose carrier particles in single gelatin capsules to be inserted in to the device by the patient immediately before inhalation use. Rotahaler, spinhaler, cyclohaler/aerolyser were well known single dose powder inhaler. In rotahaler device capsule inserted and broken into two halves by twisting the mouthpiece. The powder falls into the body of the inhaler and patient inhale through the mouth piece to scatter the powder and deliver small quantity of the micronized drug particles into the lung. The powder properties played active role in this inhalable powder formulation for the deposition to the deep lung depends based on particle size, shape, morphology and density. The biocompatible excipients selection was considered as must to produce a desired dissolution and the improved deposition of desirable respirable particles in to the mini airways of the lung. The sustained release inhalation formulation was developed as one of the application of particle engineering, which was not marketed yet. The sustained release drug delivery releases the salbutamol over an extended period of time and thereby improves therapy by the compliance of asthma patients. In this formulation drug applied directly to the pulmonary system. So salbutamol dose was decreased and also side effects of salbutamol was reduced [7-9].

The solvent evaporation method involves preparation of o/w emulsion between organic phase consisting of PLGA (50:50; 45KD) in dichloromethane (DCM), to this mixture salbutamol sulphate solution was added and mixed by sonication using probe sonicator and injected this mixture drop wise into the aqueous phase containing 2% w/v PVA. The organic phase was emulsified in aqueous phase by homogenization at 10 000 rpm for 10 min using a homogenizer (Viritis Cyclone IQ, USA). The emulsion was stirred for 12 h at 25±2° using magnetic stirrer to ensure complete evaporation of dichloromethane. The microparticles thus prepared were recovered by centrifugation (15 000 rpm, 20 min, 4°). The precipitate was washed completely removed polyvinyl alcohol. The product dispersed in cold water and recovered by lyophilisation. The 4 different batches of microparticles were prepared by keeping organic phase to aqueous phase ratio as (OP:AP::1:5) and varying drug:polymer ratios of Table 1.

Infrared spectroscopy was used to determine various functional groups of the drug molecule. In general the functional groups can exhibit changes as a result of processing drug formulations. The resulting FTIR spectra graphs of salbutamol sulphate, and Trials K1, K2, K3 and K4 were given and discussed in fig. 1a-e. The surface morphology and shape of the prepared microparticles were investigated with scanning electron microscopy (VEGA3 LMU, TESCAN) with a maximum magnification of 10,00,000*X and a resolution 3 nm at a maximum applied voltage of 30 kV. The electronic images were recorded digitally at higher magnification. Scanning electron microscopy was used to visualize the particle diameter, structural and surface morphology of the DPI microparticles. The powders were kept on adhesive coated, 6.25 mm radius aluminium stubs. The remaining powder was removed by tapping the stubs and blowing a jet of particle free compressed gas. Then the specimens were examined in the scanning electron microscope which will operated with maximum vacuum and with accelerating voltage of 5-15 KV with a specimen working distance of 12 min.

The percentage yield was calculated by using the following formula. Percentage yield=(Actual wt. of microspheres)/(Wt. of starting materials)×100.

Anderson cascade impactor (ACI) deals with particle size as per pharmacopoeial specification. This impactor has eight stages stimulating the diverse parts of the human pulmonary system [10]. By analyzing the amount of drug deposited on the eight stages the fine particle dose and respiratory fraction can be calculated. ACI has induction port, pre separator, seven stages and filter. It operate on the principle of inertial impaction i.e., separation was provided on the basis of differences in inertia – a function of aerodynamic particle size and velocity. The ACI was connected with vacuum pump equipped with a flow meter. The airflow was 60 l/min. The emitted dose (%), respiratory fraction (%), total recovery, mass median aerodynamic diameter were calculated by determining the quantity of salbutamol by UV spectrophotometer of a wavelength of 278 nm. The respirable particle fraction (RF) and emission dose (ED) were calculated to describe the inhalation properties of DPIs. Six replicates of the measurements were performed. The ACI operation conditions were given in Table 2.

The In vitro dissolution of salbutamol sulphate from the microparticles were analysed by a dialysis bag diffusion method [11]. The In vitro release [12-14] was carried out with phosphate buffer saline (PBS) pH 7.4 as the diffusion medium and a dialysis membrane of 14 kDa molecular weight (Himedia, Mumbai, India) was used. An aqueous dispersion equivalent to 10 mg of salbutamol sulphate microsphere was kept in a dialysis bag and sealed at both ends. The dialysis bag was immersed in 250 ml of diffusion medium and stirred at 100 rpm. Samples were withdrawn at predetermined time intervals, and the receptor phase was replenished with an equal volume of blank after each sample was withdrawn. Samples were filtered through 0.46 μm filter and appropriately diluted with pH 7.4 PBS [15]. Absorbance of the samples at 278 nm was determined by UV/Vis spectrophotometry with pH 7.4 PBS as blank. The cumulative percent drug at various time intervals was calculated and plotted against time. All experiments were done in triplicate.

The amount of drug within respirable particles and percentage of the drug reaching the lung was according to characteristics of powder formulations. Drug deposition of DPI varies from 5-30% of the dose, but efficiency depends upon the device itself. A prominent part of breath actuated DPI was the yield of respirable particles (<5 μm diameter) from the device will proportional to airflow rate through the device. The key factor is rapid inhalation to deaggregate drug and carrier complexes or large agglomerates of drug particles. The motion of inhaled air supplies all of the energy associated with entrainment and deaggregation [16] of the powder particles. The powder was delivered during a single, large breath of the patient’s inspiration. The lung inhalation of dry powder inhaler required dispersion of powder particles into the individual particles. This was attained by adhesive forces between particles in the bulk powder [17]. The prediction of adhesive forces is not possible in pharmaceutical dry powder particles. The deposition of whole dose of DPI in lung was accessed with maximal and submaximal inspiratory effort and thus causes particle detachment from the carrier [18].

The values are represented as mean±SD for n=20. SD: Standard deviation

FTIR spectroscopy was used in compatibility studies to evaluate preformulation characteristics including formulation composition and poor interaction between carrier molecules. Salbutamol sulphate was determined to be stable with the formulation of trials K1, K2, K3 and K4 from the observation of FTIR spectra shows wave number (cm-1) vs Transmittance (%). The In vitro deposition [19] of powder particle in the lung were evaluated by powder particle distribution in the stages of Anderson cascade impactor. The distribution of powder (microsphere) were graphically demonstrated in fig. 3a-d. The respiratory fraction and mass median aerodynamic diameter [20,21] of trial K1-K4 were given in Table 5. 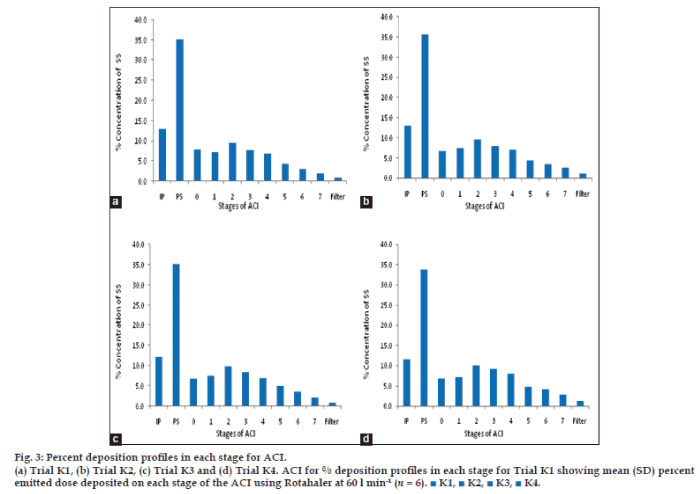 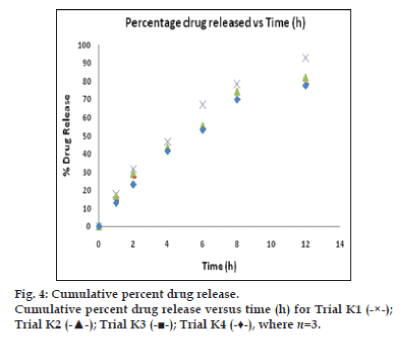