Cisplatin, a platinum compound, exerts its cytotoxic effects by coordinating to DNA where it inhibits both replication and transcription, and induces programmed cell death. It is used in the treatment of non-small cell lung cancer. In the present study, an attempt was made to achieve better treatment of lung cancer by direct lung delivery of cisplatin microparticulate systems, which helps to localize the drug in the lungs, and also provide sustained action. Cisplatin-loaded chitosan microspheres were prepared by emulsification and ionotropic gelation method, and characterized for drug content, particle size, densities, flow properties, moisture content, and surface topography by SEM and in vitro drug release was evaluated in simulated lung fluid at 37 0 at pH 7.4. The respirable or fine particle fraction (FPF) was determined by using twin stage impinger (TSI). Further stability evaluation of cisplatin-loaded DPI systems was carried out at 25 0 /60% RH and at 40°/75% RH.

Lungs provide a large surface area and hence can be explored as a potential site for the systemic delivery of drugs. Also, for local effects, the mode of inhalational delivery system is noninvasive, which requires relatively small doses for efficacy, and avoids first pass metabolism [1-7].

Delivery platforms such as microspheres, liposomes, complexes with cyclodextrins, and conjugation with macromolecules have been explored for inhalational application [8]. Dry powder inhalation (DPI) technology is a particularly attractive approach over chlorofluorocarbons-based systems. DPI devices such as single-dose (e.g., Rotahaler®) to multiunit dose devices (in a blister pack) are available in the market. The DPI delivery systems are designed to ensure generation of a fine particulate system, which can overcome the impaction barrier that prevents the entry of any foreign matter inside the lungs and thereby deliver the therapeutic agents into the lungs.

Cisplatin is mainly used in treatment of non-small cell lung carcinoma, in combination with gemcitabine, paclitaxel, docetaxel, etoposide or vinorelbine [9]. Cisplatin shows its anticancer activity by coordinating to DNA where it inhibits both replication and transcription, and induces programmed cell death [10].

In the present study, chitosan-loaded cisplatin microspheres were prepared and evaluated for dry powder inhalation delivery of cisplatin for local action of the drug in lungs, and thereby achieve improved therapy in lung cancer.

Microspheres were prepared by emulsificationionotropic gelation and heat crosslinking method as shown in fig. 1. Aqueous solutions of chitosan and cisplatin (in 0.5% w/v acetic acid) were emulsified in oil phase (100-200 ml) consisting of dichloromethane and light liquid paraffin using homogenizer (Silverson, India) for 15 min. Span 80 was used as an emulsifier and lecithin as a coemulsifier and deaggregating agent. Crosslinking solution (CA) was added to this emulsion, and homogenization was continued for another 30 min. Slow addition of this emulsion into previously heated and maintained (120°) light liquid paraffin (50 ml) on a rotamantle (Remi, India) was carried out, and stirring was continued for another one hour. This emulsion was then allowed to cool to room temperature with continuous stirring at same speed. Centrifugation at 10000 rpm for 10 min was carried out in order to separate the microspheres. To remove the oil, sediment was dispersed in diethyl ether, and this dispersion was again centrifuged for 3 min at the same speed (n=3). The sediment obtained was then dried in oven at 50-60º, passed through 100-mesh sieve and stored in a glass vial in a vacuum desiccator. Various parameters such as concentration of crosslinking agent citric acid, concentration of drug, and effect of molecular weight of chitosan were optimized with respect to drug content and particle size. DPI formulations of microspheres were prepared with and without carrier. Lactohale® 200 and 100 were mixed in equal quantities in a polybag, and this mixture was sieved to obtain particles in the range of 63-90 µm. The microspheres were mixed with lactose carrier (63-90 µm) in mass ratio of 1:6, using a cyclomixer (Remi, India) for 5 min; further, the mixture was passed through 100# and stored in a glass vial in a desiccator.

GC (Varian CP-3800-GC chromatograph with FID Detector) was used for the determination of the level of residual organic solvents (IPA, acetone and DCM) in the microsphere samples. The analysis were performed by the static head-space method using Varian WS m software.

The dissolution test for cisplatin-loaded DPI system was performed by the flow through dissolution method (USP Apparatus 4) using Sotax Dissotest CE70 (Sotax, Basel, Switzerland) (n=3). The dissolution was carried out in simulated lung fluid [11] (SLF) pH 7.4; maintained at temperature 37±0.2º with the flow rate 0.2 ml/min. The collection of sample fractions was carried out at predetermined intervals; the drug content of aliquot fractions was determined by measuring the absorbance at 301 nm against blank. The amount of drug released was extrapolated from the standard curve for cisplatin in SLF (pH 7.4).

The respirable fine particle fraction (FPF) of the cisplatin microspheres was determined using a twin-stage impinger, apparatus A (TSI), official in British Pharmacopoeia. The Rotahaler®, a single unit dose dry powder inhaler device, was chosen to characterize the aerosol performance of the powder samples. All studies were carried out at constant flow rate of 60±5 l/min. The fractions collected in each stage were kept overnight in DMF for complete extraction of drug and after filtration, the drug deposited at different stages was analyzed for drug content by UV spectrophotometry.

Stability evaluation of selected batch of microspheres was carried out at 25±2°, 60% RH for 12 months and 40±2°, 75% RH for six months. Samples were evaluated for drug content, particle size, FPF, and in vitro release profiles.

In vitro cytotoxicity of the developed microspheres was evaluated in A549 and HOP 62 lung cancer cell lines. The IC50 value was calculated after plotting molar concentration versus growth inhibition (%).

Cisplatin is a chemotherapeutic agent, used in the treatment of various types of cancers. It is administered as intravenous infusion in saline. Microparticulate DPIs, such as microspheres, can be explored for patient friendly route of administration and sustained delivery of cisplatin by pulmonary drug delivery [12]. Most of the preparation methods for microspheres report glutraldehyde as crosslinking agent but due to toxicity of glutraldehyde, researchers are exploring alternate methods like spray drying and ionic gelation using agents like citric acid, sodium sulfate, and tripolyphosphate [13,14].

In the present investigation, chitosan microspheres were prepared by emulsification and crosslinking method. Citric acid was used as a crosslinking agent. Table 1 represents optimization of various variables such as amount of crosslinking agent, concentration of drug, and molecular weight of chitosan, which showed significant effect on particle size, drug content, and dissolution. The characteristic XRD spectra of pure drug (cisplatin), chitosan microspheres and physical mixture of drug, and chitosan are presented in (fig. 3). Characteristic crystalline peaks of cisplatin of pure drug indicates the presence of crystalline cisplatin. Peaks of cisplatin crystals are also present in physical mixture (reduced in intensity). However, XRD pattern of the cisplatin microspheres did not show any peaks. These results indicated that cisplatin is present in the amorphous form after its encapsulation in the chitosan?CA matrix. 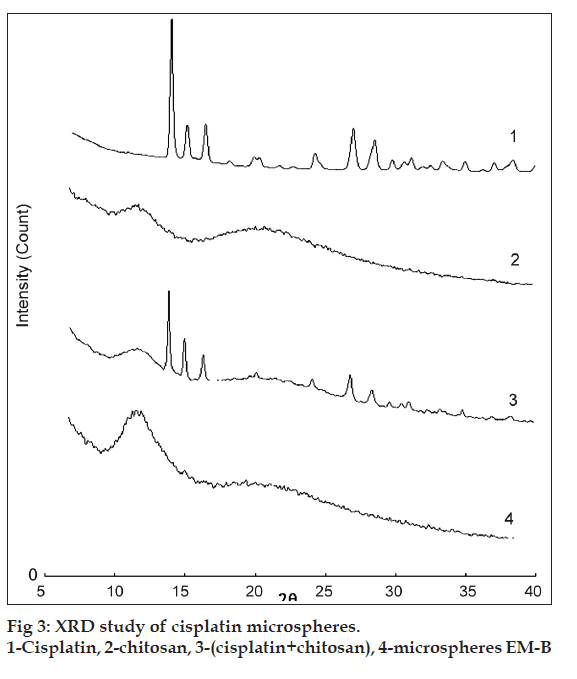 The dissolution studies of chitosan microspheres of cisplatin were performed in SLF (pH 7.4) using flow through cell. In the present investigation, results indicate that the release behavior of cisplatin is related to interaction of CA with chitosan. Addition of CA during the preparation of the microspheres resulted in prolongation of release. High crosslinking density of chitosan?CA matrix might have resulted in less swelling ability; therefore, the release of the drug is decreased [17]. The release behavior of cisplatin from chitosan?CA microspheres has shown a biphasic release pattern with an initial burst effect, followed by a subsequent slower release. Initial burst release from cisplatin microspheres (37% in 1 h) may be due to drug adhered on surface of microspheres. After initial burst, drug was released in sustained manner up to 12 h from the microspheres compared to free drug (released immediately in SLF) as shown in fig. 4. The dissolution data were plotted as the percentage of cisplatin release against the square root of time. Linearity was observed with the plot because the correlation coefficient (R2) was 0.911. This indicates that the release of cisplatin from chitosan? CA microspheres followed Fick?s law of diffusion. Similar finding by Nishioka et al. has been reported for diclofenac sodium from chitosan microspheres [17]. 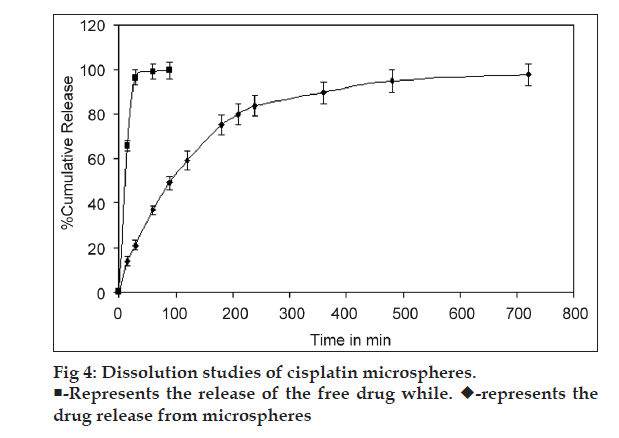 Residual organic solvents can change the cystallinity of the bulk drug substance, leading to changes in dissolution properties and problems with formulation of the finished product. In the present investigation, residual solvent observed in microspheres is isopropyl alcohol 0.5 ppm and dichloromethane 24.8 ppm, which are far below the ICH limits for isopropyl alcohol (5000 ppm) and dichloromethane (600 ppm). During the process of preparation, these microspheres were heated to 120° for 1 h and further dried in oven (50-60°), which may have resulted in very low and acceptable levels of these solvents.

In the present study, in vitro inhalation performance of microspheres was evaluated using twin stage glass impinger. Chitosan microspheres, when formulated as DPI formulation without using any carrier particles, resulted in low FPF value. This observation describes the importance of the addition of lactose carrier in formulating the DPI. In this study, the lactose was sieved, and only 63-90 µm fraction was used, effect of fines was ignored, which has been reported to increase the in vitro performance of DPI formulations [18-20]. The FPF of cisplatin was significantly improved when lactose was used as carrier. The cisplatin microspheres showed higher FPF value compared to uncoated cisplatin both with and without lactose. The data revealed that the microspheres:lactose mass ratio of 1:6 significantly improved the DPI performance of both plain drug and microsphere-based formulation.

Stability studies of the developed DPI formulation filled in hard gelatin capsules (size 3) and placed in HDPE container was carried out kept at 40°/75% RH and 25°/60% RH. No changes in color, odor, or physical appearance were evident upon storage. The particle sizes of samples stored at 25°/60% RH and at 40°/75% RH are reported in Table 3 and have not changed significantly. The FPF value was slightly decreased as shown in Table 3. This could be attributed to an increase in moisture content and subsequent increase in particle size or agglomeration during storage (Table 3). No significant change in drug content of samples kept at 40°/75% RH and 25°/60% RH was evident, indicating the stability of formulation for a period of six months.

Cisplatin has shown cytotoxic effect on A549 human lung cancer cells but was unable to attain IC50 values for HOP-62 human lung cancer cells (Table 4). Similar observations were reported by Liang et al., and have confirmed that human lung adenocarcinoma cells are resistant to the cytotoxic effects of cisplatin [21]. Formulation process especially does not change any cytotoxic effect of cisplatin in chitosan matrix and hence retained its cell-killing effect. Microspheres showed higher IC50 value compared to free drug due to slower release from the chitosan matrix.

In the present investigation, cisplatin-loaded chitosan microspheres were successfully developed, optimized, and evaluated for its suitability for pulmonary sustained drug delivery. Further in vivo safety and deposition studies in suitable animal models will give better insight for clinical applications of the inhalable cisplatin microspheres.