Inflammatory bowel diseases (IBD) include two major forms of chronic intestinal disorders namely Crohn’s disease (CD) and ulcerative colitis (UC). CD mostly affects the ileum and colon while UC involves the rectum and may affect a part or the entire colon [1-3]. Colon targeting is essential to provide more effective therapy to colon diseases, such as irritable bowel syndrome, colon cancer and IBD [4-6]. A colon-specific drug delivery system should prevent drug release in the stomach and small intestine and initiate abrupt onset of drug release upon entry in to the colon [7,8].

The microsponge drug delivery system has many favourable characteristics such as enhanced stability due to high degree of crosslinking, reduced side effects due to targeted and modified drug release, and also protects the entrapped active ingredients from physical and environmental degradation, which makes it a suitable drug delivery carrier. Microsponges are also capable of delivering pharmaceutical active ingredients efficiently at a minimal dose to targeted site, which reduces severe systemic degradation [9,10]. Mesalamine (5-aminosalicylic acid, mesalazine) is an antiinflammatory drug used to treat IBD [11], which is readily metabolized in the intestinal mucosal wall and in the liver and this metabolism can be overcome by formulating mesalamine as colontargeted microsponges prepared using acid resistant polymers [12].

Mesalamine was received as a gift sample from Agro Chemicals Ltd., Hyderabad, India, while Eudragit S100, Eudragit L100, Eudragit RS100 were gift samples from Hetero Labs, Hyderabad, India. Polyvinyl alcohol and ethanol were procured from Loba Chemie, and Qualigens Fine Chemicals, Mumbai, India, respectively. All other ingredients used were of analytical grade, and were used as procured.

The FTIR spectra of samples were obtained using a FTIR formulations spectrophotometer (Perkin Elmer). Pure drug, individual polymers and optimized formulations were subjected to FTIR analysis. About 2-3 mg of sample was mixed with dried potassium bromide of equal weight and compressed to form a KBr disk. The samples were scanned from 500 to 4000 cm-1. FTIR spectra of the drug, physical mixture of drug and Eudragit S100, formulation ES1 were recorded in potassium bromide disc using a Shimadzu Model 8400 FTIR spectrometer to ascertain compatibility.

The morphology and surface characteristics of the microsponges were studied using scanning electron microscopy (SEM). All the samples were coated with gold palladium alloy under vacuum. Coated samples were then examined using LEO 430 SEM analyser [13-15]. For the determination of actual drug content, the weighed amount of drug-loaded microsponges (100 mg) was kept in 100 ml phosphate buffer pH 6.8 for 12 h with continuous stirring. The samples were filtered using Whatman filter and the samples were analysed at 300 nm against blank using a UV-spectrophotometer (UV 1700, Shimadzu) [16,17].

In vitro release studies were carried out in a USP basket apparatus with stirring rate 50 rpm at 37±0.5°. Initial drug release was carried out in 900 ml of 0.1 N HCl for 2 h followed by in phosphate buffer pH 6.8 for the next 8 h. Samples were withdrawn at regular intervals of time and each time were compensated by adding equal volume of fresh dissolution medium to maintain the sink condition. The samples were analysed spectrophotometrically at a wavelength of 300 nm. Dissolution tests were performed in triplicate for each sample [9].

The optimized microsponges were further compressed into core tablets consisting of drug-loaded microsponges containing 300 mg drug and other excipients like lactose and magnesium stearate using the direct compression technique. All tablet constituents were weighed and mixed in a mortar for 15 min. The final powder mix is compressed using round flat punches on a tablet punching machine by applying required compression pressure. Core tablet formulations are given in Table 2 [18].

Three tablets were picked from each formulation randomly and thickness was measured individually. It is expressed in millimeter and standard deviation (SD) was also calculated. The hardness of the tablets was determined using a Pfizer hardness tester. It is expressed in kg/cm2. Three tablets were randomly picked and hardness of the same tablets from each formulation was determined. The mean and SD values were also calculated [19]. Friability of tablets was determined using a Roche Friabilator. Ten tablets were weighed (Winitial) and transferred into the friabilator. The friabilator was operated at 25 rpm for 4 min or for 100 revolutions [19]. The tablets were weighed again (Wfinal). The % friability was then calculated using the Eqn., F = Winitial–Wfinal/Winitial×100.

In vitro dissolution studies were carried out using the USP XXIII tablet dissolution test apparatus. In vitro drug release studies of colon-specific tablet formulations were carried out using USP basket apparatus with stirring rate 50 rpm at 37±0.5°. For the first 1 h, simulated gastric fluid of pH 1.2 was used, followed by a mixture of simulated gastric and intestinal fluid (pH 4.5) for the next 2 h, after which simulated intestinal fluid of pH 6.8 for 2 h followed by simulated intestinal fluid of pH 7.5 for 1 h was used. Pectinex Ultra SP-L was added to the dissolution medium at 6th h in order to simulate the enzymatic action of the colonic bacteria. Samples were withdrawn periodically and compensated with an equal amount of fresh dissolution media. The samples were analysed for the drug content by measuring absorbance at 300 nm using a UV spectrophotometer [19].

FTIR spectra were recorded to assess the compatibility of the drug and excipients. FTIR spectra of the drug, physical mixture of drug and Eudragit S100 and optimized formulations ES1 were given in Figure 1. It is clear from the FTIR that the characteristic peaks of the drug were also present in the formulation depicting no incompatibility between the drug and polymers in the formulation. The microsponge formulations ES1, EL1, ERS1 were visualized by SEM to assess the morphology of microsponges. SEM image revealed spherical and porous surface as shown in Figure 2. 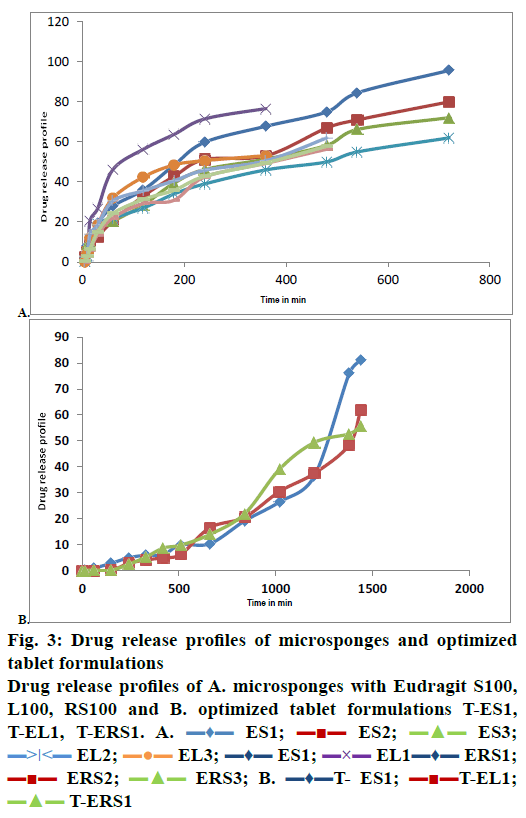 The results of dissolution studies indicated that formulations T-ES1 releases 81.27 % of drug at the 24th h, T-EL1 releases 62.05 % and T-ERS1 released 55.59 % of drug in 24 h. Figure 3B showed the drug release profiles of all formulations and tablets prepared. From the data obtained, it could be concluded that the formulation T-ES1, which released 81.27 % drug in 24 h was the best formulation.

In vitro drug release and release mechanism were studied for these three formulations. Release kinetics followed zero order kinetics and the release mechanism was observed to be the diffusion mechanism. The type of diffusion was super case-II transport, hence the prepared microsponge tablets, T-ES1, T-EL1, and T-ERS1 were found to extend drug release as expected (Table 5). When these three formulations were compared with each other, T-ESI was found to release the drug to the maximum extent (82.17 %) at the end of 24 h.

The present work aimed to develop colon-targeted mesalamine-loaded microsponges to serve the purpose of increasing the drug release by using ethanol or Eudragit as the internal phase and 5 % w/v PVA as the external phase. Nine microsponges were prepared using three different polymers, among these; three formulations, ES1, EL1 and ERS1 were selected and their dissolution profiles were compared. Among those three formulations, ES1 gave acceptable results. These three selected formulations were sieved and compressed in to tablets, T-ES1, T-EL1, T-ERS1 and the compressed tablets were evaluated. Among the 3 batches of tablets formulations, T-ES1 gave best release rate of mesalamine, with highest percent of the drug released at the end of 24 h compared to the other 2 tablets. It was found that the drug release followed zero order release kinetics and diffusion with case-II transport mechanism. These results indicated that microsponges could be used as efficient means of formulation to enhance drug delivery and bioavailability of a drug in the colon and this approach could produce efficient carriers for colon targeting.

The author thank full to DST-WOSA for providing financial assistance.