The present investigations report the application of SABER® technology in the development of a one-month depot injection of iloperidone. SABER® is a new in situ gel formulation technology for sustained release drug delivery, which precludes the use of large amounts of toxic organic solvents in the formulation. Traditionally in the in situ gel forming technology-based depot injections, expensive polymers such as polylactic acid and poly(lactic-co-glycolic acid), and a class 2 solvent like N-methyl-2-pyrrolidone have been used to control the rate of drug release and dissolve the drug and polymer, respectively. In the present investigations, however, no such release retarding polymers were used, moreover, the formulation was developed using a limited amount of dimethylsulphoxide, a class 3 solvent. Formulation variables were optimized by D-optimal mixture design to obtain the depot formulation with a consistent drug release for one month. The composition of sucrose acetate isobutyrate, and dimethylsulphoxide were taken as input variables and cumulative drug release at various time points as response variables. The optimized formulation contained 81.718 % sucrose acetate isobutyrate and 18.282 % dimethylsulphoxide and produced a consistent drug release profile with 85.71 % cumulative drug release in 30 days without any significant burst release.

Iloperidone is a new atypical antipsychotic drug approved by USFDA in 2009 for the treatment of schizophrenia [1]. It is effective against positive as well as negative symptoms of schizophrenia and has many specific advantages over other atypical antipsychotics. It has a low tendency to induce extrapyramidal symptoms and is well tolerated [2]. Presently it is available as a tablet dosage form in 1-12 mg strengths with a maximum daily dose of 24 mg. Its elimination half-life is 18 h in case of extensive CYP2D6 metabolizers and 33 h in poor CYP2D6 metabolizers [3]. However, despite having a half-life of 18-33 h, it needs to be administered twice a day to minimize the orthostatic hypotension in the uptitration phase [1]. Now-a-days antipsychotic drug therapy is clinically preferred with depot injections as they ensure uninterrupted and consistent drug delivery for 1-3 mo. Presently no depot formulation of iloperidone is available, though a microcrystals-based depot preparation is under development and a US patent has been granted to Novartis Pharmaceuticals [4].

Sucrose acetate isobutyrate (SAIB) is a US FDA approved food additive with a safe human daily intake of up to 20 mg/kg [8]. It is extensively metabolized in the body to sucrose and partially acylated sucrose, which are readily absorbed and subsequently eliminated from the body [9]. Its extravascular parenteral administration has been shown to be biocompatible and well tolerated in rats through intramuscular and subcutaneous routes with no signs of serious inflammation or necrosis in histological examination at the site of injection [10,11]. For quite some time, it is being tried in the formulation designing of in situ gel forming depot injections and has been successfully evaluated to provide sustained drug delivery of an anesthetic agent in post-surgical pain management through depot injection [12]. The SAIB-based in situ gel forming depot injections are economical formulations also offering the benefit of ease of manufacturing [13]. The SABER® systems use SAIB along with a solvent and a release modifier for sustained release of therapeutic agents [10]. SAIB is an extremely hydrophobic viscous liquid but it forms a low viscosity fluid when dissolved in some organic solvents [14]. If the solvent is water miscible, the resulting fluid can be used as a vehicle for designing long acting intramuscular or subcutaneous in situ gel forming depot injection. The solvent present in the formulation would eventually diffuse out when it would come in contact with aqueous biological fluid present at the site of injection leaving a highly viscous biodegradable SAIB-drug matrix, which would act as a drug depot for extended drug release in vivo [15,16].

Systematic product development based on quality by design has become a well-established approach in the formulation development [17]. The prime objective of quality by design is to achieve performancebased quality attributes in the product [18]. Several experimental designs are available with their specific applications. Mixture designs are used in the designing of formulations containing multiple excipients and in which the properties of the finished product do not depend on the amount of each excipient present but on their proportions, and the sum total of the proportions of different excipients is unity without any negative fraction [19]. The D-optimal mixture design was employed in the present studies because it involves smaller number of runs and thereby reduces development cost [20].

Most of the reported and marketed in situ gel forming implants employ polylactic acid (PLA), poly(lacticco- glycolic acid (PLGA) and their derivatives as biodegradable release retarding polymers for controlling the drug release from the depot formed in situ [10,11,21,22]. These polymers are, however, quite expensive and add to the cost of the developed depot formulation. These products invariably also use a class 2 organic solvent like N-methyl-2-pyrrolidone (NMP), which is extremely toxic. In the present investigations an attempt was made to develop a long acting depot injection of iloperidone using SAIB as release retarding material, which is much cheaper than PLGA, and dimethylsulphoxide (DMSO) as solvent, which is a class 3 solvent and safer as compared to NMP.

SAIB was supplied by M/S Eastman Chemical Company, Kingsport, USA and iloperidone by M/S Sun Pharmaceutical Industries Ltd., Mumbai, India as gift samples. All other chemicals and solvents used were of reagent grade and purchased from market.

The solubility of iloperidone was determined in purified water, different organic solvents, drug release test medium comprising of phosphate buffered saline (PBS) pH 7.4+0.5 % sodium lauryl sulphate (SLS)+0.05 % sodium azide, and drug release test medium containing DMSO and SAIB in the same ratio as used in the final formulation. An excess quantity of drug was added to each of the above solvents in stoppered glass test tubes, which were kept on a shaker water bath at room temperature for 48 h. The saturated solutions were filtered through 0.45 μm membrane filter and the drug concentration was estimated spectrophotometrically at 276 nm wavelength on a double beam UV/Vis spectrophotometer (UV-1700, Shimadzu, Japan).

Weighed quantity of SAIB was dissolved in a measured volume of ethanol/triacetin/DMSO using a vortex mixer. Iloperidone powder was weighed and added to the SAIB solution and mixed well to get a uniform suspension. Different formulation batches were designed with varied concentrations of SAIB and solvent.

The formulated product was injected into a 15 ml screwcapped plastic tube containing 10 ml drug release test medium, which on coming in contact with aqueous fluid, formed an in situ gel depot matrix. The tubes were placed in an incubator shaker bath maintained at a temperature of 37 ± 1° and operated at 60 ± 5 rpm [23]. At different time intervals, entire 10 ml drug release fluid was pipetted out and replaced with 10 ml fresh drug release test medium. The withdrawn samples were analysed on a double beam UV/Vis spectrophotometer at 276 nm.

The most important objective of long acting depot injection designing is to achieve the requirement of sustained drug release up to the period of dosing regimen. In the present formulation optimization studies, the upper and lower levels of the input variables were decided on the basis of initial screening trials. A statistical design of experiment (DOE) was planned in which the percent concentration of the formulation excipients, i.e., SAIB and DMSO was selected as input variable and the cumulative percent drug release at various time points was selected as response variable. The optimization was done by D-optimal mixture design using Design Expert software (version 7.1.5, Stat-Ease Inc., Minneapolis, Minnesota, USA).

The iloperidone powder was in micronized form with an average particle size of 2.64 μm (surface mean) and 7.7 μm (volume mean) with d50 and d90 values of 6.08 and 14.90 μm, respectively. The solubility of iloperidone was determined in purified water and various other solvents and reported in Table 1. As the solubility of iloperidone in water and PBS (pH 7.4) was poor, 0.5 % SLS was added to PBS as a surfactant to attain sink conditions in drug release study. Because the studies were to be conducted for a long time period, 0.05 % sodium azide was also added in the release test medium as a preservative. Iloperidone was stable in the release test medium for one month.

SAIB is a very viscous fluid, but when dissolved in even a small amount of certain organic solvents it forms a low viscosity solution. In the present studies, SAIB solutions were prepared in DMSO, triacetin, and ethanol, respectively. The in situ gel forming depot injections were formulated by dispersing iloperidone in each of the above SAIB solutions (IL/IS/PRE1-3). A plain iloperidone dispersion in drug release test medium without SAIB solution was used as the control (IL/IS/PRE4). The composition of formulations designed for pre-optimization studies is shown in Table 2. The final selection of solvent was done on the basis of in vitro drug release from the respective solvent-based formulation as well as their toxicological considerations. The formulated depot injections were subjected to in vitro drug release study for 30 d. The drug release data are recorded in Table 3.

SAIB is soluble in some water miscible organic solvents, like ethanol, NMP, DMSO, and triacetin. Out of these solvents, the DMSO and ethanol belong to class 3 category of solvents, which is regarded as safe and less toxic solvent category with lower risk to human health. The NMP, though, is a good solvent for SAIB but it belongs to class 2 solvent category, the use of which is restricted in pharmaceutical products due to its inherent toxicity [24]. Due to these reasons, NMP was not included in the present studies. The relevant particulars of all the above four solvents with regards to their safety considerations are presented in Table 4.

FDA is Food and Drug Administration; IIG is inactive ingredients guide, GRAS is generally recognized as safe; NR is not reported; IV is intravenous; IP is intraperitoneal; SC is subcutaneous and IM is intramuscular

Though triacetin is GRAS listed, but it is not included in IIG list for any parenteral product [25]. Considering the LD50 values also it stands inferior to DMSO and ethanol. On comparing the LD50 values, DMSO was found to be a much safer solvent than even ethanol [26]. The in vitro drug release profile of the respective solventbased product as well as their safety considerations as detailed above favored the selection of DMSO as the most functionally effective and safest solvent option among all the four solvents. The composition of SAIB and DMSO was optimized by D-optimal mixture design using Design Expert software. The independent variables along with their levels selected in the designing of depot injection are listed in Table 5. 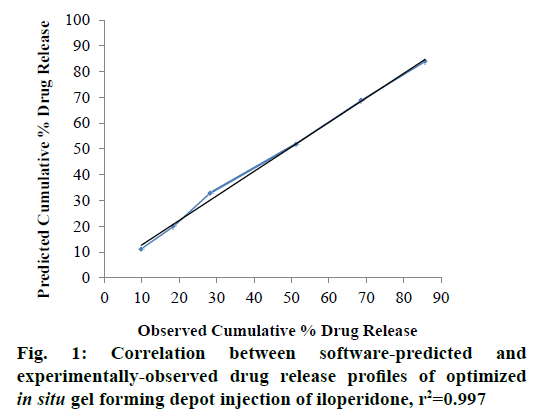 In summary, the SABER® technology was explored in this study to develop an in situ gel forming one month depot injection formulation of iloperidone using D-optimal mixture design technique. The Design Expert software predicted the optimum formulation composition comprising of 81.718 % SAIB and 18.282 % DMSO. The optimized injection formulation experimentally yielded a zero order drug release profile with 85.71 % cumulative percent drug release in 30 d. The experimentally-observed and software-predicted drug release profiles were in good agreement with a correlation coefficient of 0.997.