A modified Pulsincap dosage form of metronidazole was developed to target drug release in the colon. Bodies of hard gelatin capsules were treated with formaldehyde keeping the caps as such. Metronidazole pellets prepared by extrusion-spheronization method were incorporated into these specialized capsule shells and plugged with polymers guar gum, hydroxypropylmethylcellulose 10K, carboxymethylcellulose sodium and sodium alginate separately at concentrations 20 mg, 30 mg and 40 mg. The filled capsules were completely coated with 5% cellulose acetate phthalate to prevent variable gastric emptying. All the formulations were assayed to determine drug content and the ability of the modified Pulsincap to provide colon-specific drug delivery was assessed by in vitro drug release studies in buffer pH 1.2 for 2 h, pH 7.4 (simulated intestinal fluid) for 3 h and pH 6.8 (stimulated colonic fluid) for 7 h. The results indicated that significant drug release occurred only after 5 h from the start of experiment. Thus, metronidazole could be successfully colon targeted by the use of the modified Pulsincap, thereby reducing systemic side effects.

Amoebiasis is an infection of the large intestine caused by the protozoan parasite, Entamoeba histolytica. Metronidazole and tinidazole are the most preferred drugs of choice for intestinal amoebiasis and these drugs are to be delivered to the colon for their effective action against the trophozoites of E. histolytica that reside in the lumen of the caecum and large intestine and adhere to the colonic mucus and epithelial layers. But the pharmacokinetic profile of metronidazole indicates that the drug is absorbed completely after oral administration, reaching a concentration of about 10 μg/ml in plasma approximately 1 h after a single 500 mg dose.

Conventional tablets of metronidazole provide minimal amount of drug for local action in the colon, still resulting in the relief of amoebiasis, but with systemic side effects [1]. The various approaches available for colon specific drug delivery include coating with pH-dependent polymers, design of timed-release dosage forms, and the use of carriers that are degraded exclusively by colonic bacteria. The timed-release systems release their load after a predetermined time period of administration. In humans, studies have shown that, after leaving the stomach, a formulation arrives at the ileocaecal junction in about 6 h after administration. Thus once gastric emptying has occurred; a time-based system can be employed for the targeted release [2]. Based on this concept, a modified pulsincap dosage form was developed. This capsule consisted of a water insoluble body and a soluble cap. The drug formulation was incorporated within the body, plugged with a polymer plug and the entire capsule was enteric coated to prevent variable gastric emptying. The enteric coating prevents disintegration of the soluble cap in the gastric fluid. On reaching the small intestine the capsule loses its enteric coating and the polymer plug inside the capsule swells to create a lag phase that equals the small intestinal transit time. This plug ejects on swelling and releases the drug from the capsule in to the colon. Depending upon the concentration of the polymer plug used, the time at which this occurs can be controlled [3].

The rationale of this study is to design metronidazole pellets-loaded modified Pulsincap dosage form that can be targeted to the colon in a time-dependent manner. Colonic delivery of metronidazole could prevent systemic side effects and subsequently a lower dose of the drug may be sufficient to treat protozoal infections.

Metronidazole pellets were prepared using the extrusion- spheronization method [4]. The filler used was Avicel PH102. Bodies of hard gelatin capsules (Size 0) were placed on a wire mesh. Formaldehyde (15%) was taken in to a dessicator and potassium permanganate was added to it until vapors were produced. The wire mesh containing the bodies was then exposed to formaldehyde vapors. The reaction was carried out for 12 h [5] after which the bodies were removed and dried at 50° for 30 min to ensure completion of reaction between gelatin and formaldehyde vapors. The bodies were then dried at room temperature to ensure removal of residual formaldehyde.

Pellets equivalent to 150 mg of metronidazole were accurately weighed and filled into the treated bodies by hand filling. Capsules containing the drug pellets were then plugged with different polymers like guar gum, . carboxymethylcellulose sodium, hydroxypropylmethylcellulose 10K and sodium alginate, separately, at different concentrations. The filled capsules were completely coated with 5% cellulose acetate phthalate in acetone, to prevent variable gastric emptying. Coating was repeated until an 8-12% increase in weight was obtained. % weight gain of the capsules before and after coating was determined.

Surface morphology of the pellets was studied using LEICA S440i scanning electron microscope after coating them with gold vapors. Morphological analysis was carried out at different magnifications. The Carr’s index and angle of repose of the pellets were also determined. For disintegration studies, 10 capsules (with treated bodies and untreated caps) were randomly selected. These capsules were then subjected to disintegration studies at room temperatures in buffers of pH 1.2, 7.4 and 6.8. A single capsule was placed in the buffer solution and stirred for 24 h. The time taken for the capsule to disintegrate was noted. All the formulations were assayed to determine the drug content (Table 1).

For In vitro release profile, dissolution studies were carried out for 12 h, for both the plain drug pellets and the Modified Pulsincap dosage form according to USP apparatus I (Basket) method. The dissolution media used were: Acidic buffer, pH 1.2 for 2 h (since the average gastric emptying time is 2 h), Phosphate buffer, pH 7.4 for 3 h (since the average small intestinal transit time is 3 h), Phosphate buffer, pH 6.8 buffer for subsequent hours (to simulate colonic fluid). The dissolution media was rotated at 100 rpm. Samples (5 ml) were withdrawn at specific time intervals and equal volume of media was replaced immediately. Withdrawn samples were then filtered, suitably diluted and the amount of metronidazole dissolved was determined by UV absorption at 277 nm [6] (for pH 1.2 buffer) and 320 nm (for pH 7.4 buffer and pH 6.8 buffer). The cumulative amount of drug released was calculated.

Surface morphology studies revealed that the pellets were discrete, spherical in shape and devoid of cracks (fig. 1). The pellets exhibited good flow properties as evident from Table 2. When the capsules were subjected to solubility studies in different buffers, the untreated caps disintegrated within 10 min in all the media whereas the treated bodies remained intact for about 24 h. The percentage drug content of the formulations was found to be between 95.14% to 102.08% of metronidazole, which was within the acceptable limits. Fig. 1: SEM photograph showing a close up view of a single pellet

Plain metronidazole pellets and the modified Pulsincap formulations were subjected to preliminary in vitro release studies for a period of 12 h. Dissolution was carried out in three media, namely simulated gastric fluid (acidic buffer, pH 1.2) for the first 2 h, simulated small intestinal fluid (phosphate buffer pH 7.4) for 3 h and simulated colonic fluid (phosphate buffer pH 6.8) for the subsequent hours. The two pH buffer systems namely pH 7.4 and pH 6.8 were selected only to mimic the conditions in the small intestine and colon and they did not have any effect on the drug release mechanism. With all the formulations, there was absolutely no drug release in simulated gastric fluid, thus indicating the efficiency of 5% cellulose acetate phthalate enteric coating.

The in vitro dissolution profiles of plain metronidazole pellets and the modified Pulsincap formulations during the 12 h study were shown in figs. 2 and 3. From the graphical representation it is revealed that the drug release from the pulsincap had started roughly after 5 h from the start of the experiment. 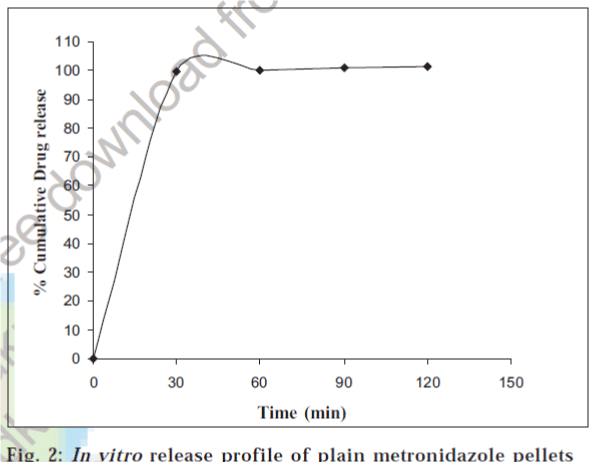 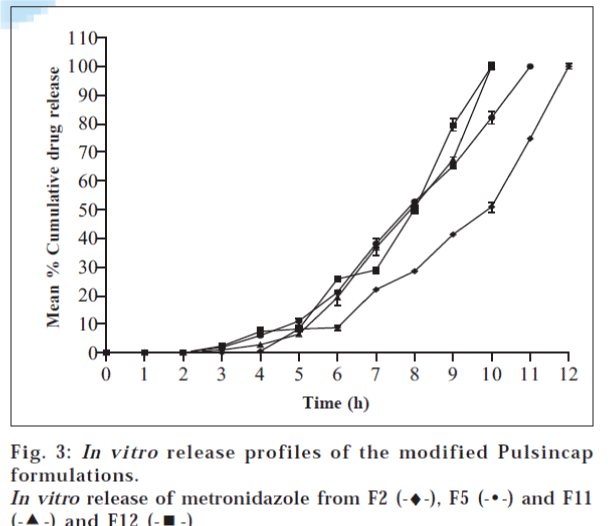 From the data presented in Table 3, it is evident that the release of metronidazole from Modified Pulsincap is proportional to the concentration of hydrogel. Formulations F2 (30 mg guar gum), F5 (30 mg SCMC), F11 (30 mg sodium alginate) and F12 (40 mg sodium alginate) are suitable for colonic delivery of metronidazole as they could minimize drug release in the simulated small intestinal fluid and release major portion of the drug in the simulated colonic fluid, when compared to the other formulations. Therefore, the study proves that metronidazole can be successfully colon targeted by the use of a time-dependent modified Pulsincap formulation.

Table 3: In Vitro Release Profile Data Of The Formulations

The authors wish to thank the American Association of Accepted 14 January 2007 Government College of Pharmacy Alumni for having instituted the STARS award, the research grant that has helped in the smooth proceeding of this research work. We also thank M/s Eros Pharma, M/s KAPL and M/s Ce-Chem for their generous gift samples of the drug and polymers.