Tizanidine HCl is a centrally acting α-2 adrenergic agonist muscle relaxant with a slightly bitter taste having short half-life of 2.5 h. In the present study effect of co-processed excipient bases in formulation of orodispersible tizanidine HCl tablets by direct compression method was investigated. Co-processed excipient of microcrystalline cellulose with SSL-hydroxypropylcellulose was prepared using spray drier in 1:1, 1:2 and 1:3 ratio. Formulated tablets were evaluated for hardness, friability, in vitro disintegration time and in vitro drug release. Formulation F-3 prepared by addition of co-processed excipient base in ratio of 1:3 showed minimum disintegration time of 9.15±0.04 s and higher amount of drug release of 93.75% at the end of 15 min. Granules obtained by spray drying technique were found to be more spherical which improved its flow property and was supported by scanning electron microscope studies. Thermal studies indicated change in amorphous state, compatibility of drug in formulation was confirmed by fourier transform infrared studies. Analyses of drug release data indicated formulation followed first order kinetics. Inclusion of co-processed excipient base in formulation of orodispersible tablets enhanced disintegration significantly.

Oral route of drug administration is perhaps the most appealing route for the delivery of drugs [1]. Of the various dosage forms administered orally, the tablet is one of the most preferred dosage form because of its ease of manufacturing, convenience in administration, accurate dosing, stability compared with oral liquids and because it is more tamper proof than capsules [2,3]. The bioavailability of drug is dependent on in vivo disintegration, dissolution and various physiological factors. In recent years, scientists have focused their attention on the formulation of quickly disintegrating tablets. The task of developing tablets is accomplished by using suitable diluents and superdisintegrants.

Co-processing is defined as combining two or more established excipients by an appropriate process [3]. Co-processed excipient lead to the formation of excipients that granulate with superior properties compared with physical mixture of components or individual components [3,4]. Usually a combination of plastic and brittle materials is used for co-processing. This combination prevents storage of too much elastic energy during the compression, which results in a small amount of stress relaxation, reduced tendency of capping and lamination thereby attaining optimum tableting performance [5].

Tizanidine HCl is a centrally acting α-2 adrenergic agonist muscle relaxant. It has a halflife of approximately 2.5 h and absolute oral bioavailability of 40% [6]. The aim of this study was to formulate Orodispersible tablet of tizanidine HCl with sufficient mechanical integrity and to achieve faster disintegration in the oral cavity without water. To achieve this goal spray dried excipient base of microcrystalline cellulose with SSL-hydroxypropylcellulose grade was prepared and investigated.

Solid dispersion of tizanidine HCl with Eudragit E100 was prepared in ratio of 1:3 by solvent evaporation method. Accurately weighed quantity of Eudragit E100 was dissolved in methanol, weighed quantity of tizanidine HCl was further dissolved in above solution by stirring. The solution was transferred to a petridish, the solvent was allowed to evaporate overnight at room temperature. The mass obtained in each case was crushed, pulverized, and sifted through 80 mesh.

Feed suspensions of spray drying process were prepared with SSL-hydroxypropylcellulose and microcrystalline cellulose to have ratios of 1:1, 1:2, 1:3. The required proportions of powdered SSLhydroxyprpylcellulose and microcrystalline cellulose, which were previously passed through sieve no. 80, were dispersed in absolute alcohol to have the final solid content of feed suspension of 10% w/w. Then, suspensions were mixed thoroughly using a magnetic stirrer to obtain homogenous feed suspension. The dispersions were spray dried with a Labultima spray dryer to prepare co-processed excipients. The process parameters were set as follows; inlet temperature (120°); outlet temperature (50°); aspirator setting (20-30); pump setting (10-20 ml/min); air pressure 2 kg/cm2.

The static angle of repose was measured by the fixed funnel method. The bulk density of the mixed powders before compression was calculated by determining the Hausner’s ratio and Carr’s index from the poured and tapped bulk densities of a known weight of sample using a measuring cylinder and the following formula; Hausner’s ratio=Dp/ Dt, Carr’s index=[(Dp-Dt/Dp)×100], where Dp (poured density)=weight/poured volume, Dt (tapped density)=weight/Vt (tapped volume).

The composition of tablet is presented in Table 1. The composition was compressed into flat tablets with 8 mm diameter using a single punch tablet machine at a fixed compression force. The punches and die were lubricated with a small amount of magnesium stearate using a cotton swab preceding compression. The tablets were stored at 25° and 34% relative humidity for one week in a desiccator.

Fourier transform infrared (FTIR) spectral data were taken on a Shimadzu (model FTIR-8300) instrument to find out the chemical stability of excipients. FTIR spectra of pure drug tizanidine HCl, drug + Eudragit (E100), Spray dried excipient base and formulation F3. The samples were crushed with potassium bromide to get pellets at 1 ton/cm2. Spectral scanning was done in the range between 3000-600 cm−1.

Differential scanning calorimetry (DSC) was performed on pure drug tizanidine HCl, physical mixture of drug + microcrystalline cellulose + SSLhydroxypropylcellulose, spray dried excipient base and of formulation F-3. DSC measurements were done on a Shimadzu DSC-60. Samples were sealed in aluminum pans and heated at a constant rate of 10°/min over a temperature range of 10-350°. Inert atmosphere was maintained by purging nitrogen gas.

Tablets were evaluated for thickness, hardness, weight variation and friability. Thickness of the tablets was tested using calibrated vernier caliper. This test was done in triplicate and average was calculated. The hardness of formulation was measured by using Monsanto hardness tester. The hardness was measured in terms of kg/cm2. Weight variation is done by weighing 20 tablets individually; calculating the average weight and comparing the individual tablet weight to the average. Friability test is performed to assess the effect of friction and shocks, which may often cause tablet to chip or break. Roche friabilator was used as per USP procedure for friability testing.

Five tablets were randomly taken and triturated using a glass mortar and pestle. The blend equivalent to 4 mg of tizanidine HCl was weighed and dissolved in suitable quantity of phosphate buffer (pH 1.2) solution, was filtered, suitably diluted and drug content analyzed spectrophotometrically at 230 nm. The test was done in triplicate and the average drug content was estimated.

The In vitro drug release was determined using USP apparatus XXIII (Paddle assembly) at 50 rpm maintained at 37±5° in 900 ml of distilled water as dissolution media. Percent drug release was determined by taking an aliquot of 5 ml at different time intervals, filtered through whatman filter paper and was assayed spectrophotometricaly at 230 nm. An equal volume of fresh dissolution medium was replaced to maintain the original volume. The dissolution studies were carried in triplicate.

Solid dispersion of drug with eudragit E100 was prepared to mask the bitter taste of drug. Flow properties of the powder can be judged from the angle of repose. The angle of repose <30° indicates free flowing material and >40° with poor flow properties [13]. The value of angle of repose for spray dried excipient base was found in the range of 24.190±0.300 to 27.810±0.330 showing that the base was free flowing and can be used for direct compression method; lower angle of repose indicates good flow property which is due to increased sphericity of spray dried excipient base which was further supported by scanning electron micrographs as shown in figs. 1a and b. The prepared tablets were evaluated for physical parameters such as thickness, hardness, weight variation and friability; the results are tabulated in Table 2. Percent weight variation was observed between 2.50±0.56 to 3.2±0.43; well within the acceptable limit for uncoated tablet as per USP. Since mechanical integrity is of paramount importance in successful formulation of orodispersible tablets, the hardness determined was found to be in the range of 3-4 kg/cm2. Friability was observed between 0.62±0.29 to 0.71±0.22% which was below 1% indicating sufficient mechanical integrity and strength of the prepared tablets. Results of wetting time and water absorption ratio determined are tabulated in Table 2. Wetting time is closely related to the inner structure of the tablets and the hydrophilicity of the excipients. It was observed that the wetting time decreases with the increase in the amount of hydroxypropylcellulose. Disintegration time is of much importance in formulation of orodispersible tablets which was found to be in the range of 9.15±0.04 to 15.33±0.01 s for formulated tablets; it was also observed that the tablets with the least wetting time showed minimum disintegration time. It shows a strong correlation between wetting time and disintegration time. In vitro drug dissolution studies showed maximum drug release of 93.75% for formulation F-3 at the end of 15 min. The spectral analysis reveals no significant shift in characteristic absorption bands cm-1 at 3300 (NH), 1540 (C=N), and 750 (Ar-Cl) of drug during co-processing and in formulation confirming compatibility and stability of drug as shown in fig. 2. Thermograms as shown in fig. 3 revealed that the pure drug has a sharp endotherm at 291.81°. However the drug and its formulation showed characteristic change in the appearance of the thermogram. It is observed that in formulation F-3 the nature of the thermogram is totally changed and the sharp peaks are shifted to a lower range 251° and the peaks of the pure drug have changed to broad peaks with reduction of the height of peak. These changes indicate that change in the particle size gave a more amorphous type of product, which attributes to improved drug release from formulations. With the absence of a chemical change during processing, co-processed excipients can be considered generally regarded as safe (GRAS) if the parent excipients are also GRAS certified by the regulatory agencies [14]. Data analyses of kinetic studies performed for formulations has been depicted in fig. 4. The results were found to be linear for first order release. It can be concluded from the present work that taste masking of tizanidine HCl was achieved by preparation of solid dispersion using Eudragit E100 as a carrier. Formulation of orodispersible tablets of tizanidine HCl with good mechanical integrity and fast disintegration was successfully achieved using spray dried excipient base of microcrystalline cellulose with SSL-hydroxypropylcellulose. 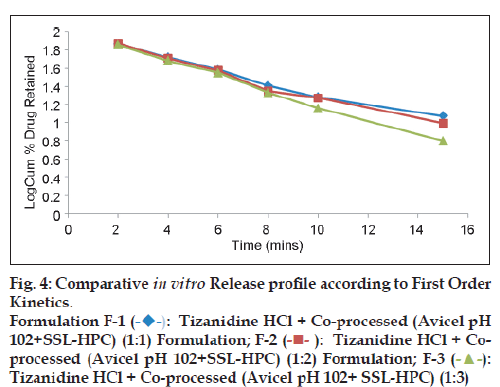 The authors are thankful to KLEU’S College of Pharmacy, Belgaum for providing the facilities to carry out the work and generous support from JPN Pharma Pvt. Ltd., Mumbai, Arihant Trading Co., Mumbai, Reliance Cellulose Product, Hyderabad.