Development of RP-HPLC for analysis of human insulin

The objective of the present work is to develop a simple and sensitive method for analysis of human insulin injection by using reverse-phase high performance liquid chromatography technique. A reverse-phase high performance liquid chromatography method with UV-detection at room temperature has been developed for the analysis of insulin from formulation. Hypersil BDS C-18 was used as stationary phase, and mobile phase consisted of 60 volume of 1 mmol sodium sulphate and 0.2% triethylamine in water, pH 3.2 adjusted by phosphoric acid, and 40 volume of acetonitrile. The eluent was monitored with a UV detector set at 214 nm with a flow rate of 1 ml/min, and sample size of 20 µl were carried out at room temperature all over the study. The method produced linear response over the concentration range of 10-100 µg/ml, with a mean recovery of 97 ± 0.31% as well as average intra- and inter-day variations of 1.35 and 5.13% respectively. The limits of detection and quantitation of the method were 0.25 and 0.75 µg/ml respectively. Considering the analysis specifications, the system is suitable for direct analysis of routine formulations and stability studies.

Insulin is the most important regulatory hormone in the control of glucose homeostasis, consisting of 51 amino acids shared between two intramolecular chains and with a molecular weight of 5800. Insulin, like other proteins, is not a stable entity but is liable to modification by chemical reactions with molecules in its vicinity. Thus during storage and use of pharmaceutical preparation, insulin is degraded by hydrolytic reactions or is transformed by formation of intermolecular covalent bonds with other insulin molecules, leading to higher molecular weight transformation products [1].

The currently accepted method of determination of the concentration of insulin in a given preparation is based on biological assays. Now HPLC has been applied to determine the concentration of insulin in various preparations [2,3]. Although HPLC has been utilized in these studies, there have been several problems associated with the published assays. Retention time of 16 min and 20 min for the compound of interest may be considered excessive when it is necessary to analyze multiple samples. No single analytical method can detect all possible chemical, physical and immunological changes in the protein structure. Thus several analytical techniques such as electrophoresis, spectroscopy, chromatography, thermal analysis, immuno assays and bioassays may be required to completely characterize a protein and examine its degradation profiles [4]. Since 1978, several RP-HPLC systems for analysis of insulin have been described [2–12]. Most of these RP-HPLC determinations of insulin controlled the degree of ionization on insulin by using a mobile phase with low pH and high salinity.

An alternative approach to get good peak shape and reproducible retention time with better resolution is to use an ion-pairing reagent. However, some of these methods suffer to resolve adequately insulin from its desamidated form, because of inadequate selectivity or efficiency [5-8]. Some are time consuming and retention time of insulin- related peak is too long [3,9,10]. Using of a special column or column temperature controllers, which are not popular in most of the analytical laboratories, is another limitation [3,9]. In this study, a simple and sensitive method for analysis of human insulin injection has been developed by using RP- HPLC technique.

The HPLC apparatus consisted of a Jasco Model PU 980 HPLC pump, UV-975 tunable absorption detector and Clarity Lite software. RP-HPLC analysis was performed using a BDS Hypersil C-18 (average particle size 5 μm) column (150 mm, 4.6 mm). The mobile phase consisted of 60 volume of 1 mmol sodium sulphate and 0.2% triethylamine in water, pH adjusted to 3.2 by phosphoric acid, and 40 volume of acetonitrile. The solution was filtered through a 0.2 μm membrane. The eluent was monitored with a UV detector set at 214 nm with a flow rate of 1 ml/min, and sample size of 20 μl were carried out at room temperature all over the study.

Insulin solution was dissolved in 0.01 M HCI to obtain concentration of 10, 20, 40, 60, 80 and 100 μg/ml. Prepared samples were injected directly to HPLC column (n = 3). Standard curve was plotted using peak areas versus known concentrations of insulin. The resulting regression line data were used to determine the concentration of the samples. The injection formulation, containing 0.035 mg/ml human insulin, was diluted with 0.01M HCl to achieve an appropriate concentration. All of the concentrations (10-100 μg/ml) used for construction of standard curve were prepared as six replicates and analyzed in one day or six different days in order to evaluate intra-day or inter-day variations respectively. Then, the coefficients of variations (% CV) of responses were calculated in each case.

Twenty successive injections of 0.01 M HCl (blank) were carried out, and the average areas of noise peaks for each of the samples were determined. Then, the SD of the peak areas was calculated and multiplied by 3 and 10 to obtain limits of detection and quantitation respectively. To validate the estimated values, six samples of each of the calculated concentrations were prepared and analyed.

To evaluate the stability of samples during analysis time and also upon storage for a limited time, samples with concentrations of 10, 40 and 100 μg/ml of insulin were analyzed immediately after preparation as well as after 12, 24 and 72 h at room temperature. Then, the percent ratios of concentrations determined in each case to known added concentrations were calculated.

The method is based on separation of insulin from other excipients for quantifying the insulin in finished product. Several parameters such as composition of mobile phase, flow rate and detection wavelength were evaluated for their effect on location and shape of peak of the insulin while developing the method. Human insulin injections, like other multiple dose injection formulations, contain preservative(s). Many preservatives exhibit high ultraviolet absorption, making it necessary to have analytical techniques capable of separating the protein from the preservative. Ideally, it would be desirable to have quantitative separation methods capable of resolving the preservative(s) and degradation product with no interfering interaction with the analyte.

Considering the final optimized method, a mobile phase consisting of 60 vol of 1 mmol sodium sulphate and 0.2% triethylamine in water, pH 3.2 adjusted by phosphoric acid, and 40 vol of acetonitrile were used. The solution was filtered through a 0.2 μm membrane. The eluent was monitored with a UV detector at 214 nm with flow rate of 1 ml/min. The retention time for human insulin was 4.67 min, as shown in fig. 1. It should be noted that the retention time varied considerably unless the relative content of acetonitrile in the mobile phase was carefully kept constant, but slight change in the pH did not affect the retention time of insulin. Insulin injections, like other multiple dose injection formulations, contain preservative(s). In this method, the insulin injection was used and it was observed that no excipient was interfering with the analyte peak. 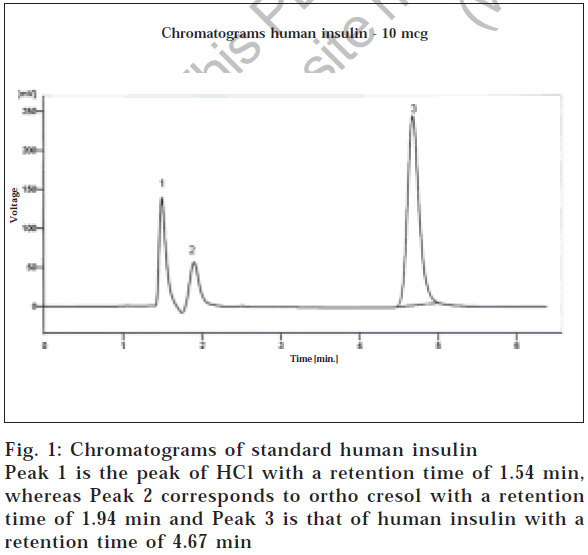 The peak area for human insulin varied linearly with the amount injected over the range 10-100 μg/ml (slope 1911.3, intercept -385.3, standard error of slope 374, standard error of intercept 294, correlation factor 0.9985). Since higher concentrations cause overlapping of insulin and preservative-related peaks, it is recommended to dilute the injection test samples to desired concentration. The mean absolute recovery values of the method were 97±0.31 and are shown in Table 1.

The results of the variation of the method were determined over a concentration range of 10-100 μg/ml. These data indicate a considerable degree of precision and reproducibility for the method, both between and within analytical runs. The limits of detection and quantitation of the method were 0.25 and 0.75 μg/ml respectively. The % CV values of the peak heights of six successive injections in each case were 7.58 and 5.69 resolution and reproducibility and non-dependency on requirements such as column temperature controller. The assay has been validated and documented. The assay has some benefits when compared to previously published HPLC assays6,8,12. Of primary importance, this respectively.

The stability of different insulin concentrations at room temperature was determined. About 10% decrease in concentration of samples after 24 h storage at room temperature was observed, but it was negligible after 12 h. Therefore, it is recommended to use freshly prepared samples. As the results show, the method is remarkably accurate and this ensures obtaining reliable results.

The advantages of this method are, analysis of human insulin from formulation, wide range of linearity with considerable accuracy and precision of analysis, greater resolution and reproducibility and non-dependency on requirements such as column temperature controller.

The assay has been validated and documented. The assay has some benefits when compared to previously published HPLC assays [6,8,12]. Of primary importance, this assay has relatively short insulin retention time and is based on an isocratic mobile phase. This assay procedure of insulin may suitably be used for quantification of any unknown concentration of insulin. Because of its specificity, good reproducibility, accuracy, inexpensiveness, relative rapidity and sufficient sensitiveness, the method may be successfully used in evaluation of formulations as well as bulk insulin.

The investigators would like to acknowledge the financial support by University Grants Commission, India, to carry out this project through their Grant no. F 7-17/2003 (SR).