Development of taste masked film of valdecoxib for oral use

Amongst the various routes of drug delivery, oral route is the most preferred by patients and clinicians. A renewed interest has been addressed to oral solid dosage forms designed for prompt availability of therapeutic dose. Mouth dissolve products (tablets and films) may show greater patient acceptability and convenience. They can be taken with ease at any time by the patient without water [1,2]. Oral film may be preferred over the mouth dissolve tablets in terms of flexibility and comfort [3]. In addition, they can also circumvent the sticky feeling in the oral cavity associated with oral gels. Moreover, the oral film is able to protect the wound surface, thus reduce pain and also could treat oral disease more effectively [4].

Valdecoxib is a non-steroidal antiinflammatory drug that also exhibits analgesic and antipyretic activity by inhibiting cyclooxygenase-2 isozyme [5, 6]. Drugs can be absorbed through oral mucosa into the systemic circulation [7,8]. One of the major issues in use of oral films is taste masking for the bitter drugs. Valdecoxib has bitter taste and hence taste masking would be the primary requirement for the development of oral film of valdecoxib. Most of the current orally used film making polymers are gums, chitosan, polyacrylic and cellulose derivatives [8-10]. Depending on the type of polymer used, films of different solubility characteristic can be produced. Eudragit EPO is used as a film former and is soluble in the acidic pH. Hydroxypropylmethylcellulose (HPMC) is a gelling, matrixing and film forming polymer. Depending on the molecular weight of HPMC the desired release of drug can be achieved. The main goal of the present investigation was to develop films consisting of Eudragit EPO, HPMC and valdecoxib.

Valdecoxib was received as a gift sample from Aarti Drugs Ltd., Tarapur, Gujarat. Eudragit EPO and Hydroxypropyl methyl cellulose (HPMC 5 cps) were gifted by Rohm Pharma, Germany and Signet, Mumbai. Menthol and aspartame were obtained from Dewang Co., Ahmedabad and Acme Labs., Changodar, respectively. Glycerol and polyethylene glycol 400 (PEG 400) were purchased from Laser industry, Ahmedabad. Ethanol was purchased from Baroda Chemicals, Dabhoi. All the other chemicals and solvents were of analytical grade.

The Eudragit films were prepared by solvent casting method using 5, 10 and 15% w/v of Eudragit EPO in 10 milliliters of dichloromethane (DCM) or 0.1 N HCl as two different solvents. Glycerol and PEG 400 were evaluated as plasticizers in the ratio of 1:0.2 of dry polymer to dry plasticizer. The solutions were cast on plastic Petri dishes (9.8 cm diameter, 8 mm height). The films were dried in an oven at 450 for 24 h. After drying, the films were separated from the surface of petridish and stored in air tight plastic bags.

Aqueous HPMC solutions (1, 2 and 3% w/v) were used to prepare the HPMC film in the plastic petridish. Ten milliliters of the clear aqueous solution was used for casting films. The films were dried at 450 for 48 h. The dried films were stored in airtight plastic bags till further use.

Eudragit EPO and glycerol were dissolved in 10 ml 0.1 N HCl. To this solution, HPMC was added by sprinkling the powder in the agitated solution. Ten milliliters of clear homogenous solution was poured in the plastic petridish and the films were dried for 48 h at 450 in a hot air oven. The drug loaded films were prepared from the optimized batch by incorporating 190 mg of valdecoxib to achieve the dose of 10 mg per 4 cm2 film. Tables 1 and 2 display the composition of various films. The films containing both the film formers were stored in air tight plastic bags till further use.

Hydration study was conducted as described by Wong et al [11]. The hydration ratio of the batches V1 to V4 was determined gravimetrically. The film sample (1 cm2) was weighed and placed on a preweighed stainless steel wire mesh with average sieve opening of 200 μm. The screen was then submerged in a petridish containing 20 ml distilled water. Increase in weight of the film was determined at regular time intervals until a constant weight was obtained. The hydration ratio of the film was calculated according to the following equation: hydration ratio= (wt-wo)/wo, where, wt is the weight of the film at time t and wo is the weight of the film at zero time. The results of hydration study are shown in fig. 1. The folding endurance study was conducted as described by Raghuraman et al [12]. The film of the optimized batches (4 cm2) was taken and was firmly folded through the middle. The number of folds, on the same crease, required to produce crack in the film was taken as a measure of plasticity. 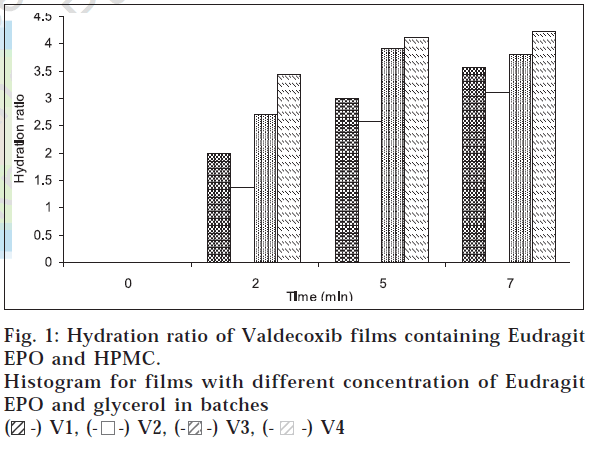 Films containing 10 mg valdecoxib were used in the in vitro dissolution study. Dissolution study was conducted in modified USP XXIII apparatus (paddle over disk) at 100 rpm, using 1000 milliliters distilled water as a dissolution media. The temperature was maintained at 37±0.50. Five milliliters samples were withdrawn at the regular intervals and analyzed by Hitachi U2000 double beam UV/Vis spectrophotometer at 245 nm. An equal amount of fresh dissolution media was replaced immediately after withdrawal of the sample. The results are shown in fig. 2. Preliminary studies were carried out to select suitable solvent and plasticizer. Eudragit EPO films were prepared either using dichloromethane (DCM) or 0.1 N HCl as a solvent. Plasticizers were added to improve the softness of the film and to assist easy detachment of the film from surface of the plastic petridish. Eudragit films formed using DCM as the solvent, could not be separated from the surface of petridish. Films of uniform thickness, good elasticity and clarity were obtained when 0.1 N HCl was used as a solvent. Eudragit EPO solution (10%w/v) containing glycerol as plasticizer yielded superior film. Eudragit films prepared using PEG 400 as a plasticizer was too soft and difficult to separate from the petridish. HPMC films of moderate to low elasticity were formed with 2% and 3% w/v solution. These films were easily detachable and seldom needed any additional plasticizer, though the elasticity was poor (folding endurance= 9). Water is as a plasticizer and solvent for HPMC. 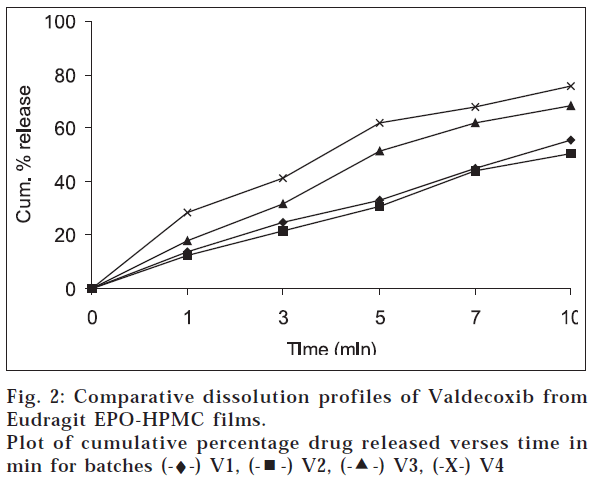 The combination film of Eudragit EPO and HPMC were prepared (batches EH1 to EH5) to get desired film properties like ease in film separation and faster drug release. The film of batch EH1 was yellowish white in color and hazy in appearance. The amount of Eudragit EPO was reduced to promote clarity and flexibility. The result shown in Table 1 reveals that the film of batch EH3 exhibited better clarity and elasticity. The film of Batch EH3 was selected for further study considering clarity and elasticity.

The quantities shown above are in mg.

Five batches (V1 - V5) of drug containing films were prepared. Valdecoxib was added to Eudragit EPO solution in 0.1 N HCl. A part of the acid was neutralized due to basic nature of valdecoxib. The films prepared using 0.1 N HCl exhibited almost neutral pH. As valdecoxib is present in salt form in the film its solubility was appreciably increased thereby promoting the faster release of the drug from the oral film. Taste masking of the bitter drug like valdecoxib was of foremost priority in designing oral formulations. Eudragit EPO had been used to mask the taste of a bitter drug [13]. Batch V2 (Table 2) was prepared to study the effect of increased amount of Eudragit EPO and glycerol on taste masking. However, there was no appreciable improvement in the taste masking. Addition of flavors and sweeteners is the simplest approach for taste masking. Menthol when used as a flavoring agent not only suppresses the bitter taste but also provides anticaries and mild anaesthetic effect. However, when used in lower level (1.9 mg), synergistic combination of aspartame and menthol were not effective in suppressing the bitter taste. Therefore, higher concentration of aspartame and menthol were used in succeeding batches along with the increase in concentration of glycerol to aid in suppressing the bitterness and to act as a plasticizer. Batches V3 and V4 showed improvement in taste masking.

The quantities shown above are in mg.

From the comparative dissolution profile of batches V1 and V2 as shown in fig. 2, it can be observed that as the concentration of Eudragit EPO was increased, there was insignificant retardation in the drug release. Progressive increase in the drug release was observed in batch V3 and V4. Therefore, it is concluded that glycerol not only contributed to sweetness but also acted as a solubility enhancer. This was due to increased water uptake of the film as a result of increase in concentration of glycerol as depicted in fig. 1. About 75% of valdecoxib was released in 10 min and films of batch V4 masked the bitter taste of the drug. This batch showed hydration ratio of 4.1 indicating the rapid water uptake and hence faster drug release. Good elasticity can be assured from the folding endurance. It can be concluded that Eudragit EPO and HPMC can be used in concert to develop rapid dissolve taste masked film of valdecoxib. The film characteristics can be manipulated by making changes in the formulation. The film can be taken as such by patients or can be put into capsules. Further studies are required in selecting appropriate package for marketing.