P. B. Shah* and K. Pundarikakshudu1

We report here, two simple and reproducible methods, viz., (1) difference spectroscopic and (2) reverse phase HPLC methods for the analysis of cefdinir from pharmaceutical dosage forms. The methods were validated by employing suitable statistical methods. In difference spectroscopic method, the absorbance is measured at maxima 265 nm and minima at 230 nm. The measured value is the amplitude of maxima and minima between two eqimolar solutions of the analyte in different chemical forms, which exhibit different spectral characteristics. The method is advantageous over others, as it achieves the spectrophotometric isolation of the drug; moreover, interference due to additives can be nullified as can be proved by no change in isobestic points [6]. The second method, a high performance liquid chromatography (HPLC), was developed, using 50 mM ammonium acetate (pH 3.0±0.1 adjusted with 10% phosphoric acid) and methanol (80:20% v/v) as the mobile phase with flow rate of 1 ml/min and measuring the response at 285 nm.

All the reagents used were of analytical grade. A stock solution of cefdinir (1 mg/ml) was prepared by dissolving 100 mg of the drug in 100 ml 0.1 M phosphate buffer (pH 7.0). Spectral and absorbance measurement were made on Shimadzu-1601 UV/Vis Spectrophotometer by using 1 cm matched quartz cells.

Aliquots of cefdinir stock solution (1 mg/ml) of the drug ranging from 0.1 to 0.35 ml were transferred to two sets of a series of 10 ml volumetric flask. One set of cefdinir solutions was diluted with 0.5N HCl to volume, and second set of cefdinir solutions was diluted with buffer to volume. Difference spectrum was recorded by placing same concentration of acidic and buffer solution in sample and reference cell respectively. The amplitude was plotted versus concentration (10-35 μg/ml), calibration curve was constructed, and the regression equation was calculated (Table 1).

aAbsorption maxima, bAbsorption minima, Y=a+bX, where “X” is concentration in mg/ml and Y is absorbance units.

Not less than 20 capsules were weighed and emptied. A quantity of powder equivalent to 10 mg of cefdinir was than extracted with 10 ml buffer. The solution was prepared and analyzed as described above. The amount of cefdinir present in the sample solution was computed from the calibration curve (Table 2).

The difference spectroscopic method is based on the nullification of UV absorbance at the wavelength corresponding to the point of intersection of drug spectra in acidic and basic media [7]. The technique of difference spectroscopy is as convenient and precise as conventional spectroscopy but offers the advantage of increased specificity. The methodology requires that a drug exists in two forms that differ in their absorption spectra, which have been obtained using temperature difference, pH difference, solvent perturbation and concentration, but mainly generated by pH effects. The pH chosen must quantitatively form single species with at least 99% spectral purity. 0.5N HCl and phosphate buffer (pH 7.0) were chosen to generate pH difference. The peak maxima were obtained at 265 nm and minima at 230 nm (Fig. 1). The amplitude, which is the sum of magnitude of absorbance at the above two wavelengths, was selected for the measurement. The isobestic points (points representing zero absorbance corresponding to cutting points of acidic and alkaline spectra) were recorded at 244 nm and 287 nm, which were identical irrespective of the pH of solution in reference cell. There is no change in isobestic points, which reveals that there is no interference by additives. 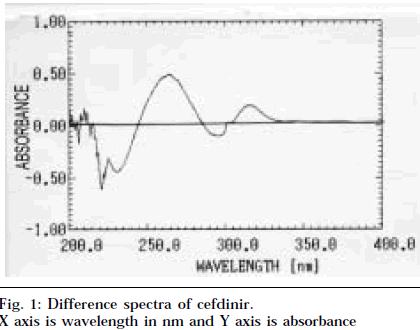 Fig. 1: Difference spectra of cefdinir. X axis is wavelength in nm and Y axis is absorbance 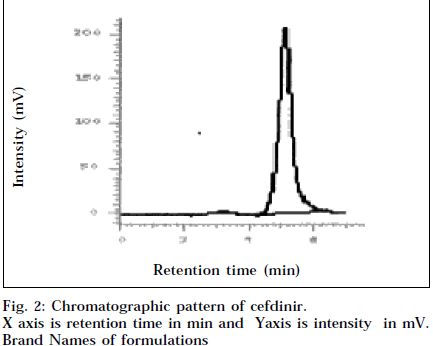 Fig. 2: Chromatographic pattern of cefdinir. X axis is retention time in min and Yaxis is intensity in mV. Brand Names of formulations

To evaluate the recovery of the methods, known amounts of pure drug were added to the previously analyzed pharmaceutical preparations and the mixtures were analyzed by the proposed methods. The percentage recoveries thus obtained are given in Table 2. Interference studies revealed that the common excipients and other additives usually present in dosage forms did not contribute in the proposed methods. The proposed methods are simple, sensitive, precise, reproducible and accurate and hence can be used for the routine determination of cefdinir in bulk as well as in pharmaceutical preparations as alternative to the existing methods.

The authors are thankful to Torrent Research Center, Bhatt, Ahmedabad, for providing a gift sample of cefdinir.