Valdecoxib (VAL) is a new nonsteroidal antiinflammatory drug (NSAID) [1]. It is a selective inhibitor of the cyclooxygenase-2 (COX-2) and exhibits many of the pharmacological actions of prototypical NSAIDs, including antiinflammatory, analgesic and antipyretic activity [2]. It is not official in any pharmacopoeia. The testing of pharmaceutical dosage forms for in vitro drug release and dissolution characteristics is very important for ensuring batch-to-batch quality control and to optimize formulations during drug development. Drugs that are practically insoluble (less than 0.01%) need special attention during dissolution testing for proper in vitro-in vivo correlation. Since the dissolution may be a rate limiting step in the in vivo absorption process, there is a need for developing an appropriate dissolution medium [3].

Approaches usually used in the design of dissolution media for poorly water-soluble drugs include increasing the volume of the aqueous sink or removing the dissolved drug, solubilization of the drug by co-solvents (up to 40%), or by anionic or non-ionic surfactants (in post-micellar concentrations) or alteration of pH to enhance the solubility of insoluble drug molecules [4,5]. The last two approaches seem less cumbersome and have been more widely employed in pharmacopoeial dissolution tests [6].

In the present investigation, aqueous solubility of VAL in media containing co-solvents or surfactants was assessed to prepare a dissolution system which satisfies sink conditions for testing VAL formulations. The discriminating power of the selected dissolution medium was evaluated using prepared and commercial formulations.

The apparent solubility of VAL in water or in presence of co-solvent or surfactant in water was determined at 37°. VAL (50 mg) was added to 50 ml of water in a conical flask with Teflon-lined screw caps. The conical flasks were kept in a shaker incubator maintained at 37±0.5° for 24 h. After shaking, the flasks were kept in an incubator at 37±0.5° for equilibration for 12 h. Then the solution was filtered through 0.45 μ membrane filter, and the filtrate was assayed spectrophotometrically at 239 nm against two respective blank solutions.

A batch of 20 tablets of VAL was procured for comparative studies of two different brands, Valus and Revaldo-20. The dissolution experiments for commercial formulations of VAL were performed using above in vitro dissolution conditions by selecting 0.6% w/v SLS in water as dissolution medium.

In this study, solubility data was used as a basis for the development of a dissolution medium for VAL. Since VAL is poorly soluble in water, solubility determination was carried out using 0.6, 0.8, 1.0, 1.5 and 2.0% w/v of SLS in water; phosphate buffer pH 7.4, 0.5 and 1.0% v/v Tween in water; 5 and 10% methanol in water. The apparent solubility of VAL in different mediums is given in the Table 1.

Apparent solubility of VAL (valdecoxib) in various dissolution medium at 37° is given, and the concentration is expressed as micrograms per millilitres.

The comparative study of the dissolution rate of pure drug in water and in different ratios of SLS (0.25, 0.5, 1, 1.5, 2% w/v) containing water was carried out to justify the inclusion of SLS in fig.1. The results indicated that dissolution rate of VAL increased with increase in SLS concentration of dissolution medium, and maximum dissolution was found in water containing 2% w/v SLS. Addition of surfactant to the dissolution medium improves the dissolution of pure drug by facilitating the drug release process at the solid / liquid interface and micelle solubilization in the bulk7. However, 0.6% w/v SLS will be sufficient as dissolution medium which has discriminating power when compared to lower concentrations. The solubility of a drug can be enhanced by ensuring that the surfactant concentration is at least above the critical micelle concentration (CMC). The CMC will depend upon the surfactant itself and the ionic strength of the media. The amount of surfactant needed depends on the CMC and the degree to which the compound partitions into the surface micelles [8] . It may be the reason for the fact that increase in concentration of SLS above 2.0% SLS did not exhibit any increase in the amount of VAL dissolved. The apparent solubility of SLS was found to be higher when compared to Tween 80. It may be due to the ionization effect of SLS, a cationic surfactant [9]. 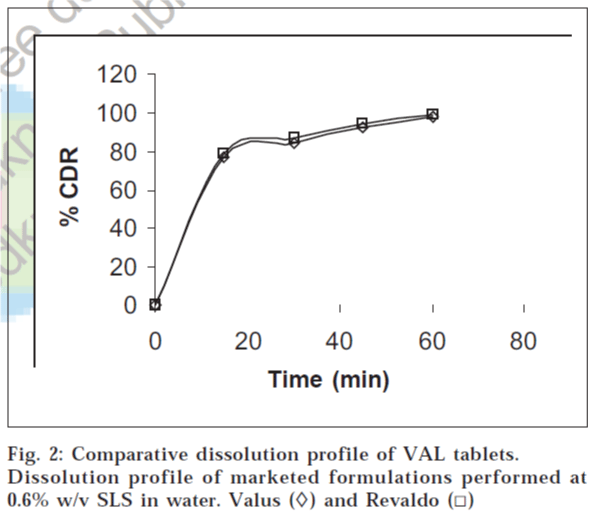