Antibiotics such as ampicillin, gentamicin, cefotaxime, and vancomycin are listed among top 10 medications that are commonly used in neonatal intensive care units (NICUs)[1]. In suspected early onset neonatal sepsis (EONS), ampicillin together with gentamicin or cefotaxime is used empirically, as per recommendations by American Academy of Pediatrics (AAP) and South Australian Perinatal guidelines[2,3]. One study conducted at a university hospital in Malaysia has reported that 84.3 % of new-borns at the NICU are prescribed with crystalline penicillin (C-penicillin) and gentamicin as a first-line therapy[4]. It is in concordance with the Malaysian guidelines, where C-penicillin and gentamicin combination is recommended in suspected EONS[5,6].

New-borns exposed to maternal risk factors or those who develop early clinical manifestations are commonly prescribed with empiric antibiotics in the NICU[2,7]. The World Health Organisation (WHO) has prepared a guideline on possible risks and clinical manifestations that require an early antibiotic coverage to reduce risks of mortality and morbidity related to neonatal sepsis, as well as has emphasized on the importance of starting empiric antibiotics[8]. It should be started as early as possible because a delay in neonatal sepsis treatment can increase the risk of new-born mortality, especially if caused by Gram-negative organisms[9,10].

It is a big challenge for paediatricians to prescribe empiric antibiotics, especially in certain difficult scenarios where organisms rarely grow in the blood culture possibly due to single sampling and small blood volume[1,11,12]. Hence, the treatment duration of an empiric antibiotic remains controversial[2]. Most of established guidelines have recommended reviewing empiric antibiotic treatment outcomes after 36 h of exposure and a substantial amount of evidence has reported that shorter treatment duration in suspected EONS does not interfere with desirable outcomes[13,14].

Early empiric antibiotic de-escalation is not common in neonatal sepsis; however, it can possibly be done in critically ill patients[15]. Gentamicin is usually used as a synergistic to penicillin, and it also eradicates Gram-negative organisms[16]. The WHO guideline has suggested at least 2 doses of intramuscular gentamicin and 2 d of intravenous ampicillin as antibiotic prophylaxis in new-borns with risks of sepsis[8]. Therapeutic outcomes need to be monitored if more than 2 doses of gentamicin are given[17]. A previous study conducted at the Malaysian government hospitals has shown that the most common microorganism isolated from EONS patients is Gram-positive with a good sensitivity against first-line antibiotics[11]. Hence, withdrawal of gentamicin after the second dose can be done particularly in patients where probabilities of sepsis are low and new-borns waiting for laboratory confirmation remain well during 72 h of life. It may potentially be implemented as an early de-escalation strategy in suspected EONS patients to minimize unnecessary antibiotic exposure and hazards of blood collection. This investigation is aimed to describe the empiric antibiotic de-escalation practice in suspected EONS patients admitted to the NICU and evaluate its outcome within 7 d of birth.

This study was a prospective observational study conducted at the NICU of a tertiary hospital in Malaysia. The NICU has 44 beds, managed by a neonatologist. It also has full-time clinical pharmacists who actively participate in the management of medical therapies including antibiotics for all patients. No intervention or interruption to management activities was done by the researcher during the study period.

Patients were eligible to be included if they were admitted to the NICU with the diagnosis of suspected EONS and started on empiric antibiotics within 72 h of birth. Patients who received empiric antibiotic treatments after 72 h of birth were excluded. No active intervention was done during study period. Ethical approval was obtained from the Medical Research and Ethics Committee of the Ministry of Health Malaysia (NMRR-17-1882-36914 (IIR)).

Records of all patients admitted to the NICU specialist hospital within 72 h of life, in a period between September 1, 2017 and December 31, 2017, were prospectively screened. The data of eligible patients were collected from patients’ electronic medical records and manual prescriptions. The data included patients’ demographic profiles, risk factors, clinical manifestations, prescribed antibiotics, types of organisms, de-escalation practices, and treatment outcomes up to 7 d of birth. Microbiological analyses included blood cultures prior to the commencement of empiric antibiotics.

The data analysis was carried out using IBM® SPSS® for Windows version 23. Frequencies and percentages of each continuous variable were calculated and presented in table formats. For practice-related differences, categorical variables were assessed using Pearson Chi-Square test (χ2 test) or Fisher’s exact test and continuous variables were assessed using Mann Whitney U test where the median were compared between the groups. For all statistical analyses, the significance was set at 0.05.

A total of 529 new-borns were admitted to the NICU within 72 h of birth, over a period of 4 mo. All patients were screened for inclusion and exclusion criteria and 278 (52.5 %) patients were eligible to be included in the study. Two patients were transferred to another hospital for further surgical management; thus, 276 patients were enrolled for further practice-related analyses (fig. 1). 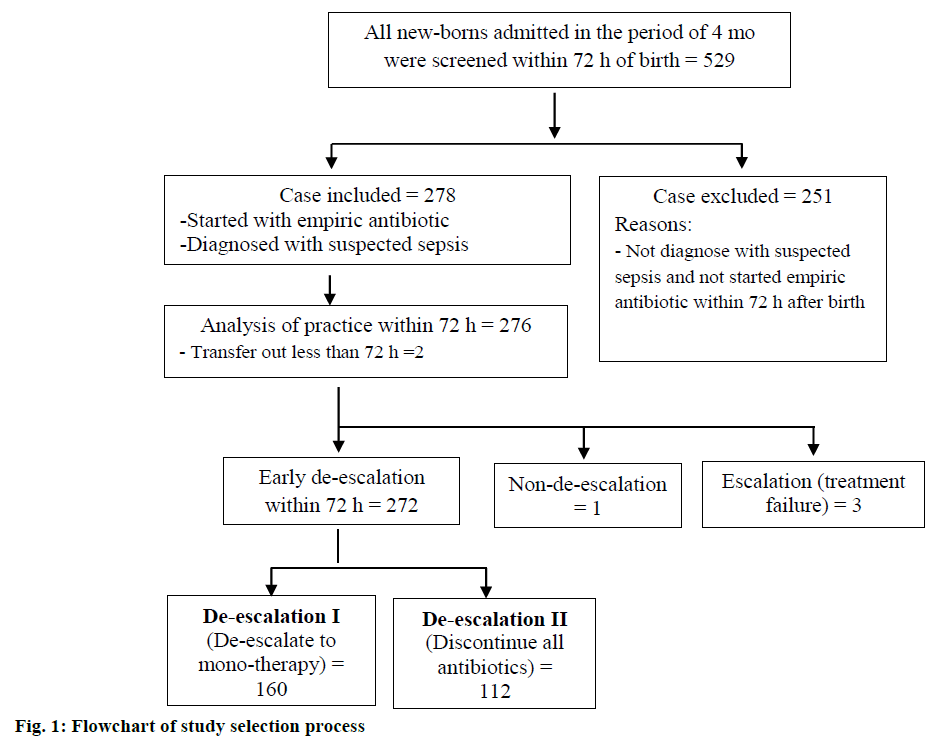 The mean gestational age was 34.9±3.734 w and birth weight was 2.34±0.873 kg. Table 1 describes demographics and risk factors of the 2 groups. Both groups had no significant difference in terms of maternal characteristics, maternal risk factors, and neonatal characteristics (p>0.05). The only significant difference between the groups was higher Apgar score ≤3 at 1 min of life in the de-escalation group I. A total of 125 (46 %) patients were admitted up to 7 d of birth to NICU and the rest stay longer than a week (Table 1). Out of 125 patients, 118 (94 %) were discharged from NICU, 1 (0.8 %) transferred to other facility and 6 (4.8 %) patients died within 7 d of birth.

Clinical manifestations observed in suspected EONS are listed in Table 3. For early clinical manifestations, there was no significant difference between the 2 groups (p>0.05). Respiratory symptoms showed highest clinical manifestation nearly 60 % in both groups and mostly included recession (42 %), followed by nasal flaring (29 %), tachypnea (24 %), grunting (21 %), and cyanosis (6 %). Besides respiratory symptoms, more than 30 % of new-borns were presented with acidosis confirmed by blood pH. Gastrointestinal symptoms were present in less than 10 % of patients; in addition, less than 5 % of patients were presented with thermoregulatory, cardiac, or hypotension symptoms.

Table 4 shows information on pathogens that were isolated from blood cultures prepared prior to the empiric antibiotic administration. A total of 6 organisms were isolated from the de-escalation group I. Five pathogens were Gram-positive, and one was Gram-negative. GBS was isolated from a case of confirmed sepsis. Other isolated pathogens were labelled as contaminant sample in the pathology report. The antibiotic sensitivity was tested only for Sphingomonas (pseudo.) paucimobilis, which was reported to have sensitivity toward gentamicin. Repeated blood culture was done right after notification of positive preliminary result of first blood culture. All repeated blood cultures were no growth and none of the patients were under the treatment failure category.

In this study, treatment failure was observed in 6 patients (2.2 %), which included 3 escalation patients and 4 mortality patients, including the one from escalation patients, who died within 7 d of birth due to sepsis. Three other mortality patients with additional prematurity-related complications were from the deescalation group I. The difference in the number of second infection within 7 d of birth was not significant between the 2 groups, and it occurred between d 5 to d 6 of birth (Table 5).

In more than half of new-born admissions, empiric antibiotics were started within 24 to 72 h of birth. In this study, the majority were boys, premature with low birth weight, which are common characteristics of suspected EONS, as reported in previous studies[2,18,23]. PROM (>18 h), positive culture of maternal high vaginal swab (HVS), and MSAF were the main risk factors found in this study; in addition, respiratory symptoms showed highest clinical manifestation in both the groups. All these findings are similar to previous studies[18,23].

According to AAP and National Institute for Health and Care Excellence (NICE) guidelines, PROM (>18 h) and positive culture of maternal HVS were considered as risk factors that require empiric antibiotic treatments[2,17]. MSAF was not considered as a criterion to start empiric antibiotics. It usually occurs in 13 % of patients, which is similar to our finding; in addition, at least 5 % of these patients are presented with meconium aspiration syndrome (MAS)[24,25]. Empiric antibiotics in MAS are questionable according to a randomised control trial from India, which has not found any difference in the incidence of infection between new-borns with MAS who are with or without empiric antibiotic treatments[26].

In general, neonatal sepsis is a leading cause of mortality and morbidity, especially in EONS, and the presumptive antibiotic use is very important and needs to be started without delay[27]. Although early initiation of empiric antibiotic could potentially save lives, there are limited data on the antibiotic treatment duration[28]. This is a big concern as it can lead to antibiotic resistance and increase treatment costs[29].

Existing guidelines have suggested reviewing the outcome of empiric antibiotics between 36 and 48 h after the treatment[2,17]. However, prolonged use of empiric antibiotics in EONS is still an issue because of the lack of sensitive and specific diagnostic tests for detecting sepsis[30] and lower amount of positive blood cultures in new-borns[11]. Early empiric antibiotic de-escalation can be one of the options to reduce unnecessary antibiotic use[21], especially in asymptomatic and clinically well new-borns[2].

From the global perspective, GBS is the most common organism causing EONS[31]. The Centres for Disease Control and Prevention guidelines have recommended using IAP as a preventive measure, which has reduced the number of proven GBS patients markedly[31]. In developing countries, widespread use of IAP has caused changing of causative organisms from predominant Gram-positive to Gram-negative[32,33]. A recent Malaysian study has shown that nearly 80 % of patients are exposed to Gram-positive organisms, despite the IAP exposure[11]. Our study showed that 19-20 % of patients were exposed to IAP and only 14-16 % completed IAP>4 h prior delivery, which may give less impact on changing the causative organism.

There were 2 types of de-escalation practices identified in this study; withdrawal of gentamicin after the second dose and continuation of C-penicillin as a monotherapy and withdrawal of all antibiotics[21,22] within 72 h of treatment. Early empiric antibiotic de-escalation was common in this centre with a de-escalation rate of 98.5 %. The rate is reported to be lower in a retrospective study conducted in Ohio, USA, where only 40 % of early de-escalation was practiced in new-borns with negative blood cultures[12].

Early withdrawal of gentamicin may be an ideal approach in situations where Gram-positive organisms are the predominant one to cause EONS[11] in clinically well neonates waiting for the laboratory confirmation. This approach is also recommended in a guideline by the French National Agency for Accreditation and Evaluation in Health on neonatal sepsis[14]. In this guideline, 2 doses of aminoglycoside are recommended in clinically well new-borns except for those with meningitis and Gram-negative bacillipositive cultures[14].

Another study conducted in Ohio, USA, has compared between the antibiotic duration of ≤3 d and ≥7 d, wherein neonates with negative blood cultures in the ≤3 d group are discontinued with the antibiotic[13]. They have concluded that the clinical outcome is not compromised, and the survival rate remains the same even with shorter treatment duration[13]. However, no evidence was found on the impact of gentamicin withdrawal after the second dose in our study.

Authors would like to thank the Director-General of Health, Malaysia, for the permission to publish this paper. Authors are grateful to the Head of Paediatric Department, Sungai Buloh Hospital, for the support towards this research project. Authors wish to thank the Pharmacy Department and the Neonatal Intensive Care Unit of Sungai Buloh Hospital for technical support.