Effect of buspirone on blood sugar levels in humans

Psychiatric disorders such as depression, schizophrenia and anxiety disorders are seen more common in diabetic patients. The present study investigated the effect of an antianxiety drug, buspirone on blood glucose and plasma insulin level in healthy humans. Twelve healthy adult male volunteers were administered single oral doses of buspirone (10 mg) or placebo, in a randomized, crossover way, followed by oral glucose challenge (75 g in 200 ml) at reported T max of the respective administered drugs. The blood samples were collected as predose, postdose and post oral glucose load at 0.5, 1.0, 1.5, 2.0, 2.5 and 3.0 h. Blood glucose and plasma insulin concentrations were estimated by glucose hexokinase and enzyme linked immunosorbent assay methods respectively. The concentration of blood glucose was significantly ( p <0.05) decreased after oral glucose challenge following administration of buspirone in comparison with placebo. However no significant change was observed in the fasting blood glucose and fasting and oral glucose challenge induced plasma insulin. These results suggest that buspirone may have important risks particularly for diabetics, glucose intolerant and nondiabetics who are on long therapy with buspirone.

Anxiety disorders and diabetes mellitus are one of the common psychiatric and endocrine disorders prevalent in general population, respectively [1,2]. The incidence and prevalence of anxiety disorders are very common in diabetic patients than in the general population [3,4]. In diabetic patients, recognition and control of psychiatry and anxiety symptoms are of utmost importance to increase compliance with treatment and to improve quality of life. Newer antianxiety agents of azaspirodecanedione derivatives such as buspirone, gepirone and ipsapirone are considered superior and more preferable over benzodiazepines in patients [5]. Buspirone lacks hypnotic, anticonvulsant, and muscle relaxant activity so termed ‘anxioselective’. The main concern about drug therapy for disorders other than diabetes is that several non-diabetic drugs may also interfere with plasma glucose and insulin level in healthy as well as diabetics [6]. Pharmacologically, buspirone possess its anxiolytic property because of its action as a potent partial agonist of 5- hydroxytryptamine 1A (5-HT1A) receptor [7]. Drugs acting through biogenic amines such as serotonin and serotonin receptor modulators viz. serotonin receptor agonists, antagonists and selective serotonin reuptake inhibitors have been demonstrated to alter the blood glucose and plasma insulin level in few experimental and clinical studies [8-15]. Hence, alteration in blood glucose level in healthy humans, glucose intolerant and diabetic patients may impact the status of disease by causing hypoglycemia or alter the response of diabetic patients to their existing therapeutic regimen [6]. Apart from insulin and oral hypoglycemic drugs, the most common drugs, which cause hypoglycemia, are ethanol, β-adrenergic receptor antagonists and salicylates [5,6,14]. The dysregulation of control of blood glucose level has utmost importance in diabetics as well as non-diabetic. Regarding the effect of buspirone on blood glucose and plasma insulin, buspirone in rats reported to produce hyperglycemia without significantly affecting insulin level [16,17]. However, in another study it did not produce any change in blood glucose levels of rabbits [18]. Despite its wide use and conflicting reports regarding its effect no study is available in literature and product information sheet. In view of the same, the present study was conducted to determine the effect of buspirone on blood glucose and plasma insulin level in healthy human male volunteers.

The study protocol and Informed Consent Form (ICF) was approved by Institutional Review Board. The study was conducted at Ranbaxy Clinical Pharmacology Unit (RCPU), Majeedia Hospital, New Delhi. This research was carried out in accordance with the clinical research guidelines defined in the declaration of Helsinki [19]. Written consent was obtained from each subject prior to start of study. The subjects were deemed healthy according to medical history, physical examination, routine laboratory and clinical investigations.

Twelve healthy adult male human volunteers (age 24.8±2.8 y; range 20 to 30 y, body weight 64.25±6.42 kg; range 58 to 72 kg, height 168.75±6.64; range 160 to 181 cm) participated in the study. All volunteers were admitted in evening to keep an overnight fast of 12 h for oral glucose challenge test. Each volunteer was randomized to either receive a single 10 mg oral dose of buspirone (Buspin®, Intas Pharmaceuticals, Ahmedabad) or identical placebo (lactose tablets, 10 mg) at 9.15 am after an overnight fast of 12 h (period I) and vice versa (period II) with a one week wash out period in between. Placebo tablets were used as reference in the study. The common therapeutic dose of buspirone 10 mg was used in the study. A standardized oral glucose load containing 75 g glucose in 200 ml water [20] was given to all the subjects after buspirone or placebo administration on previously reported scheduled Tmax 45 min [5,21]. The oral glucose challenge procedure was performed to assess the effect of drugs on fasting as well as postprandial blood glucose and plasma insulin level according to a previously described procedure [22]. The blood samples (2 ml each) were collected as predose (before buspirone or placebo administration), postdose (after drug or placebo administration) and post oral glucose load (after oral glucose challenge followed by buspirone or placebo administration) at 0.5, 1.0, 1.5, 2.0, 2.5 and 3.0 h. Blood samples were collected through an indwelling cannula placed in a forearm vein during each period. After collection, the blood samples were immediately centrifuged to separate the plasma. All plasma samples were analyzed immediately for plasma glucose and insulin level. None of the subjects received any medication during the two weeks prior to the start of the study and during study periods. At the time of screening they were instructed not to take any prescription and over the counter (OTC) medications subsequently until the completion of the study. All the subjects were required to abstain from any xanthine derivative food or beverages or alcoholic products for 48 h prior to dosing and throughout the study periods. Subject safety was monitored for oral temperature, radial pulse, sitting blood pressure at the time of admission, prior to dose administration and before discharge in each period.

The results are presented as mean±SD. The data were analyzed statistically using one way analysis of variance (ANOVA) followed by student’s t test. The null hypotheses was rejected at P<0.05. 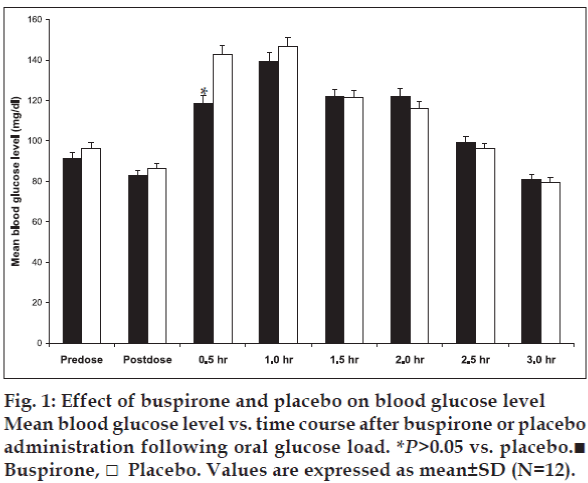 Administration of buspirone did not produce significant (p<0.05) change in fasting and oral glucose load induced plasma insulin level as compared to placebo (fig. 2). Although, a modest but statistically insignificant (p<0.05) decrease in plasma insulin level was also observed at 1.0, 1.5, 2.0 and 2.5 h following oral glucose load at the corresponding time points where increase in blood glucose level was observed in comparison with placebo (fig. 2). 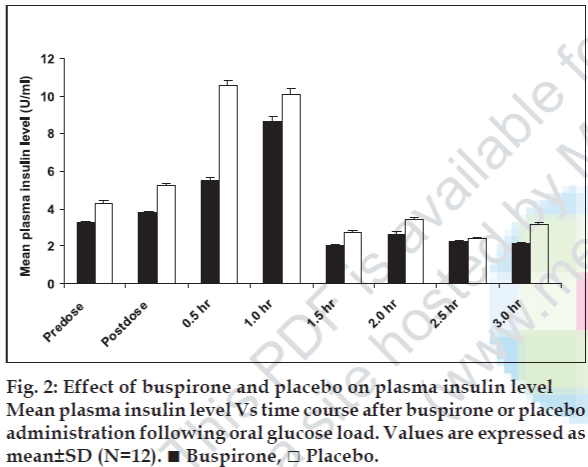 The present study investigated the effect of an antianxiety drug, buspirone on plasma glucose and insulin levels in normoglycaemic healthy human volunteers. As serotonin is involved in several psychiatric diseases such as depression, anxiety and schizophrenia etc. thus, the implication of the drugs for treatment of psychiatric diseases in diabetes mellitus acting through serotonin and its receptor appears to be necessary. Keeping this view buspirone was selected in the present study because of its 5- HT1A receptor partial agonist property.

Therefore, the present results suggests that the effect of buspirone on blood glucose level is independent of insulin components of blood glucose control mechanism similar to serotonin reuptake inhibitors such as sertraline [25] and buspirone might have reduce plasma glucose independently of insulin levels. Serotonin, its precursor and receptor agonists has been shown to modulate glucose transport by acting directly upon tissues such as skeletal muscle by virtue of its total body mass, might be responsible towards a reduction in blood glucose level [25-27].

Thus, we speculate that the possible mechanism may be due to an increase in glucose uptake across the cell membrane through non-insulin dependent pathways of blood glucose regulation. From the present study findings it can be inferred that serotonergic (5-HT1A) receptors may contribute in blood glucose regulation. The effect of buspirone on blood glucose level in diabetic patients and exact role of serotonergic receptors in blood glucose homeostasis in humans need to be assessed. These observations also help us to conclude that buspirone treatment decreases the blood glucose level and those who are on glucose lowering therapy need lesser doses of buspirone. This point is particularly important and should be remembered when insulin or oral antidiabetic agents are administered to diabetics, because of the possible risk of hypoglycemia.