Cyclosporine A (CsA) is a selective and powerful immunosuppressive agent which is widely used for organ transplantation [1-5], autoimmune diseases [6-8], and also for other diseases [9]. CsA inhibits the activation of calcineurin [10,11] and thereby causes inhibition of chondrogenesis [12], and muscle mass change [13]. CsA crosses the placenta blood barrier reaches to the embryo [2,4,14,15]. Many female patients that they should receive CsA, are in childbearing age or pregnant [1,9,16]. No systematic overview of the use of CsA in pregnancy has been conducted so far, and there are few controlled studies on CsA administration during pregnancy [1,2], although one case of CsA-induced osseous malformation, including limb defects, has been reported [17]. Also few studies address the weight or height of embryos. Furthermore, many studies have used a combination of medications and effects of individual agents on pregnancy have not been well established [1,2,4,5,18-20]. Other problems exist exclusively in organ transplant recipients (or other diseases), such as hypertension that may have also same impacts on birth weight and crown-rump length (CRL) [1,21].

The primary objective of this study was to determine whether CsA exposure in uterus is associated with low weight and low CRL of embryos.

All efforts were made to minimize both the suffering and the number of the animal used. In this study, the humane killing of the mice and embryos collection was carried out after approval by the Ethics Committees of Shiraz University of Medical Sciences.

In this experimental study, many out bred adult (male and female) mice were kept in a standard condition in separate cages [22,23] for one month. Female mice (50) were mated overnight with males, checked in the morning for vaginal plugs. The first day of gestation was considered to the day after plug was found [23]. CsA was dissolved in olive oil at concentration of 15 mg/ml [24]. Two groups of pregnant mice were randomly selected and were assigned into experimental and control groups. The experimental group received an intraperitoneal injection of CsA at dosage of 50 mg/ kg/day of body weight [25] and control group received an equivalent amount of olive oil on days 7, 8, and 9 of gestation.

First, the mice were anesthetized with ether inhalation and then killed by cervical dislocation [23] on days 13, 16, and 18 of gestation. The uterus and its contents were exposed by laparatomy. The weight and CRL of embryos were recorded. A comparison between two groups was made using Student’s t test. Comparisons resulting in P<0.05 were considered significant. 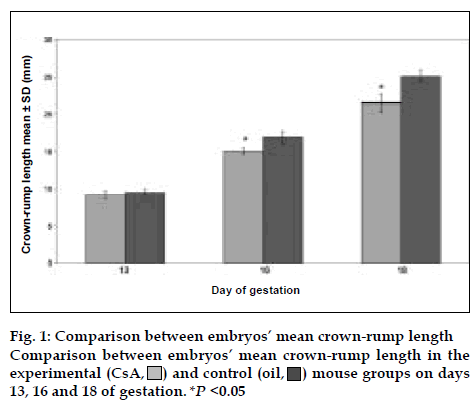 Fig. 2 illustrates the comparison of CsA effect on the weight of embryos. In all ages of gestation, the experimental group embryos had less weight than the control group and there were highly significant differences between experimental and control groups (P <0.05). The ratio of weight in experimental to control group was 0.56, 0.72, and 0.85 on days 13, 16, and 18 of gestation, respectively. Thus, CsA effect on weight was higher in the early days of gestation than last days. As shown in figs. 1 and 2, these results revealed that the mice treated with CsA had a significantly higher frequency of low weight and low CRL than the mice treated with olive oil alone. 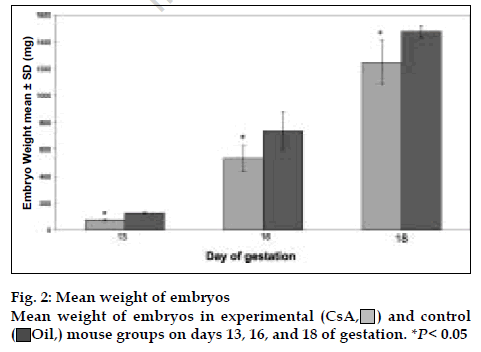 According to our data, CsA decreases CRL and weight of embryos. It supports the findings of other studies related to CsA effect on pregnancy outcomes.

There is little research on CsA effect on the height or CRL of embryos. Sgro et al. [19] showed that the embryo’s length was significantly lower in the study group as compared to the control group. Also, Pujals et al. [17] have reported that CsA decreased length of lower limb. In the present study, CsA effect on CRL was not significant in early days of gestation. Also other researchers have shown that in vitro treatment of CsA can interfere with mesenchyme and DNA content and inhibit chondrogenesis on limb bud [26,27] or can induce some osseous malformations [17] and bone loss [20]. CsA, via inhibition of calcineurin, can inhibit chondrogenesis process [12] and skeletal muscles mass change [13]. CsA effects on cartilage and muscles can cause, direct or indirect, shortening of limbs and body, although more researches are necessary to prove this subject.

Several reports have shown that children born by mothers who had taken CsA often present with the low birth weight (LBW), intrauterine growth retardation or small for gestation age [17,24]. Our data accords with other studies on the effect of CsA on weight of embryos. Rahbar and Forghani [28] reported that 77% of newborns, whose mothers used CsA, had LBW. There are similar reports about LBW in infants whose mothers used CsA alone or with combination to other drugs [29]. For example, LBW percentage reported by Lamarque et al. [14] was 44.3%, Armenti et al.21 44-65%, Janssen and Genta7 50%, and Moon et al.30 63.5%. Moon et al.[30] have reported that LBW of neonates was related to their mother’s hypertension. They compared infants of hypertensive and nonhypertensive mothers, although there was LBW in infants whose mothers did not have hypertension but received CsA.

The dosage used in this study considerably exceeds what is normally given to transplant recipients and other patients, although some patients have been given as much as 25 mg/kg/day or also 30 mg/kg/day in rats and 100 mg/kg/day in rabbits [31]. Gasser et al. [24] also used 50 mg/kg/day in mice for teratogenicity. The results of this study indicate that CsA causes low weight and low CRL in mice embryos, as compared with those published in the recent literature with CsA. CsA mostly decreased the weight and CRL of mouse embryos in the earlier and last days of pregnancy, respectively. It is recommended that the drug should not be taken during pregnancy, unless the benefit to the patient outweighs the risk for the fetus. Obviously, more research should be done on the subject.

The support provided by the Vice-Chancellor for Research of Shiraz University of Medical Sciences is gratefully acknowledged. We wish to thank the personnel at animal house in Shiraz Medical School.