The aim of the present study was to study the effect of chronic treatment (9 weeks) of fluoxetine (20 mg/kg p.o.) a selective serotonin reuptake inhibitor on blood glucose level and in prevention of diabetic neuropathic pain perception. Evaluation of diabetic neuropathy was performed after 9 weeks of single injection of streptozotocin (70 mg/kg i.v.) in rats. Blood glucose level, glycated haemoglobin, grip strength, pain sensitivity and threshold in diabetic rats were measured at the end of 9 weeks. The results of the present study indicate that the 9 weeks treatment of fluoxetine demonstrates hypoglycemic effect; it marked decreases the blood glucose level in diabetic treated animals. There was also decrease in the grip strength in diabetic rat indicates to induction of neuropathy or nerve damage. Fluoxetine increase the grip strength of diabetic rats. There was also found loss of pain perception in diabetes rats which measured using hot plate and tail flick methods. Fluoxetine increases the licking time and withdrawal latency in hot plate and tail flick test respectively indicates the presence of pain perception and prevention of nerve damage demonstrates its protective effect in diabetic neuropathy. Our study concludes the chronic treatment of fluoxetine significantly decreases the glycemic level as well as it protected from the development of diabetic neuropathy.

Diabetic neuropathy (DN) is a peripheral nerve disorder caused by diabetes which leads to cause a significant morbidity [1-3]. The risk of developing diabetic peripheral neuropathy (DPN) increases with duration of the disease and degree of glycemic control, and other contributing factors such as hypertension, dyslipidaemia, smoking, body mass index and hyperinsulinaemia [4]. The symptoms of diabetic neuropathy are often slight at first but can occasionally flare up suddenly and affect specific nerves so the affected individual will develop double vision, drooping eyelids, or weakness and atrophy of the muscles. Nerve damage caused by diabetes generally occurs over a period of years and may lead to problems with the digestive tract and sexual organs, which can cause indigestion, diarrhea or constipation, dizziness, bladder infections, and impotence [2,5].

The main risk factor for diabetic neuropathy is hyperglycemia. It is important to note that people with diabetes are more likely to develop symptoms relating to peripheral neuropathy as the excess glucose in the blood results in a condition known as Glucojasinogen. This condition is affiliated with erectile dysfunction and epigastric tenderness which in turn results in lack of blood flow to the peripheral intrapectine nerves which govern the movement of the arms and legs. The progression of neuropathy is dependent on the degree of glycemic control in both Type 1 and Type 2 diabetes. Duration of diabetes, age, cigarette smoking, hypertension, height and hyperlipidemia are also risk factors for diabetic neuropathy [4,6,7].

Since DN is not clearly understood, it is hard to make a definitive course of treatment [9]. Drugs that have been used in the management of DN include tricyclic antidepressants and selective serotonin reuptake inhibitors [9,10]. Many pharmacological options are available to treat DPN but still it is difficult for patients to obtain complete relief because of poor glycemic control. Prevention through strict glycemic control remains the mainstay of therapeutic intervention because effective disease modifying therapies are yet not available. In reported case study fluoxetine found to shows adverse hypoglycemic effect and it was associated with increased blood insulin levels and also regulate the level of neurotransmitters serotonin and epinephrine [11,12]. So by considering the hypoglycemic side effect the present study was aim at to evaluate the influence of chronic treatment of fluoxetine 20 mg/kg (p.o.) on blood glucose level and on progression neuropathy in STZ-induced 9 week diabetic rats.

Male Wister rat weighing 175-200 g were used. The animals were fed with standard diet (Amrut feed, Sangali, Maharastra), had free access to water under well ventilated condition of 12 h day light cycle. The animals were adapted to laboratory condition for 7 days prior to the experiments. The studies were performed with the approval of Institutional Animal ethics committee (IAEC) of Sudhakarrao Naik Institute of Pharmacy, Pusad, India (729/02/a/ CPCSEA).

Experimental model of diabeties was induced by i.v. injection of streptozotocin (70 mg/kg) in Wister rat (180-220 gm) and the chronic treatment of Fluoxetine (20 mg/kg p.o.) was started after stabilization blood glucose level from day 13th of streptozotocin injection. Effect of Fluoxetine on blood glucose level, glycosylated haemoglobin and diabetic neuropathic pain were evaluated after 9th week. Induction of diabetic neuropathy was evaluated by grip strength [13,14] and the neuropathic pain perception by threshold by tail flick and hot plate method [13-15].

Measurement of DN by behavioral studies

A grip strength determination was used for evaluating neuromuscular strength [13,14]. The grip strength of animals was measured by simply hanging of animals with their Fore limb on fine metal wire which was held at two end of pole. The time taken to hold the metal wire to fall on the surface was considered for the muscle strength determination. The animals whose muscle or nerves get damage or weak it get fall soon on the floor. The force achieved (in terms of time) by the animal for staying in hanging stage was recorded.

Evaluation of the effect of diabetic neuropathy on pain sensitivity and pain threshold were done by Hot Plate and Tail Flick methods [12,14,15]. The rats were placed on the hot plate (55-58°) and the time until either licking or jumping occurs was recorded by a stop watch. A cut off time of 10 s was kept to avoid damage to the paw of the animal.

Evaluation of pain threshold in diabetic rats was determined by withdraw latency in tail flick test. Tail of each diabetic rat was exposed to radiant heat which was given by placing the hot water in glass. The intensity of radiant heat (55-58°) was adjusted to obtained withdrawal latency of not more than 6 second in both diabetic and non-diabetic rats. The tail flick latency is the time interval taken by rat to flick its tail after exposure to a source of radiant heat. Cut of time was fixed at 10 s.

In developed countries diabetes is the leading known cause for the neuropathy pain and it is the most common complication and greatest source of morbidity and mortality in diabetes patients. It is estimated that the prevalence of neuropathy in diabetic patients is approximately 20%. DN is implicated in 50-75% of non-traumatic amputations. Generally, the largest cases of neuropathy in patients (referred to as idiopathic in origin) are of unknown causes. Other known causes include genetic factors, damaging chemical agents such as chemotherapy drugs, and HIV. Since diabetic neuropathy is not clearly understood, it is hard to make a definitive course of treatment [1,16].

Various classes of antidepressant agents that help in regulation and treatment of depressive emotions and naturopathic pain by sustaining balanced level of two neurotransmitters serotonin and norepinephrine. Serotonin and norepinephrine are implicated in modulating descending inhibitory pain pathways in the central nervous system, and are known to help in regulating emotions as well as sensitivity to pain [1,17].

In diabeties there is loss of pain perception and it is thought due to nerve damage and induction of peripheral neuropathy [18,19]. Painful diabetic neuropathy significantly affects the quality of life; so far no ideal drug has been available for its management. In the absence of curative therapy, the main aim of the management is to provide symptomatic pain control along with good glycemic control. In reported case studies fluoxetine found to shows hypoglycemic side effect and it was associated with increased blood insulin levels and also regulate the level of neurotransmitters serotonin and epinephrine [10-12]. So by considering the hypoglycemic side effect and regulating the level of neurotransmitters the present study was undertaken to evaluate the influence of chronic treatment (9 weeks) of fluoxetine 20 mg/kg (p.o.) on blood glucose level and on progression neuropathy in STZ-induced diabetic rats.

Results of chronic treatments with fluoxetine demonstrates to significant decreases in the blood glucose level at 30th and 60th day while the more significant (P<0.01) effect observed only on 60th day (fig. 1). The observed effect of fluoxetine was comparable to standard hypoglycemic agent glibenclamide. Previously it is reported to show the hypoglycemic reaction in one of the case report of patient administered with fluoxetine. The results are also similar with the earlier findings of sertalline which belongs to same antidepressant category [10-13]. The main risk factor for DN is hyperglycemia. People with diabetes are more likely to develop symptoms relating to peripheral neuropathy as the excess glucose in the blood results in a condition known as Glucojasinogen [20]. The risk of developing DPN increases with duration of the disease and degree of glycemic control. The symptoms of diabetic neuropathy are often slight at first but can occasionally flare up suddenly and affect specific nerves so that an affected individual will develop double vision, drooping eyelids, or weakness, atrophy of the muscles and nerve damage [2,5].

Diabetic condition has been reported to cause a decrease in the antinociceptive effect of drugs like morphine [18,19]. Previously it is reported that fluoxetine has antinociceptive effect [21] while the results of the present study demonstrated that the antinociceptive effect of fluoxetine is attenuated in diabetic animals which was similar to that reported for morphine in diabetic animals earlier [18,19]. The decreased antinociceptive effect in diabetes may be due to development of DN characterized by neurodegeneration resulting in the loss of pain perception [18,20]. In the present study the pain threshold measured by hot plate and tail flick method of analgesia, indicated to significant (P<0.05) decreased in the foot withdrawal and flicking latency (time interval taken by rats to withdrawal its legs or flick its tail after exposure to source of radiant heat) in both hot plate and tail flick test respectively in diabetic rats (figs 3 and 4). These results indicated a loss of pain perception in diabetic rats in both hot plate and tail flick method, which could be attributed to nerve damage resulting due to the development of DN in 9-weeks diabetic rats [18]. While chronic treatment with fluoxetine caused an increase (P<0.05) in the latency time in both models respectively. The increase in latency time indicate presence of pain perception in animals thus it conclude that fluoxetine protect from the nerve damage in the diabetic animals. The prevention or management in the DN in the present study may be due to controlling the glycemic level in diabetic rats.

Thus from the results it indicates that chronic treatment of fluoxetine reduced the blood glucose level as well as prevent progression of diabetic neuropathy in streptozotocin-induced diabetic rats. So it can be concluded that fluoxetine can be used as ideal drug which could offer a better choice in the curative therapy for DN. Which can act by, either preventing the nerve damage or by providing symptomatic pain control along with good glycemic control. Hence, it could be helpful in treating the diabetic patient having the complication like diabetic neuropathy. 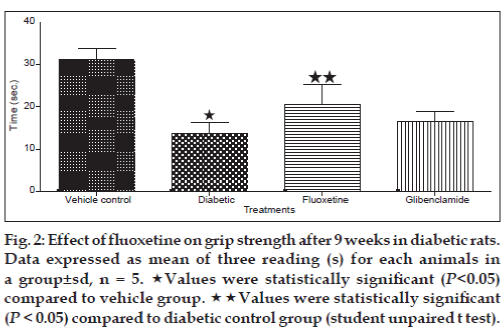 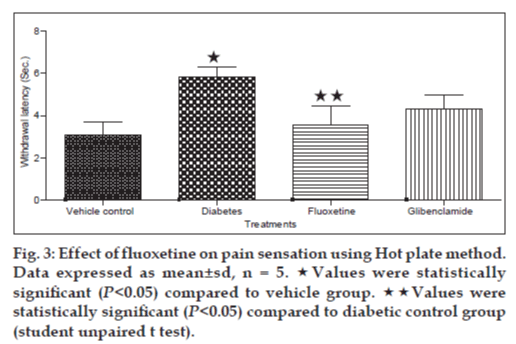 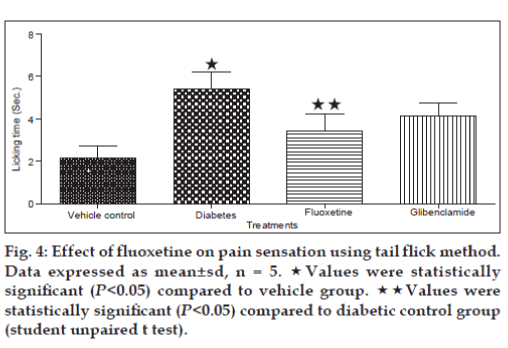