Effect of lycopene on serum nitrite-nitrate levels in diabetic rats

Diabetes mellitus is a genetically inheritable, chronic, metabolic disease, which is of two types, type I (insulin-dependent diabetes mellitus) and type II (noninsulin-dependent diabetes mellitus) diabetes. The effects of diabetes mellitus can be long-term damage, dysfunction and failure of various organs [1]. In living cells, nitrites and nitrates as metabolites can be converted to nitrosamines by way of interaction with amino compounds in stomach due to strongly acidic conditions [2]. Also, nitrosamines are formed due to the interaction of various nitrating agents (e.g. nitrite, nitrogen oxide) and amines in the foods [3]. In the previous studies, nitrosamine species have been found to be toxic to pancreatic beta cells and increase the risk of developing type I and type II diabetes in animal studies as well as epidemiological investigations of type I diabetes [3].

An inorganic free radical, nitric oxide (NO), is firstly responsible for regulation of vascular tone and is considered as an endogenous mediator derived from endothelium. NO is a biological molecule, which is formed catalytically from the essential amino acid L-arginine [4]. NO regulates many physiological and pathophysiological processes such as cardiovascular, inflammatory, immune and neural functions by passing through cell membranes as a gaseous signal-transmitting molecule [5].

Lycopene is a polyunsaturated unsubstituted alkene that has a symmetric plane. Like the other carotenoids, lycopene is also in tetraterpene (C40H64) structure and it is a combination unit of eight isoprenes (C5H8) [6]. The predominant source of lycopene is tomato and tomato-based products in the human diet. A strong correlation has been found between lycopene content and antioxidant activity [7]. Lycopene or its indirect effects can prevent the oxidative reactions that arise during formation of nitrosamines in human cells.

Seven to eight week old Wistar rats weighing in the range of 250-300 g were procured from the Experimental Animals Unit of Yuzuncu Yil University. These rats were randomly divided into four groups of 7 animals each. They were fed with commercial rat pellets ad libitum and allowed access to clean drinking water. They were kept at room temperature (approximately 28°). The groups were identified as control group (CG), diabetes group (DG), lycopene group (LG) and diabetes-lycopene group (DLG).

Nitric oxide (NO) is an extremely unstable molecule and is rapidly converted to nitrite (NO2-) and nitrate(NO3-) in vivo and in vitro, therefore serum NO2- and NO3- levels have been used in vivo and in vitro as an index of NO generation [11]. NO molecule is a short-lived gaseous lipophilic metabolite produced in almost all tissues and organs, which exerts a variety of biological actions under both physiological and pathological conditions. NO is a paracrine mediator formed from its precursor L-arginine by a family of NO synthases (NOSs) with stoichiometric production of L-citruline [12]. As shown in Table 1, the obtained results of nitrite levels range from 6.63±0.41 to 12.58±0.30 ppm in serum samples (P<0.05). Otherwise, the nitrate levels differ from 21.92±0.39 to 24.68±0.51 ppm in serum samples (P<0.05). As seen from the results that all groups (DG, LG and DLG) have higher nitrite and nitrate levels than control (P<0.05).

Another important parameter is the proportion of [NO2-]/ [NO3-] which is an indicator for NO radical formation. NO is rapidly removed by diffusion through tissues into red blood cells, where it is rapidly converted to nitrate by reaction with oxyhemoglobin [13]. This highly reactive cellular radical can cause oxidative damage of biomolecules which could lead to the development of many chronic diseases such as atherosclerosis, cancer, diabetes, rheumatoid arthritis, post-ischemic reperfusion injury, myocardial infarction, chronic inflammation, stroke and septic shock, aging and many more [14]. For this reason, greater importance should be attached to the [NO2-]/ [NO3-] ratio. The ratio values obtained were, CG (21.46), DG (21.98), DLG (33.52) and LG (33.76) as shown in fig. 1. Both lycopene groups, LG and DLG demonstrated higher [NO2-]/ [NO3-] values compared to CG and DG. It is interesting to note in this context that in vivo production of inflammatory cytokines in human lung cancer and increase in tumor-associated NO production depended on increased levels of [NO2-]/ [NO3-] [15,16]. 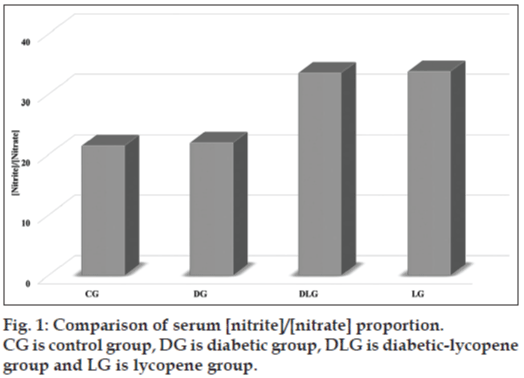 The aim of this study is to investigate whether lycopene has protective effect on the distorted antioxidant balance caused by diabetes. Zhao et al. [17], showed that plasma nitrite-nitrate levels gradually declined with time in their study on alloxan-induced diabetic dogs (40-60 mg/kg). It was recorded that plasma nitrite-nitrate levels decreased expressively at the measurements were made at the end of the day on STZ-induced diabetic rats [17]. In contrast, in another study conducted in STZinduced diabetic rats, it was detected that plasma nitrite-nitrate levels were significantly increased in eight-week diabetic group [18]. Similarly, it was reported that nitrite-nitrate levels in urine specimens of diabetic rats were fairly high as compare to the results of control group and this doesn’t change as a result of vitamin-E treatment given as antioxidant. In the same study, it was shown that the amount of nitrotyrosine in urine samples was specifically high and this was partly reduced with antioxidant vitamin-E treatment [19]. The results of this study conform with results obtained in our study.

According to literature, after using three different resveratrol applications, it was detected that plasma nitrite-nitrate levels were significantly elevated but this increase didn’t change according to resveratrol doses and duration of application [20]. It was detected that endothelial NOS (eNOS) protein expression in myocardial tissue of STZ-induced diabetic rats increased significantly after resveratrol application at the doses of 2.5 mg/kg per day for 15 days [21]. In another study, it was shown that resveratrol application to STZ-induced diabetic rats, at the doses of 5, 10 and 20 mg/kg for 28 days starting from 4th week, reduced the amount of nitrite-nitrate levels in brain tissues, which increased depending on diabetes. A suppressive paradoxical effect of resveratrol on nitric oxide formation could be explained due to its inhibitory effect on inducible NOS (iNOS) [22].

In conclusion, lycopene is known to be an antioxidant compound which has an important role in eliminating free radicals, released as a result of oxidative stress that develops by depending on various factors. It may be result of antioxidant effect that the level of nitrate was low in diabetes-lycopene group as diabetes group. Besides, it can be said that high levels of nitrite and nitrate in lycopene group like control group may be caused by an inflammatory condition and dose arranging of lycopene should be considered as an important criterion in terms of disrupting the oxidant-antioxidant balance. In summary, lycopene, a natural antioxidant exhibited free radical scavenger properties in living cells and at the same time affected the formation of nitrite/nitrate level.