Effect of Metabolic Syndrome on Anxiety in Mice

Metabolic syndrome (MS) is a conglomerate of interconnected disorders [1]. Almost 25 % of the adults worldwide suffer from MS. It increases the risk of type 2 diabetes, heart attack and stroke in developing nations [2]. More than 17 % of the European population in the age group of 44-60 y suffer from MS and 80 % of them has elevated blood pressure [3]. MS is one of the commonest lifestyle problems in different parts of Asia that include China and India [4]. Among Indians, MS are predominantly common in women due to high carbohydrate intake especially in Asian Indian phenotype [5,6]. Late complications of MS coexist with various pathological complications like neuropathy, colorectal cancer, menstrual disturbances and arthritis thus broadening the co-morbidities [7]. Antioxidantrich diet especially food containing cinnamon and hydroxycinnamic acids has been shown to prevent MS-associated cardiovascular complications [8]. MS has also been associated with CNS disorders like anxiety and depression [9]. Anxiety disorders have been independently associated in MS population [10]. On the other hand, higher evening cortisol levels are common in patients suffering from a major depressive disorder. Bardet-Biedl syndrome (BBS), a condition similar to MS, is associated with obesity, hyperlipidaemia, liver dysfunction as well as elevated insulin and leptin [11]. BBS individuals have been shown to be more prone to anxiety disorders. Obesity, induced by carbohydrate diet followed by induction of stress may promote the development of anxiety-like behaviour compared to animals on normal diet [12]. A transgenic animal model of obesity and diabetes, the db/db mice made by a point mutation of leptin receptor gene also showed anxietylike behaviour [13].

Though there is significant clinical evidence of the coexistence of depression, MS and established common therapeutic objective to treat anxiety and depression associated with MS, there are relatively few animal studies trying to determine the pathways linking MS and anxiety. Obesity or type 2 diabetes has been shown to have a bidirectional link with depressive disorder [14]. However, whether metabolic disorders may produce anxiety or depression and the effect of antidepressant therapy on the later conditions is less well-characterized.

Many transgenic and drug or diet-induced MS models have been established and are in practice, but a correlation model of anxiety and the metabolic association is less established. In this study, we evaluated the relationship between different behavioural and biochemical aspects of anxiety in association with diet-induced MS on Swiss albino mice. We also determined the primary neurotransmitters responsible for MS-associated anxiety in these animals.

Table 1: Ingredients for the high-fat diet

Ingredients for the high-fat diets were mixed, formed into a dough with water, rolled into pellets, wrapped with plastic wrap, and stored at –20° until use to minimize oxidation. These small pellets were given to mice every day. Drinking water was supplemented with 20 % fructose solution as the source of highcarbohydrate in the diet.

Apparatus consisted of a plexiglass tank (45×25× 25 cm) with a block (6×4.5×5 cm) at the centre of the floor. The tank was filled with water at 25° covering up to 1 cm of the central block. Mice were placed on the block for 1 h daily in the daytime for three consecutive days keeping at least 18 h interval [15]. All mice were assessed for measuring anxiety using elevated plus maze (EPM). Food intake/mouse/day, the weight of the mice and waist circumference were calculated and lipid profile, oral glucose tolerance, fasting blood sugar, brain corticosterone, blood pressure were measured. The high-fat and high-carbohydrate (HFHC)-fed mice showing ≥30 g body weight, fasting blood glucose of 140 mg/dl and systolic blood pressure of 130 mm Hg were considered as MS.

In the next set of experiment, mice were fed with highfat diet and 20 % fructose water. After 4 w MS mice were divided into 11 groups of six animals each. One group was kept drug-untreated. Rest of the 10 groups were treated with the following compounds: diazepam (0.5 and 1 mg/kg) [16,17]; phenobarbitone (20 and 40 mg/ kg) [18]; gabapentin (10 and 30 mg/kg) [19]; hydroxyzine (5 and 10 mg/kg) [20]; fluoxetine (5 and 10 mg/kg) [21] successively just before the behavioural and brain corticosterone measurement. Changes in food intake, weight of the animal, waist circumference, systolic blood pressure, fasting blood sugar, oral glucose tolerance, and lipid profile were assessed for animals.

Non-invasive blood pressure system (IITC Life Sciences, USA) was used to measure systolic and diastolic blood pressure. Mice were placed in a clear plastic restrainer tube with black nose cone and tail hole pieces at either end. Mice were introduced in the tubes and placed on a platform heated to 35° and allowed to warm for 5-15 min before the experiment. Mice were habituated to the procedure with 10-30 preliminary cycles; after that data measurements were recorded for each mouse. Measurements were performed at the same time each day between 9 am to 2 pm in a closed room to avoid noise.

Blood was collected retro-orbitally from all the groups of mice at 5.30 pm in the same room under similar condition. Corticosterone was estimated in plasma samples using UV/Vis spectrophotometer (UV/Vis- NIR spectrophotometer Agilent) using the procedure of Bartos and Pesez [24].

EPM is made up of two closed and two open arms connected to a central platform. Mice were placed individually in the centre of the EPM, head facing open arm. The time spent in both the open and closed arms were recorded for 5 min. The numbers of entries into the open and closed arms were also counted during the test. An entry was defined as having all four paws within the arms. Data obtained from the experiment were expressed as mean±SEM [25].

Mice were placed in separate cages containing 20 glass marbles (10 mm diameter) evenly spaced on saw dust. After 30 min exposure to the marbles, mice were removed. The number of marbles buried (>50 % under saw dust) was determined.

HFHC diet significantly increased the body weight and waist circumference (p<0.001) of the animals compared to controls indicating the development of central obesity. Initially, the food intake was normal for all the animals, which increased significantly after four weeks in case of HFHC diet animals. Biochemical parameters associated with MS including fasting blood glucose levels were found to be significantly high (p<0.001) after two weeks in HFHC diet (Table 2). OGTT for mice was also assessed to confirm the insulin resistance. The area under the curve for elevated blood glucose was much higher for HFHC animals when compared to healthy controls (Figure 1) suggesting glucose tolerance an indication of insulin resistance [26]. Elevated systolic blood pressures, a diagnostic characteristic for MS [27] were measured after 4 w of HFHC diet. Systolic blood pressure in HFHC group mice was significantly higher (p<0.001) compare to control animals. Lipid profile of HFHC mice was measured, which also been reported in MS [28]. HFHC diet led to significant increase in LDL and TG and reduction in HDL levels compared to mice receiving normal pelleted diet (Table 2). Hence, it could be concluded that Swiss albino mice on high fat and 20 % fructose water developed signs of MS including high fasting blood glucose, glucose tolerance, hyperlipidaemia including hypertriglyceridemia and hypertension all suggestive of MS development. 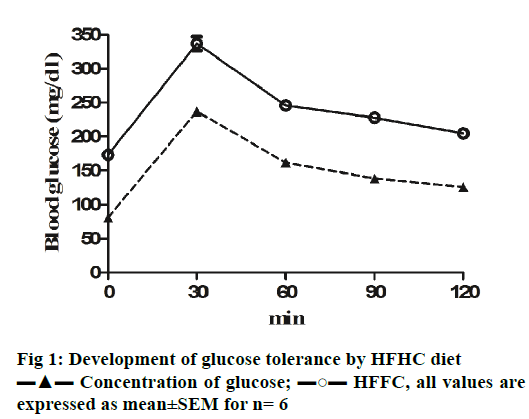 Figure 1: Development of glucose tolerance by HFHC diet
▬▲▬ Concentration of glucose; ▬○▬ HFFC, all values are expressed as mean±SEM for n= 6 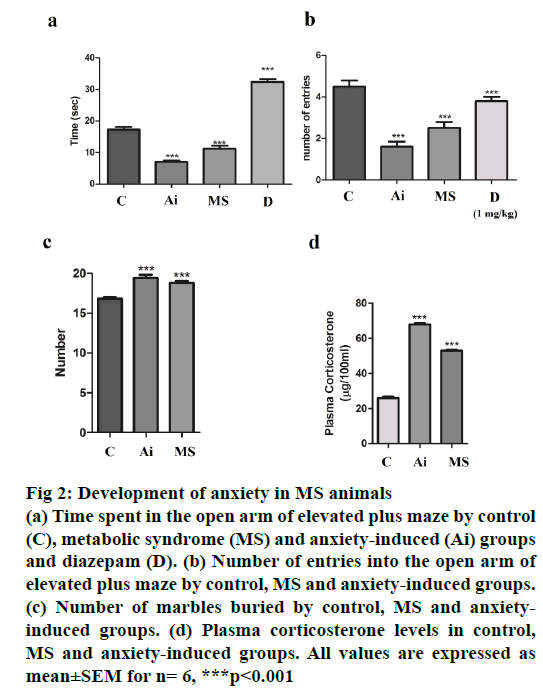 In the present study, MS was successfully induced using HFHC diet in Swiss albino mice, which was characterized by elevated fasting blood glucose levels, insulin resistance, hyperlipidaemia, and hypertension. Diet-induced model of MS appear to have various advantages over genetic models. The MS in human is a multifactorial disease, which in most cases does not involve mutations in the leptin gene a standard feature in most transgenic animals. Thus the human form of MS is different from the genetic mice models of obesity and MS [29]. The diet-induced models of MS including highfat or high-carbohydrate diet or their combinations were shown to correlate better with the human form of the disease. However, diet-induced murine models of MS mostly involve various strains of rat or C57bl/6j mice [29]. In this investigation high-fat diet was used along with 20 % fructose water for four weeks to induce MS for the first time in Swiss albino mice; the most commonly used outbred laboratory mice. Mice developed distinguishing characteristics of human MS including high fasting blood glucose levels and glucose tolerance, high cholesterol and TG levels, increased central obesity, body weight, and hypertension. Animals on high-carbohydrate diet have been shown to be more prone to anxiety [12], while db/db obese mice have shown greater anxiety-like behaviour compared to their db+ counterparts. Anxiety-like behaviour attributes to neuroinflammatory changes with increased levels of cytokines including interleukin-1β, tumor necrosis factor-α and interleukin-6 and a parallel reduction in hippocampal brain-derived neurotrophic factor [30,31]. Other studies on Bbs4-null mice, with a mutation that also leads to obesity with elevated insulin and leptin levels similar to MS animals, showed anxiety-related responses and reduced social dominance [32]. While a recent study also demonstrated that high-fat dietinduced diabetic mice showed depressive behaviour with impaired 5-HT function [33]. In the present study, diet induced-MS-associated increase in anxiety could be demonstrated as measured by less time spent in the open arm of plus maze and number of marbles buried. These behavioural parameters could be correlated with increased plasma corticosterone levels; an established biomarker increased during stress in rodents. Induction of anxiety in neonatal rats might result in upregulation of genes related to serotonin (5-HT) and GABA [34] in amygdala region. Inescapable foot shock has also been reported to cause hippocampal cell damage along with glutamate/GABA imbalance [35]. The GAD65 enzyme is critically involved in regulation of GABA. GAD65 mutants showed hyper excitable brain primarily at the amygdala and hippocampal regions. These animals also showed increased levels of anxiety, while GAD65 deficient animals were found to be less prone to external stress [36]. Restraint stress has also shown reduced GABAA currents in the amygdala resulting in excessive amygdalar excitability [37]. This stress model might also decrease levels of the cortical and hippocampal GABAA receptor, thus modulating the functions of HPA axis [38]. Studies on human post traumatic stress disorder (combat post traumatic stress disorder patients) using magnetic resonance have shown abnormalities in cortical or parito-occipital-temporal cortical GABA [39-41]. In separation anxiety models (maternal separation; MS) role of GABA has also been documented. MS might enhance tonic GABA currents promoting subsequent neurogenesis and differentiation of GABA neurons during adulthood [42]. MS during breastfeeding affects the expression and function of one of the GABAA subunits in a gender specific manner [43]. This study demonstrated that diazepam, phenobarbitone and gabapentin, which were all involved in activation of GABAA receptors could dose-dependently reverse anxiety-like behaviour in MS induced mice. The above observations suggested the role of GABA pathway in MS-associated anxiety in these animals. However, the brain GABA levels remained unaltered in MS animals when compared to control animals. Hydroxyzine and fluoxetine, which act on the serotonergic system were unable to reverse the MS-associated anxiety disorders suggesting less involvement of serotonergic pathways in the above process.