Extracts of Aloe vera whole plant, Eucalyptus globulus leaves, Ficus infectoria bark, Ficus religiosa bark and Piper betel leaves were studied for antibacterial activity on resistant and sensitive strains, isolated from skin and soft tissue infections. A combination of hot alcoholic extracts of Ficus infectoria, Ficus religiosa and Piper betel were found to be more effective against all the isolates. The combined extract was formulated in different ointment bases such as polyethylene glycol, gelatin, sodium alginate, carbopol, cream base and honey. These were then evaluated to find a suitable base for preparation of an ointment. In vitro study of the release of antimicrobials and kill-time studies of the herbal ointments was carried out against multi-drug resistant isolate of Pseudomonas. The ointment showed bactericidal activity within 2 h against the resistant strain of Pseudomonas spp.

Multi-drug resistance among many bacterial species has been reported to be on the increase due to inappropriate or widespread use of antimicrobials [1]. Resistance to antimicrobials has been observed in various parts of the world. During 1997-1998, Staphylococcus aureus was found to be the causative agent in most of the skin and soft tissue infections, and among these infections methicillin resistant Staphylococcus aureus (MRSA) was the major causative agent [2]. Vancomycin resistant Enterococcus faocium has also shown a progressive increase in various infections [3]. Drug resistant strains are causing severe problems in many infections including skin infections such as carbuncles, folliculitis, impetigo, and burn wound sepsis. Antimicrobial resistance prolongs the duration of hospitalization, thereby increasing the cost of patient care.

Globally medicinal plants have been used since ancient times in one form or the other. Aloe vera gel [4], neem [5] and eucalyptus oil [6] have been reported to show antimicrobial activity [6]. The aim of the project was to develop an herbal ointment for controlling skin and soft tissue infections due to multi-drug resistant strains.

Five commonly available medicinal plants were selected for the study; they were procured from Kashele Forest Academy, Karjat, India. They were authenticated by the Department of botany, Smt. CHM College for the identification of the plant species before employing them for the study. The plants collected were whole plant of Aloe vera, Eucalyptus globulus (Nilgiri) leaves, Ficus infectoria (Pakar) bark, Ficus religiosa (Pipal) bark, and Piper betel (Betel) leaves. The extracts were prepared with ethyl alcohol of analytical grade and distilled water for aqueous extract preparation.

Swabs were collected from patients suffering from skin infections like burn wound sepsis, carbuncles, cellulitis, folliculitis, furuncles and impetigo infections. In case of hospital samples transport media i.e. Stuart’s Transport media was used [8]. The sample collection was in presence of the doctor and approvals of their IEC were obtained.

Samples collected were streaked on nutrient agar. According to the Gram’s character and other biochemical reactions, the isolates were identified with the help of Bergey’s Manual [9]. The isolates obtained were checked for their sensitivity to various antibiotics currently used for treating various skin infections by Kirby Bauer disc method [10]. The antibiotics of different groups were used for the study and included aminoglycosides (amikacin, gentamycin, kanamycin, streptomycin, tobramycin), β-lactams (ampicillin, penicillin), chloramphenicol, glycopeptide (vancomycin), lincosamides (clindamycin), macrolides (erythromycin), quinolones (nalidixic Acid, ciprofloxacin), sulfonamides (sulphadiazine), and tetracycline.

Agar ditch method was used for the initial screening of the antibacterial activity of the plant extracts [11]. 0.5 g of extract in 10 ml nutrient agar was used (5% extract). Minimum inhibitory concentration (MIC) of the individual plant extracts was determined by plate dilution technique [12]. Combination of the active extracts of pakar, pipal and betel were used in the combination form for further study.

Stability studies of the active ointments were carried out for parameters like pH, colour, odour, antibacterial activity and sterility [14]. The different ointments prepared were checked for stability by standard method. The ointment was kept at 4°, 27°, 37° and 45° for 4 weeks. Each week the ointment was checked for its colour, smell, odour, pH, texture and its antibacterial activity.

All the individual extracts and their combinations were tested for toxicity by topical application in Sprague Dawley rats [22]. This test is designed to measure the potential to cause sensitization and it also provides a measure of irritancy potential of the ointments. The rats were Sprague Dawley, 150 g in weight and the protocol was approved by the IAEC and experiments were carried out in the CPCSEA registered animal house. The dorsal surface of the Sprague Dawley rat was depilated using depilation cream; the rats were anesthetized with anesthetic ether during the procedure. The test material was applied to the depilated dorsal surface of the rat for 72 h. 100 mg of dose was applied each day. Then the skin was observed for 72 h for erythema, edema and necrosis.

The fi rst phase of the project was sample collection from various skin and soft tissue infections. Forty six samples were collected (Table 1). Among the 46 samples collected, 9 samples showed mixed infection and 24 samples had single type of infection. It was observed that Pseudomonas spp and Staphylococcus spp. were the predominant organisms causing skin infections, each accounting for fifteen, (35%) and thirteen, (30%), respectively, followed up by Klebsiella spp. six, (14%), Enterobacter spp. five, (12%), Escherichia coli (three, 7%) and Micrococcus spp. (one, 2%) as shown in fig. 1. 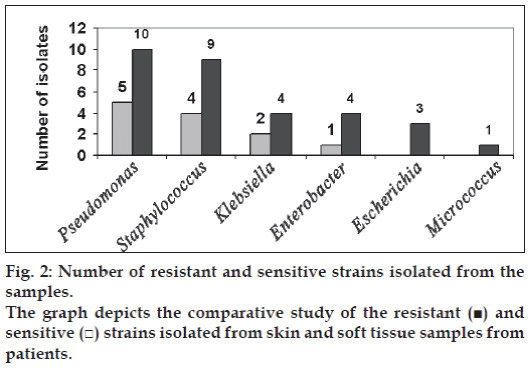 Initial screening of the antibacterial properties of the selected plant extracts was carried out by agar ditch method using 5% concentration of extract. Hot alcoholic extracts of pakar, pipal, betel, cold alcoholic extract of Aloe vera, pakar, betel, nilgiri and hot aqueous extract of betel were found to possess antibacterial activity against both the resistant and sensitive isolates and also against standard ATCC strains of Staphylococcus aureus ATCC no. 2901 and Pseudomonas aeruginosa ATCC no. 2862.

Table 2: Determination of minimum inhibitory concentration of the plant extracts.

The combination of extracts was further formulated into different bases selected, to prepare a topical ointment. The antibacterial activity of the ointment was checked by agar cup method using resistant strains of Pseudomonas spp and Staphylococcus spp (Table 3).

The antibacterial activity of the combination 1 (hot alcoholic extract of pakar, pipal and betel plant extracts) in different bases was determined against resistant Staphylococcus spp. (SR) and resistant Pseudomonas spp. (PR) by Agar cup method and the zone of inhibition was determined in mm.

Hydrophilic ointment, Aloe gel, petroleum jelly and oil base did not exhibit any zone of inhibition towards the resistant organism, due to reduced diffusible property of the formulated ointment. Ointments prepared in sodium alginate base and gelatin base were water-soluble and exhibited good antibacterial activity. However the drawbacks of the bases were that, they were contaminated easily and had no shelf life. Hence the above bases were not considered for further studies.

Kill time studies showed that all the above selected ointments exhibited antibacterial property within 2 h. Base B was effective but was found to be unstable after 2 w, showing change in pH and cracking of the base. Honey and polyethylene glycol bases themselves possessed antibacterial activity, and was observed that the base inhibited the isolate within 7 h and 6 h, respectively.

Base A, polyethylene glycol base, carbopol base and honey showed good antibacterial property. The bases were non-greasy, water-soluble and water washable. These bases were selected for formulation of the plant extract in the form of an ointment.

The ointments showed bactericidal activity within 2 h against resistant strain of Pseudomonas spp. Toxicity test carried out on Sprague Dawley rats showed no erythema, edema and necrosis, proving the extracts to be non toxic topically. Thus ointments can be further studied for its wound healing properties in vivo.

The authors are grateful to University Grants Commission for the funding of the project as a minor research project.