Cyclodextrins (CDs) are cyclic torus-shaped molecules with a hydrophilic outer surface and a lipophilic central cavity, which can accommodate a variety of lipophilic drugs. As a consequence of the inclusion process, many physicochemical properties such as solubility, dissolution rate, stability and bioavailability can be favourably modulated [1-3]. Cyclodextrins have been receiving increasing application in pharmaceutical formulations in recent years due to their approval by various regulatory agencies [4,5]. However, the use of cyclodextrins in solid oral dosage forms is limited to low dose drugs with large stability constants due to the mass limitations of oral dosage units [3]. Therefore, in cases where the low complexation efficiency would require a larger amount of CD than that acceptable for solid or liquid dosage forms, the enhancement of the complexation capacity of the chosen CD is of practical importance. On this subject, earlier papers have reported [2,6,7] the positive effect of the addition of small amounts of a suitable water-soluble polymer to a drug-CD system in improving both the complexing and solubilizing efficiencies of the CDs.

Celecoxib is the most widely prescribed COX-2 inhibitor. The poor aqueous solubility and wettability of celecoxib give rise to difficulties in the design of pharmaceutical formulations and lead to variable oral bioavailability. We have been working on the enhancement of solubility, dissolution rate and bioavailability of celecoxib through complexation with cyclodextrins [8]. In the present work, the effect of polyvinylpyrrolidone (PVP) on the complexation of celecoxib with ß- and hydroxypropyl-ß-cyclodextrins (HPßCD) was investigated. The effect of PVP on the solubilizing efficiency of cyclodextrins and dissolution of celecoxib from the CD complexes was also investigated.

Solubility studies were performed according to the method reported by Higuchi and Connors [9]. Excess drug (25 mg) was added to 15 ml of double distilled water (pH 6.8) containing various concentrations of ßCD or HPßCD (3-15 mM) in a series of 50 ml stoppered conical flasks, and the mixtures were shaken for 72 h at room temperature (28°) on a rotary flask shaker. After equilibration, 2 ml aliquots were withdrawn at 1 h intervals and filtered immediately using 0.45 μ nylon disc filter. The filtered samples were diluted suitably and assayed for celecoxib at 254 nm against blanks prepared in the same concentration of ßCD or HPßCD in water so as to cancel any absorbance that may be exhibited by the cyclodextrin molecules. Shaking was continued until three consecutive estimations were the same. Phase solubility studies were conducted in each case with and without addition of PVP. PVP was added at a concentration of 0.5% w/v to the solution containing CDs. The solubility experiments were conducted in triplicate.

Solid inclusion complexes of celecoxib-ßCD and celecoxib-HPßCD were prepared in 1:1 and 1:2 ratios by kneading method with and without the addition of PVP. PVP was added at a concentration of 10% w/w of the a mortar with a small volume of a solvent blend of water :methanol : dichloromethane (4:6:1). The thick slurry formed was kneaded for 45 min and then dried at 55°. The dried mass was powdered and sieved through mesh prepared to study the effect of PVP on the solubility and dissolution rate of celecoxib.

A UV spectrophotometric method based on the measurement of absorbance at 254 nm in water containing 1% sodium lauryl sulphate (SLS) was developed and used for the estimation of celecoxib. The method obeyed 2006 Beer’s law in the concentration range of 2-10 μg/ml. When a standard drug solution was assayed repeatedly (n = 6), the relative error (accuracy) and relative standard deviation (precision) were found to be 0.8% and 1.2% respectively.

Table 1: Effect of pvp on stability constant (Kc) and solubilizing efficiency of Cyclodextrins 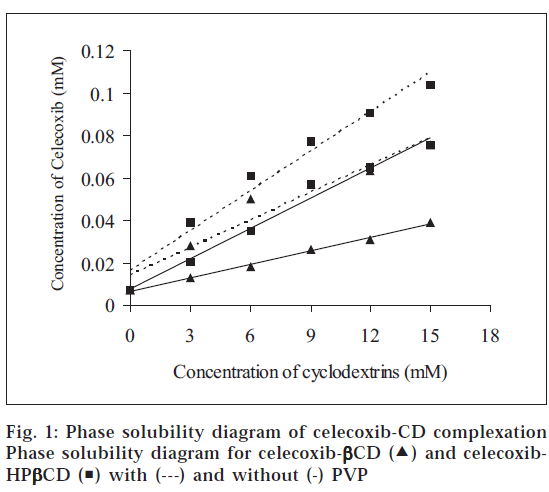 *Ratio between K1 of CD complex and K1 of celecoxib. T 50 is time taken for 50% dissolution; DE30 is dissolution efficiency up to 30 min; and K1 is first order dissolution rate constant 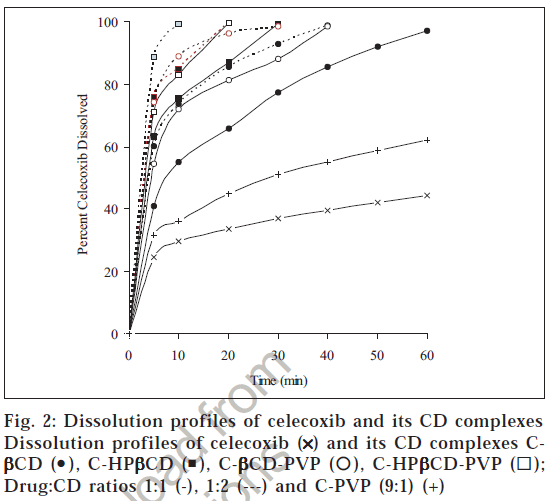 All CD complexes exhibited higher rates of dissolution and dissolution efficiency values than celecoxib and celecoxib-PVP (9:1) system, indicating more rapid and higher dissolution of celecoxib from its CD complexes. The K1 and DE30 values increased as the proportion of CD in the complex was increased. The increase in K1 (folds) with various CD systems is shown in Table 2.

Thus, the results of the study indicated the formation of celecoxib-ßCD and celecoxib-HPßCD inclusion complexes at a 1:1 M ratio in solution both in the presence and absence of PVP. The complexes formed are quite stable. The solubility and dissolution rate of celecoxib were markedly enhanced by complexation with ßCD and HPßCD, and addition of PVP resulted in higher complexation efficiency and markedly enhanced the solubilizing efficiency of ßCD and HPßCD. Thus, addition of PVP, a water-soluble polymer, could be a strategy that can be employed to improve the usefulness of cyclodextrins.

One of the authors (SVS) is grateful to CSIR, New Delhi, for the award of CSIR-SRF to work on cyclodextrin complexation for enhancing dissolution and bioavailability.