Floating microspheres are gastroretentive drug delivery systems based on nonefferevescent approach [1]. Floating microspheres are in strict sense, spherical empty particles without core. These are free flowing particles; size ranging between 1 to 1000 µm. Kawashima et al. [2] had developed noneffervescent hollow polycarbonate microspheres by using an emulsion solvent diffusion technique. This gastrointestinal transit-controlled preparation is designed to float on gastric juice with a specific density of less than 1. This property results in delayed transit through the stomach. The drug is released slowly at desired rate resulting in increased gastric retention with reduced fluctuations in plasma drug concentration.

Ethyl cellulose (EC) and various types of Eudragit® are the most commonly used polymers for the preparation of the floating microspheres by emulsion solvent diffusion technique. The drug release from the microspheres consists of only EC or Eudragit® is very less [3,4]. According to Lee et al. [5], many drugs are not released in significant amount from these microparticles at the pH of gastric fluids. So there is a need of some hydrophilic polymers to be added into the formulation. These polymers cause rapid ingress of the dissolution medium into the microspheres facilitating more drug releases.

Srivastava et al. [6] prepared microspheres using a gradually increasing EC concentration in combination with a fixed concentration of hydroxypropyl methylcellulose (HPMC) to assess the effect of polymer concentration on the size of microspheres and found that mean particle size of the microspheres significantly increased with increasing EC. Baykara and Kiliçarslan, have studied the effect of the drug-to-polymer ratio on the properties of verapamil hydrochloride loaded microspheres. They found that the drug dissolution profile could be slowed down by increasing polymer amount in the formulations, and that particle size, surface characteristics of microspheres, and dissolution rate of verapamil hydrochloride could be modified through the variation of drug-to-polymer ratio [7].

The objective of the present investigation was to study the effect of the various polymers as release modifiers and their concentrations on the drug release and other physicochemical properties of the floating microspheres. The polymers employed in the preparation of the floating microspheres were EC, Eudragit® RS and Eudragit® RL. The release modifiers employed in the study were HPMC K4M, HPMC E50 LV and Eudragit® EPO.

Simvastatin was selected as a model drug for the preparation of the microspheres. It is a HMG-CoA reductase inhibitor used extensively in the treatment of hyperlipidemia. It is administered in the form of tablet on once a daily basis having systemic bioavailability of only 5%. It is having short half-life of only 2 h and hence necessitate frequent administration [8]. Floating drug delivery system will be able to prolong the gastric retention of microspheres, thereby improving oral bioavailability of simvastatin.

The floating microspheres were prepared by emulsion solvent diffusion technique [1]. Weighed amount of polymers (Table 1) were dissolved in 15 ml of dichloromethane:methanol mixture (1:1). Drug was then added to polymer solution and mixed for 15 min. This solution was added in a thin stream to 200 ml aqueous 0.75% polyvinyl alcohol containing 0.02% v/v of Tween 80, while stirring using a mechanical stirrer (Dolphin, Mumbai, India). Stirring was continued for 2 h at 500 rpm at room temperature until solvents evaporated completely. The formulated microspheres were filtered by using filter paper. The residual solvent was washed 4-5 times with 50 ml portions of distilled water. The product was dried overnight at temperature of 45°.

Table 1: Formulation Showing Various Proportions of the Drug and Polymers

Predetermined amount of microspheres (25 mg) containing drug was dissolved in methanol (25 ml) by ultrasonication (Model USB 40, Spectralab, India). The solution was filtered through 0.45 µm Whatman filter paper and 0.5 ml was transferred to 10 ml volumetric flask. The volume was made up to the mark with methanol. Absorbance was determined by UV spectrophotometer (Shimadzu, V-1800, Japan) and the drug content was calculated according to the equation, % drug content=(weight of drug in microspheres/weight of microspheres recovered)×100...(2). The percentage entrapment efficiency (%EE) was calculated by the equation, %EE=(calculated drug concentration/theoretical drug content)×100...(3).

The particle size is measured using an optical microscope (LM-52-1704, Lawrence and Mayo, India), and the mean particle size is calculated by measuring 200-300 particles with the help of a calibrated ocular micrometer. The average particle size of the microspheres was expressed as diameter.

The microspheres were characterised for micromeritics such as tapped density, angle of repose (?) and compressibility index [9].

Compressibility index has been proposed as an indirect measure of bulk density, size and shape, surface area, moisture content and cohesiveness of materials. The following formula was used to calculate compressibility index: %Compressibility index=(1-(V/V0))×100...(5), where V and V0 are the volumes of the sample after and before the standard tapping, respectively.

The angle of repose has been used to characterize the flow properties of solids. Angle of repose of simvastatin microspheres was determined by fixed funnel method. The powder was poured from a funnel on vibration free base. The powder was poured with help of a spatula until a hip of particular height was formed. The angle of repose was determined by measuring the height and diameter of the cone of powder and calculated from the following equation, tan ?=h/r...(6), where, h is the height of heap of powder and r is the radius of the base of the powder cone.

Thermal analysis was performed using a differential scanning calorimeter (differential scanning calorimetry (DSC) 1, Stare System, Mettler Toledo, USA) equipped with a computerized data station. The sample of pure drug, physical mixture of drug and polymers, mixture of polymers and microspheres were weighed and heated at a scanning rate of 10°/min between 40 and 200° and 40 ml/min of nitrogen flow with an empty aluminium crucible as reference pan.

The floating microspheres were prepared by emulsion solvent diffusion technique as shown in Table 1 [1]. Water insoluble polymers show higher solubility in dichloromethane than methanol. However, methanol has higher solubility in water. As soon as the polymer solution was added to the aqueous medium, the methanol diffuses rapidly from the droplets of the polymer solution. Simultaneous diffusion of water inside the sphere further decreased the methanol concentration, and hence the polymer precipitated resulting in the formation of microspheres. Dichloromethane remaining as the central core diffused slowly due to its low water solubility. Due to the poor miscibility, water could not effectively invade the dichloromethane rich core. Therefore, the diffusion of dichloromethane began late, after the initial solidification, and formed a central hollow structure. During the diffusion of the solvents, the polymer was pulled outward as a result of the dragging force of the solvents and thus the central void space emerged. The central cavity produced by the solvents was gradually filled with water due to the reduced internal pressure. Water escaped out of the cavity during the drying process ultimately forming hollow microspheres [11]. The microspheres were formed when prepared with EC, but the microspheres were not formed with the batches F29 and F30 containing, Eudragit® RS and Eudragit® RL, respectively with the given experimental condition. This could be due to inability of the polymers to form a film leading to formation of nonfloating particles. The % buoyancies of the microspheres were found to decrease with an increase in the HPMC or Eudragit® EPO concentration (Table 3). This may be due to rapid penetration of the dissolution medium in the microspheres, as HPMC is water swellable polymer and Eudragit® is soluble in dissolution medium pH 1.2. The maximum decrease in the buoyancy with an increase in the polymer concentration was found with the Eudragit® EPO (drug: polymer; 1:1), which is 15.10±6.98%; this may be due to the rapid ingress of the dissolution medium into the microspheres due to rapid dissolution of the Eudragit® EPO creating more porous structure. The buoyancies were found to be higher with high polymer concentration; highest 96.22±2.13% with drug-to-polymer ratio (1:3) and lowest 15.10±6.98% with drug-to-polymer ratio (1:1). HPMC K4M having high viscosity form a strong barrier to the ingress of dissolution medium, hence have higher percentage of buoyancies than that of HPMC E50 LV. The buoyancy decreases with time as the drug diffused out from the microspheres, small pores were formed in the system which allowed surrounding medium to enter and fill up the void spaces, thereby increasing weight [12].

In order to determine the physical state of the drug in the microspheres the DSC study was carried out. DSC thermogram of the pure drug and microspheres formulation are shown in fig. 4. DSC thermogram of pure simvastatin exhibited a single sharp endothermic peak at 139° corresponding to its melting transition temperature (fig. 4a). This peak was also observed in the thermogram of the physical mixture of simvastatin and polymer, which is broadened; less intense as compared to simvastatin alone and shifted slightly (fig. 4c). This may be possibly due to fact that presence of EC and HPMC in the physical mixture depresses the intensity of endothermic peak of simvastatin, broadens its melting point and was uniformly dispersed at the molecular level in the microspheres. 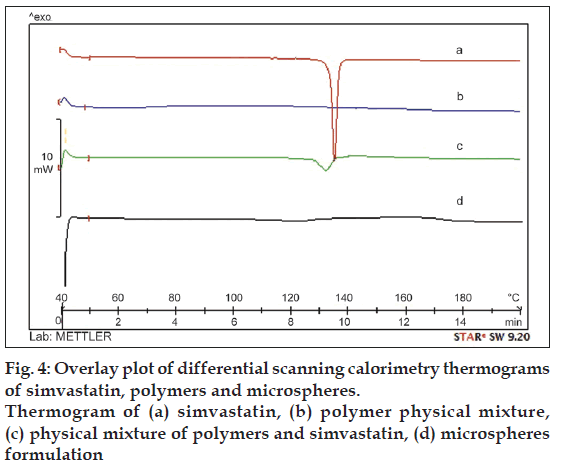 The authors wish to thank to All India Council of Technical Education (AICTE), New Delhi, for financial support. The authors gratefully acknowledge Alkem Pharmaceuticals Ltd., Mumbai and Signet Chemical Corporation Pvt. Ltd., Mumbai, for providing the drug and the polymers as a gift samples.