This study was aimed to investigate the effects of cream containing Ficus carica L. fruit ([Figure 1]) extract on various skin parameters such as skin melanin, erythema, moisture content, trans-epidermal water loss and sebum. For this purpose, formulation with 4% concentrated extract of F. carica fruit and base without extract were developed. Base served as a control. Both base and formulation were applied to the cheeks of human volunteers for 8 weeks to investigate the effects on different skin parameters using non-invasive bioengineering instruments. Formulation decreased the skin melanin, trans-epidermal water loss and skin sebum significantly. Formulation increased the skin hydration significantly and insignificant effects on skin erythema. We concluded that a stable topical cream (w/o emulsion) containing F. carica fruit extract have effects on skin melanin, trans-epidermal loss, hydration values and sebum content and possibly could be used against for hyper pigmentation, acne, freckles and wrinkle.

In the history of foods the fig is the earliest fruits to be desiccated and stored by men [1]. Ficus carica contain two main groups of phenolic compounds; phenolic acids (e.g. gallic acid, chlorogenic acid, syringic acid) and flavonoids (e.g. catechins, epicatechins, anthocyanins) [2]. F.caricais used in the treatment of diabetes, skin, diarrhea, ulcer, fever, asthma, epilepsy and insanity. Natural products contain biologically active compounds and are used in the modern phytocosmetics [3]. In recent years phenolics have gained considerable attention due to their use in skin care; such as dryness, eczema, acne, free‑radical scavenging, antiinflammatory, antiaging and skin protection effects [4]. No studies have been confirmed to evaluate the effects of fig on skin. The purpose of the present work was to investigate the effects of cream containing F. carica fruit extract on various skin parameters.

Fig fruits were shade dried and grounded. Methanol (80%) was used as hydroalcoholic solution for socking. Two hundreds grams of grounded F. carica fruit was socked in 80% methanol in a glass beaker for three days. Beaker was sealed with aluminum foil and kept in laboratory. Beaker was shaken for 10 min on each day. For coarse filtration, soaked material was filtered through several layers of muslin cloth. This coarse filtrate was then filtered through a Whatman # 01 filter paper.

Using a rotary vacuum evaporator, the above filtrate was evaporated at 40o under reduced pressure until the concentrate was reduced to 1/3rd of initial volume. Dark brown colored extract with residues was obtained. The extract, which obtained was then again filtered through a Whatman # 01 filter paper to remove residues. Final extract obtained was dark in color and it was stored in freezer [5].

Oily phase was prepared by heating 14% paraffin oil and 3% ABIL EM90 to 75±1o. At the same time, aqueous phase was heated to the same temperature. Then aqueous phase with 4% F. carica fruit extract was added to the oily phase drop by drop with continued stirring at 2000 rpm in a mechanical mixer for 15 min until complete aqueous phase was added. During this stirring time, 2‑3 drops of fragrance were added to give good fragrance to the cream. After continuous stirring of 15 min at 2000 rpm, the speed of the mixer was reduced to 1000 rpm for a period of 5 min for homogenization. The speed of the mixer was then further reduced to 500 rpm for further 5 min until the cream cooled at room temperature. The same method was used to prepare base without extract.

Eleven Asian and healthy males with an age between 20 to 35 years [5], with no known dermatological diseases or allergy to substances in topical formulations, joined in the single blinded and comparison study, in accordance with Declaration of Helsinki. Informed consent was signed before start of this study from all volunteers. The volunteers were asked not to apply any topical products on cheeks 24 h before the start of and throughout the test period. Approval for this study was obtained from the Board of Studies and the Institutional Ethical Committee, Faculty of Pharmacy and Alternative Medicine, the Islamia University of Bahawalpur, Bahawalpur‑Pakistan.

Non‑invasive bioengineering measurements were performed. The melanin and erythema measurements (EI) were performed using a reflectance spectrophotometer, Mexameter. The trans‑epidermal water loss (TEWL) was measured using a Tewameter MPA 5; the water content of the stratumcorneum with a Corneometer MPA 5 and the sebum level with a photometric device, Sebumeter MPA 5 manufactured by Courage and Khazaka Electronics GmbH, Cologne, Germany. All the instruments were calibrated according to guidelines of manufacturer. All measurements were made in a draught‑free room, with controlled temperature (18.0–20.6°) and relative humidity (50– 65%).

For primary irritation potential of base and formulation, patch tests were completed on both forearms of each volunteer on the first day of skin evaluation. A 5×4 cm area was marked on the forearms. The patch (bandage disc) for the left and right forearm was dowsed with 1.0 g of base and formulation respectively with surgical dressing after application on marked areas. The patches were removed after 48 h and the forearms were observed for any skin irritation by an experienced dermatologist and also using Mexameter. In vivo investigations have been carried out during the winter months (Feb‑Apr 2012). Two weeks before the study began and during the treatment period, the volunteers permitted only the use of normal cleansing products. Each volunteer was then distributed two creams, formulation containing the plant extract and base without the extract. The volunteers were well‑informed about the correct use of the creams. Measurement were taken on 1, 2, 3, 4, 6 and 8th week. Approximately, 500 mg of both formulation and base were instructed to apply to the cheeks twice daily (mornings, 7:00–9:00; evenings, 19:00–21:00) over 8‑week period at home by the volunteers. The area around the eyes was omitted. Before all measurements, volunteers remained in the experimental room for at least 15 min in order to tolerate skin adjustment to room temperature. Effectiveness of the two products [7], that is, formulation and the base were evaluated in this study using a questionnaire consisting of evaluation of seven parameters, ease of application, spreadability, sense immediately after application, sense on long term application, irritation, shine on skin and sense on softness after 8 weeks of application of products from the start of the study.

The skin melanin, erythema, TEWL, hydration and sebum values of the right and left cheek of the volunteers were calculated at zero hour, 1st, 2nd, 3rd, 4th, 6th and 8th week. SPSS 17.0 was used for data analysis on the computer by using the two‑way ANOVA for variation between different time intervals and the paired sample t‑test for the variation between the two creams. The level of significance was set P<0.05.

It was found by performing patch testing on forearms of volunteers for 48 h for both base and formulation that application of base or formulation had no effects after 48 h. But with paired sample t‑test it was evident that the effects of formulation and base were insignificant regarding the skin erythema.

Patch testing after a single application is a widely used procedure to evaluate acute irritant reactions [9]. Neither erythema nor edema after the application of base and formulation were examined. Slight variations were found in skin melanin values after the application ofbase, but in the case of formulation, there was continuous decrease in skin melanin content throughout the study period (fig. 1). With the help of ANOVA test, it was found that changes in skin melanin values produced by base was insignificant and by formulation was significant with respect to time. By applying paired sample t‑test, it was found that formulation produced significant (P≤0.05) effects with respect to base. Melanins are pigmented biopolymers that impart skin topology and tan synthesized by dentritic melanocytes dispersed at dermo‑epidermal junction. Tyrosinase is the key responsible enzyme for synthesis of melanins [10]. The reason is that F. carica contains tyrosinase inhibitors, which have skin depigmenting effects. The decline in skin melanin can be credited to the catechins and gallic acid present informulation. 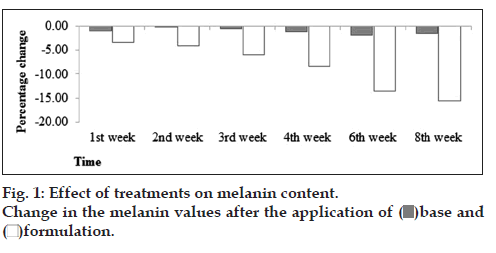 Figure 1: Effect of treatments on melanin content. Change in the melanin values after the application of (

There was slightly decrease in erythema values after application of base and formulation till 8th week (fig. 2). No significant effects were observed after applied two way ANOVA and paired sample t‑ test. So we can say that formulation has no effects on skin erythema content. 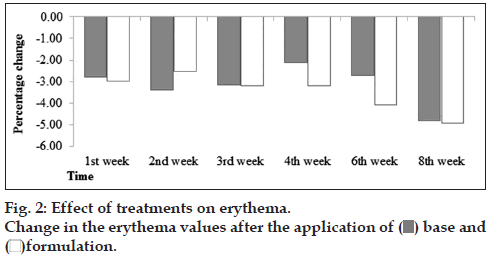 Figure 2: Effect of treatments on erythema. Change in the erythema values after the application of ( 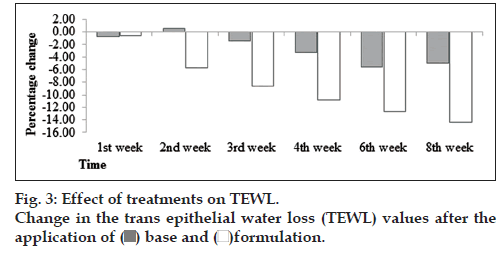 Figure 3: Effect of treatments on TEWL. Change in the trans epithelial water loss (TEWL) values after the application of ( 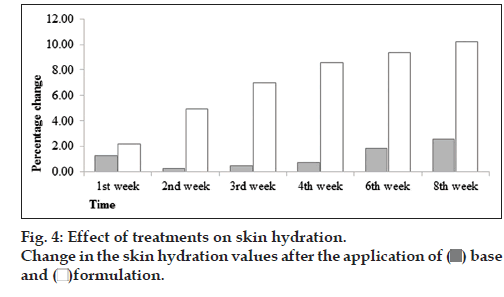 Decrease in TEWL in formulation is due to presence of antioxidants and phenolic compounds in fig extract. The binding of water in the Stratum corneum can become compromised. In this case, it is beneficial to lower the trans‑epidermal water loss by spreading over occlusive films [13]. Vitamin C is known to stimulate and enhance the rate of collagen biosynthesis in the dermis and because of increase in collagen synthesis, hydration level of the dermis recover. Fig fruit is an excellent source of ascorbic acid (vitamin C). F. carica L. contains a high level of antioxidant compounds, for example vitamin C, phenolic compounds (allergic acid) anthocyanins and carotenoids (carotene and lycopene) [14]. 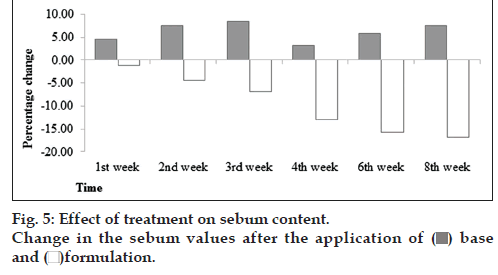 Figure 5: Effect of treatment on sebum content. Change in the sebum values after the application of (

It is reported that sebum secreted by sebaceous glands is coordinated by estrogens and androgens (sex hormones), corticosteroids (hormones of the adrenal cortex) and others. Androgens receptors and 5α‑reductase converts testosterone into dihydrotestosterone (the most active form stimulating sebum secretion). It has been reported that androgens receptors are present in various parts of skin areas. The reasons behind to increase the sebum secretion are: (1) dihydrotestotesterone DHT is a testosterone metabolite synthesized with the use of 5α‑reductase type I (2) progesterone is an inhibitor of 5α‑reductase. This hormone increases seborrhea by stimulating the division of sebocytes and (3) estrogen causes reduction in sebum secretion [15]. Myricetin, quercetin, kampeferol, gallic acid, syringic acid, and rutin [16] have been identified in fig. Inhibitory activity of 5‑α‑reductase of these compounds lead to reduced sebum content when applied.

From this study, we concluded that a stable topical cream (w/o emulsion) containing F. carica fruit extract have effects on skin melanin, trans‑epidermal loss, hydration values and sebum content. A targeted study need to be conducted in future in people with acne, freckles and wrinkles so that the actual activity of this very plant against these disorders can be explored scientifically.

The authors wish to thank the moral support given by the Chairman and Dean of the Faculty of Pharmacy and Alternative Medicine, The Islamia University of Bahawalpur, Bahawalpur, Pakistan.