Effects of Valsartan in Combination with Febuxostat on Serum Uric Acid, high-sensitivity C-reactive protein and Cardiac Function of Patients with Chronic Kidney Disease Plus Hyperuricemia

We aimed to evaluate the effects of valsartan in combination with febuxostat on serum uric acid, highsensitivity C-reactive protein and cardiac function of patients with chronic kidney disease plus hyperuricemia (HUA). A total of 144 patients with chronic kidney disease and hyperuricemia treated from June 2014 to June 2018 were retrospectively analyzed. They were divided into group A and group B according to treatment regimen. Both groups were given high-quality low-protein diet, and comprehensive treatments such as decrease of blood pressure, correction of anemia, supplementation of α-ketoacid, and correction of water, electrolyte and acid-base balances. Group A was administered 80 mg/d valsartan, based on which group B was given 40 mg/d febuxostat. Serum uric acid and high-sensitivity C-reactive protein levels were measured on the 2nd day after enrollment and after 2 mo of treatment, respectively. Echocardiographic examination was conducted. Before treatment, the two groups had similar serum levels of uric acid and high-sensitivity C-reactive protein (p>0.05). After treatment, such levels significantly decreased (p<0.05), and the levels of group B were significantly lower than those of group A (p<0.05). The two groups had similar cardiac function indices, including left anterior descending artery, left ventricular end diastolic diameter, thickness of inter ventricular septum, thickness of left ventricular posterior wall, left ventricular end-diastolic volume, left ventricular end-systolic volume, ejection fraction and fraction shortening (p>0.05). After treatment left atrial diameter, left ventricular end diastolic diameter, left ventricular enddiastolic volume and left ventricular end-systolic volume significantly reduced, and ejection fraction and fraction shortening significantly increased (p<0.05), with the changes of group B being more obvious. Febuxostat can relieve the microinflammatory status of patients with chronic kidney disease complicated with hyperuricemia, and protect endothelial and cardiac functions, exerting more evident effects after being combined with valsartan.

Table 1: Serum Levels of Uric Acid and Hs-Crp Before and After Treatment

Table 2: Cardiac Function Indices Before and After Treatment 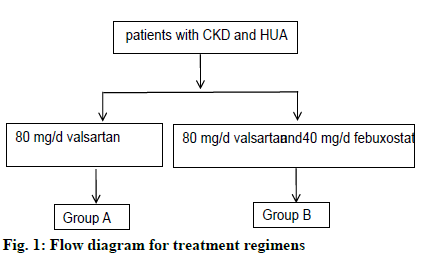 In summary, paying attention to HUA complicated by CKD patients and early intervention is important to protect vascular endothelial function and important target organ function, improve microinflammation in CKD patients, reduce the incidence of cardiovascular events, and delay further damage of renal function. The combination of angiotensin II receptor antagonist with febuxostat is expected to be an important clinical treatment for CKD with HUA.