Inflammatory bowel disease (IBD), a group of chronic and non-specific intestinal diseases including ulcerative colitis (UC) and Crohn’s disease (CD) is able to affect the entire digestive tract. It exhibits a yearly increasing incidence rate recently, but its pathogenesis remains unclear. IBD may have an association with environmental factors, genetic factors and immune disorders and the intestinal immune response is a vital player in the development, progression and treatment of IBD[1]. The nature of pathology of IBD is the injury of intestinal mucosa and repair of epithelial cells caused by massive inflammatory cells and factors in the intestine[2]. Toll-like receptors (TLRs) refer to cell transmembrane receptors and pathogen pattern recognition receptors in the innate immune system, which mainly mediate the interaction between microorganisms and cells and participate in inflammatory signal transduction. TLR4, a specific receptor for lipopolysaccharides (LPS), is capable of activating genes related to adaptive immunity[3]. As a downstream signal molecule of the TLR signaling pathway, myeloid differential factor 88 (MyD88) contains the TLR domain and functions as an adapter protein[4]. In the MyD88-dependent TLR4 signaling pathway, the pro-inflammatory factors [tumor necrosis factor-α (TNF-α) and interleukin 1β (IL-1β)] are released due to the activation of nuclear factor kappa B (NF-κB), and the inflammatory factors released further activate NF-κB, so the inflammation constantly amplifies and deepens and eventually develops into a cancer[5]. In many existing studies, the therapeutic effects of drugs on IBD are observed through the TLR4/MyD88/NF-κB signaling pathway. Shon et al.[6] found that Ido-1 downregulated the TLR/MyD88/NF-κB signaling pathway to alleviate dextran sodium sulfate (DSS)-induced colitis in mice. Vitamin D (VD3), a fat-soluble vitamin, is easily converted into VD3 under ultraviolet light, of which the active form is 1,25(OH)2D3. VD is involved in the calcium-phosphorus metabolism in the body and also binds to nuclear receptor VD receptor (VDR) to regulate the immune function[7]. Numerous studies have proved that VD3 affects the pathogenesis of IBD. Erben et al.[8] found that the 1,25(OH)2D3 level was lower in the mouse model of IBD and patients with IBD. Arihiro et al.[9] discovered that knocking out the VDR gene in mice induced IBD that was significantly mitigated after supplementing 1,25(OH)2D3. However, whether VD3 can alleviate IBD by regulating the TLR4/ MyD88/NF-κB signaling pathway is rarely reported. In this study, therefore, a rat model of IBD was established to probe into the ameliorating effect of VD3 on IBD in rats through the TLR/MyD88/NF-κB signaling pathway, hoping to provide experimental evidence for clinical treatment of IBD with VD3.

The weight, stool, diet, drinking and movement of rats were observed and recorded every day. All rats were killed under anesthesia at 7 d after modeling, and their colon specimens were collected and stored in liquid nitrogen.

The weight, stool viscosity, bloody stool and other conditions of rats were observed and recorded every day, based on which the DAI score was calculated (Table 1). DAI=weight loss score+stool viscosity score+bloody stool score[10].

HE staining and pathological scoring of colon tissues:

Frozen colon tissues were taken and prepared into paraffin sections after fixation and paraffin embedding. Then, the sections were deparaffinized with xylene, dehydrated with graded ethanol and stained with hematoxylin and eosin. Thereafter, the sections were gradiently dehydrated with ethanol, permeabilized with xylene and mounted with neutral balsam, followed by observation using a microscope (200×).

The colon tissues were pathologically scored[10]. Specifically, 5 fields of view were randomly selected for each section and scored according to the pathology scoring standards (Table 2).

Total RNAs were extracted from frozen colon tissues using TRIzol method and reversely transcribed into cDNAs with a reverse transcription kit. Next, with glyceraldehyde-3-phosphate dehydrogenase (GAPDH) as an internal reference, the amplification was performed using the SYBR Green method under the following conditions: 95° for 5 min, 95° for 20 s and 60° for 30 s for a total of 40 cycles. After that, the relative expression levels of TLR4, MyD88 and NF-κB were calculated using the 2-ΔΔCT formula.

The PCR primer sequences were as follows:

The blood was drawn from the abdominal aorta of rats and centrifuged at 4° and 3500 r/min for 5 min and then diluted as per the instructions of the ELISA kit and a standard curve was plotted. Next, the content of serum TNF-α, IL-1β, IL-6 and IL-10 in rats was detected.

SPSS 16.0 software was employed for statistical analysis, and GraphPad 5.01 software was adopted for plotting. The measurement data were expressed as (x?±s) and compared between groups using independent t test and among groups through single-factor analysis of variance. p<0.05 indicated that a difference was statistically significant.

The rats in Control group had glossy hair, constant weight gain and normal urination and defecation, as well as normal drinking, eating and movement. In Vehicle group, the rats had unsmooth and shaggy hair, weight loss, loose stools, decreased drinking, eating and movement from the 3rd d, bloody stools on the 4th d, and gross bloody stools on the 6th d, and the above conditions reached the peak on the 7th d. After intervention with VD3, the above conditions were improved in VD3 low group and VD3 high group compared with those in Vehicle group, with the most obvious improvement in rats in VD3 high group. On the 7th d, the weight of rats was (230.21±3.21) in Control group, showing an upward trend, and (171.18±3.83) in Vehicle group, (179.24±2.62) in VD3 low group and (191.65±2.17) in VD3 high group, displaying a downward tendency (p<0.05) (fig. 1). 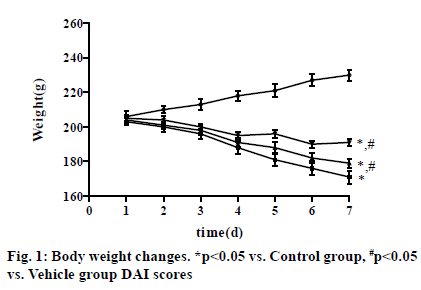 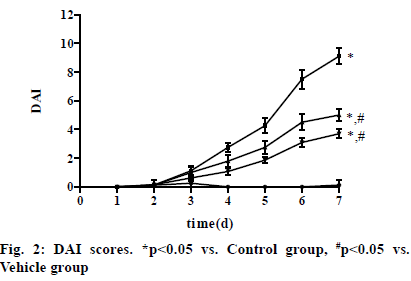 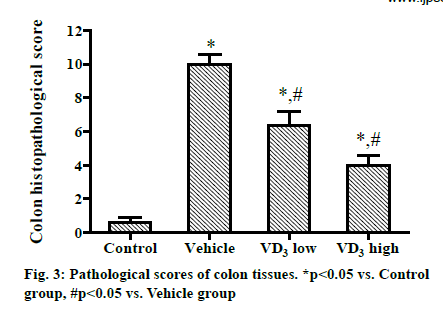 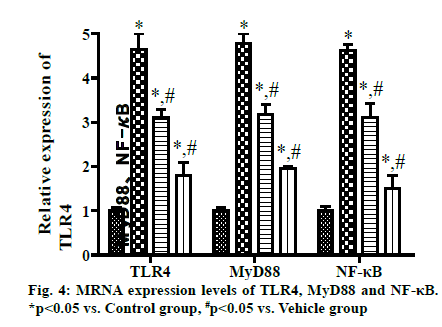 IBD is most often diagnosed in adolescents who have higher risks of extra-intestinal complications and malnutrition than adults[11]. Patients with IBD have varying degrees of VD deficiency, and the content of VD is negatively correlated with disease activity[12]. The rat model of DSS-induced colitis shows similar clinical manifestations and pathological and immunological changes to human IBD, i.e. both rat model of DSSinduced colitis and human IBD will have symptoms such as weight loss, loss of appetite, infiltration of inflammatory cells, diarrhea and hematochezia. Therefore, in this study, rats with DSS-induced colitis were selected as the research model.

In this study, the rats freely drank 3 % DSS solution for 7 d, and the pathological score in Vehicle group was increased. There was a significant difference in above index between Control group and Vehicle group, suggesting the successful establishment of the rat model of IBD, which is consistent with the results of previous studies[13,14]. Besides, IBD manifestations were also observed in VD3 low group and VD3 high group, but the severity was lower than that in Vehicle group, and a higher VD3 concentration indicated lower severity of IBD. These results indicate that VD3 can relieve the colonic inflammation in rats with DSS-induced colitis.

In IBD patients, endotoxins will be produced due to intestinal flora disorders and infections. LPS will activate the TLR signaling pathway, and TLRs will conduct signal transduction through the MyD88-dependent pathways after recognizing LPS. The activated MyD88 is capable of activating TNF receptor associated factor 6 (TRAF6) that binds to NF-κB inhibitor kinase inhibitor (IKK) to activate NF-κB. Activated NF-κB enters the nucleus from cells and activates the expression of related inflammatory genes[15,16]. For this reason, the TLR4/ MyD88/NF-κB signaling pathway is deemed as one of the pathogeneses of IBD. In this study, the results of qRT-PCR uncovered that the mRNA expression levels of TLR4, MyD88 and NF-κB were significantly higher in Vehicle group than those in Control group, whereas they declined after intervention with VD3, being in line with the results of previous research. It suggests that VD3 can alleviate the inflammatory response in rats through the TLR4/MyD88/NF-κB signaling pathway.

In conclusion, VD3 impedes the TLR4/MyD88/NF- κB signaling pathway and reduces the expression of downstream inflammatory factors to mitigate intestinal injury and colonic inflammation in IBD rats. However, in-depth studies should be carried out on the mechanism by which VD relieves IBD, because IBD has a complex pathogenesis and involves many inflammatory response pathways.

Weiwei Liu and Xueping Liu equally contributed to this work.