Ricin, a heterodimeric toxic protein (consisting of A‑ and B‑chain) is known to inhibit the synthesis of proteins in eukaryotic cells by cleaving a specific adenine residue from 28S rRNA presumably mediated by the N‑glycosidase activity of the A‑chain [1]. However, the potential use of ricin as an anticancer agent arising from its ability to arrest protein synthesis in eukaryotic cells is limited due to the nonselectivity of the B‑chain. Liposome has been used as delivery vehicle for delivery of ricin to cancer cells, but cytotoxicity of ricin reduced markedly following encapsulation into liposomes [2‑4]. It has been reported that free monensin significantly enhances the cytotoxicity of ricin encapsulated in liposomes in Chinese hamster ovary (CHO pro−) cells [4]. The enhancement of the cytotoxicity of liposomal ricin by free monensin was found to be significantly dependent on the lipid composition, charge and hydrophilicity on the surface of liposomes employed for the delivery of ricin [3]. However, monensin is a very hydrophobic molecule and this limits its administration in optimum doses under in vivo conditions in order to realise its full potential in the enhancement of toxicity of liposomal ricin. The development of a delivery system for this ionophore is, therefore, vital for exploitation of its role as potentiating agent under in vivo condition. Vasandani et al., for the first time reported that liposomes can be used as a delivery vehicle for monensin [5]. It has also been shown that liposomal monensin is very effective in enhancing the cytotoxicity of ricin in free form in mouse macrophage tumour cells [6] and under in vivo condition [5,7]. Subsequently, it has been reported by a number of investigators that liposomal monensin is very effective in enhancing the cytotoxicity of tumour cell specific immunotoxins for selective elimination of tumour cells [8‑10]. However, the relatively short half‑life of these liposomes was a major drawback for their limited use in vivo. To overcome this problem, new generations of liposomes, which have prolonged circulation time in the blood, have been developed. These liposomes are called stealth or sterically stabilised liposomes and are very stable in the circulation for prolonged period of time. It has been reported that the sterically stabilised liposomes of 70‑200 nm size containing 5‑7.5 mol% of distearoyl phosphatidylethanolamine-methoxy polyethylene glycol with chain length of 2000 (DSPE-mPEG-2000) exhibit maximum circulatory life [11]. It has been also reported that the surface modification of the liposome with PEG‑lipids of varying molecular weights of PEG (chain length) has prolonged circulation time in the blood by avoiding the uptake by liver and spleen [11‑13]. It has been reported by a number of investigators that the interaction of these liposomes with macrophages [12] and cancer cells [14,15] significantly influenced by the chain length of PEG. However, no work has been carried out so far to explore the efficacy of liposomal monensin on the enhancement of cytotoxicity of liposomal ricin. Therefore, attempts have been made during this investigation to intercalate monensin into various formulations of liposomes. The efficacy of monensin liposomes having different density and chain lengths of DSPE‑mPEG on the enhancement of fold potentiation of the cytotoxicity of liposomal ricin was studied in human epidermoid carcinoma (KB) cells. For this study, liposomes composed of soya phosphatidylcholine (SPC), cholesterol, phosphatidic acid (PA) and 5 mol% DSPE mPEG‑2000 are used for delivery of ricin, because the maximum enhancement of cytotoxicity of ricin by free monensin was observed in KB cells when ricin was delivered through this liposomal formulation [2].

Human KB cells were procured from National Centre for Cell Science, Pune, India and these cells were maintained in DMEM. The culture media were supplemented with 10% FCS, HEPES, NaHCO3, penicillin (100 units/ml) and streptomycin (100 mg/ml). Cells were then grown in a humidified incubator at 37°, 5% CO2 and 95% air atmosphere.

Purification and radioiodination of ricin

Ricin was purified from the seeds of Ricinus communis and radiolabelled with Na125I by lactoperoxidase according to the method reported earlier [16].

Liposomes composed of SPC, cholesterol, PA and DSPE‑mPEG‑2000 in a molar ratio of 40:45:10:5 were prepared by hand shaken method as described earlier [2]. Liposome size and zeta potential were determined using a Zeatasizer Nano ZS (ZEN 3600, Malvern Instruments, Worcestershire, UK) as presented in Table 1.

Intercalation of monensin in liposomes

Liposomes were prepared using the SPC and cholesterol in a molar ratio of 70:30 by hand shaken method. Briefly the lipids (total 50 μmol) were dissolved in chloroform and ethanol solution of monensin (10 mol% of the lipid mixture) was added to it in 100 ml round bottom flask. The organic solvent was evaporated to dryness in a rotary evaporator (Wheaton) at 37° under reduced pressure to obtain a homogeneous lipid film on the walls of the round bottom flask. The lipid film so obtained was desiccated for 1 h, followed by hydration with 1 ml PSB (20 mM, pH 7.4). The round bottom flask containing liposomes suspension was stored overnight (under N2 atmosphere to avoid lipid oxidation) at 4° for complete hydration. The following day, liposomes were sonicated in a bath type sonicator (Branson) at 25° for 30 min in 10 min intervals to avoid the heat generation.

The liposomes after sonication were extruded 10 times through 100 nm polycarbonate membrane. To prepare the negatively and positively charged monensin liposomes, 21 mol% either phosphatidic acid (PA) or sterylamine (SA) were added during the preparation of lipid film, respectively. Sterically stabilised liposomes intercalated with monensin were prepared exactly as described above only by adding various (1 to 7.5) mol% of DSPE‑mPEG of different chain lengths (1000, 2000, 3000 and 5000) during the preparation of lipid film. Liposomal monensin was separated from the free monensin by gel permeation chromatography using the Sepharose CL 6B column preequilibrated with phosphate buffer saline (PBS) (20 mM, pH 7.4) at 25°. Briefly, 1 ml liposomal suspension (50 mmol total lipids in 1 ml) was loaded on the Sepharose CL 6B column (1×43 cm). The column was eluted with PBS (20 mM, pH 7.4) at a flow rate of 15 ml/h. The recovery of liposomes and drug was measured by estimating phospholipids and monensin [5,17]. Liposome size and zeta potential were determined and are presented in Table 1.

In vitro cytotoxicity was assessed by [3H] leucine incorporation assay by established procedure in our laboratory [3]. Briefly, human nasopharyngeal carcinoma (KB) cells were plated in 24 well plates at a cell density of 8×105 cells/well in 1ml DMEM containing 10% FCS, penicillin (100 units/ml) and streptomycin (100 mg/ml), 24 h prior to the experiment. The monolayer cultures were washed twice with 1 ml DBSS and incubated in 0.9 ml serum free DMEM medium containing penicillin and streptomycin for 1 h at 37°. Cells were then incubated with different concentrations of ricin in free and different liposomal form for 4 h at 37°, followed by washing with DBSS twice and incubated with 0.9 ml leucine free medium for 1 h at 37°. After 1 h of pre‑incubation with leucine free medium, 100 ml [3H] leucine (0.5 mCi/ml) in RPMI‑1640 was added to the cells and the monolayer cultures were further incubated for 1 h at 37°. The monolayers were then fixed with 3% (w/v) perchloric acid and 0.5% (w/v) phosphotungstic acid twice, washed with DBSS twice and dissolved in 0.5 ml of 0.5 N NaOH. A 50 ml aliquot of the solubilised cell extract was transferred to a scintillation vial containing 5 ml scintillation cocktail, neutralized with 25 ml 1 N HCl and counted in Liquid Scintillation Analyser (Tri-Carb 2900TR, Perkin Elmer, USA). For the determination of the effect of monensin, cells were preincubated with monensin (50 nM) for 1 h, followed by incubation with ricin.

Cellular uptake of neutral conventional and various sterically stabilized liposomal formulations of monensin was assessed using NBD‑PC (1‑palmitoyl ‑2‑{12‑[(7‑nitro‑2‑1,3‑benzoxadiazol‑4‑yl)amino] lauroyl}‑sn‑glycero‑3‑phosphocholine) as fluorescent surface marker. Briefly, cells at a density of 8×105 cells/well/1 ml were plated in 24 well plates, 24 h before the experiment. The monolayer cultures were washed twice with DBSS and incubated with or without 50 nM monensin intercalated in liposomes containing 0‑7.5 mol% DSPE‑mPEG of different chain length (1000, 2000, 3000 and 5000) at a final lipid concentration of 20‑25 nM/ml for 1 h at 37°. Then, varying concentrations of liposomal ricin in 100 µl DBSS was added and cells were incubated at 37° for 4 h. Cells were then washed thrice with ice cold DBSS to remove unbound liposomes. The cells were fixed with 2% paraformaldehyde, detached by a brief trypsin‑EDTA (ethylenediaminetetraacetic acid) treatment and the fluorescence intensity in cells was analysed by fluorescence activated cell sorter (FACS Canto II, BD Bioscience, USA). Cellular uptake of the liposomal formulations was quantified on the basis of fluorescence intensity associated with the cells.

Fig 1: Effect of monensin on potentiation of the cytotoxicity of liposomal ricin and cellular uptake 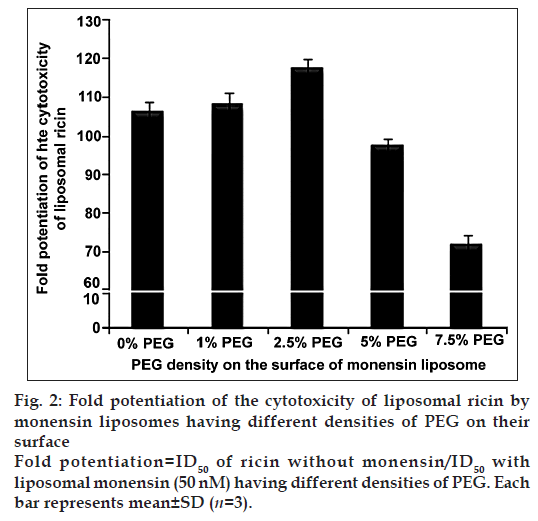 Fig 2: Fold potentiation of the cytotoxicity of liposomal ricin by monensin liposomes having different densities of PEG on their surface Fig 3: Cellular uptake of monensin liposomes having different densities of PEG on their surface. 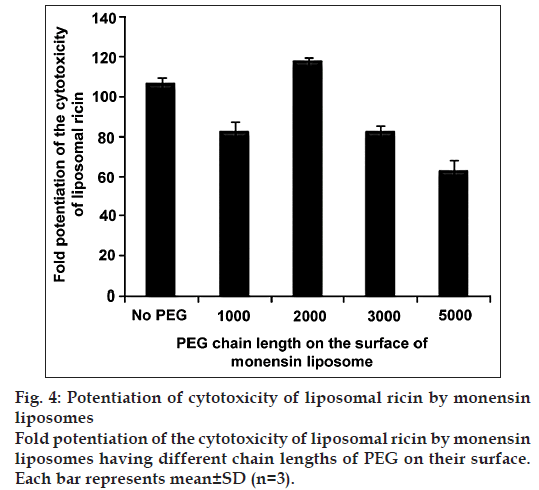 Fig 4: Potentiation of cytotoxicity of liposomal ricin by monensin liposomes Fig 5: Cellular uptake of monensin liposomes having different chain lengths of DSPE-mPEG on their surface.