According to the World Cancer Report issued by the International Agency for Research on Cancer (IARC, a part of the World Health Organization), cancer has been a major threat to public health in both developing and developed countries. About 7.60 million people died of cancer in 2008[1] and it is estimated that more than 11 million people will die of cancer in 2030 based on the current trend. Lung cancer is the most common primary lung malignant tumor with an increasing incidence and high mortality and the existing therapies of lung cancer include surgery, chemotherapy, radiotherapy, Traditional Chinese Medicine (TCM) therapy and molecular targeted therapy[2]. The treatment of early lung cancer is dominated by surgery. However, about 80 % of patients have been in middle advanced stage upon diagnosis. At this time, distant metastasis has occurred to cancer cells and chemotherapy is the best therapy, but chemotherapy will inhibit the bone marrow hematopoietic system and cause leucopenia and thrombocytopenia, making the body prone to accompanying infections and even death[3]. Meanwhile, radiotherapy is accompanied by many complications as well, showing bad effects on patients with advanced lung cancer and is not applicable to patients with poor constitution and older age. As a result, some Chinese herbal medicines derived from natural plants have become a research hotspot of lung cancer therapy in recent years, which present anti-tumor effects and no or little toxicity[4,5]. Astragalus Poly Saccharide (APS) is a polysaccharide component extracted from the Astragalus root and it is the main water-soluble active component. According to recent studies, APS has important anti-tumor effects[6]. This study aimed to investigate the effects of APS on the proliferation and apoptosis of adenocarcinomic human alveolar basal epithelial cells (A549 cells), so as to provide new ideas for the therapy of lung cancer.

Cells in the logarithmic phase were selected and cultured with high-glucose DMEM containing 10 % FBS, 100 U/ml penicillin and 0.1 mg/ml streptomycin at 37° and 5 % Carbon Dioxide (CO2). Besides, 0.25 % trypsin was applied for cell passage.

The stably passaged A549 cells were digested and the concentration of the cell suspension was adjusted to 1×104. The cells were inoculated into 96-well plates and 200 μl of culture medium was added to each well of each plate. 6 replicates were set for each concentration and the APS at the concentration of 0, 0.5, 1.0, 2.0, 4.0, 8.0 and 16.0 mg/ml were added to each well for reaction for 24, 48 and 72 h respectively. Next, 200 μl of MTT (5 mg/ml) was added to each well. After standing for 4 h, the cells were taken out, collected and centrifuged for 10 min at 1000 r/min. Then, the culture medium in the wells was sucked out carefully and 200 μl of Dimethyl Sulfoxide (DMSO) was added to each well. After shaking for 10 min, the absorbance of each well was detected at Optical Density (OD) 490 nm using an Enzyme Linked Immunosorbent Assay (ELISA) reader. Afterwards, the cell inhibition rate of each well was calculated as follows: Inhibition rate=[1-(mean OD490 value of wells in medication group-OD490 value of the zero adjustment well)/(mean OD490 value of wells in control group-OD490 value of the zero adjustment well)]×100 %. The assay was repeated for 3 times and the mean value was taken.

The stably growing A549 cells were conventionally digested, centrifuged, collected and counted and the cells were inoculated into a total of 6 wells on a 24- well plate at 1×104/well. When the cells reached 80 % confluence, a wound was scratched on the cells using a plastic pipette tip. Later, 3 wells were randomly selected as the experimental group, which were added with DMEM complete medium containing 4.0 mg/ ml APS, while the other 3 wells were used as control group. In control group, the cells were cultured in the conventional medium. After conventional culture in an incubator for 0 and 48 h respectively, the wound healing status in experimental group and control group at different time points was observed and the healing rate was calculated as follows: healing rate=(wound size at 0 h-wound size at 48 h)/wound size at 0 h ×100 %. The assay was repeated for 3 times and the mean value was taken.

A549 lung cancer cells were treated with APS at the concentration of 0, 2.0 and 4.0 mg/ml respectively and the cell migration ability at 48 h was detected in the Transwell chamber. Later, the cells in the middle and lower chambers of each group were collected and the number of migrating cells was counted under a microscope.

DMEM was used for dilution and preparation of Matrigel, and it was added to the 24-well Transwell chamber. A549 lung cancer cells were treated with APS at the concentration of 0, 2.0 and 4.0 mg/ml for 16 h respectively. Later, the cell invasion ability was detected in the Transwell chamber and the number of invasive cells was observed under a microscope.

A549 cells were treated with APS at the concentration of 0, 2.0 and 4.0 mg/ml for 24 h respectively and the protein expressions of SHP2, SOCS3 and Protein Inhibitor of Activated Stat 1 (PIAS1) were detected by Western blotting. After the collected cells were lysed and the protein concentration was determined, the loading buffer was added to the lysate, which was heated at 1000° and boiled for 10 min. Later, each well was loaded with 40 μg of proteins for electrophoresis, which was subjected to electrophoretic separation in 12 % Sodium Dodecyl Sulphate-Polyacrylamide Gel Electrophoresis (SDS-PAGE) gel. The voltage was set to 70 V during the electrophoretic separation of spacer gel and 120 V during the electrophoretic separation of separation gel. After separation, the proteins were transferred on to membranes at 275 mA for 60 min and then the Nitrocellulosee (NC) membranes were sealed with 5 % skim milk powder at room temperature for 1 h. After incubation with primary antibodies overnight and secondary antibodies at room temperature for 1 h, the membranes were washed for 3 times, followed by color development and imaging.

Statistical Package for the Social Sciences (SPSS) 26.0 software was utilized for statistical analysis, and the measurement data in line with normal distribution were expressed by mean±standard deviation. After variance analysis, Least significant difference test was performed for comparisons between groups, p<0.05 indicated that a difference was statistically significant. 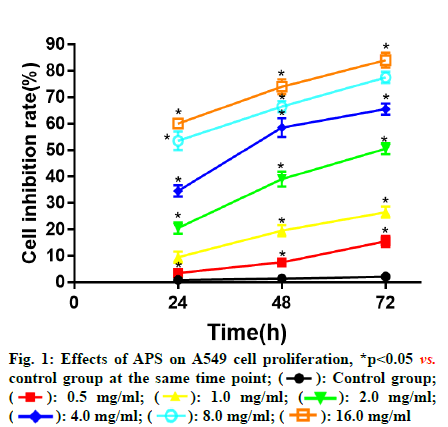 The wound healing speed of A549 cells was lower in ASP groups than that in control group. The cells in control group almost fully healed after 48 h, while the wounds in the APS groups remained unhealed at 48 h (fig. 2). 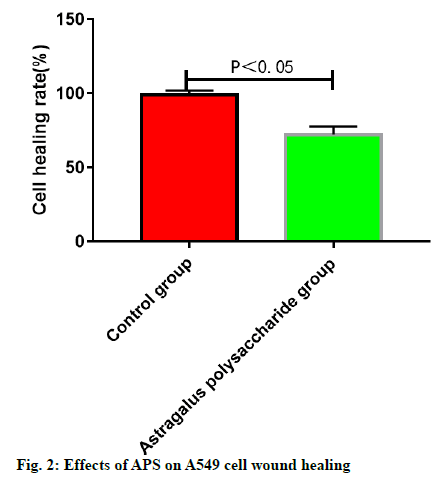 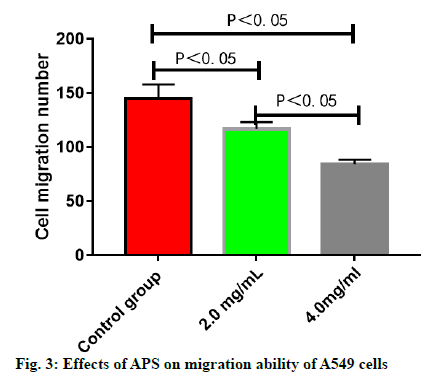 Fig. 3: Effects of APS on migration ability of A549 cells 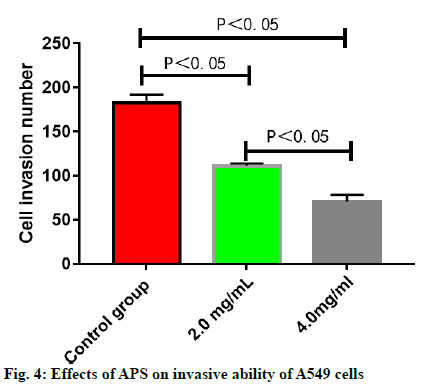 Fig. 4: Effects of APS on invasive ability of A549 cells

Lung cancer is one of the malignant tumors with high incidence and mortality in recent years, so it is particularly important to find out a chemotherapy drug that can efficiently kill and inhibit tumor cells while bringing no toxicity to normal cells or protecting normal cells[7]. With the continuous deepening of studies on modern pharmacology and the updating of extraction technologies of TCM, the anti-tumor mechanism of the effective components in traditional Chinese medicine has been clarified constantly. The TCM Astragalus membranaceus shows such broad pharmacological activities, and many studies have demonstrated that APS has significant anti-tumor effects[8,9]. The Janus kinase/signal transducers and activators of transcription (JAK/STAT) cell signaling pathway is a pathway where various cytokines perform intracellular and extracellular signaling. Multiple studies[10] have suggested that the JAK-STAT signaling pathway is widely involved in cell proliferation, differentiation and apoptosis, and the over-activation of the JAK-STAT cell signaling pathway is one of the main mechanisms causing neoplasia. However, there have been no relevant studies or reports on the effects of APS on the signaling pathway and its mechanism on lung cancer cells. For this reason, the inhibitory effects of APS on lung cancer cell proliferation were explored and analyzed in this study based on the regulatory mechanism of the JAK-STAT cell signaling pathway. The JAK-STAT cell signaling pathway is mainly regulated by three protein families and SHP2, SOCS3 and PIAS1, which are highly expressed in lung cancer cells, were analyzed in this study as the representative of each protein family.

The results of this study revealed that APS can inhibit the proliferation, migration and invasion of A549 lung cancer cells significantly and the effects are highly related to the concentration and action time of APS. After intervention with APS, the wound healing speed of A549 lung cancer cells was lower in APS groups than that in control group. The cells in control group almost fully healed after 48 h while the wounds in the APS groups remained unhealed at 48 h. It has been further proved that APS can inhibit the migration of A549 lung cancer cells effectively, which is similar to the results of other related study reports[11,12]. APS shows significant anti-tumor activities due to its effective inhibition of proliferation, migration and invasion of lung cancer cells. Moreover, the effects of APS on the JAK-STAT cell signaling pathway of lung cancer cells were analyzed. SHP2 is one of the negative regulatory proteins of the JAK-STAT cell signaling pathway induced by interleukin 6 (IL-6), but its specific molecular mechanism of action remains unclear. Scholars have verified that during the occurrence and development of liver cancer, SHP2 protein can inhibit the occurrence and development of liver cancer by dephosphorylation of signal transducer and activator of transcription 3 (STAT3)[13,14]. SOCS3, as one of the most important members of the suppressor of cytokine signaling (SOCS) protein family, as well as the most important inhibitory factor in the JAK-STAT cell signaling pathway, can be induced by multiple cytokines such as granulocyte colony-stimulating factor, erythropoietin and IL-6, and has a negative regulatory effect on the JAK-STAT cell signaling pathway[15]. According to the results of this study, after 549 cells were treated with APS at different concentrations, the relative protein expressions of SHP2 and SOCS3 rose significantly with the increase of the concentration of APS, indicating that the protein translation and expression of SHP2 and SOCS3 can be up-regulated after the intervention with APS on lung cancer cells, thus negatively regulating the JAK-STAT signaling pathway and inhibiting its over-activation, and thereby exerting the corresponding anti-tumor effects. PIAS is an inhibitor of activated STAT protein, which only inhibits the protein transcriptional activity of activated STAT, but has no inhibitory effect on other components of the JAK-STAT signaling pathway and the intracellular activated protein of the pathway[16-18], which was further verified in this study. The results of this study showed that intervention with APS had no significant effect on the relative protein expression of PIAS1.

Hanjiong Cai and Jianbiao Cao contributed equally to this study.