Phenacetin has been reported to be a reliable probe for the estimation of microsomal CYP1A2 activity. Phenacetin is converted to paracetamol by CYP1A2. A high pressure liquid chromatographic assay for the estimation of CYP1A2 activity in microsomes, was evaluated with caffeine as the internal standard. An RP C-18 supelcosil (150 × 4.6 mm, 5 µm) column was used for the assay. The mobile phase composition was acetonitrile:water (15:85), with a flow rate of 0.7 ml/min, injection volume of 100 µl, and detection at 240 nm. The retention times for paracetamol, caffeine and phenacetin were found to be 4.9, 8.6 and 15.5 min, respectively. The limit of detection was 0.1 µM for phenacetin, and the limit of quantitation was 0.2 µM for paracetamol. The percent coefficient of variation associated with paracetamol determination after duplicate estimation, was found to be in the range 0.02 to 7.7% for buffer matrix, and 0.8 to 9.7% for microsomal matrix. The mean rate of paracetamol formation in rat liver and guinea pig liver microsomes was 0.027 and 0.161 nmoles/min/nmole of P450, respectively. No interference was observed from incubation mixture components.

Cytochrome P450 (CYP) comprises of a superfamily of heme containing monooxygenases, that play an important role in biotransformation of numerous endogenous compounds and xenobiotics [1]. The CYP isoenzymes that are primarily responsible for hepatic drug metabolism are, CYP1A2, CYP2A6, CYP2B6, CYP2C9, CYP2C19, CYP2D6, CYP2E1 and CYP3A4 [2,3]. The relative levels of these CYP isoenzymes in liver microsomes can be determined by monitoring the biotransformation of suitable substrates (termed isoenzyme specific ‘probe’ substrates), that are selectively metabolized to specific metabolites by the individual CYP isoenzymes [4]. CYP1A2 is the predominant member of CYP1A subfamily and is responsible for the potential bioactivation of aromatic amines such as 2-acetylaminofluorine heterocyclic amines and aflatoxins [5]. CYP1A2 also plays an important role in the metabolism of phenacetin, caffeine, and theophylline, and these drugs are used as substrate probes to determine CYP1A2 activity [4]. HPLC assays for estimation of CYP1A2 activity in liver sub-cellular fractions and during in vivo studies have been reported previously6-8. We have evaluated one of the reported procedures with minor modifications, for the estimation of CYP1A2 activity under in-house conditions [6].

The standard curve for determination of CYP1A2 activity was developed in duplicate, in guinea pig liver microsomal matri and in 0.1 M phosphate buffer containing 0.001 M EDTA, pH 7.4 matrix. The sample preparation protocol for development of standard curve in microsomal matrix and buffer matrix is given in Tables 1 and 2, respectively. The sample work-up was done by using the following procedure. To each of the sample tubes, 250 μl of 0.6 M perchloric acid was added (for the precipitation of microsomal proteins). Following this, to each test tube, 50 μl of the internal standard (caffeine) was added, and then all samples were transferred into 1.5 ml capacity eppendorff tubes. The samples were centrifuged at 13000 × g for 10 min at 4°. The supernatant was separated and stored at –700 till HPLC analysis.

The abbreviations used are 4HA = paracetamol and 4EA = phenacetin. The buffer used was 0.1 M phosphate buffer containing 0.001 M EDTA, pH 7.4. All samples were prepared in duplicate.

The abbreviations used are 4HA = paracetamol and 4EA = phenacetin. The buffer used was 0.1 M phosphate buffer containing 0.001M EDTA, pH 7.4. All samples were prepared in duplicate.

The microsomal incubation conditions for CYP1A2 activity determination were adapted from reported procedures [11,12]. The incubations were conducted in a total volume of 0.5 ml of 0.1 M sodium phosphate buffer containing 0.001 M EDTA, pH 7.4, and contained 100 μl microsomes, phenacetin at a final concentration of 100 μM, and 0.6 mM NADPH. Incubations were initiated with addition of NADPH, and were performed at 37° for 30 min. After incubation, the reactions were stopped with 250 μl of 0.6 M perchloric acid, and the samples were processed as mentioned for the standard curve samples. Control incubations were also performed either without microsomes, or without phenacetin, in order to evaluate possible interference from incubation components.

HPLC analysis was done with minor modifications of the method reported previously [6]. Analysis was performed with a Jasco HPLC with PU-980 intelligent pump, equipped with a UV-975 detector and Jasco-Borwin software (version 1.5), with hercule-2000 interface. HPLC analysis was done on a RP C-18 supelcosil (150 × 4.6 mm, 5 μm) column. The mobile phase composition was acetonitrile:water (15:85% v/v), with a flow rate of 0.7 ml/ min, and detection at 240 nm. One hundred microlitres sample was injected onto the HPLC column for analysis. The standard (calibration) curve was plotted using area ratio of paracetamol to internal standard on the ordinate, and concentration of paracetamol on the abscissa.

Drug metabolism studies (in vitro, in vivo and/or in silico) are very important in the assessment of safety of pharmaceuticals, individualization of drug therapy, and prediction of drug-drug interactions [5,13-17]. The present study illustrates the evaluation of a HPLC assay to determine the isoenzyme specific activity of CYP1A2 in liver microsomal preparations, for drug metabolism studies. The conversion of phenacetin to paracetamol is selectively mediated by CYP1A2 [6]. The concentration of the substrate i.e., phenacetin used for determination of CYP1A2 activity in liver microsomes is 100 μM [7,8]. Since the concentration generally used for determination of the Vmax is five times the Km, the projected Km would be 20 μM. Further, considering ≤5% conversion [for adherence to Michaelis-Menten steady state assumptions] in the microsomal incubations [11,12], the maximum expected concentration of paracetamol at the end of incubation is 5 μM or 1 μM, if incubations are performed at Vmax or Km, conditions, respectively. Thus, a standard curve with range from 0.1 to 20 μM (0.1, 0.2, 0.5, 1, 2, 5 10 and 20 μM), should be sufficient for application of the assay for CYP1A2 activity determination and drug-drug interaction studies, that are performed either at saturating and non-saturating substrate concentrations, respectively.

The mean retention times for paracetamol, caffeine and phenacetin were found to 4.9, 8.6 and 15.5 min, respectively, under the stated HPLC conditions. A typical chromatogram in microsomal matrix is shown in Fig. 1. Phenacetin was included in the standard curve samples to evaluate potential effects on HPLC profile, since it would normally be present in microsomal incubation at high concentrations. Linear regression (Microsoft Excel XP) of the standard curve data in microsomal matrix, followed the equation Y=1.0163X, with an r2 of 0.9989. Linear regression (Microsoft Excel XP) of the standard curve, in buffer matrix, followed the equation Y=0.8567X with an r2 of 0.9964. The limit of detection (LOD) was 0.1 μM, and the limit of quantitation (LOQ) was 0.2 μM, in both matrices. The mean coefficient of variation associated with two assay experiments, each done in duplicate, was found to be in the range of 0.02 to 7.7% for buffer matrix, and 0.8 to 9.7% for microsomal matrix, respectively. The above results indicate that the CYP1A2 assay developed above, is suitable for routine drug metabolism research work. The buffer matrix was evaluated in this study, in order to avoid use of microsomes during preparation of standard curve, while performing CYP1A2 assay on a regular basis. Liver tissues are difficult to obtain and microsome- preparation is tedious, and as such, use of microsomes just as a matrix for standard curve preparation, is unwise.

The biotransformation of phenacetin to paracetamol was observed in both rat and guinea pig liver microsomes. Control incubations showed no production of paracetamol. The HPLC profile on incubation of phenacetin in microsomes is as shown in Fig. 1. No interference was observed from the incubation matrix components. The mean rate of paracetamol formation in rat liver and guinea pig liver microsomes was 0.027 and 0.161 nmole/min/nmole P450, respectively. These data indicate the utility of the developed assay for measurement of CYP1A2 activity in liver microsomal preparations. 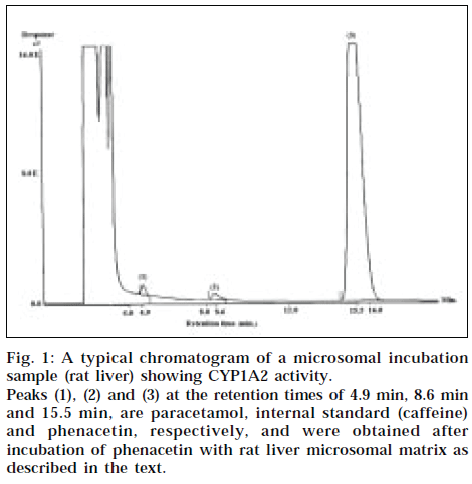 Figure 1: A typical chromatogram of a microsomal incubation sample (rat liver) showing CYP1A2 activity.
Peaks (1), (2) and (3) at the retention times of 4.9 min, 8.6 min and 15.5 min, are paracetamol, internal standard (caffeine) and phenacetin, respectively, and were obtained after incubation of phenacetin with rat liver microsomal matrix as described in the text.

The authors would like to extend special thanks to Dr. M. L. Kubal, Wockhardt Ltd., Aurangabad for providing HPLC columns used in this work and IPCA Laboratories for the gift sample of paracetamol. This work was conducted with the support of AICTE grant 8019/RDII/ R&D/PHA(213)/2001-02.