Fatigue is best defined as the status that the living body's physiological processes cannot continue its function at a particular level or the organs cannot keep their predetermined exercise intensity, and it can be divided into mental and physical fatigue [1]. Physical fatigue, or peripheral fatigue, is mainly manifested as decreased exercise capability, while mental fatigue is mainly manifested as negative changes in well and behavior, such as decreased attention, reduced ability to concentrate, mental malaise, forgetfulness, somnolence and dizziness [2]. It is known that physical fatigue is one of the important reasons for the performance of the body and often leads to premature aging, cancer, depression and other potential physical illnesses [3]. At present, there are a series of theories about physical fatigue mechanisms, such as exhaustion theory, blockage theory, catastrophe theory, protective suppression theory and free radical theory [4]. In recent years, free radical theory has attracted more and more attention, and antioxidants play an important role in delaying the degree of fatigue through the oxidation of inter or intra cellular oxidizable substrates [5]. Since the clinical drugs used to treat fatigue are not very effective, potential substitutes from natural ingredients are worth investigating. In fact, it has been reported that a variety of natural antioxidant components, such as flavonoids, polysaccharides, polypeptides, and saponins, are effective in preventing or delaying fatigue [6,7].

Ginseng, the dried root of Panax ginseng C. A. Mayer (Araliaceae), is one of the most widely used herbal medicines in many countries and regions of East Asia and Southeast Asia, and it is a tonic, restorative and antiaging agent in the Traditional Chinese Medicine [8]. Ginsenosides, a group of triterpenoids dammarane structure of saponins, are the most important bioactive ingredients in ginseng, which are considered to be responsible for the nutraceutical actions of ginseng [9]. Nearly 60 saponin compounds have been obtained from ginseng, including dammarane-type protopanoxadiol saponin, dammarane-type protopanaxatriol saponin, oleanane-type saponin, and other types of saponins [10]. The pharmacological effects of these ginsenosides are different, some of which even show the opposite effects [11]. Among these, ginsenoside Rg3 accounts for about 4.7 % of all saponins, which has been widely paid attention to due to its extensive pharmacological activities, such as antioxidant, antistress, anticancer, antidiabetic, antiinflammation, antinociceptive and antiangiogenic activities [12,13]. According to the different spatial positions of the groups attached to the C-20 position, ginsenoside Rg3 has two kinds of epimers, i.e. 20(R)-Rg3 and 20(S)-Rg3, and compared with the R form, the S form exhibits significantly higher antioxidant capacity [14]. In fact, strong antioxidants have been shown to reduce the severity of fatigue because they can relieve some peroxides by removing reactive oxygen species produced during exercise [15]. In addition, researchers have found that 20(R)-Rg3 had antifatigue effect on mice after intranasal administration, which could increase the storage of glycogen and reduce the accumulation of metabolites [16]. However, there are few studies on the antifatigue activity of 20(S)-Rg3. Therefore, the current study was designed to evaluate the antifatigue effects of 20(S)-Rg3 using forced swimming test in mice. The antifatigue mechanisms were also clarified by measuring related biochemical parameters, including blood lactic acid (BLA), serum urea nitrogen (SUN), tissue glycogen, serum antioxidant enzymes and malondialdehyde (MDA).

All experimental procedures involving animals were carried out in accordance with the Regulations on the Administration of Laboratory Animals of China (Order No. 2 of 1988 of National Science and Technology Commission of the People's Republic of China, promulgated on October 31, 1988). Male Kunming mice (18-22 g) were obtained from Sichuan Research Animal Center (Chengdu, China). The animals were fed under controlled environmental conditions of temperature (24±1°), humidity (55±5 %) and a 12 h light/dark cycle, and maintained on standard pellet diet and tap water ad libitum. This study was formally approved by the Animal Research Ethics Committee at Sichuan University (Chengdu, China).

After an adaptation period of one week, 40 mice were randomly divided into four groups, each consisting of eight (n=10) animals. The first group designated as control (C) group got physiological saline (1.0 ml), while the other three groups got 10, 20 and 40 mg/kg of 20(S)-Rg3, respectively and were accordingly designated as low-dose 20(S)-Rg3 (Rg3-L) group, moderate-dose 20(S)-Rg3 (Rg3-M) group and highdose 20(S)-Rg3 (Rg3-H) group. Treatments were administered by gavage once a day lasting for 28 d. 20(S)-Rg3 solutions were prepared through dissolving it in 1.0 ml physiological saline. The dose of 20(S)-Rg3 was based on a preliminary experiment.

After 28 d, forced swimming tests were performed as described previously by Xu and Zhang [17] and made slight adjustment. Briefly, after the last treatment, the mice rested for 30 min and then were placed in an acrylic plastic pool (90×60×60 cm), whose depth was 30 cm, and the water temperature were kept at 25±1°. Exhaustion was defined when the mice failed to ascend to the water surface for breathing within 7 s [18]. The exhaustive swimming time was used as an indicator of exercise endurance and antifatigue effects.

As soon as the forced swimming tests were finished, the mice were anaesthetized with ether and killed by decapitation. The blood samples were collected for the BLA determination, and serum was separated by centrifugation (1064×g, 15 min) at 4° for the determination of SUN. After the blood was collected, the liver and gastrocnemius muscle were immediately removed and homogenized in a cold 10 % KCl solution (10 ml/g tissue) using a homogenizer. The suspension was centrifuged (1064×g, 10 min) at 4° and clear supernatant was used for the determination of glycogen, SOD, GPx, CAT and MDA. The above biochemical parameters were determined using commercial kits according to the manufacturer’s recommended protocol.

All data are expressed as means±SD. Statistical analysis was performed using SPSS 16.0 software for one-way analysis of variance and then Duncan multi-range post hoc tests. P<0.05 was found to be statistically significant.

The forced swimming test is a commonly used experimental animal model to evaluate the potential antifatigue effect of the drug, because it is very effective in evaluating the exercise endurance of animals and has a highly repeatable result [19]. The exhaustive swimming time is directly related to the fatigue degree. As shown in Figure 1, compared with the C group (168.39±26.37 min), the exhaustive exercise times of the Rg3-L, Rg3-M and Rg3-H groups (203.56±21.89, 237.39±34.25, and 248.76±38.71 min) were significantly longer (p<0.05). These results revealed, 20(S)-Rg3 has obvious antifatigue effects. 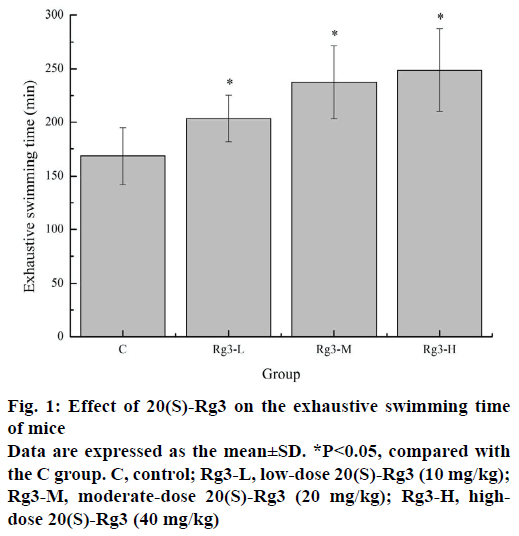 Lactic acid is the glycolysis product of carbohydrate under anaerobic conditions. Under normal circumstances, the production and removal of BLA is in a dynamic balance. Intensive exercise can be a critical point where BLA production increases beyond its removal rate, which can lead to various biochemical and physiological side effects of glycolysis, phosphofructokinase and muscle contraction caused by calcium release [20]. It has been confirmed that the increase in BLA and the resulting lactic acidosis in skeletal muscle during exercise are the main causes of muscle fatigue [21]. Urea nitrogen is a metabolite of protein and amino acids. SUN represents normal kidney function. However, there are many factors, such as protein decomposition, dehydration, stress, and fatigue, can lead to changes in SUN levels [3]. After intense exercise, when the body cannot get enough energy through sugar and fat catabolism, the SUN level will increase due to strong protein catabolism. Thus, the increased SUN usually reflects the decomposition of the protein, which will compromise the muscle's contraction strength and eventually lead to fatigue. As can be seen from Figure 2, the BLA levels of the Rg3-L, Rg3-M and Rg3-H groups (10.13±1.65, 9.27±1.03, and 8.56±1.21 mmol/ml) were significantly lower (p<0.05) than that of the C group (12.86±1.52 mmol/ml). Similarly, the SUN levels of the Rg3-M and Rg3-H groups (8.13±0.98, and 7.52±1.11 mmol/ml) were also significantly lower (p<0.05) than that of the C group (11.19±1.87 mmol/ml). These results indicated that 20(S)-Rg3 can effectively delay or reduce the production of BLA and reduce the energy of protein catabolism, which is an important reason for its delayed fatigue effect. 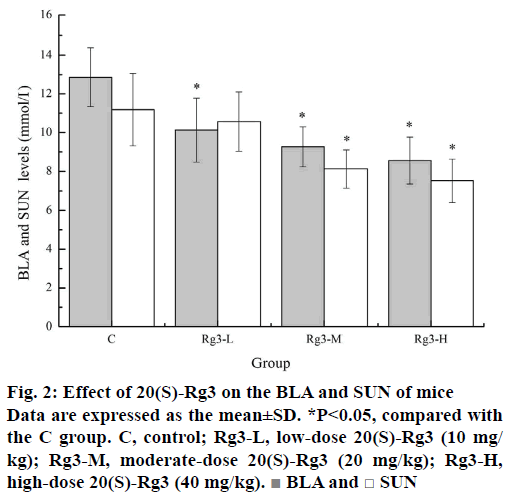 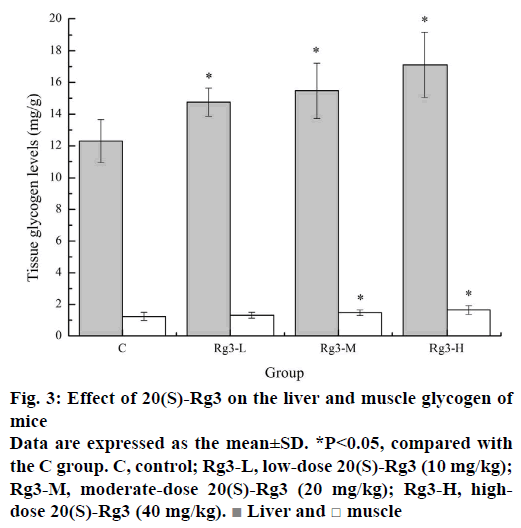 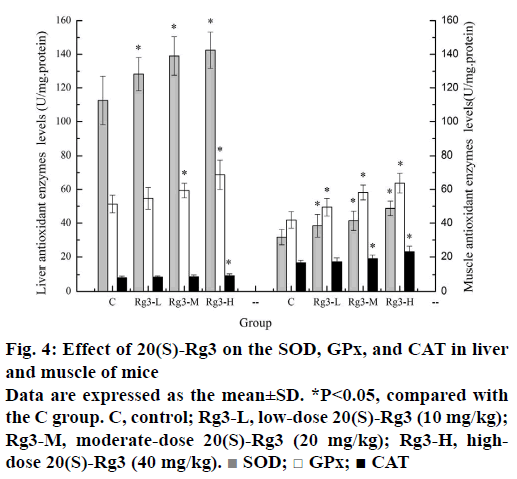 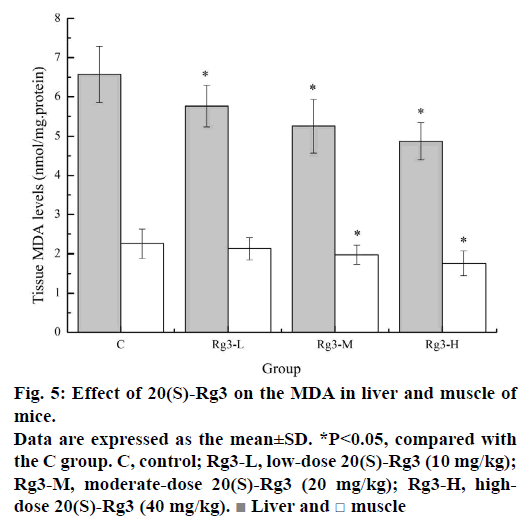 It can be concluded from the present study that 20(S)-Rg3 has antifatigue effects by enhancing the exhaustive exercise time of mice, and its antifatigue mechanisms involves the following factors: first, 20(S)-Rg3 eliminates the accumulation of metabolites by reducing BLA and SUN levels; second, 20(S)-Rg3 activates energy metabolism by increasing the glycogen levels in liver and muscle; third, 20(S)-Rg3 protects exercise-induced oxidative stress by increasing the levels of SOD, GPx, and CAT, as well as decreasing the MDA levels in liver and muscle of mice. Further research is needed to elucidate its antifatigue molecular mechanisms and antifatigue-associated genes, such as glucose transport protein 4 and AMP-activated protein kinase. The findings of this study provide convincing evidences that 20(S)-Rg3 can be an ergogenic and antifatigue agent for the athletes in exercise.

The work was supported by the Cross-Disciplinary Research Projects of Sichuan University of China (No. SKQY201618, and No.SKQY201617).

Authors declare that there are no conflicts of interest.