An era of antibiotics chemotherapy shows resistance to number of strains of microorganisms during disease treatment, so it is need to look for herbal immunomodulatory agents to treat infections. There is growing interest in identifying and characterizing natural compounds with immunomodulatory activity. Compounds like alkaloids, phenols, polysaccharides, lectins, peptide, flavonoids and tannin have been reported for its immunomodulatory activity [1].

Trichopus zeylanicus commonly known as “Arogyapachha” i.e. greener of health. It is a wild plant, a rare genus, small glabrous herb growing in Agasthyar hilly forest of Kerala, India and use of this plant as a health tonic and rejuvenator. This information is based on ethno-medico-botanical investigation [2]. Trichopus zeylanicus was reported for its adaptogenic [3] and immunomodulatory [3], aphrodisiac [4], hepatoprotective [5], antistress [6-8], antioxidant activities [9]. However, there is no experimental evidence presently available in literature with regards to its alkaloid fraction shows immunomodulatory activity. Hence, the present study has been carried out to investigate its immunomodulatory activity using alkaloid fraction from Trichopus zeylanicus Gaertn.

The plant Trichopus zeylanicus Gaertn, (Family: Trichopodaceae) subspecies travancorius was collected from Agasthyar hills of Kerala in the month of September 2008, and authenticated by taxonomist of NIPER nursery, Mohali, Chandigarh, India. A voucher specimen No.NIP-159 has been deposited at that institute.

The brownish solid mass (100 g) of crude methanol extract was dissolved in 10% acetic acid (500 ml). After shaking and filtering, the acidic solution was washed with chloroform (500 ml), its pH adjusted to 9 by addition of 25% ammonia, and rewashed with chloroform (1.2 l). The latter extract was dried over anhydrous disodium sulphate (Na2SO4) and after removal of the solvent crude alkaloid fraction (10 g, 1% w/w). This fraction is referred as alkaloid fraction of Trichopus zeylanicus (AFTZ), it was subjected to TLC using precoated silica gel G plates (F254) using a mixture of n-propanol:formic acid:water (9:0.1:0.9) as eluent and Dragendorff’s reagent for detection of alkaloids [10,11].

Male Swiss Albino mice (25-30 g) were selected for the study of immunomodulatory activity. The animals were obtained from the Department of Pharmacology, JKK Nattaraja College of Pharmacy, Komarapalyam. The animals were housed in well ventilated colony cages in the departmental animal house at (25±2°, 12:12 h L:D (Light and Dark) cycle). The animals were fed with standard rodent pellet diet and water ad libitum. All the experimental procedure and protocols used in the study were approved by IAEC of JKK Nattaraja College of Pharmacy, Komarapalyam, and as per CPCSEA (887/ ac/05/CPCSEA) guidelines.

Acute toxicity assay was performed as per OECD guidelines 423 (limit test). Six female Wistar albino rats (three animals in each step) were randomly selected. The animals were kept fasting for overnight providing only water. The test drug was administered orally at one dose level of 2000 mg/kg b.w. after that rat were observed continuously for the first 4 h and then periodically up to 24 h for toxic symptoms and mortality [12].

Albino mice of either sex were divided into four groups designated as I-IV each group containing six mice. The control Group I received 0.1% sodium CMC whereas, Group II, III and IV animals were pretreated with AFTZ (75, 150, and 300 mg/kg, p.o.), respectively. Blood samples were collected from mice (after 14 days of drug treatment) by retro-orbital puncture in EDTA containing vials and subjected to total leukocyte cells (TLC) count and differential leukocyte cells (DLC) count. After initial count, the blood samples were incubated with 80 mg/ml of nylon fiber at 37° for 15 min [13]. The incubated blood samples were again analyzed for DLC counts. The percentage of neutrophil adhesion was calculated using following formula. Neutrophil adhesion (%)=[(NU-NT/NU×100], where NU=neutrophil count in untreated blood, NT=neutrophil count of fiber treated blood.

Albino mice of either sex were divided into four groups designated as I-IV each group containing six mice. The control Group I received 0.1% sodium CMC. Mice were divided into four groups of six each. Group II, III and IV animals received AFTZ (75, 150, and 300 mg/kg, p.o.) for 15 days, respectively. On day 16, blood was collected from retro-orbital plexuses of the individual animals and total WBC, RBC, and Hb were determined [16].

Albino mice were divided into five groups designated as I-V each group containing six mice. The control Group I received 0.1% sodium CMC. Groups II was administered with only CY at the dose of (30 mg/kg, i.p.) while Group III, IV and V received AFTZ at doses of (75, 150, and 300 mg/kg, p.o.) administered for 15 days prior to administration of CY. Groups II to V received CY at a dose of (30 mg/kg, p.o.) for the next 3 days. On day 19, blood was collected from retro-orbital plexuses of individual animals and analyzed for hematological determination [16].

TLC plates was observed in day light the brownish-red colour spot with Rf value 0.4-0.45.The tested extract did not exhibit any toxicity symptoms and mortality in all groups when given orally at a dose 2000 mg/kg b.w. All the fractions were safe up to the dose of 2000 mg/kg b.w., hence three different doses (75,150 and 300 mg/kg b.w., p.o.) were selected for pharmacological study. In neutrophil adhesion test, as presented in Table 1, pretreatment of AFTZ (75,150 and 300 mg/kg; p.o.) elicted a significant increased in neutrophil adhesion to nylon fibers, which correlates the increase in percentage of neutrophils. Percentage of neutrophils was increased more significantly (P<0.001) as compared to control group. The percentage of neutrophil adhesion rate in control group animal was noted to be 40.43%, where as in AFTZ treated groups it was found with 50.58, 52.99 and 54.21%, respectively. 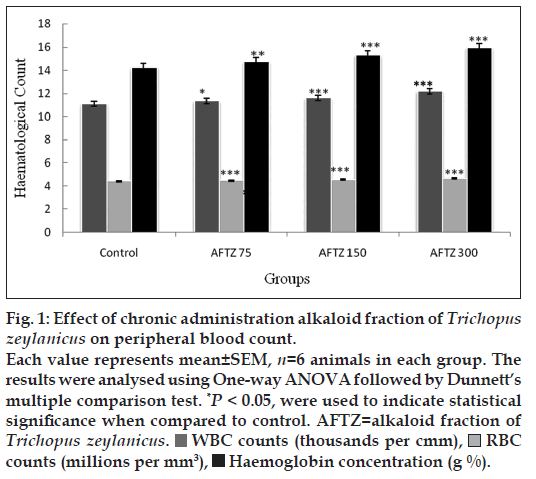 CY at the dose of (30 mg/kg; p.o.) caused a significant reduction in the WBC’s, RBC’s, Hb, and platelets concentration. Combined treatment of CY and AFTZ (75,150, and 300 mg/kg; p.o.) resulted in restoration of bone marrow activity as compared with cyclophosphamide treatment alone. All hematological parameters are significantly increased (Table 3). Recovery period observation indicated that CY induced immunosupression was not restored to normal, even after discontinuous use of CY. It was observed that mice treated with AFTZ showed more normal activity as compared to CY treated groups.

The results obtained in this study, claimed the traditional and medicinal purpose of Trichopus zeylanicus. In the present investigation, the immunomodulatory activity of AFTZ played an important role in indigenous system on Indian medicine was studied.

Ayurveda emphasizes the use of plant-based medicines and treatments. Various plants well-known in the Indian Ayurvedic system of medicine demonstrate prosperity of pharmacological properties. The Ayurvedic system of medicine is one of the oldest systems of medicine and includes various ethnopharmacological activities such as immunostimulation, tonic, neurostimulation, antiageing, antibacterial, antiviral, antirheumatic, anticancer, adaptogenic, etc.

An entire section of the Materia Medica of Ayurveda is devoted to “Rasayana”, drugs reputed to enhance body resistance. Listed as a class in the texts of traditional Indian Medicine literature, Rasayana consists of a number of plants reputed to promote physical and mental health, improve defense mechanisms of the body and enhance longevity. These attributes are similar to the modern concept of adaptogenic agents, which are known to afford protection of the human physiological system against diverse stressors. A number of medicinal plants as Rasayanas have been claimed to possess immunomodulatory activity, such as Withania somnifera, Tinospora cordifoliaetc and others [17].

In the present study, AFTZ showed significant immunomodulatory activity. AFTZ may produce immunity against foreign body using various mechanisms. In neutrophil adhesion test, the neutrophil, an end cell unable to divide and with limited capacity for protein synthesis is nevertheless capable of wide range of responses in particular chemotaxisis, phagocytosis and exocytosis and both by extra and intra cellular killing[19]. In the present study, AFTZ evoked significant increase in percent neutrophils. Boundary of neutrophil from the blood stream require a firm adhesion which is mediated through the interaction of the B2 integrins stored in cell granule and up regulated for firm adhesion [20]. In present study AFTZ evolved significant increased in percent neutrophil this may help to increase immunity against infection and adhesion of neutrophil to nylon fibers was increased in AFTZ treated groups as compared to control.

DTH is a part of the process of graft rejection, tumor immunity, and, most important, immunity to many intracellular infectious microorganisms, especially those causing chronic diseases such as tuberculosis [21]. DTH reaction is characterized by an immunoinflammatory reaction in which TH1 and macrophages play an important role. DTH reaction needs specific antigenic substance which will release cytokines by activation with T-lymphocyte. In present investigation SRBC was used as the antigenic substance which elicits hypersensitivity reaction in mice. Number of evidence suggest the DTH reaction is important in host defense against parasite and bacteria that can live and multiply intracellularly [22]. Treatment with AFTZ enhanced DTH reaction, which is reflected from increased foot pad thickness compared to control group suggesting increased infiltration of macrophage to the inflammatory site. It was found that AFTZ dosedependently potentiated the DTH reaction induced by SRBC.

Chronic administration of AFTZ significantly increased the total WBC’s count, RBCs count, and Hb count. A high degree of cell proliferation renders the bone marrow a sensitive target particularly to cytotoxic drugs. Bone marrow is the organ most affected during immunosupression therapy with this class of drug. Loss of stem cells and inability of the bone marrow to regenerate new blood cells results in thrombocytopenia and leucopenia [23]. On administration of CY at a dose of (30 mg/kg, p.o.) showed significantly lowered the total WBC count, while AFTZ was found to significantly increase the total WBC count and platelet counts, indicates that the AFTZ can stimulate bone marrow activity.

The present investigation suggests that AFTZ may play an important role in stimulation of both humoral and cell mediated immunity. The AFTZ helps to reduce the side effects of drug induced myelosupression, such evidence support for balancing and adaptogenic activity of AFTZ. Thus result obtained, it can be concluded that Trichopus zeylanicus could be served as an effective immunomodulatory activity. Further studies on the mechanism of action AFTZ in order to establish its therapeutic efficacy in autoimmune disorder.

Authors are thankful to Dr. Pushpangadan P and Dr. Saudagar RB, for providing information regarding the plant Trichopus zeylanicus and also thankful Dr. Lalit and Prof Vaibhav for providing necessary information for isolation of alkaloid fraction and biological activity.