Sustained-release dosage form extends the duration of time of therapy, reduces side effects and increases safety and patient compliance by reducing the frequency of dosing [1]. Drug release-retarding materials play an important role in such systems. Various materials are thus been investigated for sustaining the release from the drug-loaded matrices. Some of them such as agar, guar gum, sodium alginate and locust bean gum have been thoroughly reviewed earlier [2]. Of the various approaches to formulate sustained release matrices, one method is to incorporate drug with release-retarding polymer. Most commonly used polymers for such operations are cellulose ether derivatives, including hydroxypropyl methylcellulose (HPMC) [3]. Due to nontoxicity, easy handling and no requirement of specified technology for production of sustained-release tablets, HPMC is often used as release-retarding material [4].

Gum copal (GC) and gum damar (GD) have been studied for their sustaining property [5]. GC has also been studied as a coating material for sustained drug delivery [6], whereas GD has been studied as a microencapsulating material [7]. All the work shows good sustaining property of the materials. These polymers are mainly used as varnish and have a natural origin. GC is extracted from trees of Burseraceae family and GD is obtained from Dipterocarpaceae trees [8].

Different approaches have been tried to sustain the release of the drug from the dosage form, but the matrix system in which drug is dispersed in a porous network of polymer is the most attractive from the economic, process development and scale-up points of view [9]. Different polymers have been used to formulate sustained-release tablets. But, very few have been used extensively. Thus, search of the polymer for sustaining the release is still going on. Natural polymers are gaining more attention due to their biodegradability, stability and easy availability [10]. The high molecular synthetic polymers on the other hand are less susceptible towards degradation and are unstable in shear fields [11].

Diclofenac sodium (DS) is a nonsteroidal antiinflammatory agent that is widely used. The drug is utilized for treatment of rheumatic disorders [12]. The drug is usually prescribed as once-a-day sustained-release tablets for management of arthritis [13]. The comparative in vitro drug release study from various formulations containing DS was carried out. For example, HPMC and NaCMC [14] have been used to sustain the release. The short half-life of the drug is one main reason to formulate an extended release formulation.

Thus, the aim of the proposed work was to study the effect of hydrophilic polymer on drug-release pattern from hydrophobic matrices. The utility of hydrophilic– hydrophobic combined matrices for sustaining the release of the drug was also monitored.

Sustained-release tablets of DS were prepared by using different concentrations of polymers. Various drug:polymer ratios of 1:3, 1:2, 1:1 and 1:0.5 were tried. From the dissolution studies, the ratio of 1:1 was found to be most effective as it retards the release of drug beyond 10 h. The ratio was maintained constant throughout the study and drug content was kept to 100 mg per tablet. The ratio of polymer was kept constant whereas combination of polymers was varied at different concentrations (100, 75, 50 and 25%). All the ingredients were passed through Sieve No. 100 (Sethi Standard Test Sieves, New Delhi, India) before mixing. Accurately weighed ingredients were blended before granulation and sufficient quantity of propanol was used as a granulating agent. The slug was passed through sieve no. 16 and granules were allowed to dry at room temperature (27±2°). The dried granules were then passed through sieve no. 40 and weight of fines was kept to 5% of granules. Magnesium stearate in the concentration of 1% w/w was added to the dried granules prior to compression. The granules were compressed using 10 mm concave punches on a rotary tablet press machine (Rimek Minipress ?) at an appropriate compression force. The weight of the tablet was kept to 400 mg. Table 1 depicts the composition of different matrix tablets.

The matrix tablets were evaluated for weight variation, tablet hardness, friability and crown thickness. For weight variation, 20 tablets were randomly selected from each batch and were checked for weight uniformity. Friability of tablets was checked using Roche friability apparatus. Thickness was measured using Vernier calipers and Monsanto hardness tester was used to measure the hardness of tablets. All the evaluation parameters are given in Table 2.

Each value is mean N=3±SD. The formulations containing gum damar and gum copal were evaluated for different evaluation parameters as per IP

The tablet hardness was determined using Monsanto hardness tester. Tablets were kept lengthwise between the two plungers of the tester and pressure was applied. The force at which tablets get crushed was determined. Ten tablets were studied for this purpose.

Friability of the tablets was checked using Roche friability, where the device subjects number of tablets to the combined effect of abrasions and shocks utilizing a plastic chamber that revolves at 25 rpm dropping the tablets from the distance of 6 inches with each rotation. Preweighed tablets were placed in the Friabilator which was then operated for 100 revolutions. Tablets were de-dusted and reweighed.

To determine the content uniformity in tablets, 20 tablets were weighed and powdered. Powder equivalent to 50 mg of diclofenac sodium was weighed and shaken with 200 ml of methanol. About 5 ml of this solution was diluted to 100 ml with methanol and absorbance was taken using UV-spectrophotometer (UV-1600, Shimadzu, Japan) at 285 nm. The drug content was determined using standard calibration curve of diclofenac sodium.

In vitro release of drug

In vitro studies were carried out using Electrolab Dissolution apparatus USP?????. The USP type 2 (paddle type) apparatus was used and rotation was kept at 100 rpm. Dissolution medium was 900 ml phosphate buffer pH 6.8 and dissolution time was 10 h. Temperature was maintained at 37±1°. Aliquots of 10 ml were withdrawn after each hour and equivalent amount of fresh buffer maintained at same temperature was replaced. The samples were analysed for diclofenac sodium content at 276 nm by UV-spectrophotometer. The test was performed in triplicate for each batch.

Mechanism of drug release from the matrix tablets can be studied using different mathematical expressions. The drug-release data were analysed according to zero order, fist order, Higuchi square root, Kosmeyer-Peppas and Hixon-Crowel equations [15]. The appropriate model was chosen on the basis of goodness of fit test.

The reason for using polymers in specified quantity has been explained earlier. The preliminary studies showed that lubricant in the concentration of 1% w/w gave sufficient flow properties. Also, in higher concentration, it can affect release of drug from the matrices. All the evaluation parameters are given in Tables 2-4. The parameters are well within the prescribed limits of IP 1996. Hardness of the tablets were slightly higher, which might be due to solubility of GC and GD in alcohol. But, this higher hardness value has a very slight or no effect on release of drug. Tablets showed less friability which is due to appropriate hardness. All batches have hardness in the range of 5.9-7.5 kg/cm2.

Each value is mean N=3±SD. The formulations containing GC and GD with HPMC were evaluated for different evaluation parameters as per IP. HPMC=Hydroxypropyl methylcellulose

Each value is mean N=3±SD. The formulations containing GC and GD with HPMC were evaluated for different evaluation parameters as per IP. HPMC=Hydroxypropyl methylcellulose

Release of diclofenac sodium from GC and GD matrices is given in figs. 1 and 2, respectively. The release of drug from the individual polymer matrices was found to be affected by the type of diluent used. Tablets having dicalcium phosphate as a diluent shows more sustained release, whereas that of lactose-containing batches releases drug at higher concentration. But, the presence of microcrystalline cellulose in the tablets shows varying release patterns. The release of drug from the combined matrices increases as the concentration of the HPMC in the matrices is increased. The replacement with 75% of HPMC leads to release of the drug within 2 h which is not acceptable. The probable reason might be the interference in cross linking of HPMC by hydrophobic GC and GD. The solid particles (GC or GD) can reduce entanglement of HPMC chains which lowers gel resistance [15,16]. Although 50% replacement of polymer shows release up to 90%, matrices containing 25% of HPMC give the release pattern that is similar to the marketed formulation (figs. 3 and 4). It was found that release from combined matrices was not significantly affected by the type of diluent used, but presence of dicalcium phosphate retards the release for a longer time than the other two. The initial burst release from the matrices was lowered by the presence of 50% HPMC in the matrices. Availability of sufficient time for swelling and gelling might be the reason for decreased initial burst release. The presence of the hydrophobic polymer in higher concentration leading to water impermeable matrices might be the reason for sustained release in 75% of the GC/GD tablets. The observations are very much similar to the results obtained by Takka et al. [17] for HPMC:Eudrgit S. 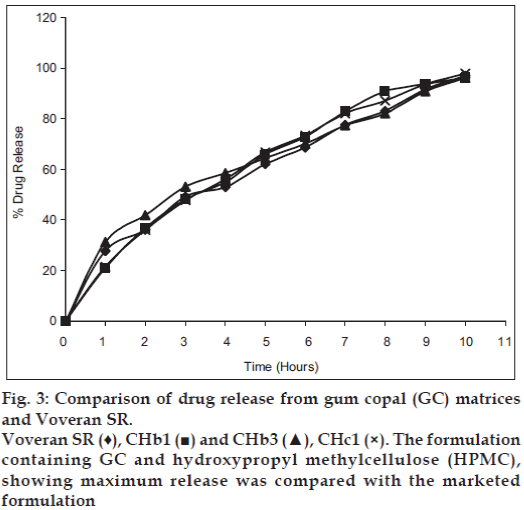 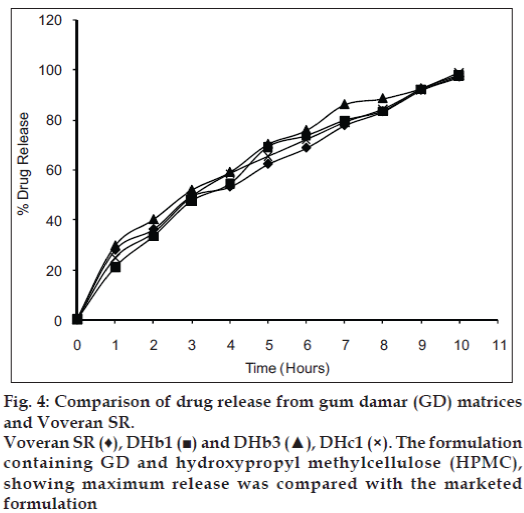 The release kinetics supports the observations, as individual matrices show Kosmeyer-Peppas as a release model (Table 5). The release from hydrophobic matrices might be following the combination of release mechanisms. The addition of HPMC in the matrices leads to shift of the release pattern towards Higuchi’s model. Reduction in the initial burst release from the matrices might lead to higher ‘n values. The release from the Voveran SR was found to be following Higuchi’s equation and the exponent of it was sliding towards Zero order release which is desirable. The formulations containing 50% of HPMC showed a similar release pattern. Thus, it can be concluded that replacement of 50-75% of HPMC with GC or GD yields matrices with desired release pattern. Moreover, the release pattern resembles with the one available in market. But, only 25% replacement of HPMC with GC or GD fails to retard the release. All the parameters of the tablets were found within limit and it can be postulated that polymers do not affect the evaluation parameters. Also, diluent shows its effect on release pattern. Thus, its presence plays a vital role in the release of drug from matrices.

All the tablet formulations were subjected to various evaluation parameters and the results obtained were found to be within the prescribed range. The weight variation test indicates that all the tablets were uniform in weight with very low standard deviation. The hardness of the tablets was found to be in the range of 5.9-7.4 kg/cm2. The loss of tablet weight during friability testing was not very significant and it ranged between 0.01 and 0.40%. The drug content varied from 94 to 100 mg which acceptable as per IP 1996.

The authors thank M/s. Zim Laboratories, Kalmeshwar for providing diclofenac sodium as a gift sample for this work. They are also thankful to Imex Inc., Chennai for providing gift samples of GC and GD. They appreciate the facilities provided by Smt. Kishoritai Bhoyar College of Pharmacy, Kamptee, Nagpur.