A liquid chromatographic method has been established for the separation of metformin, glipizide, gliclazide, glibenclamide and glimepiride using experimental design. The main intention of this method is to optimize suitable chromatographic conditions for the proper elution of the drug molecules with minimal analysis time. The relationship between the individual and combined effect of critical process parameters and chromatographic efficiency was made clear and was achieved with the aid of experimental design methodology. Waters Sunfire C18 type column (150×4.6 mm, 5 µm particle size) was employed and 0.1 % acetic acid in water: acetonitrile mixture was adopted as mobile phase (flow rate: 0.469 ml/min) for the separation of analytes. The developed method was validated and has been extended for the assay of marketed formulations. 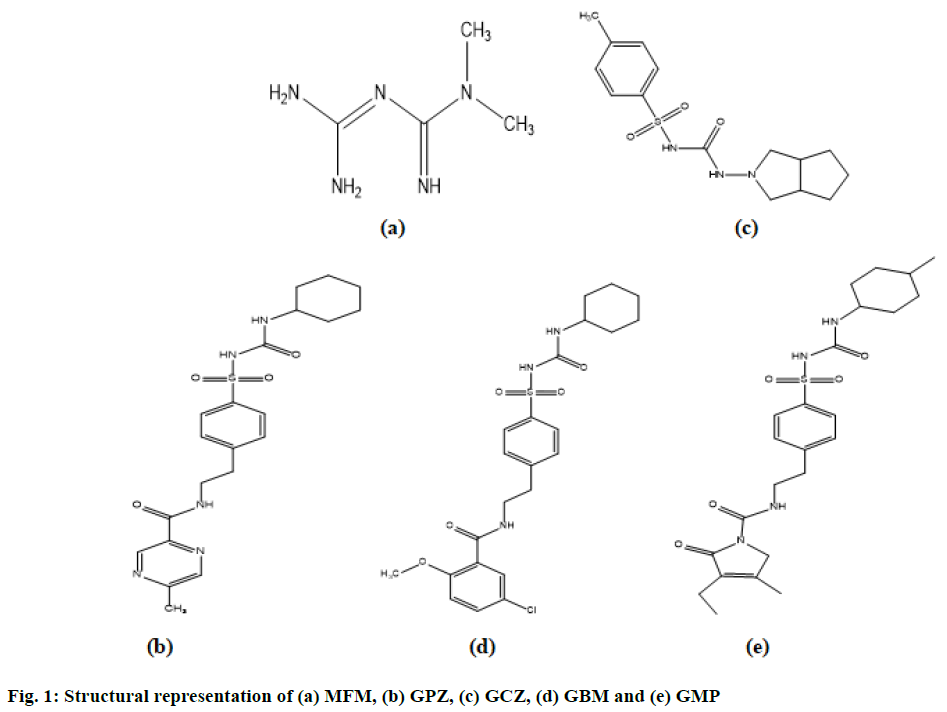 The optimization of chromatographic methods is often very complex while dealing with combination of compounds due to different variables. The chromatographic separations are mostly based on trial and error procedures. This traditional approach involves the study of the influence of corresponding variables by changing one variable at a time (OVAT) while keeping the other variables constant. The major disability of these methods is time consuming as it requires a greater number of trial experiments with no predicted conditions and therefore unable to predict the conceivable interactions within the factors on the responses.

In such separations, the method can be optimized at its best by employing quality by design (QbD) which is a systematized approach for the development of an analytical method that incorporates multifaceted combinations of independent variables and their interactions by applying design of experiments (DoE), to obtain optimal experimental conditions. DoE also provides an inference on possibility of understanding and also to mark the variables which majorly affects the method performance. As reported by International Council on Harmonisation (ICH) guideline Q8(R2)[3], the QbD approach is a de?ned optimization approach combining the DoE and Design Space (DS). As per the guidelines DS is de?ned as the multidimensional combination and interaction of input variables (e.g. material attributes) and process parameters that have been demonstrated to provide assurance of quality. Both graphical (overlay contour plots and three-dimensional (3D) plots) and mathematical (Derringer’s desirability function) functions are involved in the approach of better method optimization[4-8].

Few methods have been proclaimed in the literature for the determination of various combinations of antidiabetic drugs in human plasma and pharmaceutical dosage forms which include thin layer chromatography (TLC)[9], high performance liquid chromatography (HPLC)[10-15] and liquid chromatography-tandem mass spectrometry (LC-MS/MS)[16]. No method with the aid of DoE, has been developed till now for the simultaneous determination of MFM, GPZ, GCZ, GBM and GMP. Therefore, the authors have made an attempt to develop a validated chromatographic method with the help of Central Composite Design (CCD), as a model for DoE and to apply the same for the assay of available marketed combined dosage formulations in India.

The data management software Shimadzu’s LC Solutions v1.25 (Kyoto, Japan) was used to monitor, integrating and processes the chromatographic responses. For the experimental designs and the selection of the runs, Design Expert 10.0.2.0 trial version (Stat-Ease Inc., Minneapolis, MN, USA) has been used. The statistical interpretation for the optimization of the analytical method and effects of parameters were studied and calculated

All the stock solutions of MFM, GPZ, GCZ, GBM and GMP were prepared separately by transferring accurately 25 mg of each into different 25 ml volumetric flasks in ACN (1000 μg/ml) and dilutions were made with mobile phase and finally filtered through 0.45 μm nylon membrane filter before injecting into the HPLC system.

The method was validated as per the ICH guidelines[17]. For linearity study a series of drug solutions (0.01- 400 μg/ml) were prepared from their respective stock solutions of the raw materials, scanned and analysed. The precision studies were performed by analysing each drug solution at different levels (5, 10 and 20 μg/ml) at different intervals on the same day (intra-day) and on three different days (inter-day) respectively. Accuracy studies were conducted by calculating the percentage recovery for the solutions prepared by spiking with pre-analysed samples for all the five drugs. Robustness study was performed (10 μg/ml) by modifying slightly the chromatographic conditions such as flow rate, mobile phase ratio and detection wavelength. The solution stability was performed for 24 h, by storing the stock solution in a tightly capped volumetric ?ask at 4-8°. Mobile phase bench top stability was assessed by assaying the freshly prepared sample solutions against freshly prepared reference standard solutions at regular intervals up to 24 h.

Twenty tablets from each brand of the five drugs were procured from the local pharmacy store and extracted the drugs with mobile phase and the percentage recovery was calculated.

Method development and optimization is carried out and the main aim of developing the reverse phase high performance liquid chromatography (RP-HPLC) method is to determine simultaneously MFM, GPZ, GCZ, GBM and GMP in bulk and as well as in pharmaceutical dosage forms which were separated from each other with good resolution (RS>2.0) due to modified critical HPLC parameters. It is necessary to identify the crucial factors that can affect the separation of these drugs. During the preliminary screening different columns, several mobile phase compositions, flow rate etc. were screened in different combinations. Waters Sunfire C18 (150×4.6 mm, 5 μm) column was able to show proper resolution of the drugs. From this, percentage of organic phase and flow rate were identified as critical variables on the chromatographic response of these five drugs with least noise. The overlay UV absorption spectrum (fig. 2) shows that the 230 nm is the suitable wavelength at which all the five drugs can be detected satisfactorily. In the present study for the optimisation of liquid chromatographic method, the authors have chosen CCD, which is one of the models of response surface methodology in the experimental design. Independent variables i.e., ratio of organic phase and flow rate, each at three levels were mentioned in Table 1. The levels for each factor were selected based on initial preliminary trials.

Table 1: Experimental Variables and Coded Levels Used In the Ccd

The statistical parameters from the analysis of variance (ANOVA) were listed in Table 3. The probability p<0.03 for all the chromatographic responses implies that the models are highly significant. The model has provided the high values of correlation coefficient (R2) and adjusted R2 indicating a close relation between the experimental and the predicted values of the responses. The adequate precision measures the signal to noise ratio which was found to be >4 indicating that the model can be used for the prediction of perfect chromatographic conditions. The polynomial equations are given below (Eq. (1-11)) in which A: % organic phase (% ACN) and B: flow rate (ml/min).

The perturbation plots are represented in fig. S2 which describes the effect of the independent variables on specific response with all other variables held constant at a reference point. 3D response surface plots (fig. 3) and Contour plots (fig. S3), portray the combined effect of both organic phase and flow rate on the responses, which were very much useful for studying the interaction effect of variables on the responses. From these it is evident that most of the responses are very much sensitive towards variable A, showing negative effect for Rs(MFM−GPZ), Rs(GPZ−GCZ), Rs(GCZ−GBM), Rs(GBM−GMP) and total run time indicating that increasing levels of A results in decreased response, on the other hand TGPZ, TGCZ, TGBM, TGMP responded positively for increasing levels of A. In case of TMFM, both increasing and decreasing levels of variable A shows negative effect, showing maximum response at the reference point. Increasing levels of Variable B shows negative effect on TGPZ, TGBM, TMFM and total run time. In case of TMFM, both the higher and lower levels of variable B show increased response, while other responses were no much effected. The main objective is to separate the peaks with all system suitability parameters within the limits with minimum analysis time. Derringer’s desirability function (D) is a multi-criteria decision-making tool to conciliate various responses to acquire the composition of different independent variables. The value of D differs from 0 to 1 meaning that the responses are in a desirable range and the value close to 1 specifically implies that the response values are near to target values. The criteria of optimization for each individual response were clearly shown in Table 4. Generally, short analysis time with good resolution and less tailing of the eluted peaks is preferred. The optimization procedure was carried out by following the conditions and the criteria provided by the design expert. The desirability of the method gives overall impression on the achievement of required criteria of each and every response.

The Desirability bar graph shown in fig. 4 demonstrates the desirability of each response at the optimised chromatographic conditions. Two runs in total have shown the maximum desirability. Percentage prediction error (PE) was calculated from Eq. 12 for each response and the mean for all the responses in every run was shown in Table 5.

Table 5: For Selection of the Final Optimized Chromatographic Condition 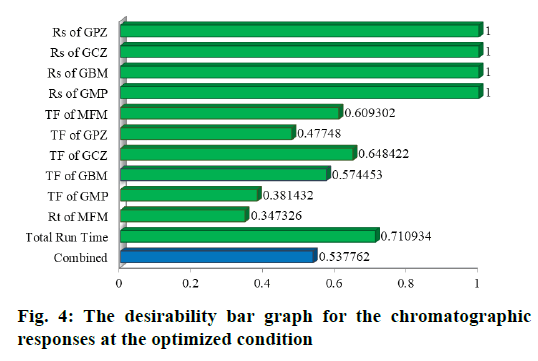 Figure 4: The desirability bar graph for the chromatographic responses at the optimized condition

The runs were scrutinized based on the mean percentage PE and the run (run 2) with least PE value was nominated as the desired method. The DS plot (fig. 5) revealed that, the so obtained optimized method had fallen within the DS. 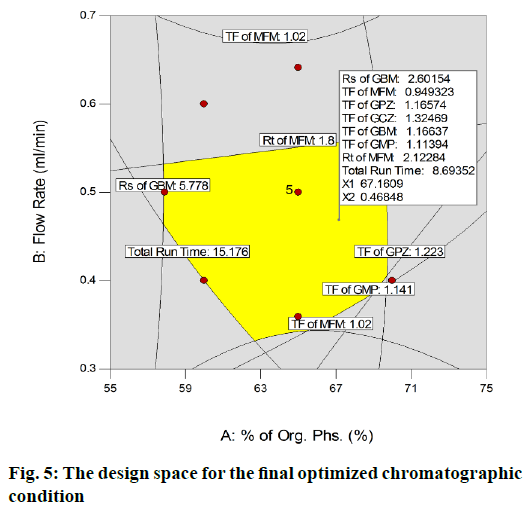 Figure 5: The design space for the final optimized chromatographic condition

Finally, the optimised chromatographic condition was racked up with a mobile phase comprising of 0.1 % acetic acid in water and ACN (32.9:67.1 % v/v) and flow rate 0.469 ml/min. At this optimised condition, MFM, GPZ, GCZ, GBM and GMP were eluted at 2.129, 4.718, 7.076, 7.927 and 8.794 min respectively. The subsequent typical chromatograms for the mixture, individual standard chromatograms were shown in fig. 6. From the overall optimization, it was properly identified that most of the variables have been fully attained as per the requirement while some variables have been slightly attained but within the limit. On the whole, method shows best chromatographic responses. 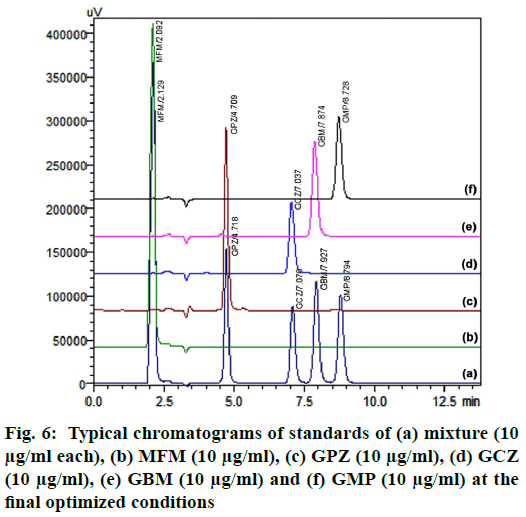 According to ICH guidelines[17] the optimised method was validated and the data was given in Table 6.

From the results obtained in both intra-day and interday, precision studies were summarized in Table S2 which demonstrates the method precision (i.e., % relative standard deviation (RSD)>2).

The recovery for the five drugs in the accuracy study ranged between 97.61-99.24 % (Table S3). The results when compiled with the ICH requirements proves the method accuracy.

The robustness of the method was evaluated by assaying the same sample under different analytical conditions deliberately changing from the original condition. The detection wavelength was set at 228 and 232 nm (±2 nm), the ratio of percentage of 0.1 % acetic acid: ACN in the mobile phase was applied as 30.9:69.1 and 34.9:65.1 (±2, % v/v) and the flow rate were set at 0.4221 and 0.5159 ml/min (±10 %). The results obtained for the robustness study (Table S4), shows that the retention times and the percentage (%) recoveries were not much affected by varied conditions during the robustness study and the % RSD is <2.0 indicating the method robustness.

The proposed method was applied to the available formulations and the percentage recoveries were calculated (Table 7).

Table 7: Results for Assay of Formulations

Statistically based experimental design has proven as an important methodology in the optimization of the simultaneous determination of MFM, GPZ, GCZ, GBM and GMP. The significant variables were optimized by employing CCD which provides the sensitivity of the chromatographic responses to the interactions of the selected variables. The present approach maximises the information content of the experimental data with minimum number of experimental runs. The method selectivity, precision, accuracy and robustness with the low time of analysis shows the suitability and better choice for the analysis of the drugs in the complex mixtures. The application of the present method on commercial formulations demonstrated good results and it seems as an option to use on quality control of the formulations in regular use.