The present study was aimed to screen and identify antibacterial bioactive nitrogenous secondary metabolites produced by the marine Streptomyces sp., VITLGK012. The antibacterial potential of the extracted compound was studied using agar well diffusion method. Minimal inhibitory concentration of the compound for antibacterial activity was estimated using the plate dilution method. The isolate was characterized by morphological, biochemical and molecular taxonomy using 16S rDNA sequencing. Chloroform extract was prepared and purified by silica gel column chromatography. The nitrogenous fraction was identified with Dragondorff’s reagent. The structure of the pure compound was identified by gas chromatography coupled with mass spectrometry, Fourier-transform infrared spectroscopy and proton nuclear magnetic resonance spectroscopy. Crude extract of VITLGK012 showed antibacterial activity with a MIC of 0.5 mg/ml against Proteus vulgaris. VITLGK012 strain was identified to be a Streptomyces species based on 16S rDNA sequencing. Gas chromatography and mass spectrometry analysis showed the presence of more than 10 molecules in the crude extract. Based on spectroscopic analysis, the extracted compound was found to be nitrogenous in nature and was identified as gancidin W. The results of the study suggested that Streptomyces sp. VITLGK012 could be a good source for nitrogenous antibacterial secondary metabolites.

The incidence of pathogens developing resistance to current drugs has increased in the resent past and cancer cells also becoming resistant to existing class of cancer drugs; hence there is a pressing need to discover novel bioactive compounds capable of acting on drug resistant pathogens and cancer cells. Marine actinomycetes from unexplored or under-explored regions are capable of producing novel secondary metabolites and complex chemical structures. Rameswaram and Dhanushkodi are examples of unexplored or under-explored regions from India for actinomycetes diversity and secondary metabolites. Only very few studies are available on actinomycetes diversity [3]. In the present study, Rameswaram and Dhanushkodi marine soil samples were screened for potential antagonistic actinomycetes with the aim to isolate antibacterial secondary metabolites.

Marine soil samples were collected from Rameswaram and Dhanushkodi cost, Tamil Nadu, India at different locations. The top layer of the soil was removed using sterile tools and samples were collected in sterile air lock bags under aseptic conditions. The soil samples were serially diluted and 0.1 ml of each dilution was plated on composed-starch casein agar (composed- SCA) medium using spread plate technique. The plates were incubated at room temperature for a week and the colonies with dry powdery appearance were subcultured onto another fresh media plate to obtain a pure culture. Composed-SCA contained in g/l of, starch- 10 g, casein- 0.3 g, KNO3- 2 g, NaCl- 2 g, K2HPO4- 2 g, MgSO4.7H2O- 0.05 g, CaCO3- 0.02 g, FeSO4.7H2O- 0.01 g and agar- 18 g in 1 l of distilled water [4].

All actinomycetes isolates were screened for antibacterial activity against selected test pathogens. Based on the antibacterial activity, the isolate VITLGK012 was selected for further analysis. The isolate VITLGK012 (3 ml seed culture) was inoculated aseptically on International Streptomyces Project (ISP) No.1 broth media and incubated at room temperature (+/–37°) for 7 d, in a rotary incubator at 110 rpm. After incubation, the culture was filtrated using mesh cloth to remove the biomass and the cell free culture supernatant was mixed with equal volumes of chloroform. The solvent and supernatant were mixed vigorously and allowed to mix further by leaving on a rotary shaker overnight. The solvent phase was separated and condensed in a rotatory vacuum evaporator. The procedure was repeated till sufficient quantity (5 g) of the crude was obtained [5].

Bacterial pathogens, Escherichia coli MTCC-1886, Proteus vulgaris MTCC-7299, Bacillus cereus MTCC- 1168, and Staphylococcus aureus MTCC-7405, were freshly cultured in a nutrient broth as inoculum. Lawn culture of these pathogens was made on Muller-Hinton agar (MHA) HiMedia, plate. Wells were punched on these MHA plates using a well borer. To these wells, various concentrations of crude extract were added and incubated overnight at 37°. After which, the zone of inhibition (ZOI) was observed and measured using ruler compared with Streptomycin (positive control) [6,7].

The genomic DNA of VITLGK012 was isolated by phenol:chloroform method and was subjected to PCR amplification with 16S rDNA universal primers, i.e., 27F and 1492R. The obtained product was then labeled using fluorescent primers, i.e., 785F and 907R and the fluorescent-labeled PCR products are sequenced using an ABI-3730xl sequencer (Applied Biosystems). The obtained sequence was searched in the NCBI database for similarity using BLAST search. The MEGA 6.06 software was used to construct the phylogenetic tree of the sequence, using neighbor-joining method [8].

The GC-MS analysis (Jeol GCMATE II GC-MS, Agilent Technologies 6890N Network GC system for gas chromatography) was performed and the instrument is attached to a mass spectrum (MS) component. GC column (fused silica) HP5 (50 m×0.25 mm) was used. Column temperature was maintained at 100° for 20 min, 235° for 3 min and injector temperature 240°, Helium was used as carrier gas, and split ratio was 5:4. The results from the MS analysis are cross-matched with the NIST library and the closest match is identified [9].

The FTIR spectrum of the pure compound was analysed on a PerkinElmer Spectrum 1 FTIR spectrometer at a resolution of 1 cm−1 at a scan range of 450 to 4000 cm−1 [10]. H1NMR analysis was done in AV500 FT-NMR spectrometer to identify the functional group present in the compound [11]. The optimal growth of VITLGK012 was studied using seven different ISP culture media. The isolate, grew well on all the media, except in ISP-6, where the growth was very low. The morphological characteristics of VITLGK012 observed on the different ISP growth media are given in Table 2. The 16S rDNA sequencing of VITLGK012, yielded 1403 nucleotides, it was searched through the NCBI database for similarity and the isolate showed 93 % similarity towards Streptomyces rochei. Since it showed only 93 % similarity with S. rochi, VITLGK012 could be a novel strain. The phylogenetic tree of VITLGK012 is shown in Figure 2. The 16S rDNA nucleotide sequence was submitted to the GenBank under the accession ID: KT597921.ID.

The chloroform extract of VITLGK012 was analysed using GC-MS, which demonstrated the presence of more than 10 different compounds, with a single major peak at a retention time of 18.13 min in the gas chromatogram. The GC-MS chromatogram of the chloroform extract of VITLGK012 is shown in Figure 3. The NIST library matching of GC-MS chromatogram for the major peak (18.13 min) showed more than 95 % similarity with 3-(2-methylpropyl)-octahydropyrrolo[1,2-a] piperazine-1,4-dione (gancidin W). 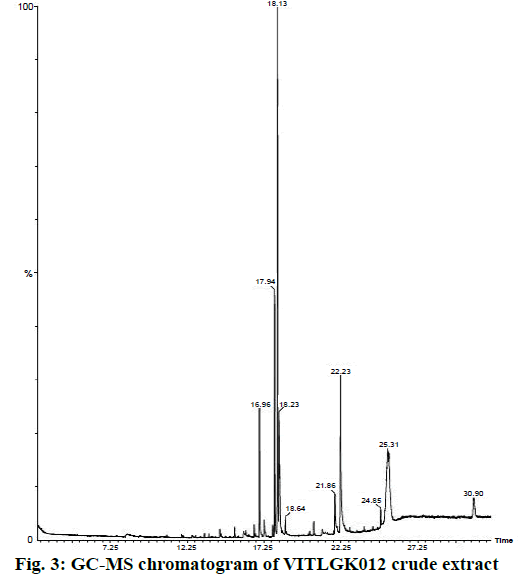 Individual peaks were obtained in TLC plate with chloroform:carbinol (9:1 v/v) solvent system (Figure 4). The chloroform extract was fractionated using silica gel 60-120, column chromatography, with the same solvent system. A total of 28 fractions were collected at a flow rate of 1 ml/min, with a volume of 5 ml each. Fractions 16-20 was positive for Dragondorff’s test and the pure compound separated using column chromatography are shown in Figure 4. 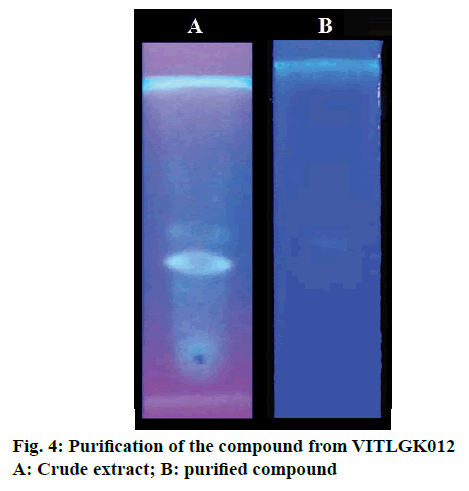 Figure 4: Purification of the compound from VITLGK012
A: Crude extract; B: purified compound 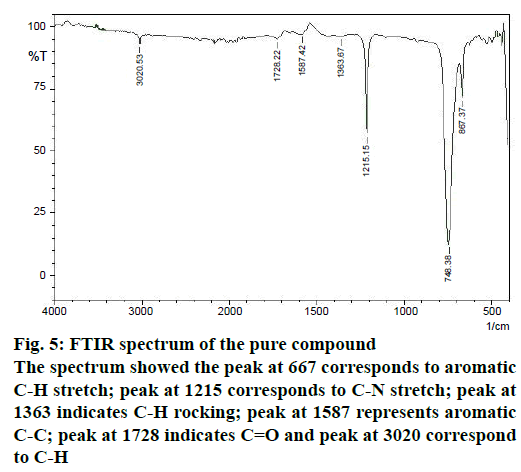 The identified compound contains two chiral carbons in its structure, hence, it has four isomeric forms, 3R, 8aR; 3S, 8aR; 3R, 8a and 3S, 8aS, which are represented in Figure 8. Based on the structure of the compound, it was identified to be a dipeptide molecule, made up of two aminoacids, proline and leucine. Figure 8: Isomeric forms of gancidin W
A. Gancidin W and B. isomers

Bioactivity-guided extraction and purification resulted in the identification of the nitrogenous compound, gancidin W. Isolation of gancidin W from other Streptomyces species was already been reported [17-19]. Gancidin W from Streptomcyes No: AAK-84 was reported as an antibiotic secondary metabolite in 1977 [20]. Initially, it was referred as cyclopeptide molecule made up of proline and leucine. It was reported that S. gancidicus produces cyclo(leucylpropyl) and the gancidin-complex [21]. It was also produced by a marine microbe Corollospora pulchella [21]. Antimalarial activity of gancidin W extracted from endophytic Streptomyces SUK10 was reported recently [22]. Our results confirmed the antibacterial potential of gancidin W extracted from Streptomyces sp. VITLGK012.

The authors thank the VIT University, for providing facilities to do this study.