Microcrystalline cellulose was granulated using 5% w/v aqueous PVP K30 solution. The wet mass was passed through a 20# sieve to obtain granules. The granules were dried at 60º in a tray drier. The 20/40 mesh cut granules were used for preparing paracetamol tablets.

Paracetamol, PEG 6000 and intragranular fraction of crospovidone (half of the total amount of crospovidone) were heated (60±5°) in a porcelain dish. The heated mass was passed through a 20# sieve. The granules were allowed to cool to room temperature and blended with extragranular fraction of granular microcrystalline cellulose (MCC), crospovidone, Cab-O-Sil and magnesium stearate. The tablets were prepared on a single station tablet press (Cadmach Machines Ltd., India). The tablets were evaluated for percentage friability, crushing strength and disintegration time. Tables 1-3 and fig. 1 represents composition and results of the formulated batches. An optimized batch (batch AF4) was subjected for in vitro drug release (fig. 2).

Table 2: Formulation And Evaluation of Paracetamol Tablets According To 23 Full Factorial Design

The critical value of Fisher (F) value at 5% level of signifi cance is 18.5, SS is sum of squares, DF is degrees of freedom, MS is mean squares, F is Fisher’s variance ratio, NS is non-signifi cant

aSelected on basis of total mass of diclofenac sodium and HPMC K4M. 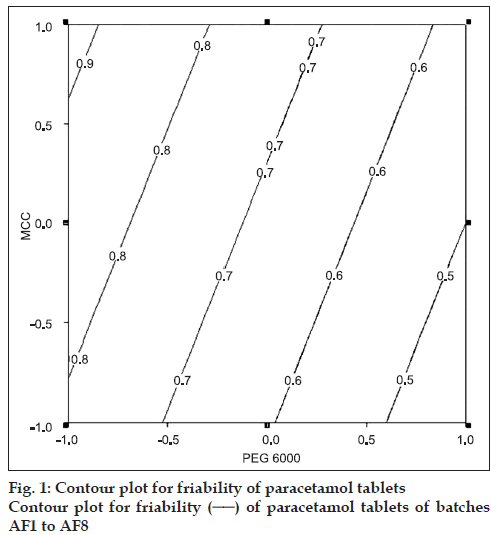 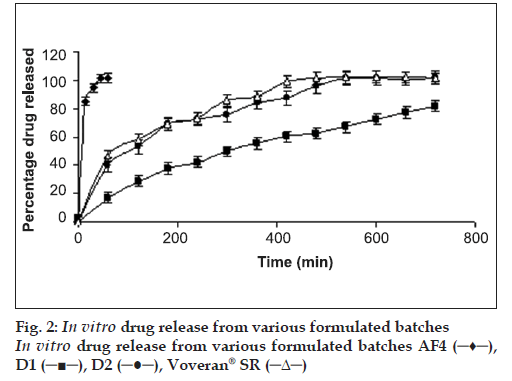 Mixture of diclofenac sodium and HPMC K4M (1:1, 1:0.75, 1:0.6, and 1:0.5) were granulated using a blend of water (1 part) and isopropyl alcohol (9 parts). The wet mass was passed through a 20# sieve. The granules were dried at 55º for 15 min in a tray drier. The 20/40 mesh cut granules were used for preparing modifi ed release diclofenac tablets. Cab-OSil and magnesium stearate, each at 0.5% w/w, were sequentially mixed with the granules and the tablets were compressed on a single station tablet press (Cadmach Machines Ltd., India). Diclofenac sodium tablets were characterized for percentage friability, crushing strength and in vitro drug release. Table 4 and fig. 2 represents the composition and the results of formulated diclofenac sodium tablets. 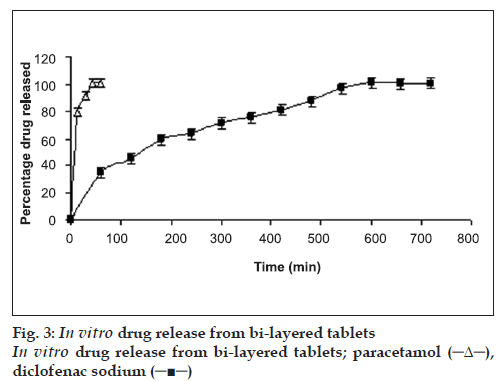 Evaluation of granules and tablets

in vitro drug release of paracetamol, diclofenac sodium tablets and reference product (Voveran® SR) was performed in phosphate buffer (pH 7.4, 37±0.5°) in USP XXIII paddle apparatus (Model TDT-00T, Electrolab, Mumbai, India), at a rotational speed of 50 rpm. Paracetamol and diclofenac sodium contents were estimated by UV/Vis spectroscopic method (Model UV-1700, Pharmaspec, UV/Vis Spectrophotometer, Shimadzu, Japan) at 243 nm and 276 nm, respectively after suitable dilution of the samples. The in vitro drug release of paracetamol and diclofenac sodium from bi-layer tablets was measured using HPTLC (Camag, Switerzland) [4]. The peak area was transformed to concentration of drug by reference to a standard calibration curve obtained experimentally (r2=0.99). The in vitro drug release data of batch D2 were compared with a market formulation (Voveran® SR) and the similarity factor (f2) was calculated from the mean drug release data [7]. The method of Bamba et al. was adopted to ascertain kinetics of drug release [8]. In vitro drug release data of batch D2 were analyzed by different kinetic models in order to evaluate the release mechanism of diclofenac sodium from the matrices [9]. A Fortran software, developed in-house, was used to analyze the data. The least value of sum of square of residuals (SSR) and Fisher’s ratio (F) were used to select the most appropriate kinetic model.

A three factor, two level full factorial design was adopted for optimization employing the amount of PEG 6000, crospovidone and granules of MCC (extragranular) as independent variables. Friability, crushing strength and disintegration time were selected as dependent variables. In ANOVA, the experimental error (residual) was estimated from the interactions (two or three way). The Fisher’s variance ratio (F) was compared with the tabulated value (Fcritical) for grading the factor as signifi cant or nonsignifi cant. Multiple linear regression was carried out and refi ned model was evolved (p<0.05). Further conclusions were drawn using contour plot.

rospovidone exhibits high capillary activity and pronounced hydration capacity when it comes in contact with aqueous fluids [10]. Microcrystalline cellulose is a compressible hydrophilic excipient and it also works as an auxiliary disintegrating agent [11]. Hence, granules of MCC were added extragranularly (Table 1). The results shown in Table 1 reveal that the tablets of batches AG1 and AG2 showed acceptable friability (<1%) and crushing strength (>40 N). The disintegration time was less than 11 min due to incorporation of wicking agent (MCC) in the tablets. The disintegration time of paracetamol tablets can be tailored by selecting optimum amount of PEG 6000, MCC and crospovidone. To systematically investigate the influence of the three independent variables (amount of PEG 6000, granular MCC and crospovidone), a 23 full factorial design was adopted. Eight batches (AF1-AF8) containing the same quantity of paracetamol, magnesium stearate and Cab-O-Sil, but varying amounts of PEG 6000, granular MCC and crospovidone were prepared. Table 2 represents composition and results of different batches of paracetamol prepared using factorial design. The high value of independent variables was transformed to +1 and the low value to -1 to facilitate calculations.

Table 2 shows that the percentage friability of tablet of batches AF1-AF8 was within the acceptable limits (<1%). Friability of the tablets ranged from as low as 0.2 to as high as 0.87. Therefore, it can be concluded that at least one of the independent variables or interactions significantly influences friability of the paracetamol tablets. The results of ANOVA following Yates treatment, for friability of paracetamol tablets (batches AF1-AF8) is shown in Table 3. The experimental error (residual) in ANOVA was estimated from the insignificant interactions. The mean squares relating to interactions AB, BC and ABC were distinctly lower than the other mean squares. These interactions were combined to give residual. The results shown in Table 3 reveal that the factors MCC, PEG and interaction between Crospovidone and PEG are significant at p<0.05. Multiple linear regression analysis was carried out omitting the interaction terms AB, BC and ABC. The main effects A, B and C and the interaction term AC were retained in the model, as they were statistically significant (Eqn. 1), friability= 0.5787+0.011A+0.071B–0.178C+0.088AC..(1), (R2=0.988, F=60.8, p<0.05)

The effect of the independent variables on friability cannot be judged from the main effects as two-way interaction term (AC) is also signifi cant. Grid search technique or contour plot may be used for evaluating the effect of independent variables on friability. In the present study, contour plot was utilized. The level of crospovidone was fixed at higher level (i.e. +1) to draw contour plot. Fig. 1 reveals that tablets with lower friability were obtained when PEG was used at high level. The result suggests that PEG is a good granulating agent as well as friability arrestor.

The crushing strength of the formulated paracetamol tablets (batches AF1-AF8) ranged from 35 to 75 N. The results of analysis of variance (ANOVA) for crushing strength of paracetamol tablets (batches AF1 to AF8), are shown in Table 3. The mean squares relating to AB, BC, AC and ABC interactions were distinctly lower than the other mean squares. These interactions were combined to give residual. The results shown in Table 3 reveal that none of the factors are signifi cant at 5% and hence multiple linear regression analysis was not carried out.

Considering the results of disintegration time, crushing strength and friability, batch AF4 was ranked as the optimized batch and subjected to in vitro drug release study. Fig. 2 depicts that more than 85% of paracetamol was released within 15 min from the tablets of batch AF4 and hence, batch AF4 was used for the preparation of bi-layer tablets.

Conventional paracetamol and modified release of diclofenac sodium can be obtained if microspheres of diclofenac and granules of paracetamol are compressed together. Alternatively, bi-layer technology may be adopted. The latter method was chosen in the present study since it is easy to adopt at industry.

Four batches of diclofenac sodium tablets were prepared using varying ratio of drug to HPMC (1:1, 1:0.75, 1:0.6 and 1:0.5). Incomplete drug release (about 82% in 12 h) was observed from tablets of batch D1 (Fig. 2). The drug was released over 12 h from the tablets batch D2 containing 1 part of drug and 0.75 parts of the matrixing agent. Time required to release 90% of drug (t90%) was 460 min. Tablets of batches D3 and D4 were not subjected to in vitro drug release since the friability was greater than 1%. Hence, considering the results of friability and in vitro release, batch D2 was ranked as an optimized batch and used for the preparation of bi-layered tablet. The in vitro drug release profi le of the tablets of batch D2 was similar to Voveran® SR (f2=54). The in vitro drug release data of batch D2 was analyzed for establishing kinetics of drug release. The best fit was shown by Korsmeyer-Peppas model with least sum of square of residuals (SSR = 48.7) and Fischer’s ratio (F=8.1).

The bi-layer tablets (batch D5) were prepared by using composition of batches AF4 and D2. The bilayer tablets showed acceptable friability (0.7%) and crushing strength (65 N). High pressure thin layer chromatography (HPTLC) was used to ascertain drug release [4]. The results showed two distinct peaks, one peak of diclofenac sodium at 0.45 Rf value and the other of paracetamol at 0.83 Rf value. Fig. 3 show that more than 85% of paracetamol was released within 20 min from bi-layered tablet whereas diclofenac sodium was released over 12 h with t90% of 495 min.

The bi-layer tablets showed immediate release of paracetamol and modified release (upto 12 h) of diclofenac sodium. The dosage form is patient friendly since the dosing frequency will be reduced. Moreover, the tablets will be easy to swallow, as the tablet weight was less than one gram.