Infectious diseases are most common in developing countries. The infectious bacterial classes are both Gram positive and Gram negative hence, the treatment is necessary with an agent, which have broad spectrum of activity. Cephalosporins possess a wide range of activity against Gram positive and Gram negative bacteria; these are act by inhibiting bacterial cell wall synthesis. Cefixime trihydrate is an orally active third generation cephalosporins [1,2]. Sustained release dosage forms have number of advantages over conventional dosage forms, improved patient convenience due to less frequent dosing, reduction in fluctuation in steady-state levels and therefore better control of disease, maximum utilization of drug enabling reduction in total amount of dose administered [3-5]. The objectives of the present work are to design, formulate and evaluate matrix tablets of cefixime trihydrate for sustained release dosage form. As the effect of sustained release dosage form is relatively more, incorporating the drug in the matrix tablet will prolong the drug release. These are prepared by direct compression method. The matrix tablets of cefixime trihydrate designed using polymers such as hydroxypropyl methylcellulose K5M (HPMC K5M), carboxymethyl cellulose sodium (sodium CMC) and ethyl cellulose (EC) and evaluated for various precompression and post-compression parameters [6,7]. The effect of combination of HPMC K5M and EC, HPMC and sodium CMC, EC and sodium CMC, HPMC, EC and sodium CMC on response parameters like release pattern, cumulative percent release of the drug, drug release mechanism were studied.

The Fourier transform infrared (FTIR) spectra of samples were obtained using FTIR spectrophotometer (Perkin Elmer). Pure drug, individual polymers and optimized formulations were subjected to FTIR study. About 2-3 mg of sample was mixed with dried potassium bromide of equal weight and compressed to form a KBr disk. The samples were scanned from 500 to 4000 cm−1.

Sustained release matrix tablets were prepared by direct compression method as per the formula given in the Table 1. Initially the drug was passed through Sieve #30, all the polymers were passed through Sieve #40 and microcrystalline cellulose and magnesium stearate were passed through Sieve #60. Required quantity of the drug, polymers and diluents were mixed thoroughly. This powder mixture was blended and compressed using a single punch-tableting machine (Cadmach Machinery Co. Pvt. Ltd) with hardness of the tablets maintained between 8-11 kg/cm [8,9].

Hardness or tablet crushing strength is the force required to break a tablet in a diametric compression. Hardness of the tablet was determined using the Monsanto hardness tester (Shreeji Chemicals). The hardness was computed by deducting the initial pressure from the final pressure. Test was performed on six tablets and average was calculated [12]. Weight variation was carried out according to European pharmacopoeia. Twenty tablets were selected at random and average weight was determined. Then individual tablets were weighed and the individual weight was compared with the average weight [12]. Three tablets were selected randomly from each batch and thickness was measured using vernier calipers. The tablet was placed between two arms of the vernier calipers and thickness was measured [12]. The Roche friability test apparatus (Roche Rich Pharma, Mumbai) was used to determine the friability of the tablets. This device chamber revolves at 25 rpm. About 10 tablets were selected randomly, dedusted and weighed. Then they were placed in the drum and rotated 100 times. Then tablets were dedusted again to remove loose dust and were reweighed. The percent loss in weight was calculated, which gave a measure of friability [12].

Ten Tablets were selected randomly, weighed and average weight of the tablet calculated. Tablets were ground individually to a fine powder. Powder equivalent to 280 mg of cefixime trihydrate was transferred to a 100 ml volumetric flask, dissolved in 80 ml of pH 7.2 buffer. The volume was made up to 100 ml with the buffer and filtered through a Whatman filter paper. Absorbance of the sample solution was measured using UV/Vis spectrophotometer (Elico) and concentration of the drug in the sample was calculated [12].

Dissolution data obtained from the above experiments with all formulations was applied to Zero order and First order kinetic Eqns. Zero order as cumulative amount of drug released vs. time and the Zero order Eqn. being C=K0 t, where K0 is the zero-order rate constant expressed in units of concentration/time and t is the time in h. A plot of concentration vs. time would yield a straight line with a slope equal to K0 and intercept the origin of the axes [13]. First order as log cumulative percent of drug remaining vs. time, and the Fisrt order Eqn. being LogC=LogC0− kt/2.303, where C0 is the initial concentration of drug, k is the first order constant, and t is the time [13].

Higuchi’s model, which is cumulative percent drug released vs. square root of time and the Higuchi Eqn. being, Q=K t1/2, where K is the constant reflecting the design variables of the system and t is the time in h. Hence, drug release rate is proportional to the reciprocal of the square root of time [14]. Korsmeyer Peppas Eqns were applied to evaluate the mechanism of drug release from the dosage form, data for the first 60% of drug release were plotted in Korsmeyer et al. proposed Eqn. log cumulative percent drug released vs. log time, and the exponent n was calculated through the slope of the straight line. Mt/M∞=Ktn, where Mt/M∞ is the fractional solute release, t is the release time, K is a kinetic constant characteristic of the drug/polymer system, and n is an exponent that characterizes the mechanism of release of tracers. For cylindrical matrix tablets, if the exponent n=0.45, then the drug release mechanism is Fickian diffusion, and if 0.45<n<0.89, then it is non- Fickian or anomalous diffusion. An exponent value of 0.89 is indicative of Case-II Transport or typical zero-order release [15]. 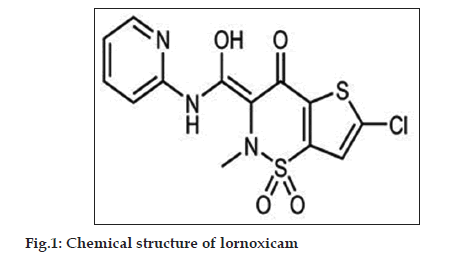 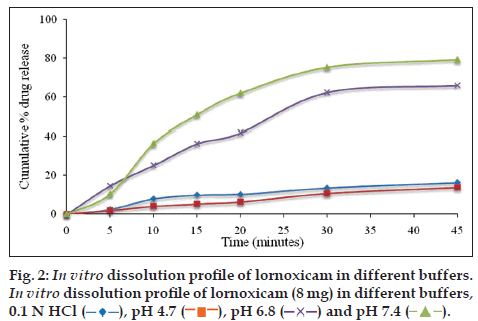 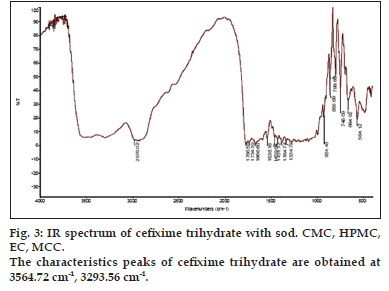 Carr’s index values between 5-15 indicate excellent flow. The results obtained indicates that the powder flow properties were within the pharmacopoeias limits (Table 2). Angle of repose is defined as maximum angle possible between the surface of the pile of powder and the horizontal plane. Angle of repose values obtained ranged from 28.17° to 34.36° which are <35, indicative of good flow properties of granules, and it was observed to be within the pharmacopoeias limits (Table 2).

All values are mean ± standard deviation (SD) for n=3 determinations

All values are mean ± standard deviation (SD) for n=3 determinations

Formulation F5 showed drug release up to 12 h making it the optimal formulation.