Formulation and evaluation of gelatin micropellets of aceclofenac: Effect of process variables on encapsulation efficiency, particle size and drug release

Natural polymer such as gelatin has been extensively used for the preparation of particulate drug delivery systems by virtue of its biocompatibility and biodegradability along with a total absence of toxicity or allergic problems [1]. Being a water soluble polymer, gelatin has to be chemically cross linked to become insoluble at 37°. Aldehyde derivatives such as formaldehyde; glutaraldehyde or other bifunctional reactants have been used to produce insoluble gelatin microspheres [2,3]. In the present study a non-steroidal antiinflammatory drug aceclofenac has been chosen as a model drug [4] (half-life of 4 h) and the effect of various processing parameters such as drug: polymer ratio, temperature of oil phase, amount of gluteraldehyde and stirring time on various physical properties and in vitro drug release were studied. Micropellets were also evaluated for drug polymer interactions by DSC, crystallinity by X-RD and surface structure by scanning electron microscopy (SEM).

The aceclofenac micropellets were prepared by cross linking technique using gelatin polymer. The gelatin (1.0 g) was soaked in 12 ml of distilled water for 15 min. It was then heated on a water bath to 60-65° until it completely dissolved. The drug (1.0 g, previously passed through no. 80 sieve) was added to the gelatin solution with stirring. The drug loaded micropellets were formed by dropping the drug polymer dispersion by a jacketed glass syringe (20 G, provided with hot water supply at 60-65°) in to previously cooled 300 ml sunflower oil (10°, maintained by ice salt freezing mixture) containing 0.5 ml of Span 20 as dispersing agent, with constant stirring at 200 rpm. The gluteraldehyde (25% v/v) solution (1.5 ml) was added after 1 h to crosslink the gelatin, and the stirring was further continued for 2.5 h. The resulting micropellets were decanted, freed of sunflower oil by repeated washings with ice cold isopropyl alcohol (150 ml) and finally air dried over a period of 24 h. Ten batches of aceclofenac micropellets were prepared in triplicate (Table 1) by altering one of the four process variable at a time, keeping the others constant as mentioned above.

The resulting micropellets obtained by above procedure were free flowing in nature as Carr’s index of all formulation lies in the range 4-12 (Table 1). Entrapment efficiency was found to increase by increasing polymer:drug ratio from 1:0.25 to 1:1 (Table 1). The same case was noticed with mean particle size. At higher polymer-drug ratio, large droplets were formed due to increased viscosity of polymeric phase and, hence an increase in the mean particle size. The temperature of the oil phase is one of the important process parameters, as good entrapment efficiency was found at low temperature (10°), which also contributed to hardness of micropellets. A sharp endothermic (Tpeak=153.670) was observed for aceclofenac at the room temperature corresponding to its melting point 150-1580 (fig. 1). In case of gelatin, exothermic peak was observed in the temperature range of 200-2500. The characteristic, well-recognizable thermal profile of the drug appeared at the temperature corresponding to its melting point in the aceclofenac gelatin micropellets showing thermal peak at 151.900 but with the loss of its sharp appearance. It appears that there is a significant reduction of drug crystallinity in the polymer matrix. The X-ray powder diffraction patterns of pure drug and formulation containing aceclofenac (fig. 2) reveals that the intensity of the peaks for the pure drug was sharp, but when it was incorporated into the polymer matrix, the drug peaks showed a loss of sharpness due to decreased crystallinity of the drug. SEM of drug-loaded micropellets revealed that the micropellets were spherical in shape. The drug release from micropellets prepared at lower drug: polymer ratios was faster than that of micropellets prepared at higher drug-polymer ratios because of the small size of the micropellets at lower drug: polymer ratios, which provided a large surface area for faster drug release (data not shown). Micropellets prepared at 60° showed faster drug release than the micropellets prepared at 10° as shown in (fig. 3). This result may be accredited to the deterioration of the micropellet wall by gluteraldehyde at higher temperature, which may lead to rapid release of drug with initial burst effect. It was found that increase in amount of cross linking agent decreases the release time. This result may be attributed to the higher degree of cross linking of gelatin at higher gluteraldehyde concentration, which retarded drug release from the pellets (fig.3). The micropellets treated with gluteraldehyde for a longer period of time showed slower drug release as compared to micropellets treated for a shorter period of time as evident from (fig. 3). This may be due to improvement in hardness of micropellets at longer exposure time. 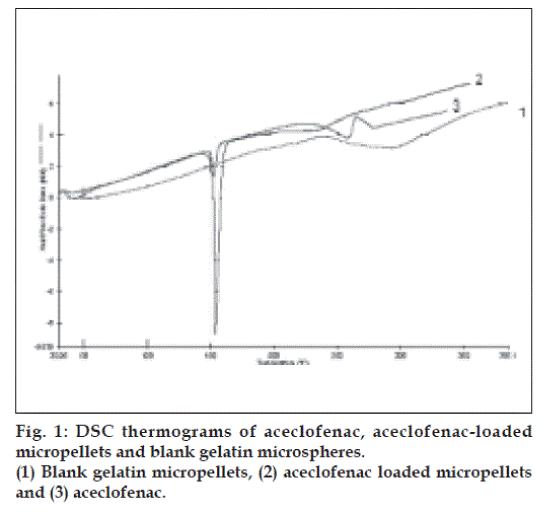 The authors are thankful to IPCA Ltd., Mumbai, India, for supply of aceclofenac as a gift and Indian Institute of Technology (IIT), Kharagpur, India, for providing necessary facilities to carry out characterization studies.