Formulation and evaluation of ornidazole dental implants for periodontitis

Dental implant is a pharmaceutical device in the form of strip with very small loading and size of 0.25 sq cm. For site-specific one-time continuous delivery of ornidazole an antimicrobial compound with excellent activity against anaerobic micro-organism in the treatment of periodontal disease was prepared by solvent casting technique using ethyl cellulose, hydroxypropylcellulose, hydroxypropylmethylcellulose K4M and Eudragit RL-100 with dibutylphthalate as plasticizer. The physicochemical parameters like thickness, weight variation, content uniformity and release characteristics were evaluated The drug release was initially high on day one to achieve immediate therapeutic level of drug in pocket, followed by marked fall in release by day two, and progressive moderate release profile to maintain therapeutic level following anomalous transport mechanism. Formulation V6 released 97.07% of drug at the end of 120 h and was considered as best formulation. In vitro antibacterial activity was carried out on Streptococcus mutans.

Periodontal disease can and does occur in all groups, ethnicities, races, genders and socioeconomic levels. Periodontitis is a disease associated with periodontium in which irreversible step of loss of attachment occurs[1]. Periodontitis develops in specific site; it does not occur in everyone with uncontrolled dental plaque, on all the teeth of susceptible or on all the surfaces of these teeth. Supportive periodontal therapy such as scaling, root planning and surgeries are common methods of treatment. Reoccurrence is not uncommon, even in well-maintained root planning and daily oral hygiene practice. The risk of systemic side effects and development of bacterial resistance can also be important disadvantage of using systemic antibiotics. Topical applications with mouth washes, dentifrices and gels follow an exponential concentration profile, while blood and crevicular fluid levels remains at zero and fail to penetrate deep into periodontal pockets. Consequently, the high flow rate of GCF will cause a fast evacuation of the already released drug from the pocket to the mouth, thereby depleting the concentration of the drug in the pocket. Therefore, the rate of release should be higher at the initial stage of release, to achieve an immediate therapeutic level of drug in the pocket. The next stage should maintain therapeutic level, and moderate release profile is required. The average depth of a pocket is between 6 and 8 mm; therefore, the therapeutic drug device cannot be large. The present study was aimed to formulate site-specific controlled release dental implants for the treatment of periodontal diseases. The various pharmaceutical parameters like compatibility, stability, drug release characteristics and in vitro antibacterial activity on streptococcus mutans of dental implants are evaluated. In addition, the patients’ acceptability for the delivery device was reported[2].

Method used for the preparation of dental implants was solvent casting technique[3] using chloroform and dichloromethane (1:1) mixture. A total of six formulations were designed, Table 1 shows composition of cast films for each dental implant. Dental implants were prepared by dissolving ethyl cellulose and copolymer HPC or HPMC [K4M] alone and in combination in chloroform and dichloromethane (1:1) mixture, dibutylphthalate (50% v/w of that of polymer) as a plasticizer using magnetic stirrer in a closed beaker to get different concentrations of each polymer. Consequently, polymer ethycellulose and copolymer Eudragit RL 100 were dissolved in chloroform alone, containing diabutylphthalate 50% and 15% v/w of that of polymer respectively as a plasticizer. Into this, Ornidazole of required concentration was added. After complete mixing 10 ml solution was poured in a clean Petri dish (Anumbra® area 60.8 sq cm approximately) placed on a horizontal plane. The solvent was allowed to evaporate slowly by inverting a glass funnel with a cotton plug closed in the stem of the funnel on Petri dish at 24° for 24 h. After complete evaporation of solvent, cast films were obtained. Cast films were then cut into pieces of 0.5×0.5 cm and wrapped in an aluminium foil and stored in desiccators at relative humility at room temperature in a dark place until further use. Each film contained 1 mg of drug.

#Based on dry powder weight. In each of the formulations 10 ml of chloroform: dichloromethane (1:1) mixture and chloroform alone in V6. From this solution 10 ml is poured into Anumbra® Petridish to prepare a cast film.

Folding endurance of the film was determined by repeatedly folding a small strip of film of 2×2 cm size at the same place till it broke. Tensile strength of the films was noted on an Instron apparatus[4] using a film strip of 4×1 cm.

Content uniformity[6] was noted by dissolving three implants individually in 10 ml dichloromethane. This was extracted with two successive quantities, each of 10 ml of isotonic phosphate buffered saline pH 7.2, in a separating funnel. The aqueous phases were separated and absorbance was determined at 316 nm for ornidazole after suitable dilution using Shimadzu UV/Vis spectrophotometer. The extract of implants without drug was served as blank. Values are recorded in Table 1.

In vitro release was performed by taking five implants with the drug (separate formulations) in a vial containing 1 ml of isotonic phosphate buffered saline (IPBS). One millilitre of the IPBS was withdrawn from 1st to 6th d and immediately replaced with 1 ml fresh IPBS. The drug content was estimated by measuring the absorbance after suitable dilutions at 316 nm.

In vitro antibacterial activity[8,9] was performed on all formulations by placing the film, cut into 0.5×0.5 sq cm, on chocolate agar plates seeded with the oral bacteria Streptococcus mutans. After 48 h of incubation at 37°, the films were transferred onto freshly seeded agar plates for an additional 48 h for incubation. This procedure was repeated until no inhibition of bacterial growth was detected on the agar plate. The growth inhibition area on the agar plate was measured.

In vitro release studies performed using IPBS showed an initial burst release, Fig. 1, which is expected to kill most of the periodontal organism, followed by controlled release for about 5 d, sufficient to inhibit the growth of the micro-organisms. 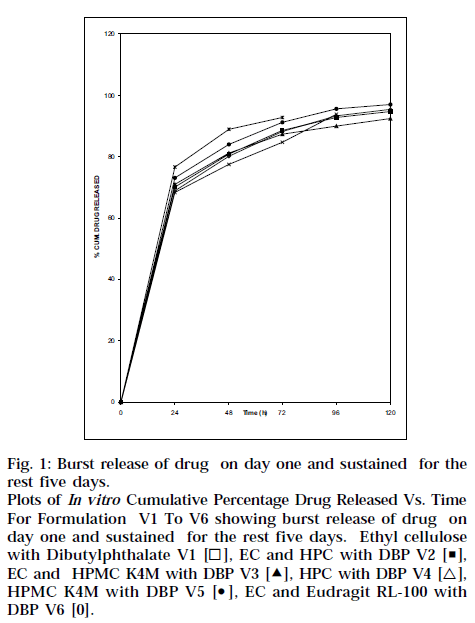 Dental implants made of HPMC K4M and ethyl cellulose (V3) is better than others because the extent of release was maintained for about 5 d. All the formulations showed initial burst release and controlled release in later phases, as shown in Fig. 1. Higher drug release from strip V1, V2, V3 and V6 showed 95.4, 94.7, 92.5 and 97.1% respectively. This might be due to formation of more pores and channels due to higher EC content. As HPMC K4M and HPC polymer act as resorbable carriers, they dissolved readily during in vitro drug release as well as in vitro antibacterial activity after 72 and 96 h respectively. Table 3 shows cumulative amount of drug released, and ‘r’ value is coefficient of correlation and ‘n’ value is higuchian diffusion. The Peppas model was found to be linear with the correlation coefficient values of 0.9450, 0.9970, 0.9916, 0.9616, 0.9794 and 0.9968 for formulation V1, V2, V3, V4, V5 and V6, respectively. The “n” value of the various mathematical model fittings suggests that all the films exhibit anomalous transport, as shown in Table 3. In vitro antibacterial activity demonstrated significant antibacterial profile of all the formulations, as shown in Fig. 2. In order to see whether the drug release is by diffusion, swelling or erosion mechanism, correlation values of various mathematical models were taken and compared as shown in Table 3. The Peppas values were found to be linear with correlation coefficient, indicating release of ornidazole from dental implants to be diffusion controlled. The ‘n’ values suggest that all the films exhibit anomalous transport 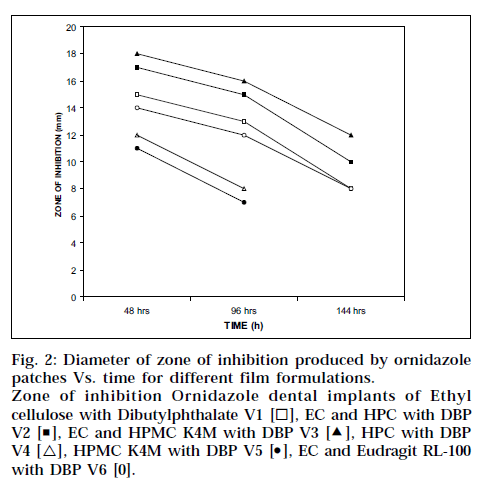 Compatability study was done by using IR Spectroscopy of drug alone and in combination with the individual polymer. Stability studies were conducted on implants at room temperature and exposure to direct sunlight for one month. The drug content reduced markedly after exposing to direct sunlight. The stability of drug was improved by formulating them in polymer matrix.

The authors are thankful to Zydus Cadila Health Care Ltd, Ahmedabad, for supplying free gift sample of drug, and to K. L. E. Society’s College of Pharmacy, Belgaum, for providing necessary facilities to conduct the work.