Floating tablets of carbamazepine were developed using melt granulation technique. Bees wax was used as a hydrophobic meltable material. Hydroxypropylmethylcellulose, sodium bicarbonate and ethyl cellulose were used as matrixing agent, gas-generating agent and floating enhancer, respectively. The tablets were evaluated for in vitro buoyancy and dissolution studies. A simplex lattice design was applied to investigate the combined effect of 3 formulation variables i.e. amount of hydroxypropyl methylcellulose ( X 1 ), ethyl cellulose ( X 2 ) and sodium bicarbonate ( X 3 ). The floating lag time (F lag ), time required for 50% (t 50 ) and 80% drug dissolution (t 80 ) were taken as responses. Results of multiple regression analysis indicated that, low level of X 1 and X 2 , and high level of X 3 should be used to manufacture the tablet formulation with desired in vitro floating time and dissolution. Formulations developed using simplex lattice design were fitted to various kinetic models for drug release. Formulation S3 was selected as a promising formulation and was found stable at 40 o and 75% relative humidity for 3 months. Present study demonstrates the use of simplex lattice design in the development of floating tablets with minimum experimentation.

Several approaches are currently used to retain the dosage form in the stomach. These include bioadhesive systems [3], swelling and expanding systems [4,5], floating systems [6,7] and other delayed gastric emptying devices [8,9]. The principle of floating preparation offers a simple and practical approach to achieve increased gastric residence time for the dosage form and sustained drug release.

Carbamazepine (CBZ) is used for anticonvulsant and antineuralgic effects. The popularity of this drug is related to several beneficial properties, including, proven efficacy in controlling different types of seizures. It is poorly soluble in water with erratic oral absorption and bioavailability less than 70%. Moreover CBZ has a narrow therapeutic range and shows bioavailability differences [10]. In efforts to reduce the frequency of dosing required for chronic CBZ therapy and to decrease variability in plasma concentration, various extended release formulations have been developed by many researchers [11-13]. Preparing the drug in a floating dosage form can control the extent of bioavailability for such poorly water-soluble drug. The objective of the present investigation is to develop floating tablets containing carbamazepine using simplex lattice design as an optimization technique.

Bees wax was melted in a large petridish and the required quantity of CBZ was added to the molten mass. Previously prepared geometric mixture of HPMC K4 M and/or EC and sodium bicarbonate was added to the molten CBZ-bees wax mixture and stirred well to mix. The mass was removed from the hot plate and subjected to scrapping until it attained room temperature. The coherent mass was passed through 60 mesh and the resulting granules were resifted using100 mesh to separate the fines. The granules (50 g) of 60/100 mesh were collected and mixed with talc (2%) and magnesium stearate (1%). This lubricated blend was compressed into tablets using 12 mm flat face round tooling on a Rimek-I rotary tablet machine (Karnavati Eng. Pvt. Ltd, Ahmedabad). Compression force was adjusted to obtain tablets with hardness in range of 5-6 kg/cm2. Tablets were weighing 515±4 mg round flat face with average diameter of 12±0.1 mm and thickness of 4.6±0.2 mm. Formulations of the preliminary trial batches (P1 to P7) and the simplex lattice design batches (S1 to S7) are shown in Tables 1 and 2, respectively.

Table 2: Formulation and evaluation of batches in simplex lattice design A simplex lattice design [15] was adopted to optimize the formulation variables. In this design, three factors were evaluated by changing their concentrations simultaneously and keeping their total concentration constant. The simplex lattice design for three- component system is represented by an equilateral triangle (fig. 2) in two-dimensional space. Seven batches (S1 to S7) were prepared, one at each vertex (A, B, C), one at half way between vertices (AB, BC, AC) and one at the center point (ABC). Each vertex represents, a formulation containing the maximum amount of one component, with the other two components at a minimum level. The half way between the two vertices represents, a formulation containing the average of the minimum and maximum amount of the two ingredients represented by two vertices. The center point represents, a formulation containing one third of each ingredient. The amounts of matrixing agent, HPMC K4 M (X1), gas-generating agent, sodium bicarbonate (X2) and floating enhancer, EC (X3), were selected as independent variables. The floating lag time (Flag), time required for 50% (t50) and 80% drug dissolution (t80) were taken as responses. 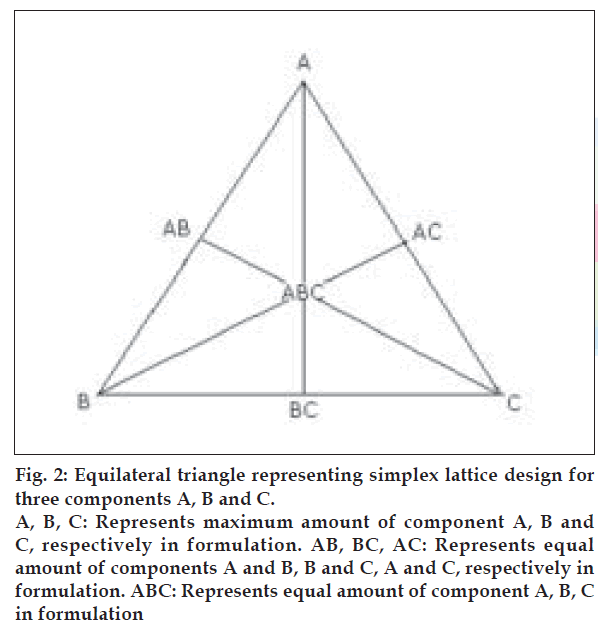 The dissolution profile of all the batches was fitted to various models like zero-order, first-order [16], Higuchi [17], Hixon-Crowell [18], Korsmeyer and Peppas [19-21] and Weibull models [22-24] to ascertain the kinetic modeling of drug release. The method of Bamba et al, was adopted for deciding the most appropriate model [25].

Bees wax was selected as a hydrophobic meltable material to impart sufficient integrity to the tablets. HPMC K4 M was selected as a matrixing agent considering its widespread applicability and excellent gelling activity in sustained release formulations. Sodium bicarbonate generates CO2 gas in the presence of hydrochloric acid present in dissolution medium. The gas generated is trapped and protected within the gel formed by hydration of HPMC K4 M, thus decreasing the density of the tablet. As the density of the tablet falls below 1 (density of water), the tablet becomes buoyant. EC was used as floating enhancer. It also works as a dissolution retardant being insoluble in gastric pH. Five batches (P1 to P5) were prepared using same amounts of sodium bicarbonate and bees wax while different amounts of HPMC K4 M and EC. The amount of HPMC K4 M was decreased while EC was increased from batch P1 to P5. From the evaluation results (Table 1), it was observed that as the amount of EC was increased from 0% to 25%, Flag was decreased and this effect was significant on reducing Flag up to 10% of EC. Hence it was decided to optimize the amount of EC in between 0% and 10%. As the amount of HPMC K4 M was increased from 20% to 45%, the Flag was increased indicating that high amount of HPMC K4 M is undesirable to achieve low Flag. Below 25%, HPMC K4 M might not give sufficient strength to the matrix to prolong drug release up to 12 h. Hence, it was decided to optimize HPMC K4 M in between 25% and 35%. Formulations P1 to P5 were subjected to in vitro dissolution study. All the tablets ruptured within 3 h with more than 80% drug release. This might be due to poor strength of tablets or due to insufficient binding provided by bees wax that failed to keep the matrix intact. Formulations P6 and P7 were prepared using 15% and 20% of bees wax, respectively. These were found to remain intact for more than 12 h under stirring at 75 rpm during dissolution studies. Formulation P7 exhibited floating lag time of 325 s. This might be due to poor penetration of SGF in a tablet core due to high amount of bees wax. Hence it was decided to keep the bees wax at 15%. It is well known that higher percentage of sodium bicarbonate decreases the Flag. So it was decided to optimize sodium bicarbonate between 10% and 20% to keep the Flag below 3 min. In order to optimize the formulation for acceptance criteria of Flag, less than 3 min; t50, in between 300 and 420 min; and t80, in between 540 and 600 min; a simplex lattice design was employed in the present investigation.

All the simplex lattice design batches showed good in vitro buoyancy with maximum floating lag time of 255 s. All the tablet formulations remained buoyant for more than 12 h in SGF, pH 1.2. In vitro buoyancy study was also conducted at an elevated pH condition (pH 4.5). The floating tendency of all the formulations remained unaltered at higher pH.

The dissolution data of batches S1 to S7 was fitted to zero-order, first-order, Higuchi, Hixon-Crowell, Korsmeyer and Peppas, and Weibull models. The method of Bamba et al was adopted for deciding the most appropriate model. The results of F-statistics were used to select the most appropriate model. The release profile of promising batch, S3, fitted best to zero-order model (F= 23.64). This superiority is statistically insignificant with the Korsmeyer and Peppas model (F= 41.81) as well as Weibull model (F= 26.54) as shown by the goodness-of-fit test (F ratio test). But priority should be given to the model with the lowest F value. Thus, it may be concluded that drug release from floating CBZ tablets is best explained by zero order model. The other simplex lattice design batches also followed zero order model with either significant or insignificant difference with the other models.

The factorial batches were subjected to short-term stability studies at 40o and 75% RH for three mo. Samples withdrawn after three mo showed no significant change in appearance of the tablets, floating lag time and in vitro drug release.

Based on the results it was concluded that the addition of matrixing polymer, HPMC K4 M, and gas generating agent, sodium bicarbonate was essential to achieve in vitro buoyancy. A systematic study using a simplex lattice design revealed that the amount of HPMC K4 M, sodium bicarbonate and EC had a significant effect on Flag, t50 and t80. Thus, by selecting a proper optimization technique, proper balance of formulation variables can be achieved rapidly with minimum efforts to produce required in vitro buoyancy and drug dissolution profile.