Formulation development and evaluation of fast dissolving film of telmisartan

Hypertension is a major cause of concern not just in the elderly but also in the youngsters. An effort was made to formulate a fast dissolving film containing telmisartan which is used in the treatment of hypertension with a view to improve the onset of action, therapeutic efficacy, patient compliance and convenience. The major challenge in formulation of oral films of telmisatran is that it shows very less solubility in the pH range of 3–9. Various film forming agents and polyhydric alcohols were evaluated for optimizing composition of fast dissolving films. Fast dissolving films using hydroxypropyl methylcellulose, polyvinyl alcohol, glycerol, sorbitol, menthol and an alkalizer were formulated using solvent casting method. Optimized formulations were evaluated for their weight, thickness, folding endurance, appearance, tensile strength, disintegration time and dissolution profile.

Rapidly dissolving or quick dissolving dosage forms have acquired great importance in the pharmaceutical industry due to their unique properties and advantages [1,2]. They undergo disintegration in the salivary fluids of the oral cavity within a minute, where they release the active pharmaceutical ingredient. The major amount of the active pharmaceutical ingredient is swallowed orally with the saliva where subsequent absorption takes place in the gastrointestinal tract [3,4]. The rapidly dissolving dosage forms are referred by various names by researchers like quick disintegrating, orally disintegrating, mouth dissolve or melt in mouth dosage forms [1,3,4]. These dosage forms possess certain specific advantages like no need of water for disintegration, accurate dosing, rapid onset of action, ease of transportability, ease of handling, pleasant taste and improved patient compliance.

Telmisartan (TLM) is an antihypertensive agent which is a nonpeptide angiotensin receptor ΙΙ antagonist, that cause inhibition of the action of angiotensin II on vascular smooth muscle in the symptomatic treatment of hypertension [5,6]. The major drawback of this drug is its low aqueous solubility. It is insoluble in water and hence the drug may be slowly or incompletely dissolved in the gastro intestinal tract. The bioavailability of TLM is poor about 45%, which is due to extensive first pass hepatic metabolism.

The available formulation of TLM in market is an immediate release tablet. Conventional TLM tablets are not suitable where quick onset of action is required. To provide the patients with the most convenient mode of administration, there is a need to develop rapidly dissolving dosage form, particularly one that disintegrates and dissolves/ disperses in saliva and can be administered without need of water. Fast dissolving films are useful in patients such as paediatric, geriatric, bedridden, or developmentally disable who may face difficulty in swallowing conventional tablets. So the patients would be benefited from acute treatment by using proposed drug delivery system. Thus, a fast dissolving film is a unique solid oral dosage form and has valuable advantages [7].

Screening of the components for formulation of placebo fast dissolving films

HPMC is known for its good film forming properties and has excellent acceptability. Hence, various grades of HPMC namely Methocel E3, Methocel E5 and Methocel E15 Premium LV were evaluated as film formers. For the fabrication of films, glycerin was used as a humectant. PVA is also reported as film former with moisture barrier ability. Therefore PVA along with glycerol was also used for placebo films. Apart from these film formers, polyvinyl pyrrolidone 30, polyvinyl pyrrolidone 90, kollicoat IR, copovidone alone or in combination with each other along with plasticizers like lutrol E400 were tried. The composition of various placebo films is given in Table 1. The films were prepared by solvent−casting method. The polymer was soaked in water for 30 min or heated in water bath to 80º to get a clear solution. Then a plasticizer was added to it and mixed so as to get homogeneous solution. This solution was then casted onto a glass petridish (9.6 mm in diameter) and was dried in hot air oven at 45° for 24 h. The films were evaluated for imperfections, peelability without rupturing, surface roughness, appearance and in vitro disintegration time as shown in Table 2. Optimization was further performed for the polymer and plasticizer compositions which showed good film properties. These are shown in Table 3.

All values are expressed in %w/v. HPMC is hydroxypropyl methylcellulose, PVA is polyvinyl alcohol

Table 3: Optimization Of Quantity Of Pva, Hpmc And Plasticizer

HPMC was weighed and soaked for 30 min while PVA was heated to 80º to obtain a clear solution. Glycerol and sorbitol were added to each of these solutions and mixed well. Specified amount of menthol and sucralose which were previously dissolved in very small amount of ethanol and water, respectively were added to above polymer solutions. TLM was dissolved in potassium hydroxide solution, added to the above formulation and stirred to get a uniform distribution. The films were casted on perti dishes and allowed to dry at 45º for 24 h. They were further peeled and cut into 3×3 cm2 area. Films K3 and K4 were further evaluated.

The thickness of the film was evaluated using calibrated vernier caliper (Mitutoyo, Japan). The sample equivalent to dose of the drug was taken. Anvil of the thickness gage was lifted and the film was inserted after making sure that pointer was set to zero. The film was held on the anvil and the reading on the dial was noted down. The thickness was measured at three different positions. The average of six readings was taken as mean thickness.

For weight variation, the films of size 3×3 cm2 which includes dose of drug were cut and weighed on analytical balance (Shimadzu Corporation Japan AUX 220). For content uniformity test, the films of size 3×3 cm2 were cut from different positions of casted film. Each film of 9 cm2 was placed in volumetric flask containing 60 ml of 0.1 N hydrochloric acid and was sonicated for 15 min using ultrasonicator. The volume was made upto 100 ml and the absorbance of solution was measured by UV spectrophotometer at 296 nm after appropriate dilutions.

The folding endurance is expressed as the number of folds required to break the specimen or to develop visible cracks. This gives the indication of brittleness of the film. It was measured manually for the prepared film for the area 3×3 cm2. Film of specified area was subjected to this test by folding the film repeatedly at the same plane for several times till visible cracks developed.

In vitro disintegration test and pH

Disintegration test was performed by placing the film of size 3×3 cm2 in the glass Petri dish containing 20 ml of water. It was stirred at every 10 s time interval. The time required for the film to disintegrate was recorded and results are expressed as mean of 6 determinations. The pH of the film was measured by dissolving 3×3 cm2 film in 4 ml of water, using a calibrated pH meter.

Mechanical properties of the film are important from packaging point of view. Tensile test was performed to assess strength and elasticity of optimized film formulation. The elongation−to−break (also called ultimate elongation) is the strain on a material when it breaks and it gives an indication of toughness and stretch−ability prior to breakage. These parameters dictate the end−use handling properties and mechanical performance of the films. This quality control test was adapted from the textile industry (Star tensile tester). Casted film was cut into specimens of the size specified in Table 5. The thickness of the specimens was determined by standard micrometer screw gauge. Then 5 specimens were applied on tensile tester to determine the tensile properties. The tensile stress is expressed in terms of MPa and strain in terms of % elongation. Tensile strength = (Load at failure×100) / (Strip thickness × Strip width) and % Elongation = (Increase in length of strip × 100) /Initial length of strip.

DSC thermograms of TLM and TLM containing films (only K3) were recorded on a thermal analyzer (DSC, Q200, VA 24.2). The samples were heated from 30° to 300° at a heating rate of 10°/min in an inert nitrogen atmosphere.

The dissolution medium selected was pH 7.5 phosphate buffer which is a media specified for TLM tablets as per FDA OGD guidelines (900 ml, 75 rpm maintained at 37±0.5°). At predetermined time intervals, 5 ml aliquots of samples were taken and same volume of buffer was replenished. Absorbance was measured at 296 nm after appropriate dilutions. The results are expressed as mean of 3 determinations. Apart from this, multimedia dissolution study was performed in phosphate buffer pH 4.5, 6.4 and in 0.1 N hydrochloric acid.

Based on film forming capacity, appearance and disintegration time HPMC 5 cps and PVA were selected as film forming agents. Placebo film containing PVA gave most desired properties at concentration 2.75% of PVA polymer with 0.375% of glycerol as a plasticizer. Placebo film containing HPMC E5 gave most desired properties at concentration 2.85% with 0.71% of glycerol.

Since TLM is insoluble between the pH of 3–7, hence an attempt was made to increase the solubility of TLM by use of alkalizers like sodium hydroxide and potassium hydroxide as used by the innovator of TLM tablets namely Micardis®.

In trial K1 drug was just dispersed in polymer solution, where as for trial K2, combination of sodium hydroxide and tween 80 was used. As both these trials did not show satisfactory dissolution profile, trials K3 and K4 were further taken by use of potassium hydroxide as an alkalizer to solubilize the drug. To mask the slight salty/alkaline taste imparted by potassium hydroxide in trial K3 and K4; the concentration of sucralose was increased and menthol was incorporated as coolant. The incorporation of potassium hydroxide did not adversely affect appearance, peelablity and flexibility of the film. PVA film of formulation K3 was found to be clearer and more transparent as compared to HPMC film formulation K4. The pH of the film was found to be around 7–8. 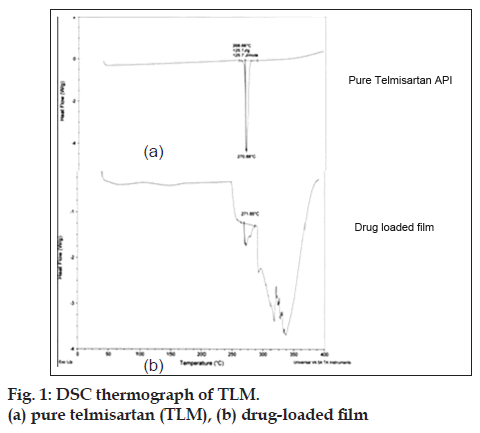 The values are expressed as mean±SD 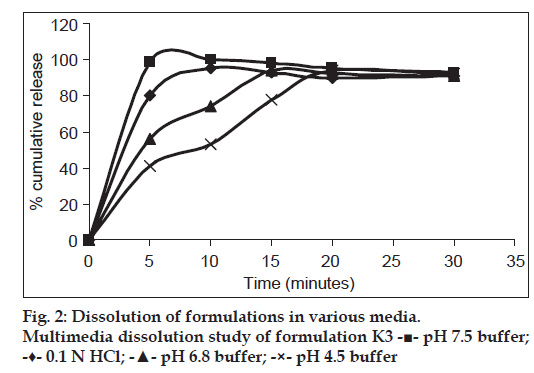 Fast dissolving film of telmisartan was formulated satisfactorily. It showed a good dissolution profile along with elegant appearance and other physical characteristics like tensile strength, % elongation, folding endurance. Therefore it can be a good alternative to conventional telmisartan tablets.