Indomethacin, 1-(4-chlorobenzoyl)-5-methoxy-2- methylindol-3-yl-acetic acid [1] a potent nonsteroidal antiinflammatory agent (NSAIA), has been used effectively in the management of moderate to severe rheumatoid arthritis, ankylosing spondilytis, osteoarthritis and acute gouty arthritis [2-4]. Like other NSAIAs, indomethacin causes irritation, nausea, anorexia, gastric bleeding and diarrhea when given orally [5]. Consequently, an alternate route of administration to avoid or minimize the above side effects is preferred in form of suppositories.

Indomethacin was purchased from Alkem Laboratories Limited, Mumbai and polyethylene glycols were purchased from S. D. Fine Chemicals Ltd., Boisar. Mayol and Hydrokote AP-5 were procured from M/S Subhash Chemicals Industries, Pune. All other chemicals were of the analytical grade and used as procured.

The displacement values for all suppository bases (Table 1) were first determined6. Twelve formulae were devised using water-soluble and oil soluble suppository bases. Tween-80 was incorporated in the formulation to enhance the release of the drug from the formulation [7]. Out of twelve suppositories best seven suppositories were selected for further studies on the basis of physical characteristics. Suppositories were made by the moulding method [8]. Accurately weighed amount of the respective bases were melted on the water bath and maintained at 55°. The finely divided drug powder was then added to the melted mass and thoroughly mixed. The melt was then poured into the 1 g suppositories moulds and set aside for cooling for 15 min. The suppositories formed were taken out from the moulds and stored in refrigerator.

Indomethacin, practically insoluble in water, is soluble in equal mixture of phosphate buffer pH 7.2 and methanol [9]. Three randomly selected suppositories were taken in 1000 ml standard flask containing 100 ml mixture of phosphate buffer pH 7.2 and methanol (50:50).The flask was shaken for desired period of time to dissolve the drug from suppositories. Absorbance of the resulting solutions after appropriate dilutions was measured on Shimadzu 160 A double beam UV/ Vis spectrophotometer at 320 nm against the blank prepared using respective suppositories without drug (Table 2).

Liquefaction time of the suppositories was determined by modified Krowczynski method [10], which is complementary to the determination of melting point. The apparatus measures the time necessary for a suppository to liquefy under pressure similar to those found in the rectum in the presence of water at body temperature. A glass tube with a stricture was filled with distilled water to adjust below the mark of stricture and heated in water bath to a temperature of 37±0.5°. A suppository was introduced in the tube and carefully pushed down its length until it sets on the top of stricture with the help of glass rod. The glass rod was continued to rest of the suppository till it reached the stricture due to the melting of suppository. The time taken by the glass rod to reach the stricture was determined as the liquefaction time of the suppository (Table 2).

Disintegration time of the suppositories was determined on Electrodes disintegration tester USPED 2L. Six suppositories were weighed individually and placed in the tubes, which were then immersed in the beaker containing 900 ml of phosphate buffer pH 6.8 and instrument was run for 90 min at 37±0.5° (Table 2).

In vitro release study was performed by using USP type1 rotating basket apparatus (Electrolab TDP-06P) and modified continuous flow through bead-bed apparatus (fabricated in the laboratory [[11]). In the first method, dissolution medium was 500 ml mixed phosphate buffer pH 7.8. Rotation speed was controlled at 120 rpm while temperature was maintained at 37±0.5°. In the latter method, release studies were performed by using three rows of glass beads (chemical resistant, 3.5-4.5 mm in diameter) placed in release chamber. The suppository was inserted into the centre of the chamber using stainless steel forceps. The remaining glass beads were poured over the suppository. The mixed phosphate buffer (pH 7.8) was used as the dissolution medium, added in the reservoir and the peristaltic pump was started in the reverse direction allowing the fluid to fill the release chamber from the bottom. As soon as the entire release chamber was filled with dissolution medium the flow was reversed so that the liquid moves from the top to bottom of the chamber. The reservoir was insulated with polystyrene and stirred using magnetic stirrer. Dissolution fluid was maintained at temperature of 37±0.5° and flow rate of the dissolution medium was maintained at 16 ml/min. Five milliliter aliquots of the dissolution fluid were withdrawn at specified interval from the reservoir and each time replaced with equal volume of fresh dissolution medium. Withdrawn samples were suitably diluted and analyzed using Shimadzu 160A double beam UV/Vis spectrophotometer at 320 nm. All measurements were done in triplicate (figs. 1 and 2). 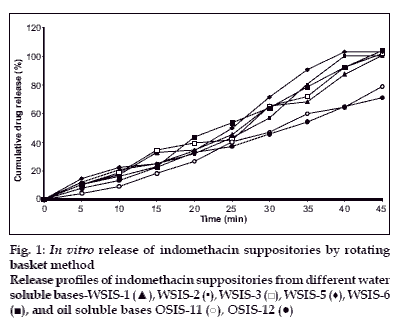 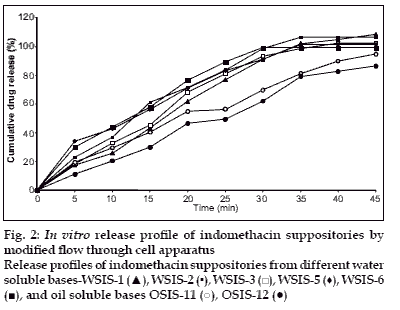