Standards of paracetamol (250 mg) and valdecoxib (10 mg) were weighed accurately and transferred to a 100 ml volumetric flask. This was used as standard stock solution. The drugs were dissolved and diluted up to the mark with ethanol. The tablets containing 500 mg of paracetamol and 20 mg of valdecoxib were weighed and finely powdered. The powder equivalent to 10 mg of valdecoxib and 250 mg of paracetamol was transferred to a 100 ml volumetric flask and dissolved with small portion of ethanol and shaken properly. Then the volume was made with the same and the solution was filtered through Whatmann filter paper.

*Average of six determinations. Tablet contains 500 mg of paracetamol and 20 mg of valdecoxib

Table 1: Results of the marketed tablets

The method was validated by establishing linearity, accuracy, inter day and intra day precision, repeatability of measurement of peak area as well as repeatability of sample application. The limit of detection and limit of quantification were also determined. 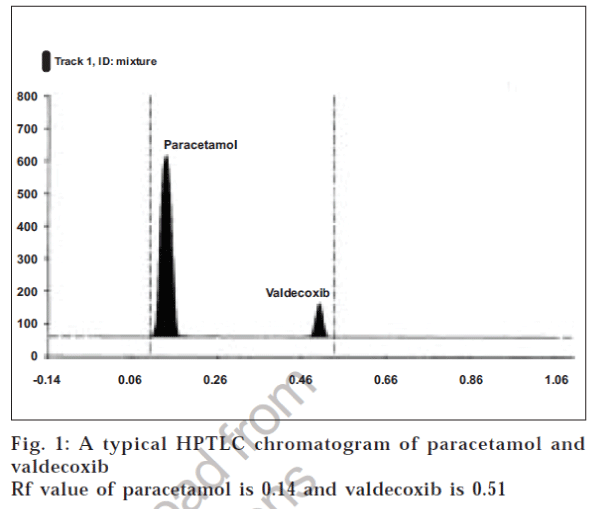 The authors thank M/s SNR and sons charitable Trust, Coimbatore for providing facilities to carry out the work.